First things first: Thanks to all who flew in to the EAA Oshkosh 50th anniversary fly-in! And thank you Tim Aanerud for these photos of the various Zeniths spread out among thousands of other planes at Oshkosh! (Please send me pics of any planes we may have missed) 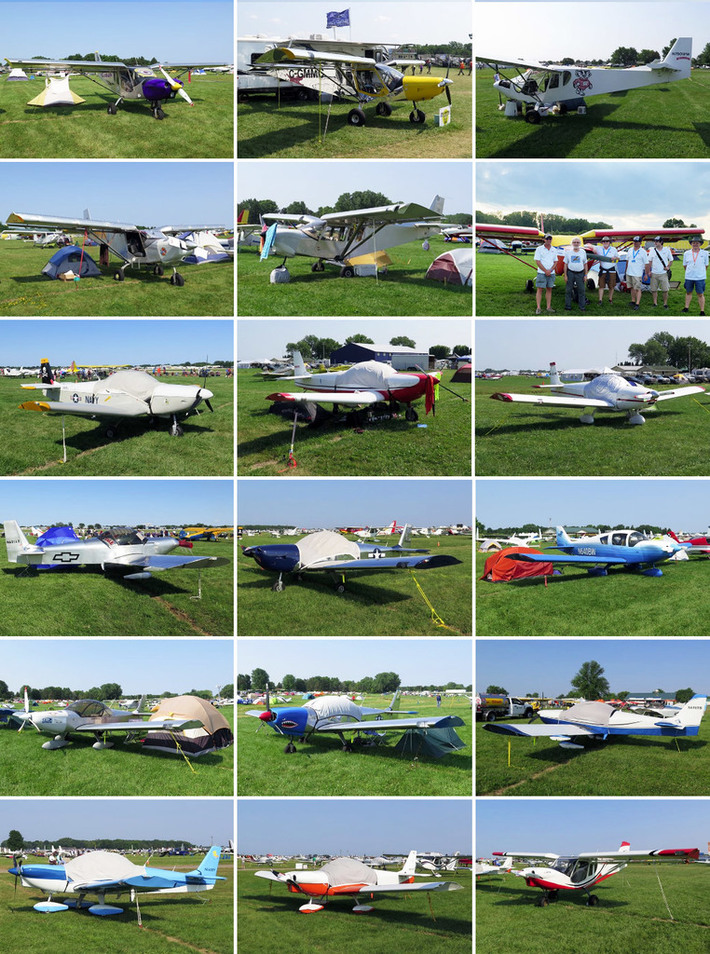 Our annual Oshkosh experience always starts with the flight to Oshkosh, culminating with the arrival at Oshkosh (which can be quite the experience in and of itself!). Below, crossing the Mississippi River into Illinois, over Hannibal, Missouri (hometown of Mark Twain):

This year's flight to Oshkosh was uneventful and nearly anticlimactic. We flew up on Saturday, making the 400 mile trip to Wisconsin in good time with tailwinds. Roger and Steve flew up in the Zenith STOL CH 750 Super Duty and I flew solo in the CH 750 Cruzer. We were joined at the factory in Mexico by Fred Williams, who was flying his beautiful CH 750 Cruzer to Oshkosh for the first time from Paris, Texas (pictured below right, where we stopped for lunch in Rockfalls, IL).

We were greeted by lines of storms in Wisconsin forcing us to first land at Dodge County Airport, then Fond du Lac Airport, before making it in to Oshkosh. Below, tied down before the storm at Dodge County (Juneau, WI).

Our first attempt trying to fly into Oshkosh. We diverted to Fond du Lac to wait out this storm. Check out those clouds!

Oshkosh itself was closed to most incoming traffic because the grounds were saturated with water and only planes with "tundra tires" or pre-arranged hard-surface parking were allowed to land. Below, I took this photo from the Cruzer of Roger on short final for runway 36R (aka taxiway) in the CH750SD. Notice the wet grounds after the numerous rain showers:

Fortunately we were allowed in (flying straight in from Fond du Lac), and as you can see in the video, the arrival lacked the excitement of typical Oshkosh arrivals.

The Oshkosh grounds were saturated in water, especially at the Zenith booth (which was on new sod located just south in the "new" Homebuilt / North Aircraft display area): My brother Nick was flying in from Canada and planning to fly up to Oshkosh with us in the demonstrator CH 650, but weather delayed his commercial flight by two days! He flew up the following day with William (a Zenith production employee and new sport pilot).

We returned to Oshkosh with the shiny Zenith Camper prototype (expertly built and polished by Alicia and Scott Sutton) using it to haul display materials from the Zenith factory. As in years past, we demonstrated kit aircraft construction in the AeroPlane Hangar, located just north of the Zenith display area. Below, unloading kit parts in the AeroPlane Hangar from the roomy camper:

Our good friend Joe Scheibinger, a Zenith builder based in Oshkosh, invited us over to his house for local Wisconsin brats and brews, and to check out his Zenith CH 750 kit project. What a great start to the Oshkosh week!

Starting on Monday morning the Zenith booth was busy throughout the week, with the factory STOL CH 750 Super Duty, the Zenith CH 750 Cruzer and the Zenith CH 650 on display:

As usual, I presented several forums on light aircraft design and construction, including a "Homebuilts in Review: Zenith CH 750 STOL Super Duty" presentation with EAA's Mark Forss where I discussed the unique high-lift features of the Zenith STOL designs (below):

Zenith builders and EAA chapters are some of the very best hosts! Below, enjoying shrimp BBQ from Zenith builder Cliff King and EAA 944 in the sprawling EAA campground: 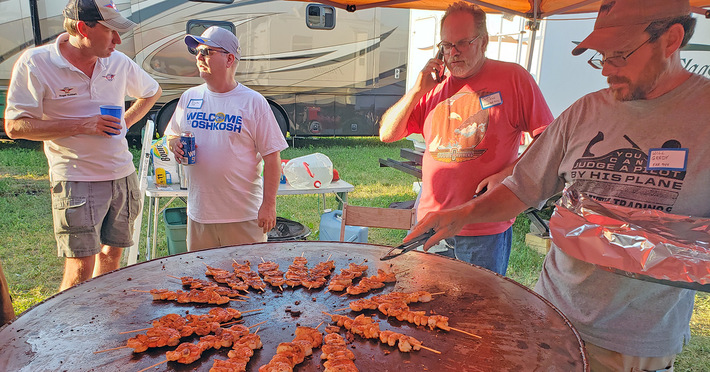 My son Calvin did an excellent job teaching about building all-metal light aircraft in the AeroPlane Hangar all week:

Joe joined him with his Zenith CH 750 fuselage assembly (with a Jabiru 3300 installation on the nose). Joe is a wonderful ambassador for Zenith Aircraft, and shares his love of aviation with both young and old! 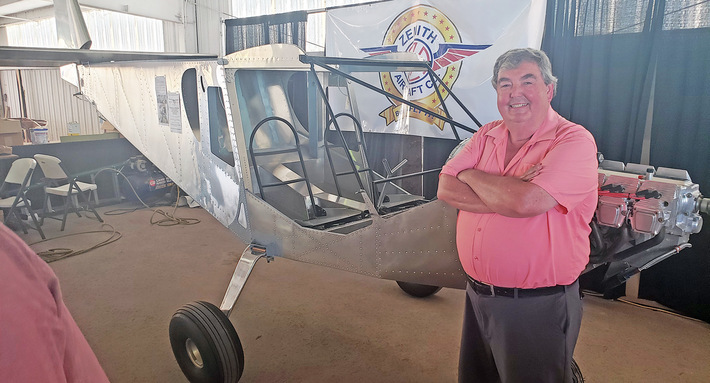 Jeff Setzer, technology evangelist at GSC and Solid Works expert, shares details about using SolidWorks software to design and build your own light aircraft at the EAA Homebuilders Hangar. 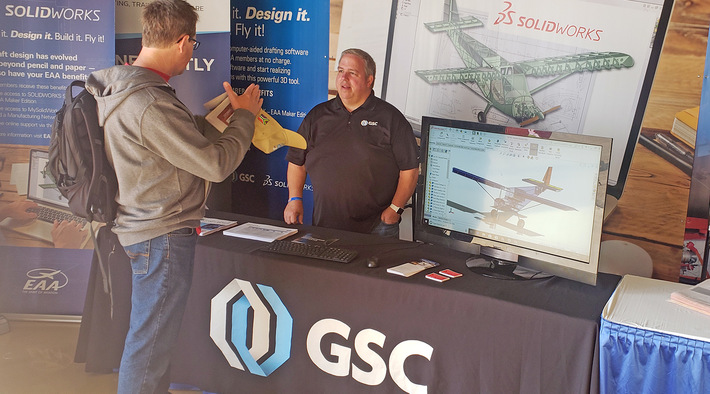 Able Flight gives its new pilots their official wings at a ceremony every year at Oshkosh: Wounded veteran Lt. Colonel Daniel Gade (U.S. Army-retired, picture far right) learned to fly in Justin Falls' adapted Zenith CH 750 SLSA at Ohio State University earlier this summer and is now a licensed pilot thanks to his hard work and an Able Flight Scholarship.

(I was thrilled to learn right after Oshkosh that Justin Falls flew his Zenith CH 750 solo from Ohio to his home in North Carolina in his CH 750 SLSA. Justin is a quadriplegic pilot who learned to fly thanks to an Able Flight scholarship, and is now the proud owner of his own aircraft.)

Zenith builder/flyer Gary Motley was chosen to fly his Zenith CH 750 Cruzer in the EAA Airventure Homebuilt Showcase fly-by, a feature of the airshow. Watch his amazing 360-degree video! 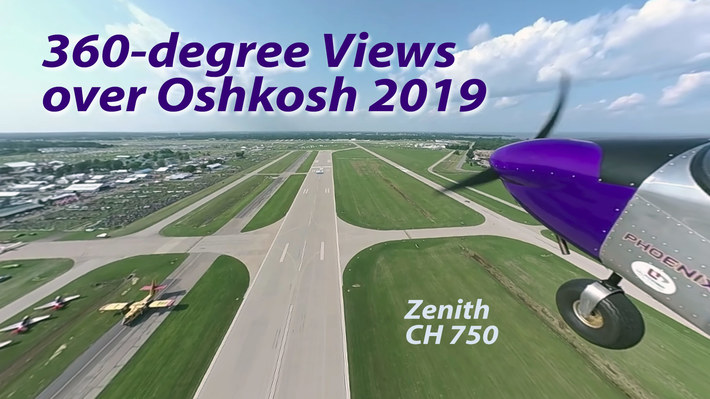 In the "ultralight" area at Oshkosh, Joe Harrington's awesome STOL CH 750 that Joe and his wife flew in from Alberta, Canada. Joe was awarded the coveted 2017 Lindy Award for his polished Zenith.

Below: Avilution had their beautiful STOL CH 750 aircraft on display, and their UnPanel in the STOL CH 750 Super Duty continued to "awe" builders and pilots!

For most the Oshkosh experience is about seeing the airplanes in the air and on the ground. I'm proud that we're also able to make the Oshkosh experience also about learning to build and actually getting started on building an aircraft. Below, father and son get started building their own STOL CH 750 Super Duty while at Oshkosh 2019! 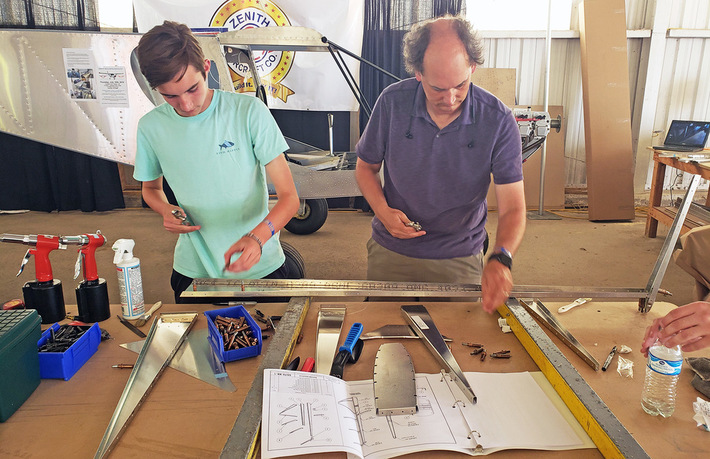 Oshkosh is also a good time and place to meet with suppliers and to discuss plans for the upcoming year. Here, relaxing with William Wynne of FlyCorvair, planning for the upcoming Zenith Open Hangar Days. Watch the video: 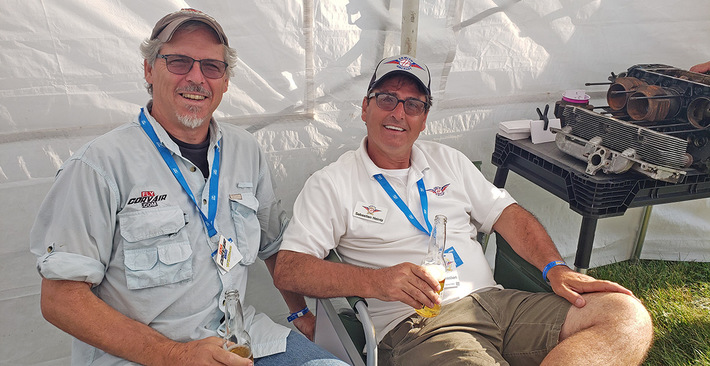 Another relaxing moment: enjoying the shade and watching the afternoon airshow with Walt Snyder: The annual Zenith banquet at Oshkosh is one of the highlights of our week. The Banquet on Thursday evening was again a relaxing evening with great camaraderie among builders, owners and flyers! We have the best customers!

The cakes at this year's banquet honored Zenith's Roger and EAA's 50th:

Herman Eshuis of Wheels and Wings (Edgewater, Florida) was on hand to discuss professional builder assistance:

The Zenith Camper prototype at Oshkosh fits quite naturally at the Zenith booth:

For me, the Oshkosh experience is always a family affair and I feel fortunate that three of my (mostly) grown-up children were able to visit Oshkosh. Below, my daughter Lucie at the Zenith booth:

Thanks to everyone who came by and participated!

The Zenith booth was our "little planet" for the week of Oshkosh. Unlike most visitors, we seldom strayed away from the booth during the week:

Before I forget, I need to mention the new Zenith t-shirts and hats available from EAA (and were being sold at the EAA Sky Shoppe at Oshkosh). Order your new Zenith apparel online directly from EAA, or contact Zenith.

Oshkosh is the place to see an incredible variety of all types of aircraft... including a nice selection of Zeniths

Found this busy campsite (around a STOL CH 801):

Judging from the trampled grass, we had a busy week! 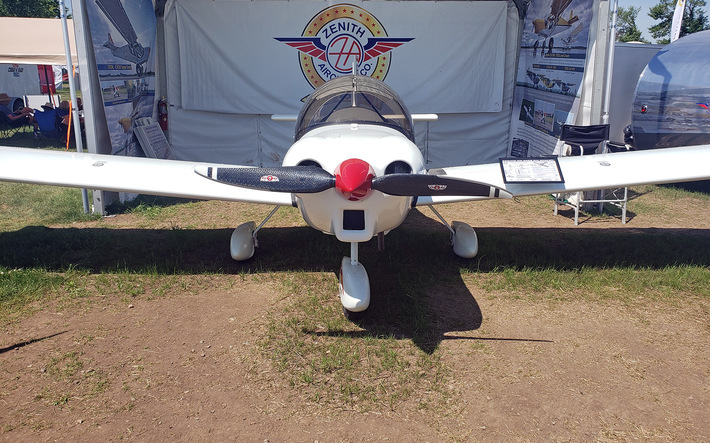 Monday morning (after the show) we had a late start due to to low ceilings but once we were airborne we had good weather straight to Mexico, Missouri! We had no empty seats flying home:

Video: Flying home in the Zenith CH 750 Cruzer with my son Freddy, over the Mississippi River:

Great review of the show and great speaking with you and Roger again. Keep up the good work and cranking out a great aircraft kits.

Great Report, Interesting Pictures and a pleasure to read and enjoy, hoping to be there next year.

I live just NW of KHAE.  Saw several Zeniths going over headed to  and returning from KOSH.  Unable to go this year (WAAAH!!)

Thank you for sharing this great report. Greetings from Colombia..!!!

Great report!  Wish I could have been there!  See you at the Open Hangar Days in September!