"Mr Heintz, from the time I was a boy I loved airplanes. Life, as it does many times, prevented me from becoming a pilot until I was 40 years old. I loved flying, then life stepped in again. I had 4 growing kids. My job was eliminated and my flying was put on hold. But, I always made it to the EAA fly-in. It was there I first saw the Zenith airplanes and fell in love with them. I wanted to build one. Every year at the fly-in I would stop and look at them. Unfortunately every year there was something in my way. Now I am 64 and have terminal cancer. My dream was never realized and never will be. But, you know what? This EAA fly-in there I was. Looking over the Zenith airplanes. I wanted to get in and fly. They are beautiful. I wanted to tell you that. I am hoping someday maybe I will find someone around here that owns one. Take care, God Bless and keep them flying."

This touching letter was from Mike Pagel of Appleton, Wisconsin (just 20 miles north of Oshkosh). I shared the letter on my Facebook page to reach out to area builders and flyers to see if we could get Mike up for a ride in a Zenith. I also shared it with a few EAA staffers since EAA has two Zeniths based right at Oshkosh (the 2014 One Week Wonder Zenith CH 750 Cruzer and the staff-built STOL CH 750) and thought this might make a good story idea for EAA since it resonates with so many of us.

Joe Scheibinger, a local Oshkosh resident and active CH 750 builder, made contact with Mike right away and arranged for Mike to visit Joe's project and to give him an EAA tour the following day. Joe wrote me back:

"Sebastian, you know the old saying, "God works in mysterious ways?" Looks like I just met a great builder friend because of you. Sometimes the story is written before the players read the script. I took Mike over to the EAA back buildings and we had a ball. He sat in the One Week Wonder and saw the Zenith by the EAA employees. Then I took him over to my flight surgeon and it looks like we may be able to get his third class back! Mike and I are close to the same age. We both suffer from the same condition, mine has been repaired and Mike's prognosis is looking good. We both are active Ham Radio enthusiasts and we only live a few miles away! Had lunch and talked Zenith. All in all a very good day. Thanks for this opportunity Sebastien. Mike is coming with me to the Open House. I think we may have a new builder!" Tony Sabos, an airline pilot and flight instructor in the Chicago area, reached out right away to Mike and made arrangements to fly up to Mike for a flight in Access Aero's Zenith CH 750 Cruzer, a flying club airplane built by members of EAA chapter 461 (that was part of the 2015 EAA Give Flight program where the wings were built during the week at EAA AirVenture 2015) 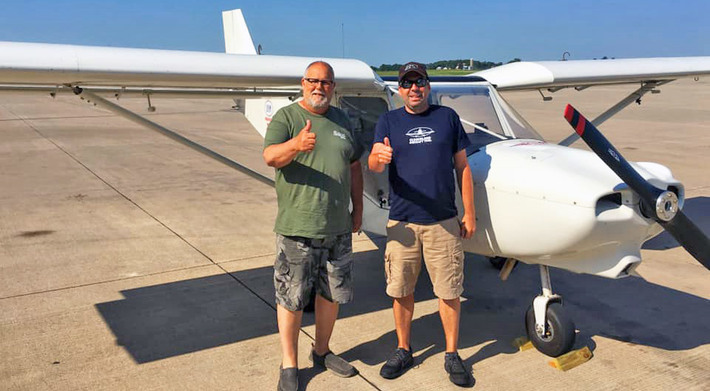 After the Saturday morning flight with Tony on Friday, Mike commented the following on my original Facebook post:

"Thank you Sebastien, Joe, Tony and everyone for the thoughts, prayers and kind words. I am beyond pumped. The time Joe spent with me explaining everything and encouraging me was awesome. The flight today with Tony, I cannot find the words to explain how I felt and even now still feel. Thank you, Thank you, and Thank You Sebastien for setting this in motion."

Below, Joe took Mike to visit the EAA Kermit Weeks Hangar at Oshkosh:

As you can see, all I did was share Mike's post on Facebook, and Zenith builders and flyers rose to the occasion and reached out to Mike, sharing their love of building and flying with a fellow human being!

I, too, have had disappointment and some redemption. After building and flying another, slightly larger home built for a few years, I started a CH 750 STOL in 2013. In 2015 I developed a heart condition that kept me from flying PIC and led me to let my medical lapse. In 2017 I had a stroke that left me partly paralyzed on one side and in 2018 sold my other airplane. This year I faced the fact that while I might fly Sport Pilot one day, it could be years before my left hand would function well enough to finish building the Zenith. To my delight, a good friend, pilot and experienced builder from my EAA chapter stepped up to work on the project and now there is hope it may be finished one day. If only I could make it through the tangle of “easy” med and certify it at a heavier weight!

It really was MY pleasure. Thank you Sebastien for the opportunity