Last week, I took a few days off from work and went on my first X/C trip of any substance in N75ZX. I left Angleton TX on Thursday morning and landed in Corsicana TX to meet up with Ed Poteet, another 750 builder. Ed took me to get a hamburger and we returned to (CRS) in time to take him up around the pattern in my 750. I think he enjoyed it, and he mentioned that's what he needed to get moving on his project again. 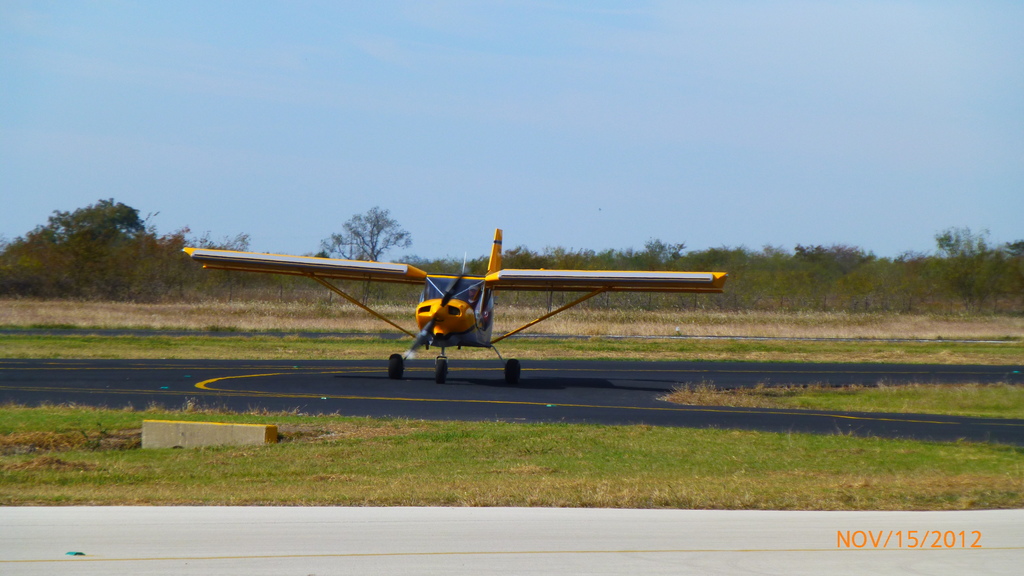 I flew on up to the Dallas area, landing at Rockwall (F46) to spend the night with my Mom. Left there Friday morning headed for Fayetteville, and shortly thereafter got my first taste of "mountain flying" in SE OKlahoma. Yes I know, they are not really mountains but they looked like the Himalayas'  to me. I arrived in Fayetteville around 12 noon, landing at Drake Field (FYV), a controlled tower. I had not landed at a controlled tower since I took lessons over 5 years ago, but it all came back to me fairly easily. Called the tower 10 miles out, told them who I was, where I was, what my intentions are, and followed the directions. Frank Goodnight, a friend of mine, is building a 701 there at the field and he was on hand to meet me. We had a look at his project, got some lunch and later flew over to a private strip called Weddington Woods out in the middle of nowhere. I was a little concerned about my take-off weight, as I was full of fuel and a lot of baggage and neither Frank or I qualify as "trim". However, I had 6000' of paved runway, 50 degree air, and have had some big guys up before. The 750 handled it fine, though I could certainly tell the difference in roll out & climb. We arrived at "Weddington Woods" after about a 20 minute flight over a couple of mountain ridges. It's a strip where you land to the south & take off to the north, regardless of the wind direction, due to the terrain on the south end. Met some pretty cool folks over there, 2 Jims, a Mark, and another guy who I forgot his name, all flyers and builders. After a hot meal & good night's sleep at Frank's  place, I was anxious to get back to South Texas early in the morning. I woke up to find my plane was frosted-in, and had to wait a couple of hours to let it melt off the wings. I took the opportunity to take a few photos: After departing Arkansas, I made one stop at Robert Kerr Field (RKR) in Poteau, OK and another in Corsicana TX on the way back to Angleton. Got into Bailes Field (7R9) about 4:45 pm, ready to put N75ZX up and get on home. What a great 3 days it was, 15.5 flight hrs, 1175 miles, 82 gal of fuel burned. The 750 handled it well and was a pleasure to fly that far in. I've got over 90 hrs on her now, and she continues to do a fine job taking me all over the countryside.

Thanks for the kind comments, guys. Gerald, I've got a Cont. C-90 with the ground adjustable 72" Whirlwind prop.

I enjoyed your trip report lots. Hope to see many more!

Jimmy. thanks for sharing. What a fun trip.

Great read and thanks for sharing your adventure.