Here's my report of the 2017 Sun'n Fun fly-in held last week (April 4 - 9) in Lakeland, Florida, with photos and videos of the trip to and from Lakeland from the Zenith Aircraft factory in Mexico, Missouri. Watch the videos for additional info (with narration) and check out some of our Facebook posts of the trip and the event.

Above, ready to depart from our home base at Mexico Memorial Airport (KMYJ) on Friday (March 31). Below, me in the Zenith CH 750 Cruzer with brother nick close by in the SAM-EX prototype aircraft.

The flight south to Florida:

Video: Following the river, landing in Cairo, Illinois, where the Ohio River flows into the Mississippi River:

The first day we headed farther east than usual to make a stop in Columbia, Tennessee, to look at an older STOL CH 701 and to drop off a pilot there. (We bought this nice used STOL CH 701 and flew it back to the Zenith factory where we'll refurbish it to resell.)

I flew most of the trip throttled back in the Zenith CH 750 Cruzer (powered by the 130-hp UL Power engine) to stay together with Roger in the slower STOL CH 750 who cruises at about 100 mph.

We had light tail winds most of the way, and once in awhile I'd cruise faster ahead: 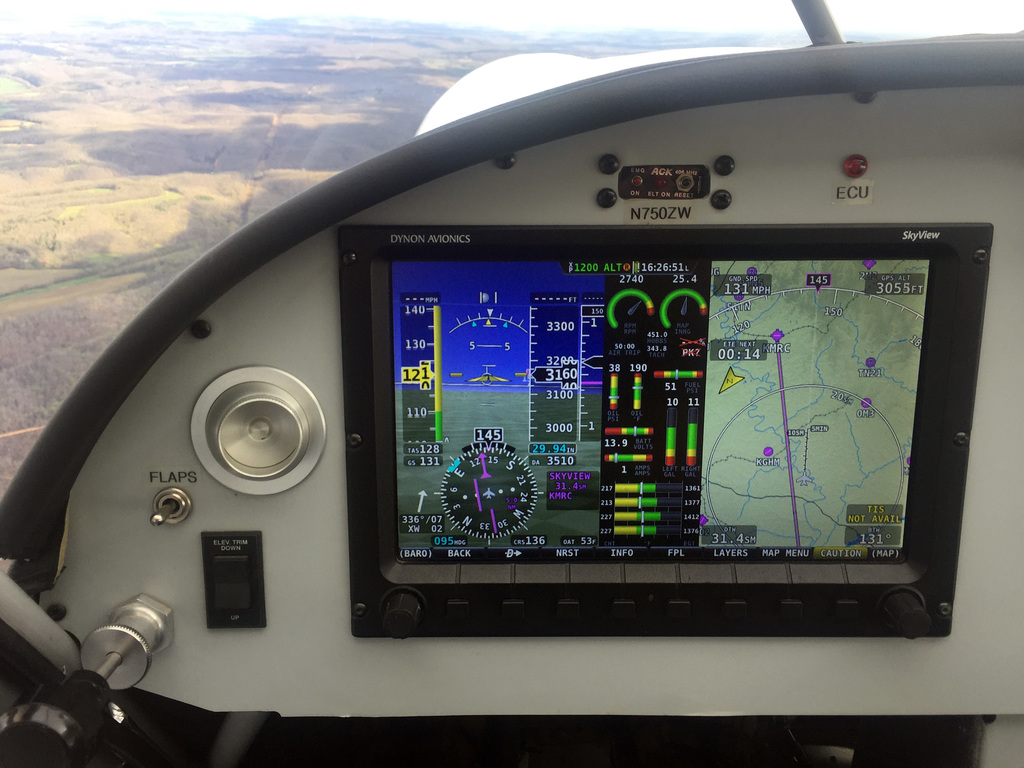 Video: Arriving in Florida the following day, we stopped at Crystal River (KCGC, on the Gulf Coast north of Tampa) before our arrival in Lakeland. We arrived a day early so the approach followed standard procedures

Video: Approach and landing in the Zenith CH 750 Cruzer on Runway 9 at Lakeland Linder Regional Airport (KLAL), with the STOL CH 750 and the SAM-EX airplane.

Two local Zenith builders/owners brought their planes to the Zenith booth for our display: Sebastian Dewhurst's STOL CH 701 and Bob Rychel's Zenith CH 650.  Here we washed them before the show: 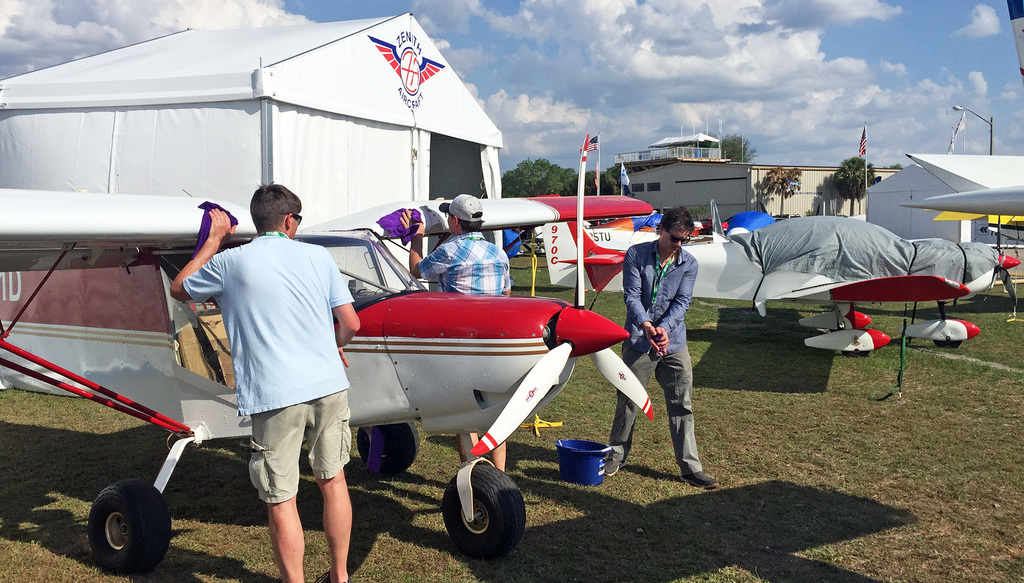 Below: The five Zeniths at the Zenith Aircraft booth at Sun'n Fun 2017:

This was our first time bringing the SAM-EX to Sun'n Fun and it generated a lot of interest:

The Blue Angels were the main attraction of the 2017 Sun'n Fun fly-in and we enjoyed watching the show:

Below, meeting with Justin Falls and Charles Stites of Able Flight to discuss adapting the aircraft for hand controls. We're excited to be working on this project!

Halfway through the week and we're still energized and smiling :)

In the workshop area of Sun'n Fun, Danny Smith demonstrates assembly of the Zenith rudder and shares information about building your own aircraft with visitors: 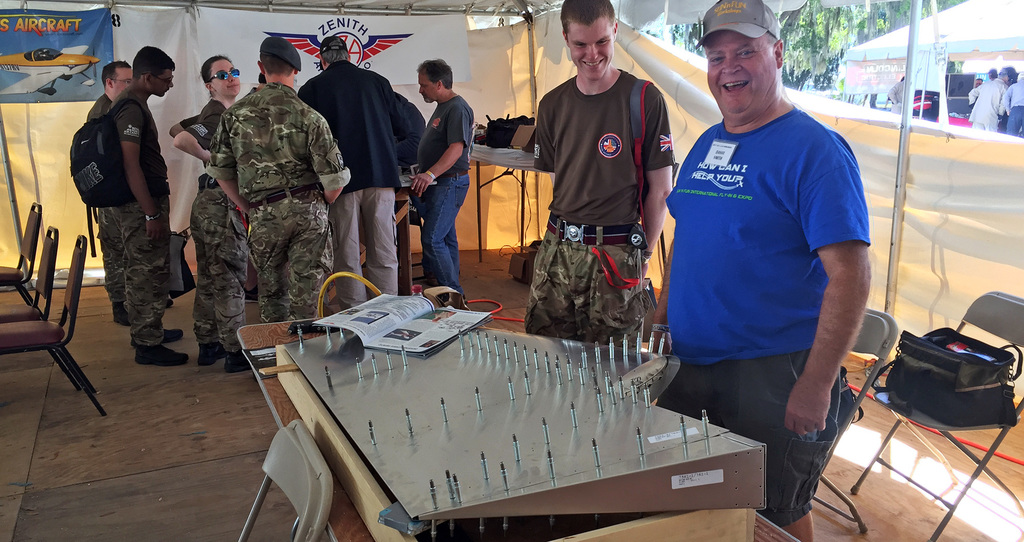 Visitors were also able to build the all-metal Zenith 3-hole binder while learning about drilling and riveting: 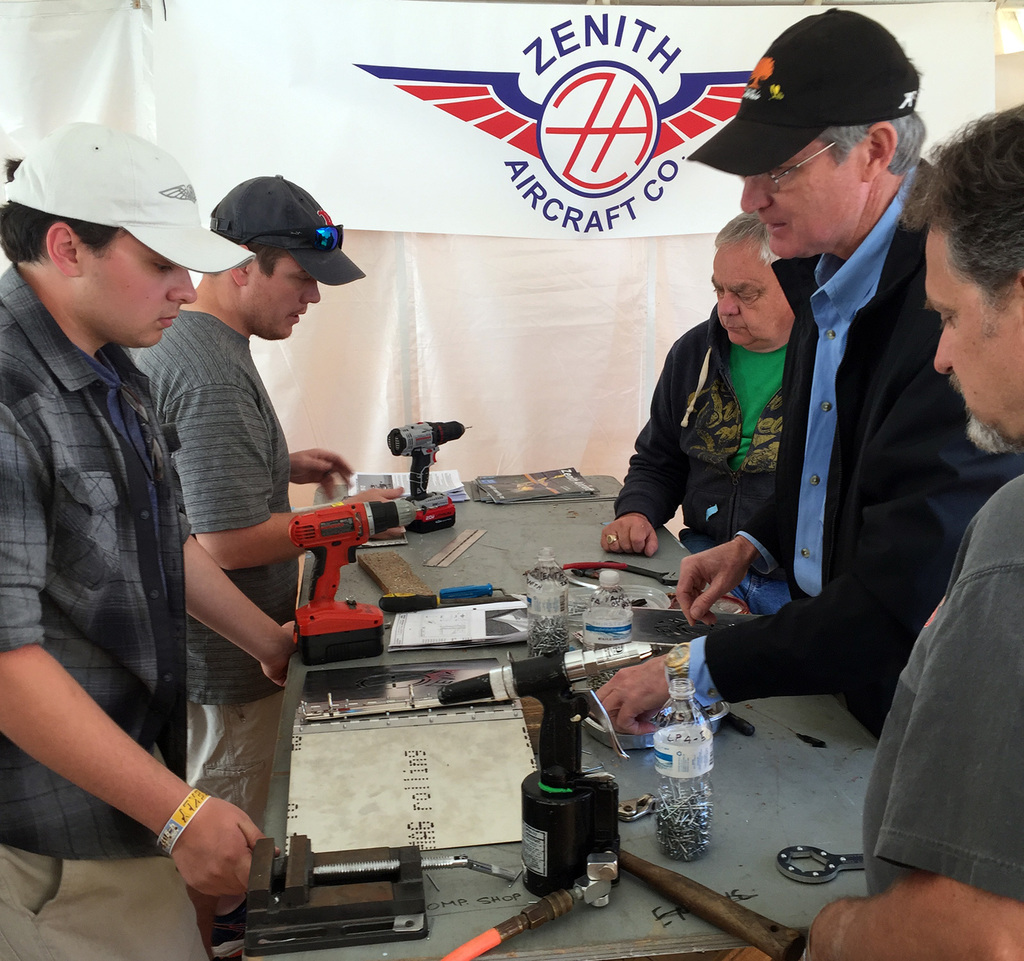 My brother Matt and I presented nine educational forums during the week of Sun'n Fun. Whew: that's 9 hours of talking! 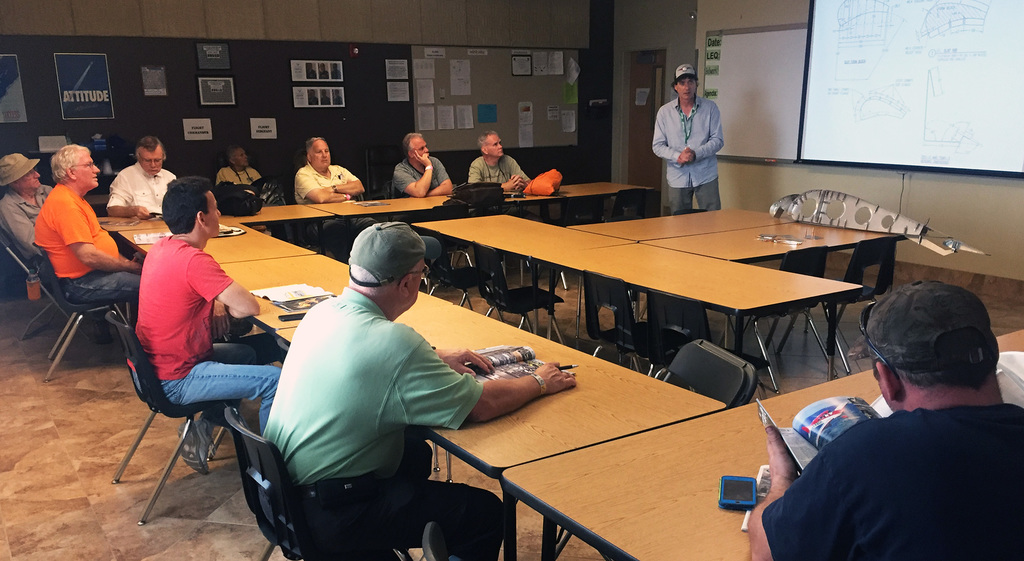 Trying out the SAM Aircraft

Discussing planes while watching the Blue Angels and the airshow (not so easy with the noise level!): 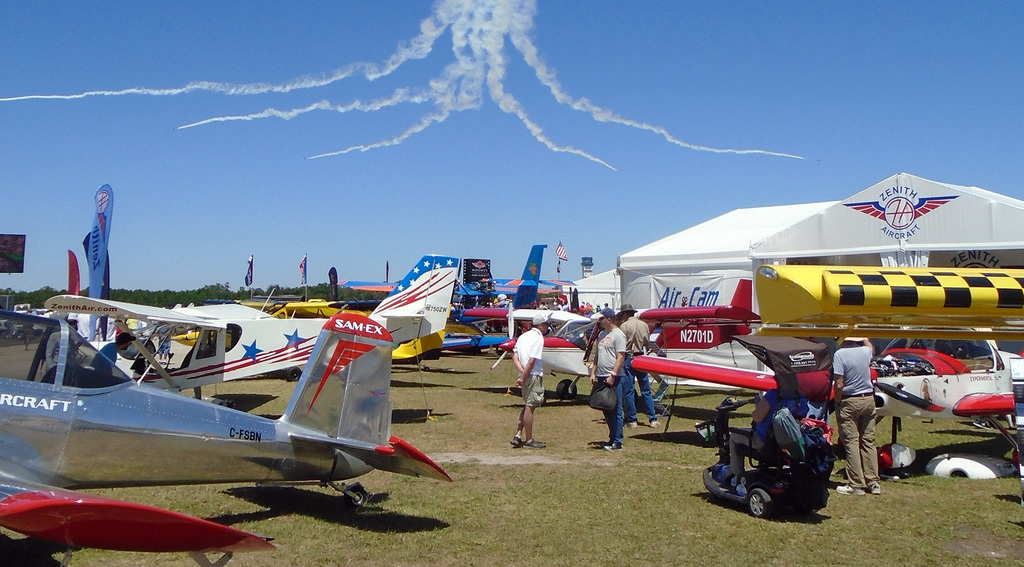 Bob Rychel talks about his Zenith CH 650 and the Viking engine installed in it:

Seen on the flight line at Sun'n Fun, this STOL CH 750 with custom Corvair auto conversion:

On the last day, Roger rests in the shade:

Dinner with friends and colleagues at the conclusion of Sun'n Fun 2017. As usual, it was a real pleasure to meet with existing Zenith builders and owners, and to meet new ones!

While we had a truly positive experience at Sun'n Fun 2017, something unfortunate happened right before heading home: both pairs of Sennheiser headsets were stolen out of my airplane parked at the Zenith booth on the Sun'n Fun grounds (fortunately we had an extra set that I was able to use to fly home with).  I hope whomever stole the really nice headsets (active noise cancellation with bluetooth) will put them to good use and truly needs them, and I hope this was an isolated incident (and that Sun'n Fun organizers provide needed security the night after the end of the show on their site in the future).

The flight home from Lakeland, Florida: View from the Zenith CH 750 with a rear facing camera, taking off runway 09 (Lakeland, FL), and being joined by the Zenith STOL CH 750 and the SAM-EX in the air, with a fuel stop in Cross City, Florida (we didn't get the chance to fill up in Lakeland before heading home):

The flight home from Lakeland, Florida: Same video as above except as seen from a camera inside the Zenith CH 750 Cruzer cabin:

One of many interesting and beautiful views along the way. Here over the Gulf Coast by Cedar Key, Florida:

Below, enjoying the great view from the Zenith CH 750 Cruzer, flying over southwest Georgia and southern Alabama, and chatting on the radio with Randy Schlitter from RANS Aircraft and Kyle Voltz from EAA:

Views from the SAM Aircraft (photos by brother Nick):

Passing a barge on the Mississippi River (above). View of the panel in the tandem SAM-EX (below): 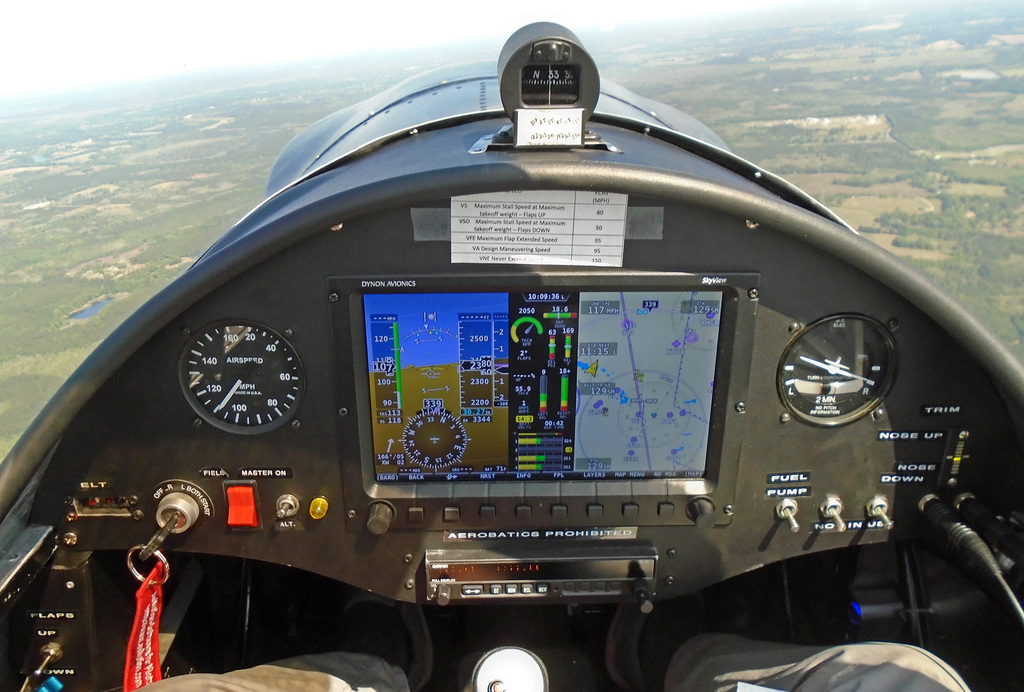 Click here for more air-to-air video of the SAM-EX on the way home from Sun'n Fun.
Nick in the SAM (notice the good all-around visibility): 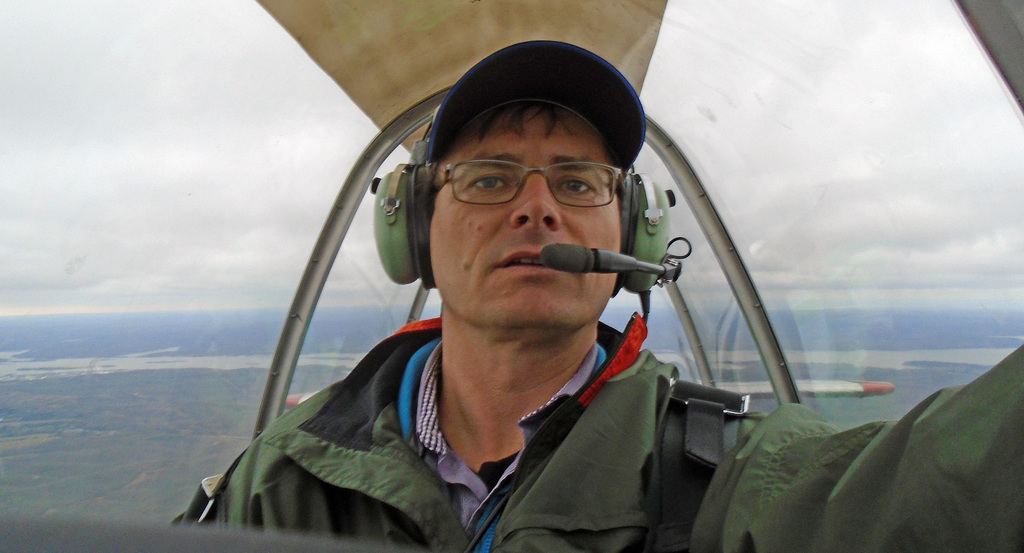 Below, a view of the cabin and panel in the SAM Aircraft. Lots of navigation info: GPS on the SkyView panel, ForeFlight on the iPad, and a sectional (chart). 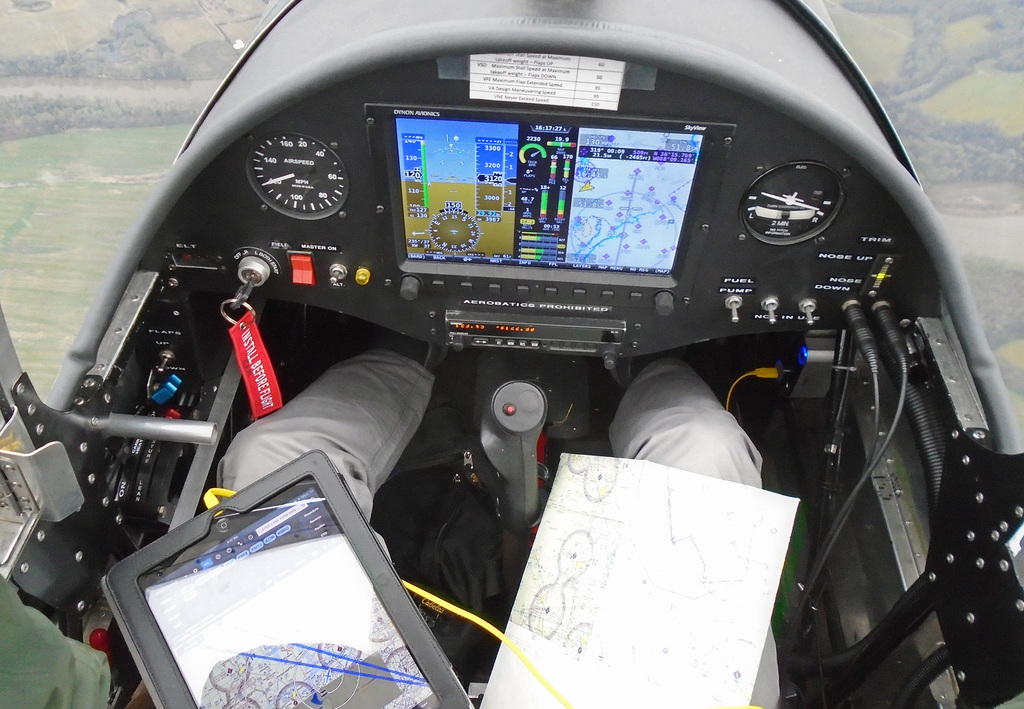 We generally plan stops about every two to three hours when flying cross-country. Even though we have plenty of fuel to keep going, we prefer to stop to stay refreshed and to enjoy the trip. We typically fly low (500 - 1,500 feet AGL) so stops don't take very long.  Flying back after the show we nearly made it all the way home in one day thanks to light tailwinds. We spent the night in Sikeston, Missouri, due to weather by St Louis and pending dusk:

Narrated video of the last leg of the 1,000 mile flight home from the 2017 Sun'n Fun fly-in. Flying the Zenith CH 750 Cruzer with the SAM-EX over the Missouri River, southeast of the Zenith Aircraft kit factory in Mexico, Missouri. Comment by Chris M. Brammer, Jr. on April 17, 2017 at 12:28pm
Looks like a great time was had by all on the flight to Lakeland and back to home base. Enjoyed getting to talk with you at SunNFun.

Thanks for sharing. Inspiration, priceless.

Very nicely done, great to see the Zenith Flyboys having so much fun, what a great inspiration, thanks for posting!

Like weather was the reason you stopped in Sikeston. (I smell rolls!)  :)

Always good to talk with the Zenith crew at Sun'N'Fun. Attending the float seminar was very informative. Have a good year Zenith.

As you point out, with a Zenith Aircraft, it's not so much about the destination as it is the journey!  I flew my STOL CH 750 to Sun 'n Fun along with a friend in his plane and we got weathered-out at our usual Cedar Key stop-over and instead stopped at Perry, Florida.  Much to our amazement, Perry had an authentic Italian restaurant (Mama's Italian Family Restaurant) in town and we thoroughly enjoyed our unscheduled stop-over.  Had to recalculate my W&B after that meal! Ha!  Also, the airport manager there couldn't have been nicer.

I constantly am thankful for the fine people at Zenith Aircraft that make it possible for us to "live the dream" and have these wonderful experiences.