On Wednesday, we flew by the shortest paved runway (a nice R/C field, just a few hundred feet long) and later that night I had the chance to fly over the longest runway I'd ever seen (NASA's shuttle landing runway at Kennedy Space Center, three miles long!). Above: Sebastien Heintz, Charlie Becker, and Brady Lane (left to right) with the One Week Wonder at Sebring.

We started on Monday morning at the Sebring Airport (where the airplane has been hangared since the Sebring Sport Aviation Expo).

After inspecting the airplane carefully, we flew to our first stop: Punta Gorda airport on the Gulf Coast to visit with EAA Chapter 565. Showing off the airplane to members of EAA Chapter 565. 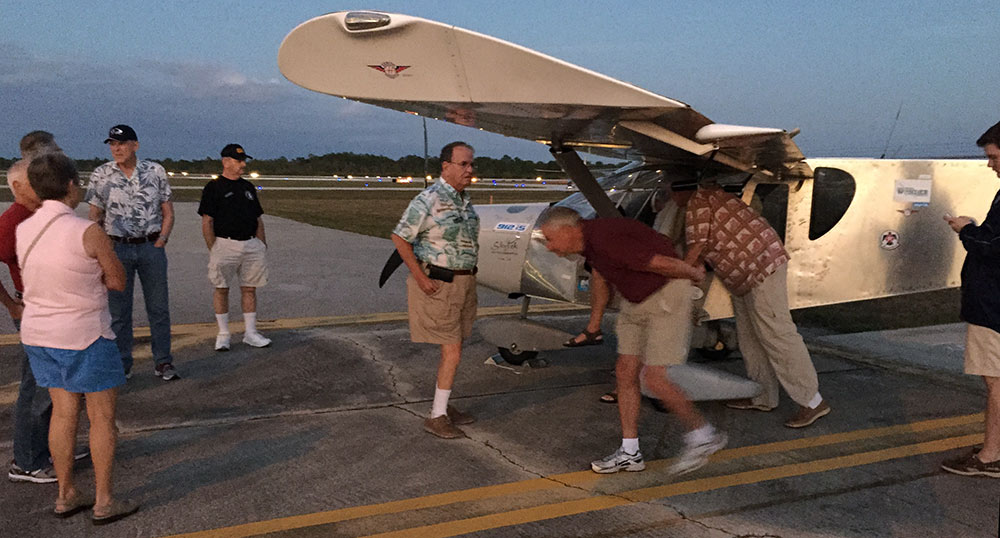 A nice view of the panel with the dual Dynon SkyView touch screens: 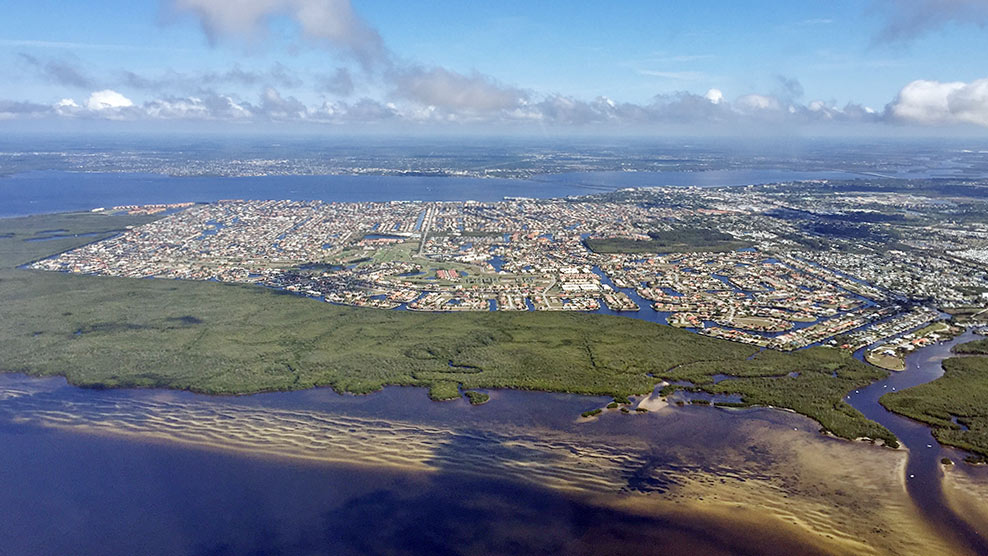 The second day we flew north to Williston. On the way, we learned about some of the ADS-B features available with the Dynon SkyView, including traffic: 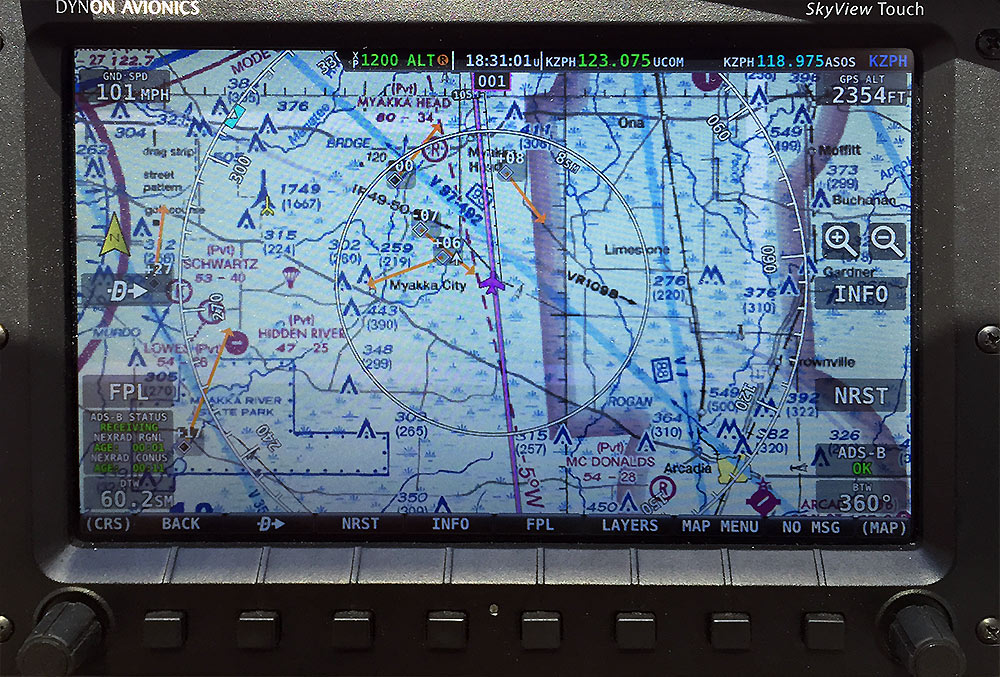 Showing the airplane at Williston airport:

It was great to be greeted by existing Zenith builders. Jan and Bob Nicholas with their STOL CH 750: 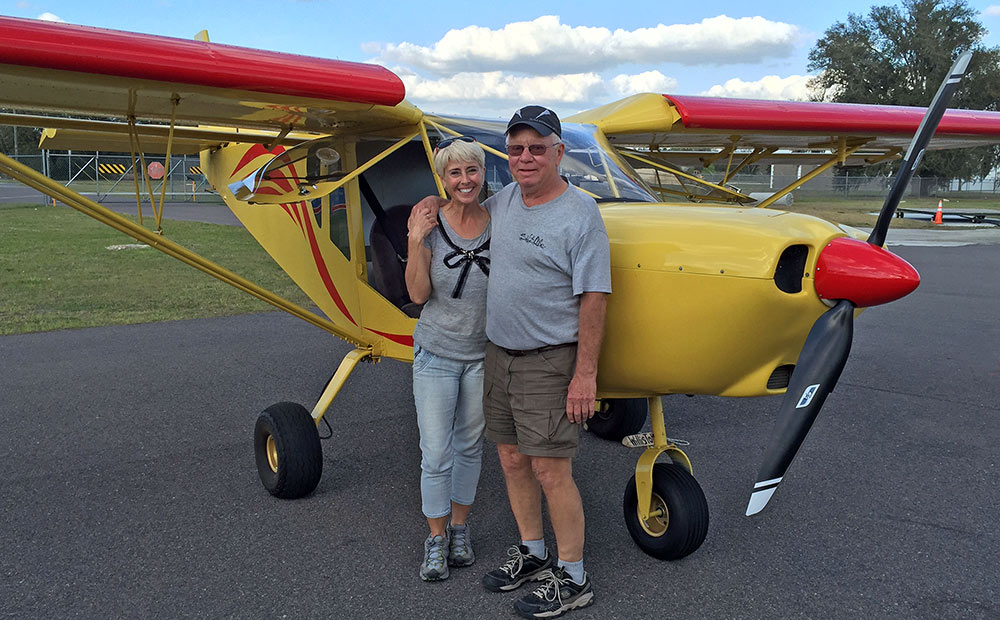 Charlie Becker speaking about the "Give Flight " project at AirVenture Oshkosh 2015, where five sets of wings will be built for EAA chapters: 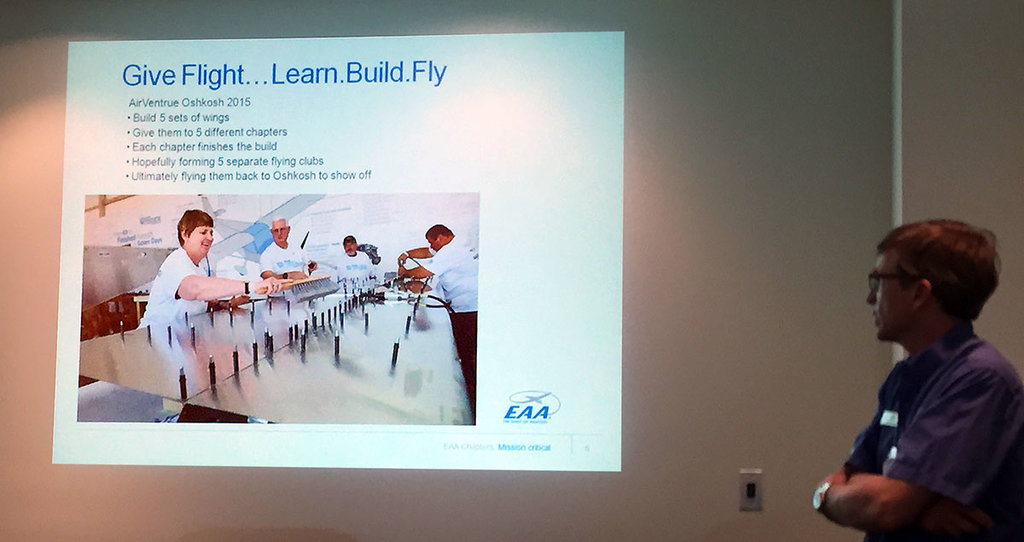 The One Week Wonder in front of the FBO: 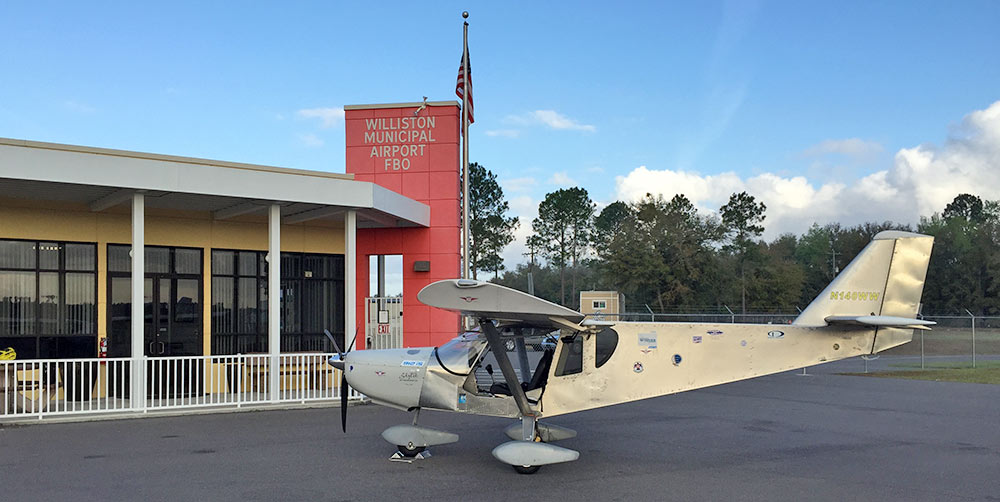 The following morning we decided to fly west to nearby Cedar Key airport, a tiny island community just off the Gulf Coast: 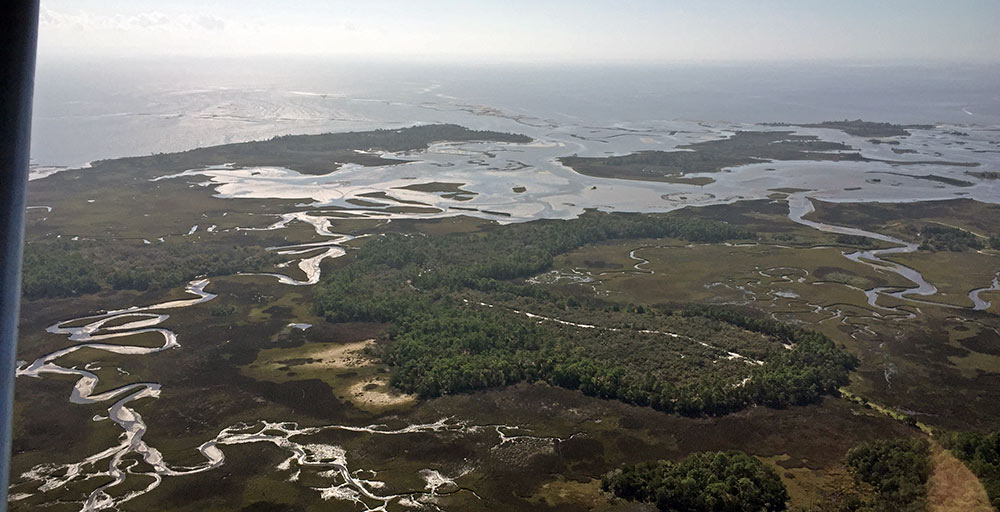 We headed east toward the Atlantic Coast.  Passing by a paved runway, probably about 300 feet long (this was a nice R/C field): We landed at Massey Ranch (Edgewater, Florida), and briefly visited with Jon Croke (HomebuiltHELP.com) and Viking Aircraft Engines.  Below, Charlie and Jon with a Zenith CH 750 Cruzer with a Continental O-200 engine installation: 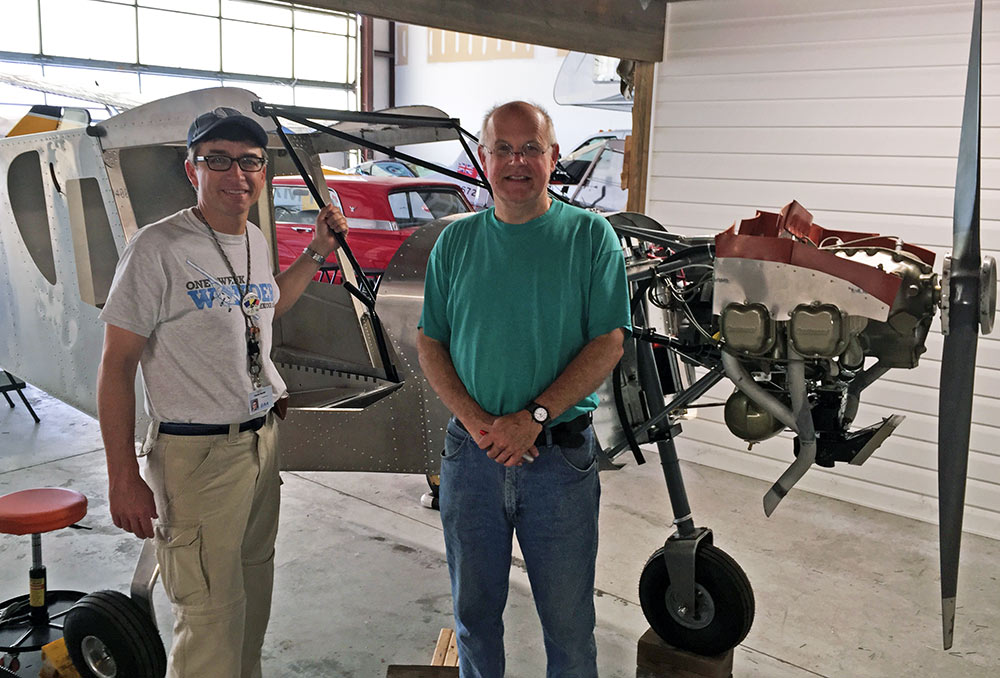 After turning on our video cameras mounted to the plane we flew to Arthur Dunn Airpark in Titusville, Florida, home of EAA Chapter 866.  Approaching the airport, with a view of Cape Canaveral in the background: Being right next to Cape Canaveral, I took the opportunity to fly the "space shuttle approach" over the 15,000 foot long NASA Shuttle Landing runway. Local builder Eddie Brennan (who works at Cape Canaveral) helped me navigate the restricted airspace. Here's a nice view of the "vehicle assembly building" at the Kennedy Space Center from the south end of the runway: Flying by the rockets at the Kennedy Space Center Visitor Complex:

The flight to Cape Canaveral:

Back at Arthur Dunn Airpark, Brady Lane conducts more interviews in front of the One Week Wonder:

Charlie Becker talks about the One Week Wonder project to Chapter members: A nice view of the panel as I taxied the plane to the hangar that night: 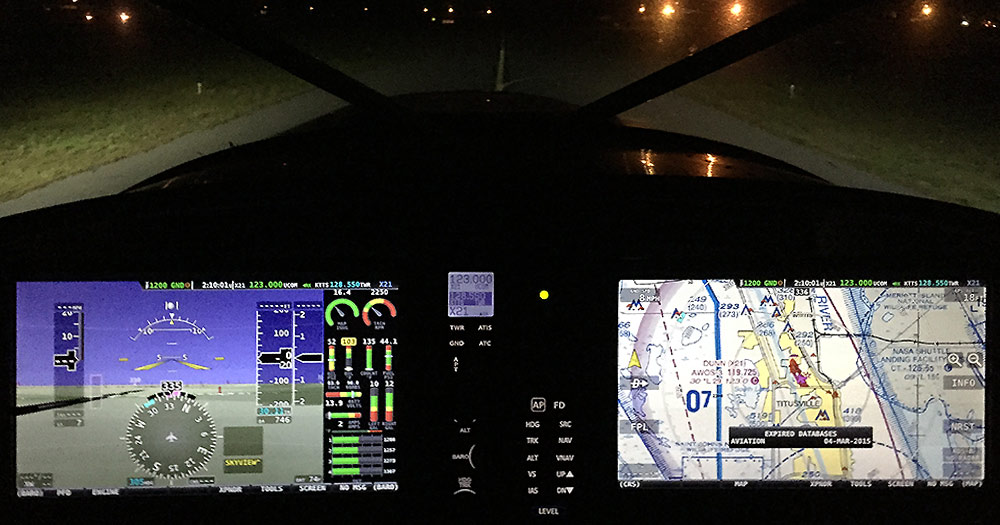 The next morning we posed local planes for a group photo with the One Week Wonder, with a surprise "Gaggle Flight" fly-by from Spruce Creek:

The One Week Wonder with Bob Rychel's two Viking-powered Zeniths: 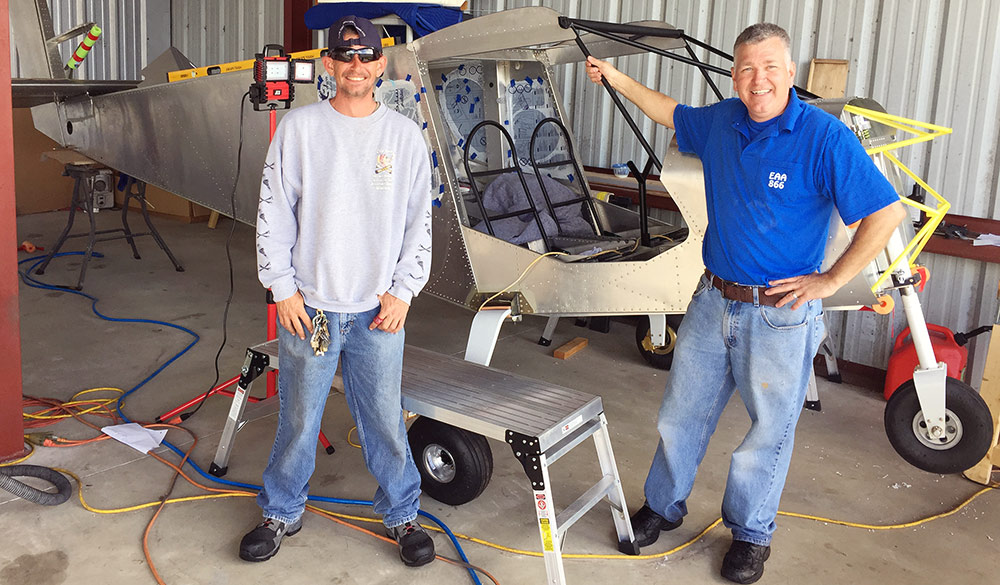 I returned home the following day and Charlie and Brady continued on with the EAA Chapter visits.

I thoroughly enjoyed this trip and the opportunity to meet with Zenith builders and friends. It was great to see Charlie Becker promoting the great programs that EAA offers and it was a good opportunity for me to see the work that many EAA chapters accomplish.  Best of all, it was great to spend more time in the One Week Wonder airplane, and made me appreciate even more all the work that went into building such a great airplane in just seven days! Thanks again to all 2,500 individuals who contributed to its construction at AirVenture Oshkosh 2014!

Brady Lane has many more (and better) photos and videos of the week-long tour across central Florida, and he will be sharing them soon through various EAA publications.

I will be traveling next week across central Florida in the One Week Wonder with Charlie Becker, EAA's Director of Communities & Homebuilt Community Manager, and look forward to meeting with many of you at one of the following planned stops at an EAA Chapter near you:

We plan to arrive at each airport no later than 3:00 pm each day.  I will be returning to Missouri on Thursday (by airline)  so I will personally only be able to make the first three stops listed above. Also, please keep checking this page as we near the dates for any updates or changes to our schedule.

In April, the One Week Wonder will be at the Sun'n Fun Fly-In (April 21-26) and the following weekend (May 2) at the Aircraft Spruce (East) Customer Appreciation Day in Peachtree City, Georgia.

As many of you remember, one of the highlights of Summer 2014 was the One Week Wonder project at EAA AirVenture Oshkosh 2014, where, in just seven days, a Zenith CH 750 Cruzer kit was uncrated, and completely built (and granted an airworthiness certificate) during AirVenture! Over 2,500 people participated (including many Zenith builders) to help make this project the huge success that it was. Watch the time-lapse video.

Since the successful first flight of the airplane two days after the end of AirVenture 2014, EAA has been flying their new airplane around to show off the One Week Wonder to the aviation community.

The One Week Wonder airplane at the Zenith Aircraft "Open Hangar Day" in Mexico, Missouri (in September 2014) with some of the volunteers and Zenith and EAA staffers who helped build the airplane in just seven days!

Below, the One Week Wonder Zenith CH 750 Cruzer at Merritt Island, Florida was swamped by students of Space Coast Aviation. EAA's Andy Ovans shared information about the One Week Wonder project, Sport Pilot and Experimental aircraft on his way to Sebring: "The second I shut down these students came out in the rain to check out the airplane. I spent a solid hour talking about the airplane, answering their questions, and they became more and more excited the more we talked..." 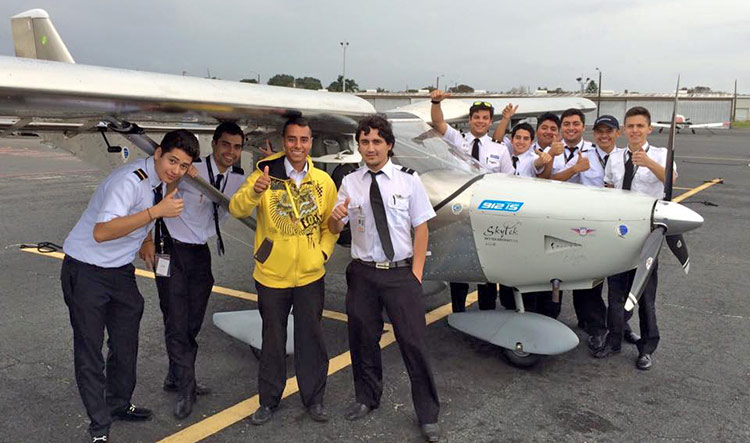 At the Sebring U.S. Sport Aviation Expo, the One Week Wonder airplane was a popular attraction at EAA's booth, and members of the media were able to fly in the aircraft that was built by more than 2,500 volunteers (including the reporters that flew the aircraft!): AOPA Flight Report | AvWeb Flight Report Keep checking this page for any updates or changes to our schedule.

Check out the inspiring video from EAA (by Brady Lane) of the Florida tour with the One Week Wonder:

Hey Sebastian  Three people, two place aircraft.  Who was the odd man out and what did he fly?   I'm excited about my 750 build, but it is too cold here in Maine to work on it for a few more weeks.

From a few years ago, here's the flight in to Cedar Key, Florida:

And the flight out:

Charlie Becker graciously allowed me a flight in the One Week Wonder from Dunn (X21) with Sebastien in the left seat.

We took a sunset pass around the Space shuttle Landing Facility with me making sure Sebastien did not get the fighter wing attacking us due to substantial airspace restriction…not that he really needed my help!

Notes on the flight: she flew like a dream. I am even more motivated to complete my Cruzer Project…(Now  affectionately called the “Two Year Wonder”)

The One week Wonder is a testament to the EAA, Zenith, and those that follow or foster a passion within aviation. Well done to all in Oshkosh for a fine rivet job!

When are you all planning to get to Spruce Creek? Friday sometime or Saturday morning? I'm building a CH750 at Spruce Creek and would love to drag my wife and son over to the One Week Wonder to see what a completed airplane looks like. I actually have a rivet in the right wing of that plane as well.

Welcome to sunny Florida. Make sure you plan a chance to fly low approaches to the Space shuttle Landing Facility just east of X21 at EAA 866...17,000 foot runway. We will give you local instructions when you arrive.

My Cruzer project has been quite fun and rewarding. My only regret is I cannot build it as fast as the one week wonder. See you all on Wednesday.