Despite a very wet beginning, we had a great time once again at AirVenture and really enjoyed meeting both existing and new builders from around the world. Following is a summary of our week:

Heading to Oshkosh from our factory in Mexico, Missouri: The STOL CH 750 as seen from the STOL CH 801:

Along the way we were joined by Dennis Sapp in his STOL CH 701:

Flying over flooded rivers (and towns):

Arrival at Oshkosh. Only "showplanes" (exhibitor planes) were allowed in as the grounds were simply too wet... All other planes were not allowed to land at OSH.

We didn't bring our aging factory demonstrator Zodiac XL planning to show a new Zodiac CH 650 or 601 XL in our booth instead (but not realizing that the wettest conditions ever at AirVenture would prevent some builders from flying in). Despite the wet grounds, many folks came out to see the lineup of STOL planes at the Zenith booth. Below is Bob McDowell's STOL CH 701 on Zenair amphibious floats (surrounded by receding water).

Mathieu Heintz presents the forum on Zenair Updates, answering questions on the Zodiac CH 601 XL upgrade and news on the STOL CH 750 gross weight increase available to amateur builders. During the week we also presented forums on the STOL aircraft and on Zenair Floats.

Within a few days the Oshkosh airport was opened to new arrivals as the grass fields dried up, and some more homebuilts made it in to the show... Below is Al Stuber's JayHawk STOL CH 750 flown in from Lawrence, Kansas:

Gus Warren shows off the ULPower engines (in front of a STOL CH 750 flown in from Canada). Gus had been planning to fly in from Florida with the UL powered STOL CH 750 but decided to drive instead with a couple of engines in the trunk of his car: 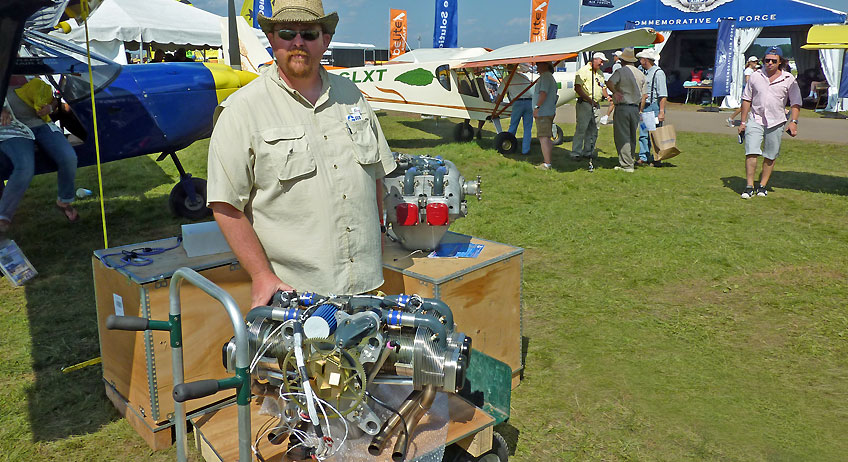 Frankfort High School (Kentucky) staff, students and volunteers were on site at AirVenture to show off their aircraft building projects (which include a Zodiac and STOL project). They plan to fly the finished Zodiac CH 601 XL-B to Oshkosh next year. The fuselage bottom skin of their Zodiac project can be seen below (they have a busy school year to look forward to!): 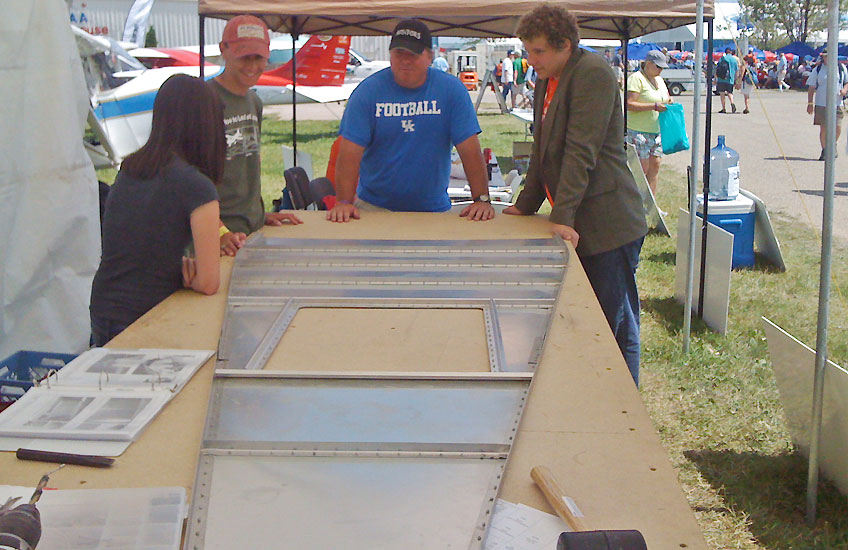 Can you spot the yellow STOL CH 750 in the photo below? (as seen from the Oshkosh control tower): 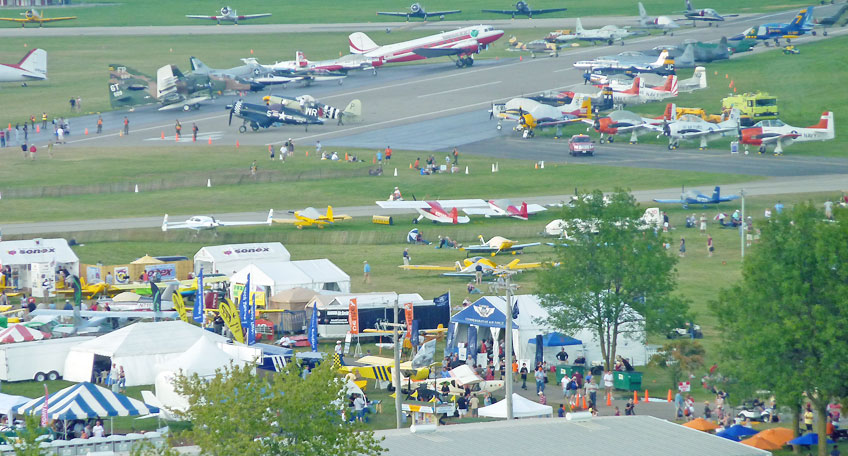 We had very enthusiastic interest in the STOL CH 750 throughout the show and seated hundreds in the plane during the week, wowing visitors with the easy cabin access, roomy size, and amazing visibility. Enthusiasts were excited to learn about the available gross weight increase. 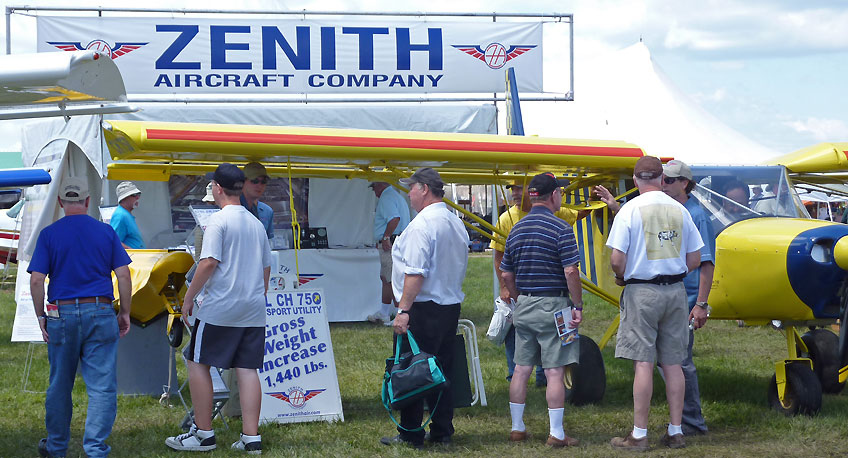 On the other side of the AirVenture grounds, AMD showcased a new STOL CH 750 S-LSA project:

The "Guardian" STOL CH 750 is custom configured for surveillance and enforcement operations with an external camera and high-power light. Both the camera and light can be controlled by the pilot: 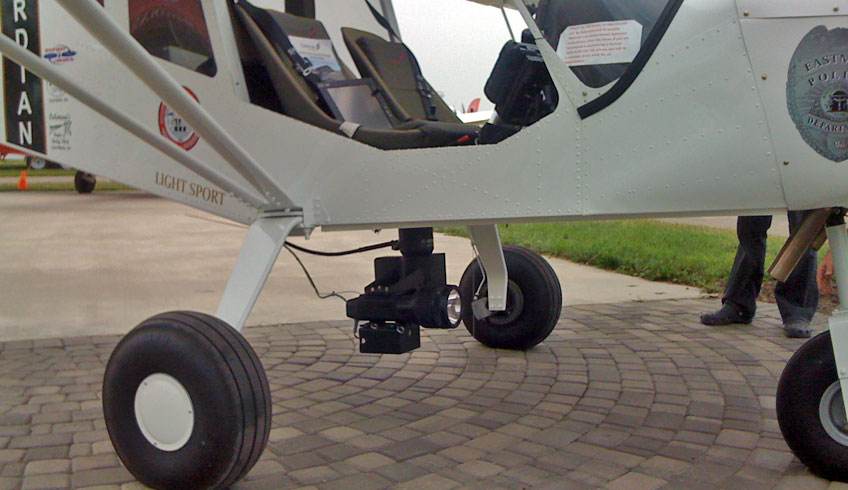 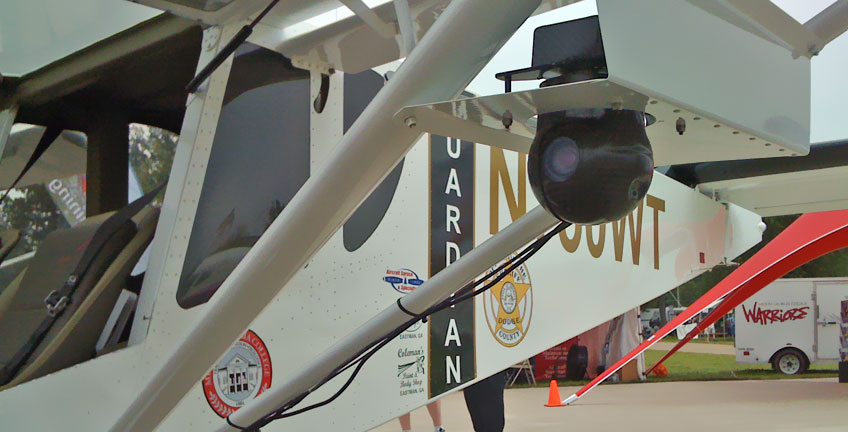 Custom interior with the camera equipment: 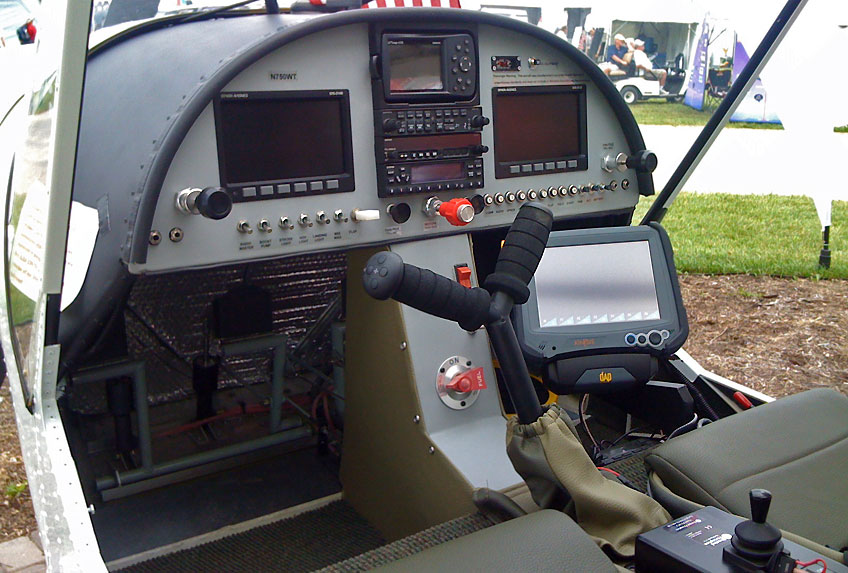 Walking back to the Zenith display I looked up and noticed these serious wing leading edge slats for STOL performance: 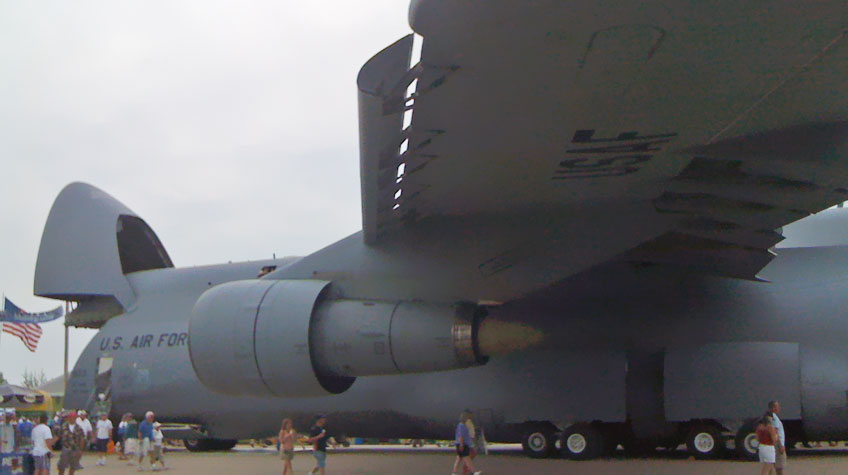 In summary, we had a great show at Oshkosh this year (despite the wet grounds). Interest in the STOL CH 750 continues to be great and we will continue to focus on this very popular model for now.

Since coming back from Oshkosh I've had several folks ask me if we were planning to discontinue the Zodiac CH 650 (CH 601 XL) model based on the fact that we did not have one on display at our booth during AirVenture and subsequent "expert" speculation on various internet chat lists about what our intentions were. The answer is no, we have no plans to discontinue the Zodiac CH 650 model. Sure, I wish we had one on display. Both existing builders and owners would have liked to look at a new model, and we had some inquiries about the airplane from new potential builders. Luckily, some Zodiac aircraft did make it in to Oshkosh, including David Gallagher's nice Zodiac CH 601 XL-B model.

Ultimately, the decision about whether or not we continue to sell the Zodiac rests with our customers: both existing customers and new ones. While many Zodiac builders and owners have now completed the installation of the "upgrade kit" and have returned to enjoying their aircraft, there also continue to be vocal skeptics out there. Some are soft-spoken doubters who have heard “something about accidents” but who have not actually read the related reports and who overlook the availability and the effects of the new upgrade package; others simply continue to feed the rumor mill with obvious malicious intent (often anonymously on the internet), casting doubts on the design, the company, our team, and anyone associated with us.

As it stands, even though it is offered as an "experimental" (non-certified kit), the design is now the most tested light aircraft design of its kind on the market, and it represents what is undoubtedly one of the very best values on the market today. This design has been scrutinized by the FAA and aviation authorities around the world, and we've performed extensive load tests, vibration tests, etc. that no experimental aircraft I know of has ever been tested to. While the design is not "brand new" it also compares very favorably to existing derivatives and similar new designs such as the Piper Sport / SportCruiser or the Vans RV12. And guess which airplane first introduced the extensive use of blind rivets, 6061-T6 alloys, the Rotax 912S powerplant?

Zenith Aircraft does not “discontinue” models once it has delivered kits for them. Since we support new models as well as older models, we always strive to have parts in stock for all models (and if not in stock we can build the parts quickly). We continue to support (and supply) kits for older models such as the Zodiac CH 601 HD and the CH 601 HDS, even though we do not currently sell many kits for these models.

A new Zodiac builder is getting a very high quality kit (being offered at a very reasonable price) for a design that has been thoroughly tested, not only by the designer/manufacturer but by many aviation authorities and outside independent consultants. I don't think another kit design exists out there that offers anything remotely similar. From a kit manufacturing standpoint, we continue to improve on the Zodiac 650/601 kit and associated drawings and assembly manuals (over the past decade) so new builders can benefit from this past experience and investments in production tooling and technology.

I believe that the Zodiac CH 650 offers excellent value in today's marketplace with excellent features and capabilities in a kit package this is both affordable and simple to build, and as such, we foresee a good future for this design.

Below are a few more photos of Zeniths spotted at AirVenture:

Camping with the planes:

Comment by Jonathan Porter on August 5, 2010 at 5:33pm
Wish we could have been there. Perhaps next year we will come and add an African flavour.... at least we will send you some videos of the 701 and (hopefully at last) the 801 in action in the bush.... Thanks for the support!

Comment by Richard Rost on August 4, 2010 at 10:15pm
Thanks for what I read as the Zodiac is here to stay. How about a mass Zodiac arrival next year. That would drive the nay sayers nuts.

Comment by Dr. Edward M. Moody II on August 4, 2010 at 12:42pm
Thanks for hanging in there with us through the tough times. It was great to see you at Airventure and I look forward to many more visits with you all as well as the accumulation of more hours on my XL.

Comment by Bob McDonald on August 4, 2010 at 12:08pm
Great report for us unfortunate enough to have to work (its a four letter word!) and not get to Oshkosh.