One Week Wonder - Chapter Two - A CAST OF THOUSANDS

Over the week over two thousands five hundred people were involved in the build - and signed the builders log - the worlds biggest builders log!  But it was down to a core team, and a lot of organization to make the week come together...

THE CORE TEAM:  This is the team that were practically full time in the Bull Pen - that place where the machine was being brought to life.  It should be noted that the core team had not met before the day... they didn't all know each other... they were different folks, all with very different strokes.  But, they all had one goal, to show the world that the Spirit Of Building Aircraft was alive, well and pulling rivets at Oshkosh 2014!

Let's meet the Core Team (if I missed somebody, please let me know!)

SUPPORTING CAST IN THE BULL PEN:  In addition, the Bull Pen had the 'overseers'; the Zenith Aircraft designer, Chris Heintz, 76 years young was there to keep an eye on things - pulling a few rivets and passing a critical eye over every aspect of the build of this new baby.   Retired, Chris's vision lives on through his sons, three of whom were actively present in the bull pen during the week, Sebastian (President and CEO of Zenith Aircraft Company), Matt and Nick (from Zenair in Canada).

THE AMBASSADORS: Ambassadors are people who have experience in building planes and work out 'front of house' to teach wannabe builders how to pull a rivet and answer questions.  They took shifts and worked the crowds... introducing many more people to pulling rivets than those who actually pulled a rivet on the aircraft.   EAA's Ron Wagner was in charge of the ambassadors, and it was EAA's Charlie Becker, Homebuilt Community Manager, who seemed to run around non-stop to make the whole project a 'go'.  Charlie made sure that everything ran smoothly from the air supply to the sandwiches - and a birthday cake - he was active in and out of the bull pen all week. 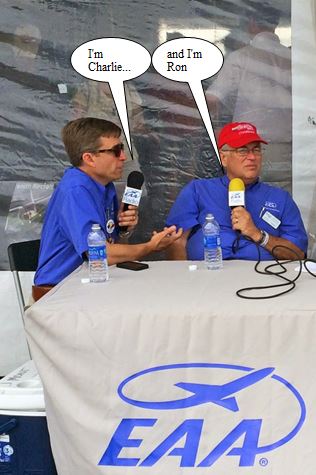 THE PUBLIC: What an amazing crowd that was... from freshly hatched babies through juveniles  to full grown humans.  They came in all sizes, boys, girls, men and women -  and from so many countries that the United Nations may have considered sending an official 'jealousy card'.  Seriously, it was as if the whole world had joined hands on this project.  They came and they filled the One Week Wonder with WONDEROURS moments.