One Week Wonder - Chapter Three - Day One - A Day of action

It was a tense moment, all of these people who didn't know each other - about to start in five minutes - building a plane in less than a week.  They all stood awaiting the starters orders... and then they came, from Jack Pelton, the EAA Chairman.  Jack comes from the illustrious aircraft manufacturer Cessna, and is now the leader of the EAA pack in feeding the worlds aviation spirit at a grass roots level. 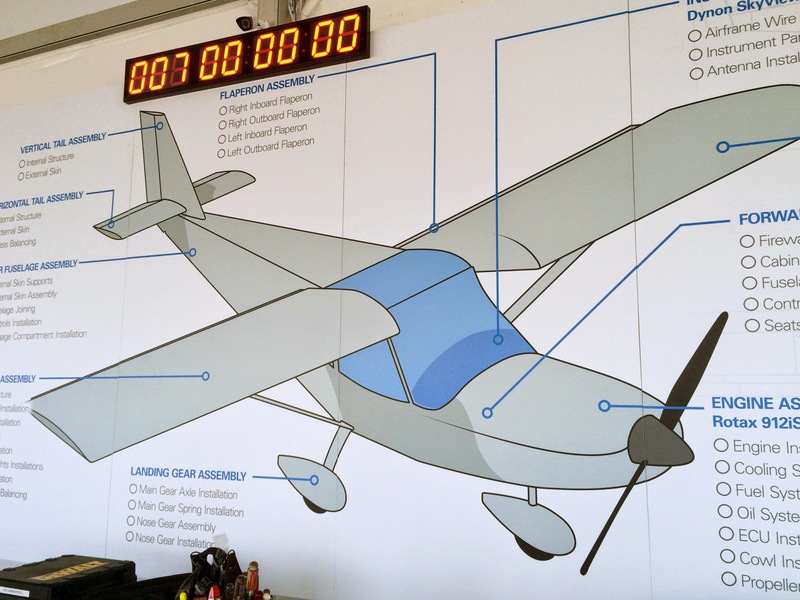 The crate was opened, and people watched... amazed to see that there were no surprises - it really was a kit of parts.  Nothing was pre-assembled... this was the real deal... a proper challenge...

As with all aircraft builds, it only took about five minutes before the first band-aid was needed -  a timely reminder that sheet metal must be respected - and also that these parts would need to be de-burred (the sharp edges from cutting and drilling removed). 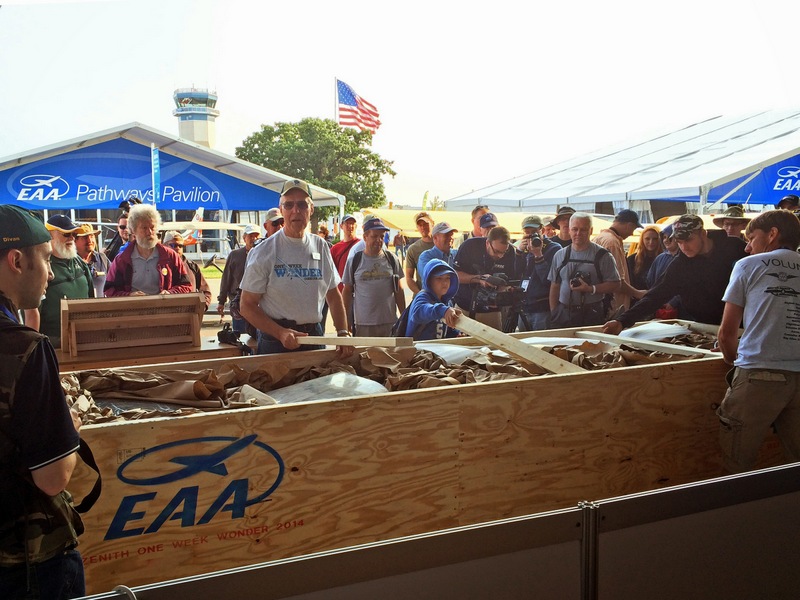 Parts were handed over the fence from the public area into the bull pen.  Each part had a part number sticker on it - which included a letter identifying which aircraft sub assembly they would belong to.  W for wings, R for Rudder, F for fuselage, etc.  The clock ticked by, and nothing but unpacking and cleaning up was taking place. Meanwhile, the Ambassadors started rivet training out the front of the tent.  The Zenith Aircraft series use a simple 'pop' or 'blind' rivet, fitted using a specially adapted head on a rivet gun that 'domes' the head of the rivet to give strength and aerodynamics. 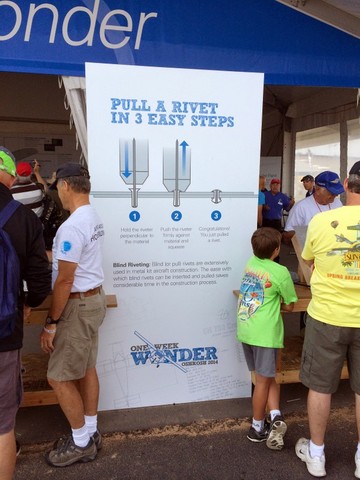 Volunteers were busy inventory checking and deburring, whilst others learned 'how to pull a rivet in 3 easy steps'.

There were nearly ten thousand rivets to be pulled in the week... and the vast majority would be pulled by volunteers - most of whom had NEVER pulled a rivet before.

On that first day the team were asked ''why do you call it pulling a rivet'... to which the answer is simple; the rivet gun (whether manual or pneumatic) literally pulls a steel stem through a specially shaped aluminum body to create a fastening between two or more pieces of metal.   At the end of the fastening process the rivet stem breaks off (since it is no longer needed) with a 'pop' sound... hence a 'pop' rivet.  That, of course, led to the question 'why are they sometimes called 'blind' rivets... to which the answer is 'you do not need to see or work on both sides of the work piece... hence you are working 'blind' to the other side'. (This is different to a 'bucked rivet where you need to have a rivet hammer on one side and a bucking bar on the other.)  Blind or pop rivets are one of the easiest, and amazingly strong, sheet metal fixations to set - and as shown, can be learned effectively in a very short time - by those of all ages and strengths!  Each type of fixation has its advantages and disadvantages, and the aircraft designers must choose.  Thankfully for the One Week Wonder Team, Chris Heintz was more interested in building strong planes that would build and fly well quickly, using the pop rivet system!

The clock ticked on, and the people who were learning how to pull a rivet were getting impatient - since there was no rivet pulling taking place!  The team in the bull pen were still not ready to have any rivets pulled... 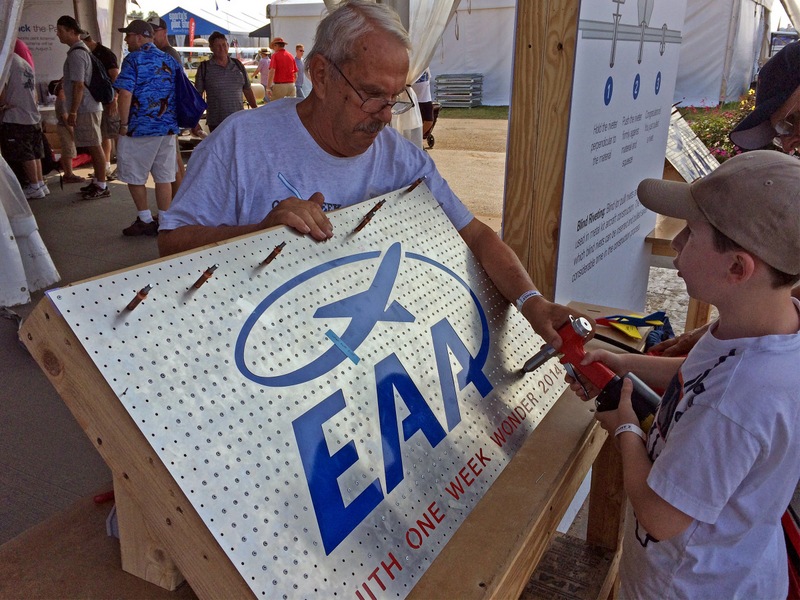 Then, as if by magic,  but really by virtue of the Zenith 'match hole technology', sub components started to come together.  The holes in each part of the standard Zenith CH750 kit are pre-drilled to final size by very accurate CNC machine tools at the factory, prior to shipping.   Once you have identified the correct parts to match up, using drawings and a comprehensive photo guide, you simply  'Cleco' the parts together and check that it all looks right (according to the drawings!).

The Cleco (so called because it was originally designed by the  Cleveland Pneumatic Tool Company) simply acts as a temporary fixation.  You can see them on the top of the practice sheet above, and all over the parts in future images.  They simply clip into place, roughly in every third hole, to hold the pieces together waiting for the rivets to be pulled to make the final assembly.  Once rivets are pulled in the holes between the Clecos, the Clecos are removed and rivets take their place for a final, complete, and very strong structure. The first afternoon actually saw quite a few pieces come together, and the FAA (Federal Aviation Authority) were keen to see how this was all going to happen.  The team pulled those officials into the bull pen to help!  Some FAA staff members were quickly pulling rivets on a fuselage panel, working between the Clecos.  Each volunteer puller was asked to sign their rivet also!

To add to the challenge, a group of young people worked on the horizontal tail (that is the horizontal stabilizer and the elevator), led by Patricia Mawuli.  Patricia is relatively new to building aircraft, having grown up in a mud hut in West Africa, fetching water on her head each morning.  Just eight years ago she asked for a job on the Kpong Airfield in Ghana, and learned to build, fly, and maintain aircraft.  (She is also a flying instructor and  Rotax iRMT instructor!) 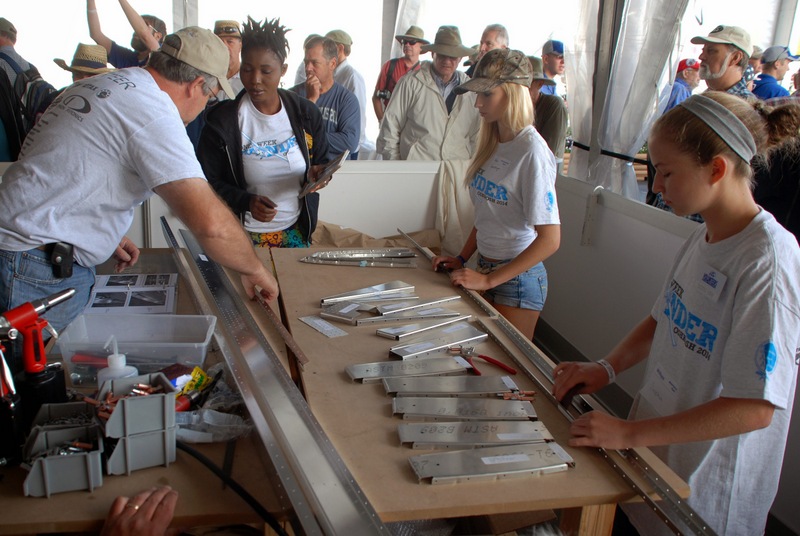 Not only was this build international in flavor, but it was also about family unity, and the Rudder team had a grandfather, son and grandson working together on it.  That family already planning to build their own CH750, and this was a great moment for three generations to volunteer into the bull pen as part of the One Week Wonder!

To ensure that the project was on track, the back of the bull pen had a progress chart, surmounted by the countdown clock... Each sub assembly was ticked off as it was considered complete during the build.

By the end of day one the teams had achieved

After ten hours straight building, everybody was happy... tense, but happy.  The team, volunteers, ambassadors and general public all headed out to find something to eat, to sleep and to prepare for the next day.