When the team arrived on day two they looked over the work from the day before... and noticed some mistakes.  That happens on EVERY build.  Every builder makes mistakes, so having some mistakes in One Week Wonder was to be expected... The mistakes were minor.  Not all the rivets had pulled well - it happens - and some had been pulled that shouldn't have been yet - that happens too!  So, as the volunteers for day two were lining up, the core team set about some minor fixes.  It should be noted that even on the airliners rivets get drilled out... in all honesty  thousands of them!  So, to drill out a few rivets on a CH750 being built in a week is nothing exceptional.

It is easy to do, just position a drill with a drill bit of the original hole size over the rivet head, and drill off the head.  This is made even easier by the Zenith domed head rivet system.  Then, you can simply 'punch the old body out', and hey presto, you have fixed the problem!

It didn't take long for the team to correct the minor mistakes from the day before, and then the building could be picked up once again. 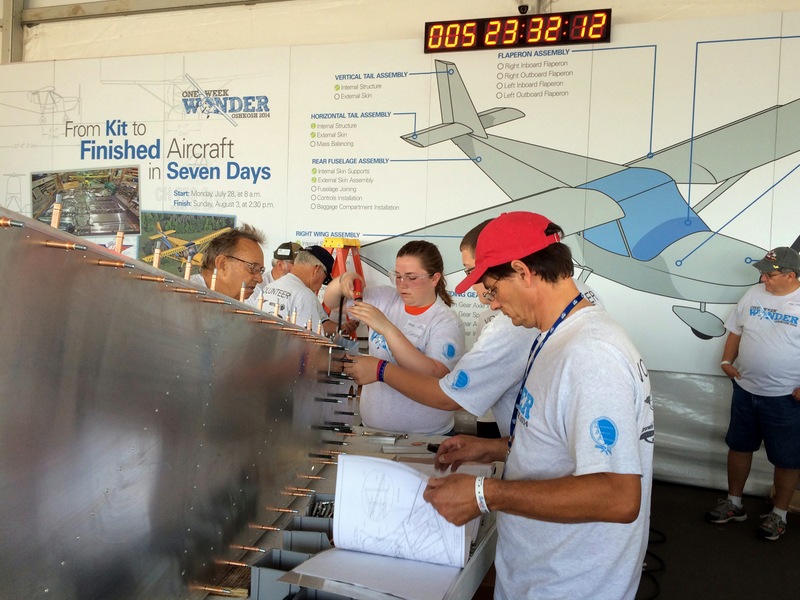 The interminable clock ticked down, and the new set of volunteers in the bull pen had to quickly catch up with the concepts from the day before.  All the same, sub assemblies and milestones were being met with increasing frequency.

Industry leaders and celebrities came by, as the One Week Wonder news spread across the airfield site.  The Spirit of Building Aircraft insisted that these visitors to the event were drawn in and engaged in assisting the production of this new machine. 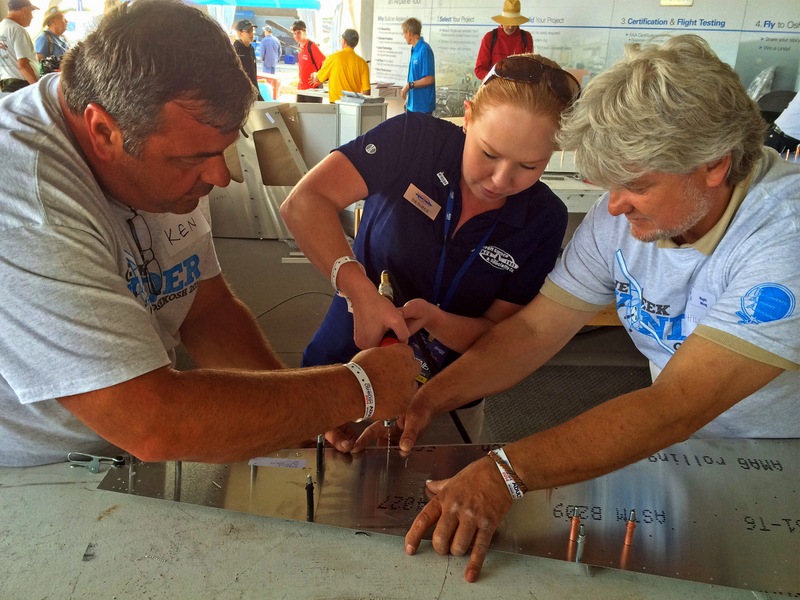 Whilst Chris Heintz worked hand in hand with Patricia on pulling rivets. As the tempo built, the sponsors of this project suddenly realized that is was bigger than they thought and came around to encourage the teams to 'Keep Calm and Build the Plane'. As the day progressed, complacency was starting to build.  It looked great - it looked as if completing in one week was going to be easy.  But the team had to keep reminding themselves that the devil lives in the details... and as the day progressed, the build seemed to slow.

The 'big sections' had come together in a breeze, but the wiring, the plumbing, and the joining together.  The setting of all the controls were still be done.

The firewall forward team were being very quiet as they were now fitting the expansion tank for coolant and other necessary items for the engine in place.   Day two saw many people get to pull rivets, but not as many as should have. 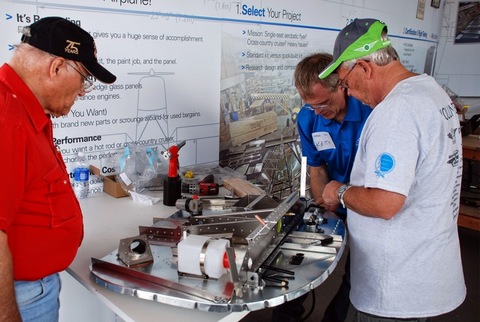 And so the day came to a close with a very tired core team and just five days left to complete the machine.

By the end of day two, the right wing appeared to be running behind schedule - it was desperately needed for folkst to start pulling rivets en-masse... but a good cook is never rushed, and those wings had to be done right.

The horizontal stab and elevator were all but complete - but not balanced... and it was left with a number of rivets unpulled for the crowds to participate in.

The Vertical stab was finished, as far as it could be without mounting to the fuselage.

The two fuselage halves were almost (almost is a big word when you are building an airplane!) ready to be joined together (mated to be more correct!).

The firewall forward team looked stressed, so we didn't ask too much about that side of things. As you say to children who taunt large dogs 'stay away if you want to keep your fingers!', and let's be honest, there was a lot of pressure on the firewall forward guys - they needed an airframe FIRST before they could start their work.

It was not as exciting as day 1... but it was exciting in seeing how stressed people could become about that ticking clock!