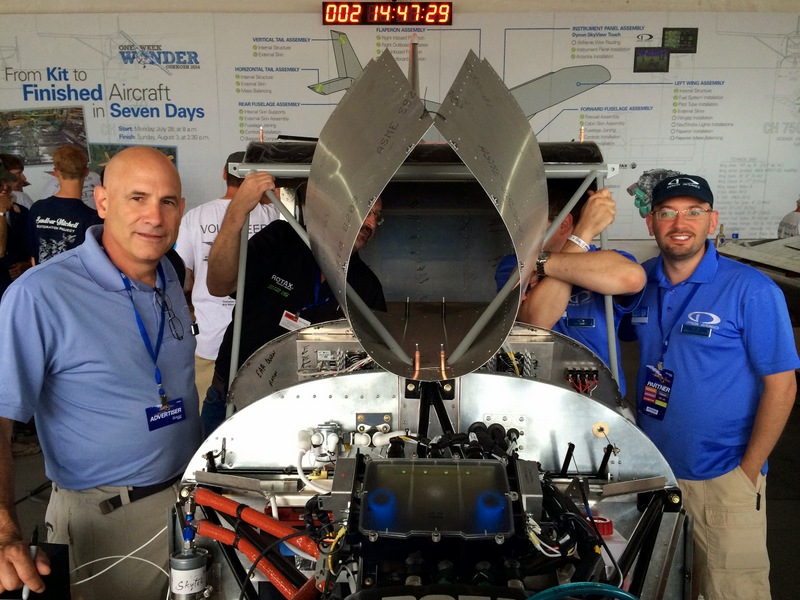 everybody finally realized that somebody had been lying to the team - that clock was not right.  This was not anything like a seven day challenge.  Seven days would have given the team until 08:00 on Monday morning... BUT the organizers had this hidden agenda... the plane would be INSPECTED on the SUNDAY by the FAA... and needed full FAA certification before 15:00 on that very Sunday... so that a public taxi test could take place!  They needed to knock 17 hours off of the countdown!

With neither wing completed and the firewall forward team talking about 'when are we going to test the engine'- and 'The Caleb' saying "on Sunday morning" added to the stress - as did the ever increasing interest from the press and the public... Friday was a stressful day.

Jack Pelton came by and offered words of encouragement - saying that 'If Cessna had a team like this....', whether it was humour or fact, it was clear that Jack was impressed by the achievements... The vertical stab had to be fitted, and the elevator cables routed.  Clearances were tight, and a lot of discussion was taking place at the tail end.  This was not helped by the fact that the cockpit crew kept hitting the stick, and then the levels were all off for setting the deflections.  Never before in the building of an aircraft have so many people exhaled deeply, and not shouted at each other!  Patience pills must have been slipped into the drinking water for the core team without their knowledge...  Shouts of 'NOBODY TOUCH THE PLANE' were common place... BUT the tensions were growing on the riveting teams outside too. 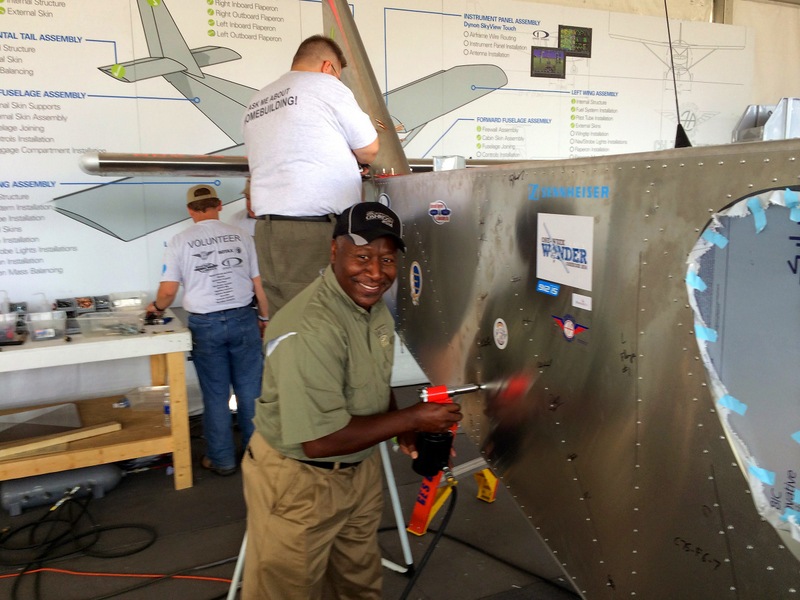 With a wing on the outside of the bull pen still being riveted off, the team on the inside wanted it finished to work on - but the public still wanted to pull rivets - and so the question was raised...

'Is this about building a plane in six and a bit days, or is it about inspiring the next generation of aircraft builders?'...  Yes, it was both... but the second aim was the real one - that was the desired impact of breathing the Spirit Of Building Aircraft into the air at Oshkosh 2014.   That aim had already been met... The bull pen team remained oblivious to the facts, and pushed, pulled and ran wires relentlessly against the looming deadline.

Small children came with their parents - some too small to reach the rivets, needing to stand on the backs of volunteers who bent down to provide a make shift ladder for the future aviators and engineers of the world... 'Standing on the shoulders of those who came before...' took on a new meaning - and the shouting of the 'One Week Wondeeeeer' mantra grew, in volume, in numbers and in energy.  Patricia worked on the wing tip electrics OUTSIDE, whilst the public were still riveting off the wing.  This build was 'in the public domain' in more ways than had ever been anticipated.

As for any child, first words are special.  So, when Charlie Becker wanted to test the radio, we all knew that the Electronics team were under pressure too.  The Dynon team came and watched, checked and made sure that the near IMAX experience cockpit was set, and then silence was called for.  It was time to test the electronics.  Charlie, with the widest grin of the week to date, called the tower and asked which frequency to use for a radio test... He read it back, and members of the public tuned their handhelds so that they too could listen.  Using a twelve volt DC external supply the whole system was then powered up... The tension in the air was so crisp that you could snap it in your fingers... Then, Mike called 'we are waiting for the screens to boot'... and we waited... and waited... but they failed to boot.  Something was wrong.  Charlie stopped smiling for the first time in the whole week.  Silence hung in the air for a few seconds, heads dropped, spirits sagged... Disappointment swept over the team and the whole crowd exhaled in unison, with a slight noise, reminiscent of a balloon being let down.  The electronics team went silent as their eyes and fingers moved at speeds only to matched by electrons in a hurry.  This build was following the actual events of any build

all that was missing now were the final two phases,

Ten minutes later, it was time to try again.  The electrical bus was powered up, and the first screen booted... it came alive, in Technicolor... a light, still unsure if it was real, cheer came from the crowd... then the second screen lit up likeTimes Square on New Years Eve... then the intercom permitted 'alive noises' between the Sennheiser headsets... the crowd seemed to be powered by a much greater voltage than the 12V bus of this plane.  The whole team took energy from the moment.  Success and exhilaration were now within the grasp of the One Week Wonder Team, the crowd and whole Spirit Of Building Aircraft! 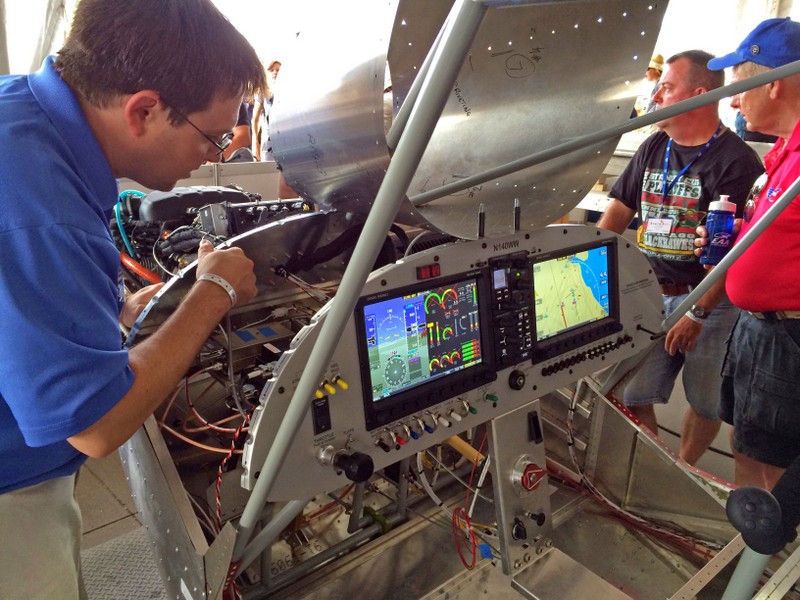 Silence was called for, once again, as the first radio call was to be made... The call was relayed over the intercom - and as the tower acknowledged clear comms, the shout of ONE WEEK WONDEEEEEER reached every corner of Wisconsin!  The electrical team were happy - but there was much to be achieved still.

Caleb really wanted the wings on the plane by Friday night - but it was not going to happen.  There was too much pressure and not enough hours - and all that electrical stuff had eaten up access time to the airframe too.

The day ended with everybody tense about the remaining full day and how much had to be achieved.

Saturday was going to be a busy day... but that is the next chapter...