Saturday morning was a blur.  Nobody could remember their own names any more - let alone whether they were coming or going...  It was as if those 'patience pills' were affecting memory too!  Thankfully, between everybody, everything was being accounted for, but the team were visibly slowing down.  Caution was being applied, because everybody knew that it was better to miss the deadline than make a mistake that could jeopardise the long term benefits from this punctuation mark in aviation history.  Measure twice and cut once was the order of the day. 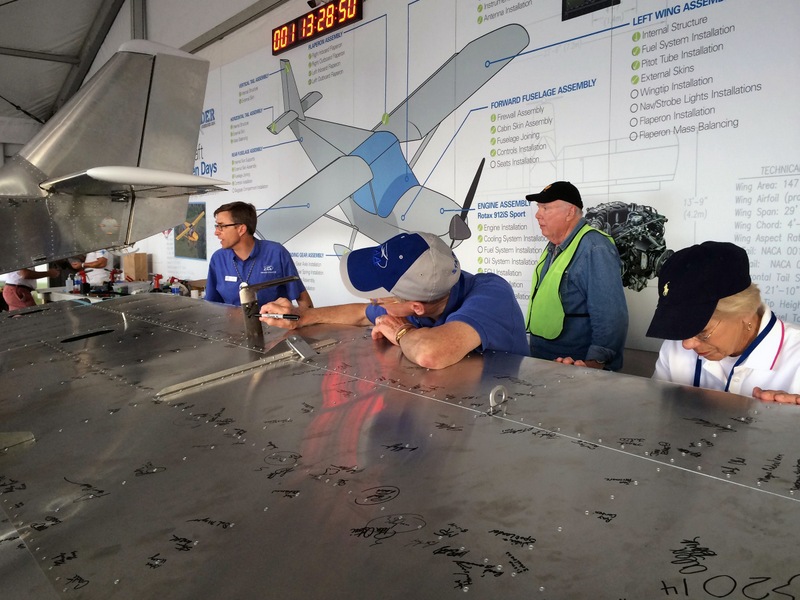 Doug the scratch builder finished mounting the flaperons and setting the washout - even if new pieces had to be hand made after a slight error... again the advantage of building with sheet metal and proof of such a great design.  Final touches were made to the wing tips and lights... but the bull pen would then need to be rearranged.  For some reason the right wing was on the left of the plane, and the left wing was on the right.   Moving wings around in a smallish bull pen with spectators, volunteers, press and pipe and drum ensembles can only be likened to working on completing a Rubik's cube, in under five minutes, one handed.

Up, down, left, right, duck, dive, turn, lower - and watch out for the pitot tube connection on that left wing... it wasn't mayhem, it was co-ordinated, but it really was an extraordinary dance.  Now, with the wings on the correct sides, the wind shield had to be fitted, and the windows... and the header tank... and, then that final life giving liquid couldn't go into the machine until wings were fitted, set and plumbed - and with barely one day left to run to the clock whispering loudly  'YOUR TIME IS NEARLY UP'.    The team grasped better the meaning of a Damocles' Sword, for it seemed to be swinging wildly above the team on that final stretch laying between where they had reached and an FAA signed off, taxi under your own power aircraft!

It was decided that the wings would be fitted INSIDE the bull pen, dihedral (angle up to increase stability) set, and then they would be removed and refitted OUTSIDE, ready for final plumbing and engine testing.

Setting dihedral is relatively simple, you level the plane (letting a bit of air out of the relevant tyres is usually enough to make it right), then offer up the two wings, drill the wing roots to the cabin frame, and then set them at the correct angle to each other, and the cabin frame, as well as the planet.  Of course, it become a bigger challenge when time is against you, and you have a few hundred people and a media team watching. Nonetheless, able bodied wing holders held those wings in place, whilst the angles were set and the wing struts (chunky aluminium extrusions) were cut and set to length for the desired angles.  (Nobody had a free hand to photograph the inside setting, so we seem to only have the refitting outside photo available)

With the day slipping away, and just a few rivets left to pull, it was time to take the wings off, and cordon off the outside area where final works would take place, ready for inspection in less than 24 hours. The sun was slipping lower in the sky, and Melissa Pemberton's Edge 540 could be seen tumbling downwards over the runway, just a few hundred yards away.  Melissa was opening the Saturday night show, and with it she marked the start of a long evening of work for the engine team.  Plumbing, wing roots, prop, header tank and a host of little bits suddenly, finally, COULD take place, in the failing light.  Floodlights were run out and the amazing gift of mains power provided 'night sun' brightness to those who would burn their candles at both ends in the sprint towards the finish line.

Much later, as they worked on, and the night air show crowds departed, Melissa came by to see how the One Week Wonder was coming along... A pleasant late night support from the famous Air Show Performer, who had been following the progress of the One Week Wonder...  Perhaps she spotted it coming out of the bull-pen in one of her twists and turns?  It was a sight to behold after all!

Would it all come together in the morning?