Day three was always going to be the day when we got an idea of where it was all going.  Everybody was tired, already.  The sprint had been done, and the plane looked like a plane... well almost - but this was not the time to give up - we had to hit the wall and keep on building! Work started on the flaperons, but it did not go fast.  There was a bit of confusion about the arrangement of the ribs v the tips - and the flaperon team went through several iterations to get it right.  The volunteers really wished that the ribs for each side were more easily identified... as they shuttled parts back and forth across the table, in a fashion to make Joseph Jacquard jealous. Just like any build, something that looks simple can be deceivingly challenging!

The Matco wheels were fitted - assisted by the Matco team themselves.  It is always great when component suppliers are helpful, but it is special when they come personally to a project to see their product being put into use!

The mating of front and rear had to happen on this day.  It was a non-event.  The 750 mates really effortlessly! 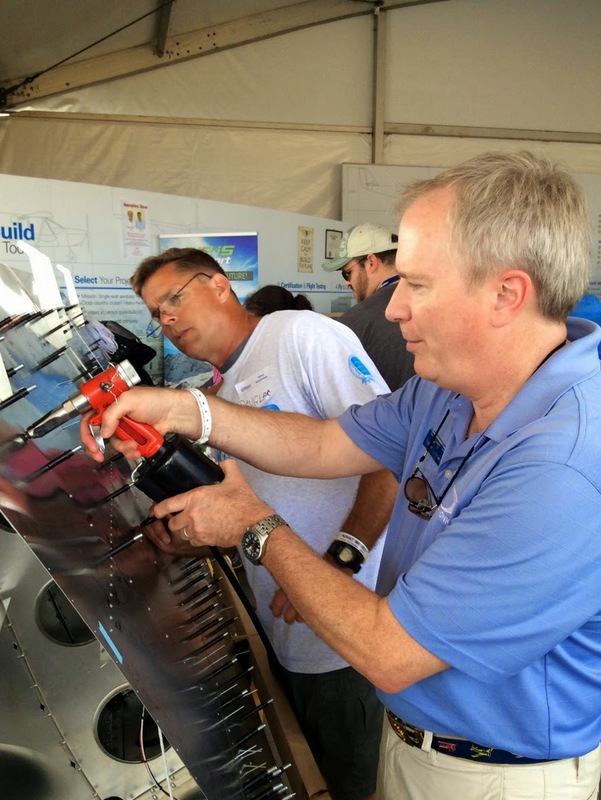 The right wing team seemed to surge ahead at this point, and completed, minus a few hundred rivets, the right wing...and it was sent outside for 'public rivet participation' - albeit that they had not completed the wing tip wiring AND they had riveted off the wing root - which shouldn't have been done.  A lesson learned for the left wing - for which parts were already being laid on a bench for!

Later in the day, the plane had to find its feet - and it did so with music from the US Border Patrol Pipes and Drums ensemble.  They added a great deal of much needed pomp and ceremony - a boost to the team, raising spirits and pushing the project forwards.  It also brought more interest from the crowds as they heard the bagpipe noise - I mean music, and came to see this new baby of skies reaching a critical milestone.  They struck up their melody (it actually brought some people to tears) at the moment the wheels touched the ground for the first time.... the joy could only be compared to that of a parent watching a child stand unaided for the first time in its life.

The firewall forward team then swam across the bull pen like a shoal of piranhas.... they wanted to hang that 100Hp Rotax 912iS Sport engine on the front.   It was a tense moment, as it always is... The engine mount looks so fragile with just four bolts holding the engine to the airframe... and so, the crowd grew - watching for that moment when the nose wheel stretches the nose gear bungee and the plane sits like a patient, and well behaved, dog, waiting for the masters orders to leap... (except that there were no wings...)

Plumbing of all the radiators and wiring was now 'top priority'.  It looked like cardiac surgery with all the different people peering into the various orifices, some with pliers, other screwdrivers, and then Rob turned up with a bottle of pink coolant - reminiscent of a blood transfusion.... Life was being breathed, pumped and wired into the One Week Wonder. 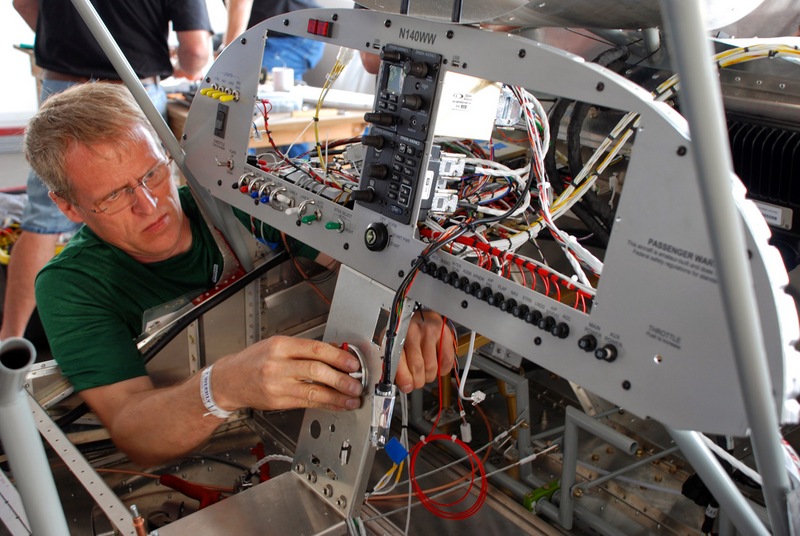 Being a 'proper looking' plane the machine got more and more attention. The build crew's spirit was raised... we were 90% complete - if you looked at the project visually, but still had 90% left to go if you knew what was really to be done!

With the flaperons completed, sitting ready and waiting for a completed wing to be hung on - all control surfaces were just waiting to be added to their right places.  Dr Frankenstein would have been proud of the team... If the tent had been struck by lightening, who knows what may have happened that night!