With all the 'smaller surfaces' completed, day four was a day of looking for jobs for the core team not involved in the fuselage or left wing - there was no shortage of tasks - event the clearing up and sorting out the tools that had managed to have a party and get muddled up!

For those who had built Zenith Aircraft before, this seemed like an easy build - until they all realized that this was a CH750 Cruzer - so it was different.  With less than a handful of Cruzers flying at the time this plane was built, the team discovered that the detail in the design was new in many areas.  One thing that was new to everybody was 'balancing the elevator and flaperons'.

Caleb kindly gave a team of volunteers a set of weights and said 'balance the elevator'.  Easy... well... it would have been better with a drawing and some instructions... ('We are working on them' was the comment)

Nonetheless, the principals were quickly established - and once initially set up, a quick eye over by Chris Heintz himself was proffered - who without a word simply used the following procedure:

1. Watch the team from a few yards away

2. Walk up and take hold of the elevator and hold it in the neutral position

3. Let go gently and see how well it 'stays in balance' (which it did)

4. Smile broadly, nod, make a happy 'hu hmmmm' sound and walk away to see the next item.

That is the inspection method of the 'man himself'.

The team realized that they needed to make sure that the weights were bolted in a particular orientation (they can go two ways) in order to enable sufficient movement of the control surface.  Everybody was learning together on this one - and it was a moment of positive pride for designers, volunteers, core team and the factory gurus. Talking of weight... the fourth day was the 'day of cake'.  Patricia Mawuli, from Ghana, had her birthday at the event!  Unbeknown to her, everybody knew it was her special day, and Charlie from the EAA had organized a special BIG cake for her.   So we all got to sing, eat cake and to balance something - ourselves gaining wieight!

As the day progressed, the horizontal surface was moved to the airframe, and bolted on.  Time was taken to ensure that the surface of the horizontal stab was aligned with the cabin frame, and then work started on how to set up the control wires for proper elevator movement.  This was complicated by people working in the cabin area!

The team tasked with fitting the flaperons to the wings got stuck in, until they found that they lacked a certain size drill bit for an angle head drill.  Some quick running around and the kindness of the lady on the Avery Tools stand, and the right size stubby bit was in hand.   Next up was the disaster.  Having used the new, correct tool, to drill the hole for the bushing, the same drill was used on the Flaperon extrusion hinge... MISTAKE.  Fortunately, the mistake was spotted after just one wrong hole was drilled.  But this was a critical mistake and needed fixed.  If the team had some more bushing material, it could have been overcome by a different bushing... but there wasn't... So, it was 'fix it time'.

At this time, another Doug joined the build as a volunteer.  Doug is a serial scratch builder and was ready to 'fix it'.  Expertly, the flaperon segment was drilled open, and the wrong sized extrusion hinge drilled out, and replaced, then the flaperon riveted together again and drilled to the correct size.  The joys of a metal plane with pop rivets!  They are so forgiving, and anybody building a Zenith knows that, when necessary, 'calling the factory with a confession' is always a good plan!

The firewall forward team added hoses, clips, lines and another fluid to the mix; oil.  There are three fluids necessary for a Rotax 912 to live... Coolant, Oil and Fuel...  Coolant and oil were in the beast, but the fuel seemed a long way off... and it was.

Finally, the cowling appeared to be 'fitted' but not fixed.  The team were happy that it looked like the deadlines might actually be met...

The day was punctuated by some great visits - visits that boost all with a spirit of aviation around the world. The fact that Michael Heurta, the head of the FAA came to visit, talk to the team, pull some rivets AND sign the builders log, made everybody smile - especially Sebastien Heintz from Zenith, 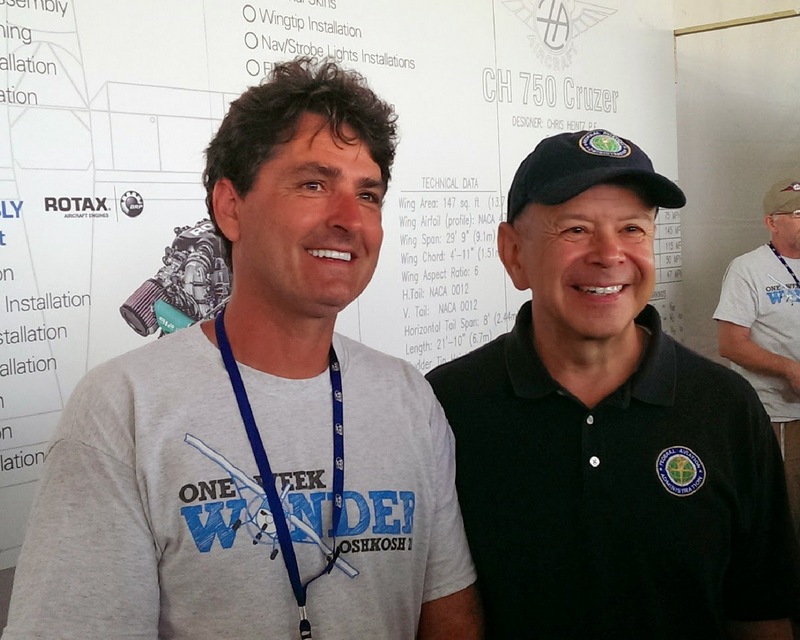 Then the Aircraft Spruce family couldn't resist coming by to pull some rivets too! 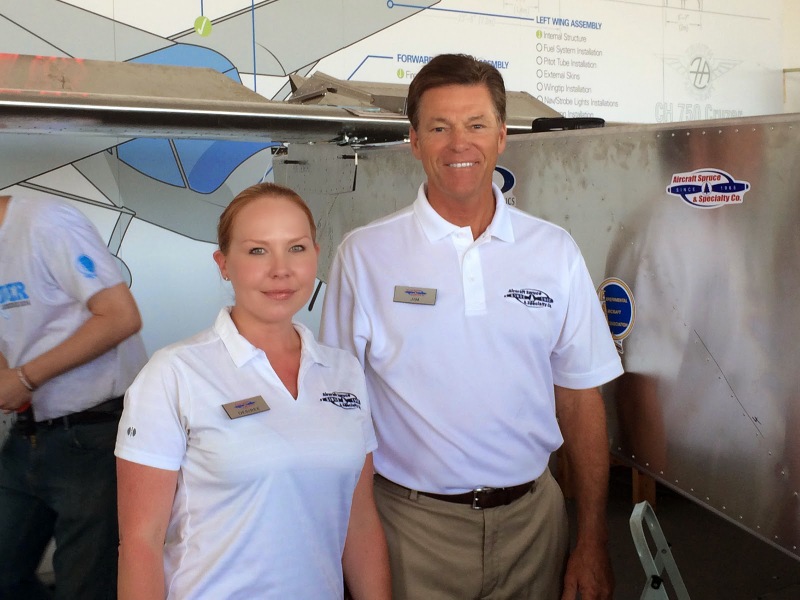 As well as some veterans from World War II with stories to tell! 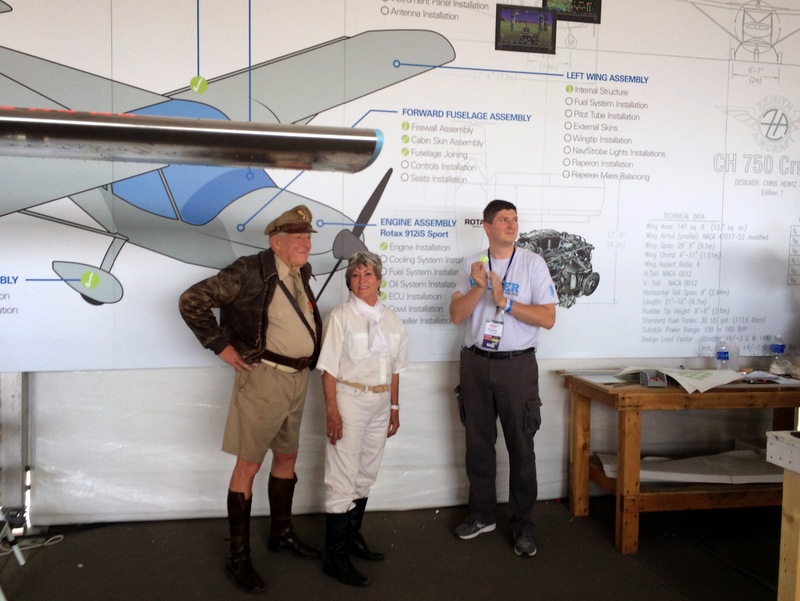 Since your blog is titled "Day Four - The day of Cake" here's another cake, though it was presented the following evening at the Zenith Builders Banquet (thanks to Joe Scheibinger): 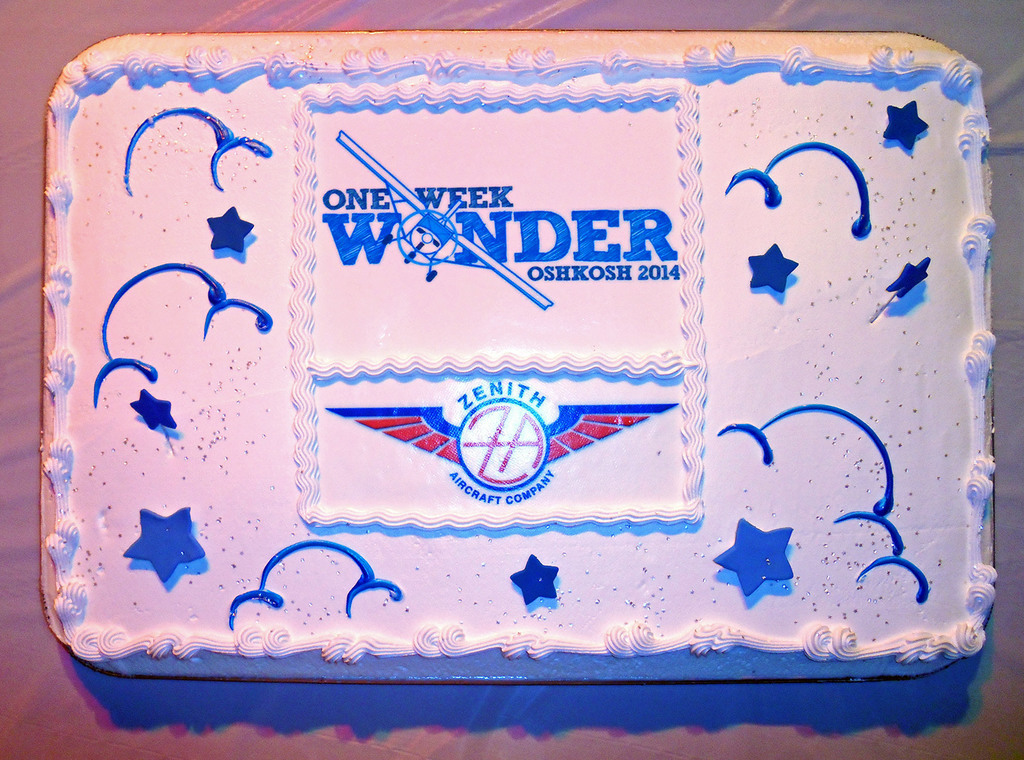 The cakes with the Heintz family at the Zenith builder banquet at Oshkosh 2014: 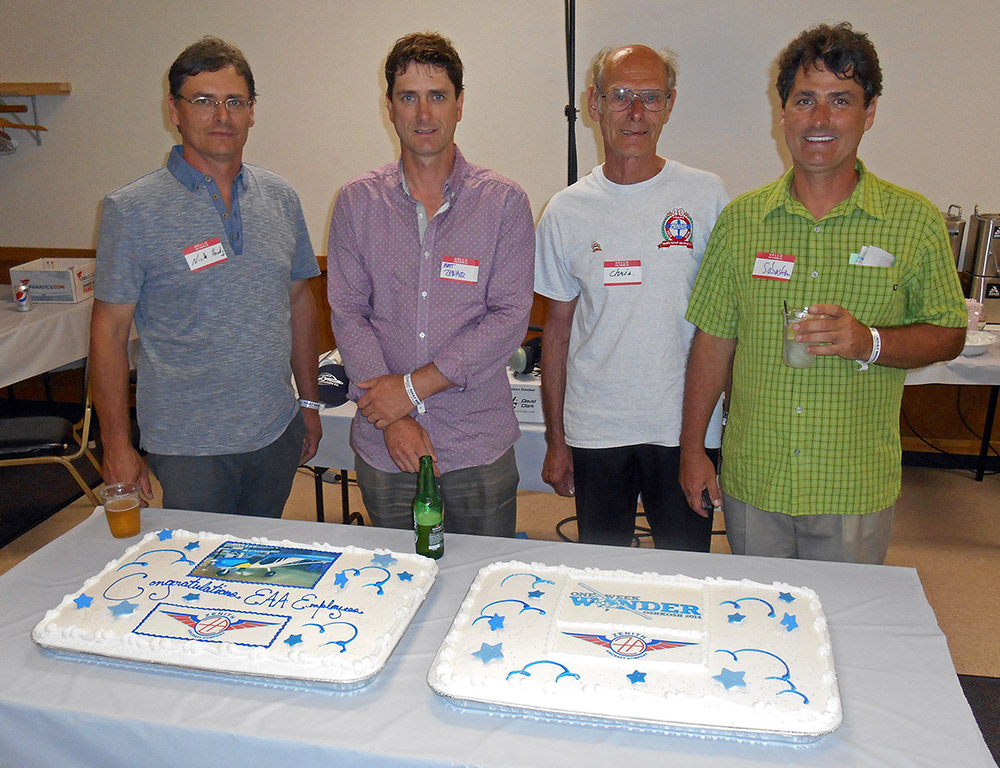