Zenith Aircraft developed a new nosegear shock suspension system for the Zenith CH 650 / CH 750 series kit aircraft that uses stacked rubber shock disks (or "donuts") as an optional replacement to the single nosegear bungee shock cord ring (that has been in use since the 1980s). Using these stacked silicon rubber “donut” disks, the new shock suspension system is expected to last longer and to provide increased shock absorption, while also being adjustable to allow for increased or lowered tension (to better accommodate different engine weights on the nosewheel).

Watch the video with an explanation on the new nosegear shock suspension system:

Note that the standard shock suspension system kit does not include the nosegear strut (leg). The existing nose gear strut needs to be modified (the welded bungee retaining tube needs to be cut off and the holes can be welded closed). Zenith Aircraft can modify your existing nosegear strut (for $116.00) or you can purchase a new nosegear strut (cost $194.00). Note: For the STOL CH 750 model, be sure to specify Flat or Rounded nosewheel fork if purchasing a new nose gear strut. If you have an earlier Flat (square) nose wheel fork on your STOL CH 750, now would be a good time to update to the rounded nosewheel fork system. Call for details.

Installing the new nosegear shock suspension on the Zenith CH 650: Detail view of the prototype installation: 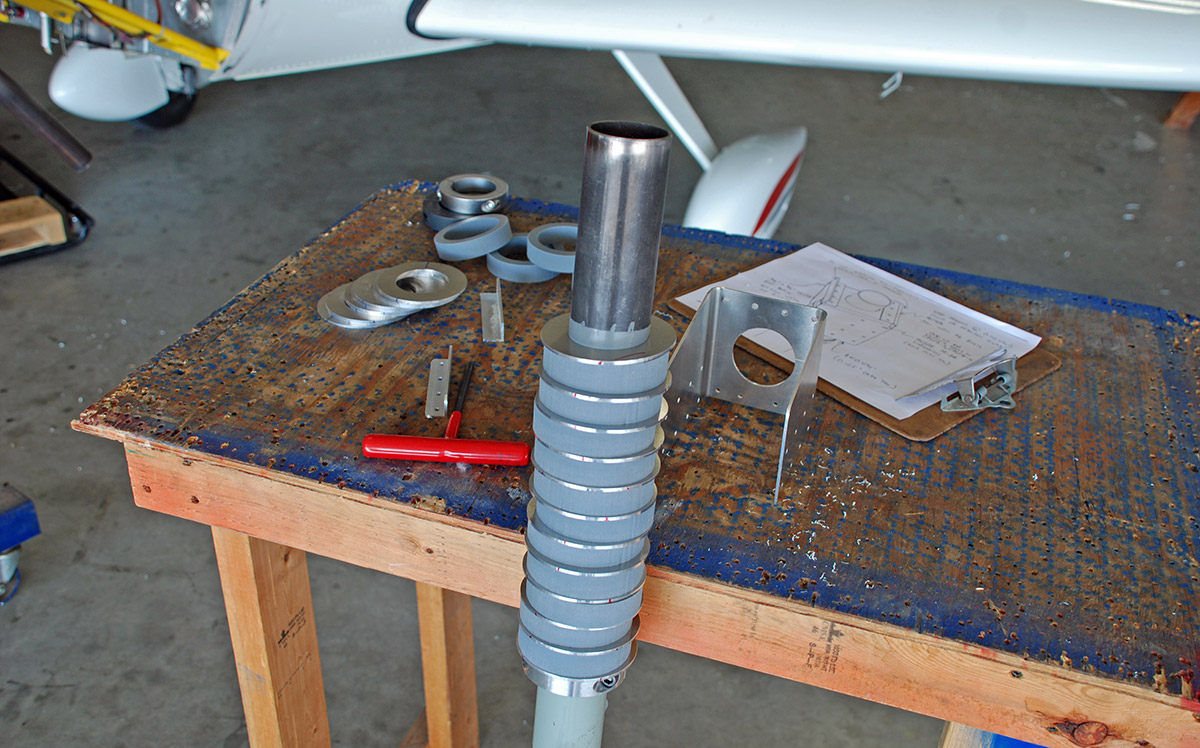 Installation of the new nose gear shock suspension on the Zenith CH 750 Cruzer:

Note: Prices in U.S. Funds. Crating, handling and shipping charges are additional. Availability, prices, equipment and conditions subject to change without prior notice.

Note: The new nose gear shock suspension is currently not available for the STOL CH 701 model.

Comment by Andrew on December 5, 2018 at 11:13am
Iim wondering if i can replace the main gear on my 601 HD with the newer spring type XL gear. Any thoughts?

Sam: Please contact Roger at Zenith about obtaining the materials (rubber donuts and spacers) for retrofitting your CH 801.

I notice that the parts list shows 10 donuts, but the pictures above show 11 donuts installed???

Sharp eye, Jay!  My STOL 750 kit came with 10 donuts as depicted in the drawing. I also noticed that one of the 650's installation photos shows an extra aluminum spacer above the last donut and the drawing does not.  My kit's assembly instructions called for a spacer above the last donut, but only 10 spacers were included with the 10 donuts.  I verified with Roger at Zenith that the drawing is correct - you don't need a spacer between the last donut and the upper stop.  In another assembly photo above, it looks like they deleted the extra spacer when they actually installed the assembly.  However, I don't know why they used 11 donuts - the 750's suspension is plenty compliant with 10 - maybe they were still testing different numbers of donuts when that photo was taken. The donuts pictured are a different color (gray) than mine (black) ... maybe a different durometer? I have a 801 and would like to convert it the donuts too.

I notice that the parts list shows 10 donuts, but the pictures above show 11 donuts installed???  Maybe there is room for more on the 801????

Thanks for the info.

I want to get rid of the front bungee on my CH801 REALLY bad and really soon.  I know that there may not be a large enough market to justify engineering a retrofit for the CH801. But if you could please point me to the people who make the rubber donuts and spacers I will engineer my own and be glad to share the results.  But I can't find rubber donuts of this size anywhere. Every time I land, I grit my teeth hoping that I will not have yet another random bungee failure with no warning signs.

Does anyone know what the OD of the 750 nose gear strut tube is?  If not too far off from the 801 nose strut dia. I could possibly increase the donut ID slightly.  Or if the dia. difference is too much obtain the same OD tubing as the 750 uses but in a heavier wall thickness to get adequate bending strength. Other than reinforcing the structure to carry the different load path (the easy part to engineer) it might be be a matter of just how many donuts and the proper amount of preload to use to get the proper stroke and spring rate, as long as the design crush strength of the donut is not exceeded.

Also would one of you care  share the typical load on the 750 front gear when doing empty weight and balance weight in?  That would give me an idea if using the 750 donuts for the 801 is even remotely possible.

I've got several hours and quite a few take-off's and landings with the new "donut" system. The rudder pedal effort is minimal and smooth - feels like they're on ball bearings and the system is more solid and quiet with a nicely dampened rebound - feels like a hydraulic shock system.

Yes, we will have the drawings (blueprints) available in our next edition (revision) drawings

Since I am  plans building, are updates to the drawings available to fabricate these parts?