Since announcing that we'd purchased the assets of SAM Aircraft earlier this year, Zenith Aircraft demo pilot Roger Dubbert and I recently traveled to Zenair Ltd. in Midland, Ontario, Canada to fly the prototype aircraft (that my brother Nicholas had previously flown back from Quebec). The purpose of the visit was to fly the aircraft and to have a better look at its construction, configuration and overall appearance and continue on with the discussion of when and how to integrate this outside design into the Zenith line-up of aircraft. Since the prototype airplane has already undergone a very thorough professional flight test program and Zenair had also already flight tested the aircraft (before flying it back to Midland, Ontario), our mission was primarily to see how much we liked this new design, both in the air and on the ground, to help us decide how to best re-introduce the aircraft.

Roger (right) and me at Huronia Airport in Midland, Ontario, Canada:

After basic transition training in the new aircraft with my brother Nicholas, we flew the prototype SAM Aircraft from both the front and rear seats to become more familiar with it.

Aircraft configuration / equipment: The prototype aircraft is as configured by Thierry Zibi, the founder and designer of SAM Aircraft, and was used for all the original flight tests.  It's configured as the LS (Light Sport) model with the lightweight 100-hp Rotax 912 ULS engine and ground-adjustable Sensenich propeller. The LS model is optimized for the U.S. Light Sport Aircraft category with a gross weight of 1,320 lbs and a 28.5 foot wingspan. It's configured to be piloted from the front seat with controls and instrumentation located there, including a 10-inch Dynon SkyView. The back seat was equipped with center stick, rudder pedals and throttle control (and no instruments). 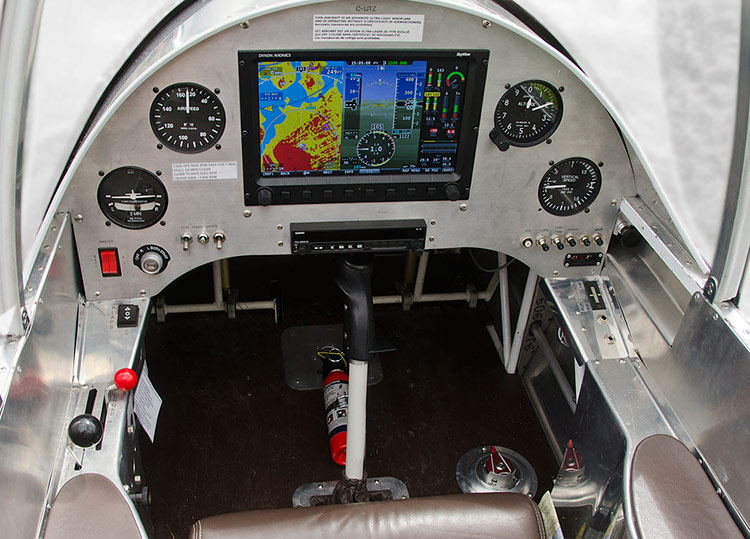 Entering the airplane is the opposite of the low-wing Zenith CH 650, with a step located forward of the left-side leading edge, making it quite easy to step up onto the wing walkway area. The canopy itself is easy to open and hinges on the right.  Stepping in is quite easy, especially when stepping down onto the seat and then sliding in (with good hand-holds on both sides of the cabin). Once seated inside it's surprisingly roomy and comfortable since you don't have to share shoulder space with anyone. The "wrap-around" canopy is very sporty and the great visibility surprised both of us. The between-the-legs control stick is well placed and also feels quite sporty and well placed. I liked the throttle lever on the left hand armrest (both front and back seat). While very comfortable, the armrests (both left and right) could easily be narrowed a few inches to increase space for wider pilots and the legroom for the back seat could also be increased for longer legged passengers (something we're already addressing).

Comfortable yet very sporty feel (even when bundled up for the cold): 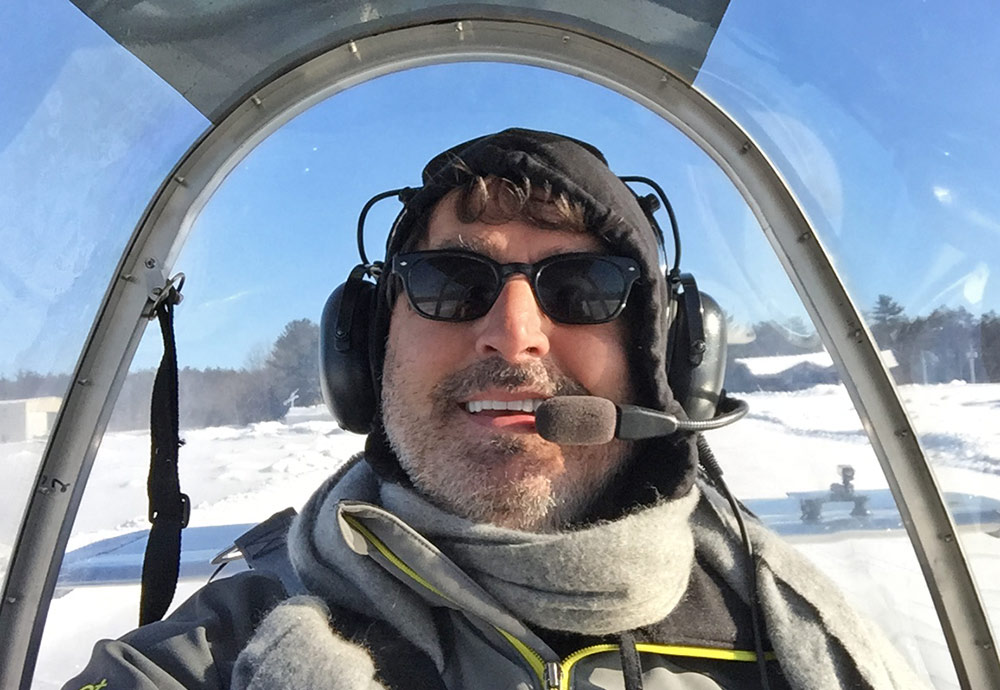 One of the first things I noticed when seated in the airplane was that I was a couple of feet higher above the ground (than what I'm used to), giving the impression I was in a bigger airplane, and giving me excellent visibility over the wings and around the airplane. Start-up procedure with the Rotax is typical and the plane taxis very well. The nosewheel is steerable with a steering dampener (as opposed to direct linkage with Zeniths) and allows for nice tight turns with minimal need for brakes (the effective toe brakes allow for differential braking).

We started the take-off roll with the stick pulled mainly back, lightening the back pressure as nose started to rise, and maintaining a gentle nose-up attitude until gentle lift off at around 60 mph, using about 300-400 feet (gross weight, cold day but snowy runway).  Once airborne we continued with a gentle climb, allowing airspeed to pick up to about 90 mph, climbing at approximately 750 fpm (at 5,500 rpm on the Rotax 912 ULS engine). This is a much flatter climb angle than we're used to in Zeniths, giving us excellent over-the-nose visibility.

Leveling off, we remarked on the good pitch stability (not too sensitive at all) and noticed very little adverse yaw and balanced control forces that are not heavy at all but also quite responsive.  The rudder forces are responsive and quite light in steep turns (compared to Zenith) and we continued to notice the excellent visibility.  Sitting up high above the wing and relatively forward (in the front seat) yields surprisingly great visibility!

In level flight and keeping the engine rpm at 5500 indicated a cruise speed of about 125 mph. Noise level seemed perfectly normal even though the airframe was uninsulated.

Video: Turns with Instruments Overlay:
(Looking at the GPS speeds and compass, the Garmin VIRB data is not always the most accurate)

A slight drop of the nose (about 4 degrees) quickly increased the indicated speed to 150 mph with minimal altitude drop, demonstrating a sleek (relatively low drag) airframe design. It will be interesting to fly this airframe behind more power and perform basic aerobatic maneuvers! We quickly became comfortable flying this airplane and started thoroughly enjoying it (and nearly forgetting the extreme cold!), both remarking how fun and sporty this airplane was: 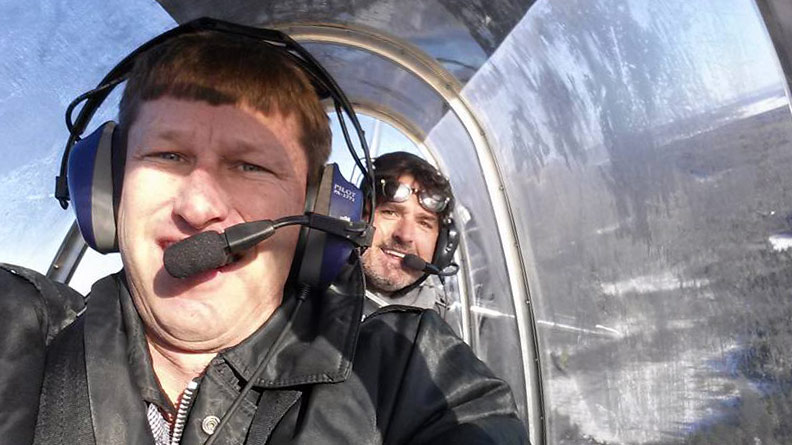 On re-entering the pattern and preparing to land, the downwind checklist is very short and simple since this is a non-complex airplane. Reducing power and keeping the nose up slows the airplane down to about 90 mph...eventually. I say eventually because this plane takes awhile to slow down compared to higher lift/drag Zeniths.  Adding flaps also takes awhile since the electric flap actuator is slower than we're used to, and applying trim (electric elevator trim tab) helps keep the elevator forces light.  With full flaps down we approached at about 70 mph, with good forward visibility and good directional control (we were a little fast since its such a clean airplane...).  Maintaining a slight nose-up attitude over the numbers at the end of the runway and the SAM Aircraft plane lands itself at approx. 55 mph (like most low wing airplanes the aircraft lands itself once it's in ground affect, without the tendency to float too much, even in the very dense cold air). The airplane maintains adequate control at low speeds and is not too sensitive, and demonstrated good cross-wind handling capability.  Once on the ground the brakes are very effective and we noticed again how high we sat above the ground while taxiing. The side-hinged canopy opens easily, and exiting the plane is straight-forward with the ability to push yourself out easily (since the narrower cabin has hand-holds on both sides), and the step forward of the wing makes it an easy step down to the ground.

Video: Flying the SAM Aircraft (on day one):

We both really liked flying this prototype aircraft! It was fun to fly, with good performance and nice handing, and fun even in the back seat. While we've become accustomed to flying Zenith airplanes (and love their features and characteristics) we had a lot of fun with this very unique (to us) design and look forward to flying it more.

I think it has the potential to be a very capable light aircraft, and is unique in many aspects, and will make a welcome new design, not only to the Zenith line-up, but to the light kit industry in general.

The creator of the aircraft, Thierry Zibi, put a lot of thought into this new design, and spent a lot of energy in styling this aircraft with its unique retro/modern look and feel.  We look forward to continuing this development. We're excited about the many different possible configurations with this aircraft: Like many prototype / demo planes, the SAM Aircraft, as configured, is somewhat heavier than foreseen. When put into production we anticipate certain weight savings as we streamline parts and sub-assemblies. Some of the configuration choices and options we're looking at include:

In the following months we'll be deciding on one configuration for re-introducing this airplane, as well as deciding on the different configurations to ultimately offer. Last month we posted the survey form when we announced the acquisition and we've been thoroughly impressed with both the number and quality of survey responses! If you haven't already done so, please complete our short survey to let us know what you think and to be kept up-to-date of ongoing developments.

Earlier this year at the Sebring US Sport Aircraft Expo, Aero-TV interviewed me about the SAM Aircraft acquisition:

I invite you to please share your comments below.

Comment by Chris M. Brammer, Jr. on May 4, 2016 at 12:34pm
Nice looking aircraft. Might be my next project. Keep us informed on modifications and new configurations.

Waiting to get one, Great review & purchase. Hope you can get this to market quick.

A great addition. I look forward to seeing what Zenith has in mind for improvements and weight savings. I too think it reminds me a bit of the beloved T-34.  I can imagine a great US Navy trainer paint scheme on these beautiful lines.

This reminds me of an old aircraft, the name of which I have forgotten . . . seems that it had a Native American name . . .   Any ideas?

As with other commenters here, when Thierry announced the SAM was for sale, I was curious to see who would pick up this excellent aircraft design.  I'm glad it has been purchased by Zenith as this seems like an excellent match between a brilliant new design and a well-proven kit manufacturer.

The SAM will offer a different blend of performance than other aircraft in the current Zenith lineup, being both reasonably fast as well as reasonably nimble, while still offering decent payload capability and tandem seating.

This is a very positive development in the kit plane industry.

Comment by Greg Booker on February 19, 2016 at 12:54pm
The deHavilland Chipmunk lives! I guess it will be called the Chipmunk 2 or CH2?