Following are photos of the two days of the workshop and fly-in (and drive-in) gathering:

Above: Finishing the STOL CH 750 Super Duty rudder assembly in just a few hours on the first day of the rudder workshop.

Below: Checking out a STOL CH 750 Quick Build Kit project being completed as a Wheels and Wings builder assistance project, including a UL350i engine installation: 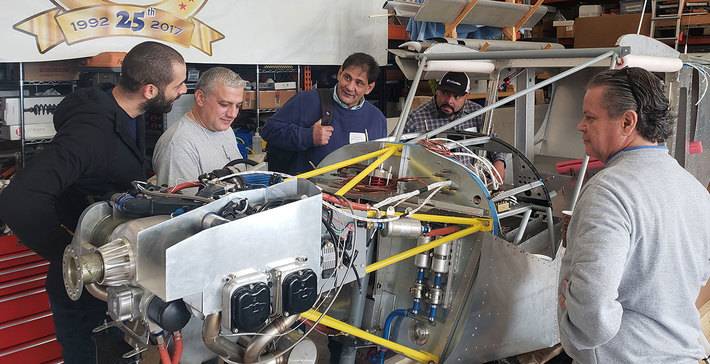 Below: Roger and Herman, along with CH 750 Cruzer builder Ed Clark, look on as Alan Lay works on his CH 750 Cruzer rudder assembly. It was great to have active builders join us at the workshop to help new builders get started on their own projects:

Below: Jon Dickinson and friend work on their Zenith CH 650 rudder assembly while Alan Lay gets help from Ed Clark on his CH 750 Cruzer rudder assembly:

Three Zenith high-wing planes right in front of the Wheels and Wings hangar at Massey Ranch Airpark in Florida:

Jon Humberd flew from central Tennessee in his "Super 701" to the workshop and fly-in. He has a beautifully-built STOL CH 701 with a custom 130-hp UL350iS engine installation, hence the "Super 701" name:

Below: Jon Humberd (in black shirt) socializes with STOL CH 750 builder Justin Tisdale (aka MoosetacheFlyer on YouTube) and workshop participants from southern Mexico:

Jamie Beckett had this to say about the workshop experience: "Skills were being taught, confidence was booming, and physical objects were coming into shape. This is what happens at a rudder building workshop. It is truly inspirational. I’ve been a participant and an observer. It’s absolutely worth the time it takes to attend."

Below is his picture of Tom, a former rusty pilot who's now a current pilot once again and who plans to build himself an airplane: Below: Alissa from Viking Aircraft Engines (also based at the Massey Ranch Airpark) chats with workshop participants Rick Green and Cafer B. from island of Cyprus (in the Mediterranean)

Group photo of the still-smiling workshop participants at the end of the first day. Our hosts Herman and Amy of Wheels and Wings are pictured on the left:

Late afternoon was a busy time for flight demos. Below, Roger takes Gustavo up for a demo flight in a STOL CH 750, powered by a 100-hp Continental O-200 engine:

Edgewater, Florida is, well, nearly on the edge of the water. The Atlantic Coast is just a few miles from the airport:

Gustavo waves down from overhead! Check out those leading-edge wing slats on the STOL CH 750: Below: This STOL CH 750 Super Duty, built by and equipped with a Viking Aircraft Engine, is based at Massey Ranch Airpark. Posing for a the photo with Francisco Simon and friends (from Mexico) and Alissa (and Rudder) from Viking.

Below: After a fun day building and flying, gathering of workshop participants and friends for dinner. What great camaraderie!

Day Two: Completing the rudder assemblies, and the Zenith fly-in gathering (Saturday, January 25, 2020)
Watch the video of the day's activities:

Early the next morning I had a chance to go flying with Jon Humberd in his Super701:

We had a great time flying along the Florida coast, just north of Cape Canaveral. (I'll share videos of the flight later.) Zeniths are perfect airplanes for scenic flights, with side-by-side seating and fantastic visibility!

Work continued on the rudder assemblies as the fly-in (and drive-in) open house activities got underway:

Jon Croke, of HombuiltHelp.com fame, attended to meet with builders and to share kit building tips and hints: 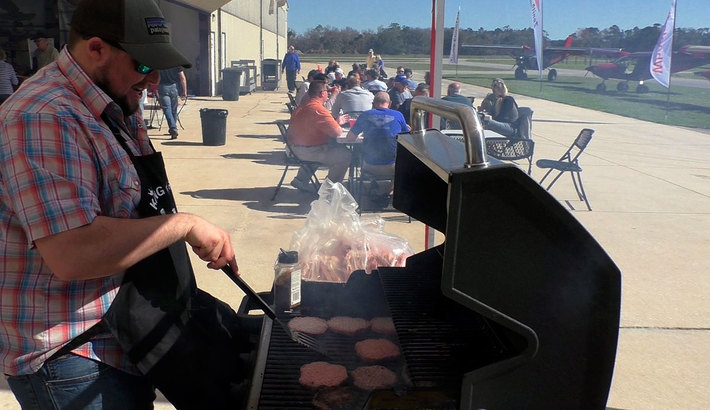 Hamburgers and hot dogs with the aircraft rudders! It doesn't get much better than this! Jon Dickinson and friend with their just-completed Zenith CH 650 rudder assembly: Lunch in front of the hangar. We were blessed with perfect Florida sunshine throughout the day:

Builders check out the systems in the CH 750 Quick Build Kit being completed at the Wheels & Wings facility: Jon Humberd flew many flight demos in his STOL CH 701, as did Jan Eggenfellner in his Viking-powered STOL CH 750 Super Duty:

We had many visitors come by throughout the day, including Jana and Gary Filip, organizers on the DeLand Sport Aviation Showcase (located at the next airport over):

Checking out a Zenith STOL, powered by a Rotax 912 engine: 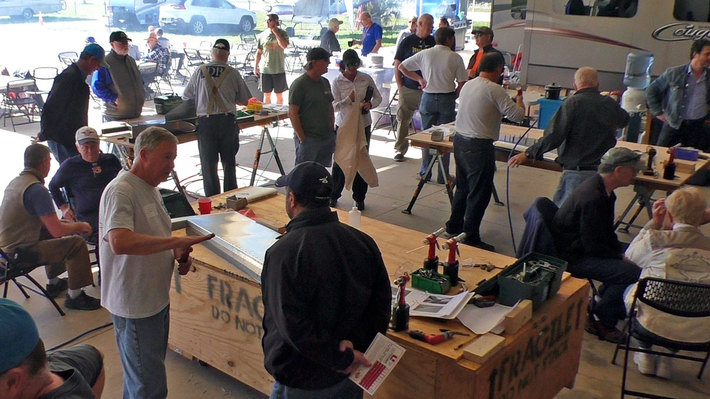 The STOL CH 750 takes off on an afternoon demo flight:

Jon's "Super701" on another flight demo:

The STOL CH 750 Super Duty taxies out for a demo flight:

Viking Aircraft Engines is based in the next row of hangars, and held its second annual workshop the following day. Watch the video of their successful workshop.

The beautiful evening light was the perfect time for a photo shoot with Viking Aircraft Engine's Jan and Alissa:

Thanks again to our great hosts! Herman and Amy (with the help of her family) were wonderful hosts who opened their hangar to us. Be sure to contact them if you have any professional builder assistance needs in completing your Zenith! Thanks also to Jon Humberd for offering demo flights to visitors and participants in your "Super 701".

The view from the local "fish camp" as the sun sets: two dolphins swimming by.

Enjoyed my ride with Jon in his super 701 ! Tom Hankamp 701 under construction

Great Write up Sebastien, it was a wonderful weekend.