Even though it was "his trip", Les let me plan the route from Santa Rosa, CA to Boise, ID.  I chose a little low-level desert flying in Nevada from Carson City (CXP) to Battle Mountain (BAM). Then we flew the entire course of the Owyhee River (about 380 miles) from just north of Battle Mountain to where it flows into the Snake River in South-Western Idaho.

Mrs. Goldner wisely skipped this part of the adventure.  She flew commercial into Boise (BOI). Les picked her up there then we flew to a grass airstrip with camping located in Garden Valley (U88).  This strip is at 3,100 feet.  We spend two nights at Garden Valley then we went our separate ways.  Les and his wife had reservations at several back-country lodges.  I did not.  Also, I only had one week for my adventure; they had two.

I flew from Garden Valley up into the Sawtooth Valley and landed at a grass strip at Smiley Creek (U87).  This strip is at 7,100 feet.  There is camping with hot showers etc.  You can walk to the lodge for food if you get tired of your own cooking.

The headwaters of the Salmon River are located a few miles south of Smiley Creek airstrip.  The “baby” Salmon River (looks like a creek) runs through the campground.  I decided to fly the river all the way to Johnson Creek (3U2), which is off the South fork of the Salmon River.  Along the way I flew up the middle fork of the Salmon and also into one of its tributaries, Big Creek.  I also flew up to Cold Meadows (U81 – 7,000 feet) to take a look.  I did not land there.  The trip from Smiley Creek to Johnson Creek was 405 miles the way I chose to go.  As the crow would fly, it is 80 miles.

It is said you should not fly in the Idaho Mountains after 11:00 am to avoid possible extreme turbulence. Flying in the canyons “for no good reason” is also not recommended.  I got into Johnson Creek about 2:30 pm and yes, flying in the canyons in the afternoon can be exciting; 21 knot winds one way followed by 14 knot winds the other.  Climbing 700 ft/minute sometimes, descending 700 ft/minute at other times, looking for lift, not always finding it were you would expect it.  This was not my first rodeo in the mountains.  The Zodiac and I held up OK.  Still, I can’t recommend afternoon canyon flying.  Enjoy this fool’s pictures.  Don’t be one yourself.

Speaking of fools… I landed a Johnson Creek a few hours too late to observe the excitement of the day; a Piper 150 which ended its flight from California in the trees.  According to the accounts offered to me as I walked the field, the pilot of this plane made a "few" mistakes.  Collectively, they just did not work out for him.

The poor fellow must have been frightened out of his mind to make all these mistakes all at the same time. He and his two friends walked away OK. The plane’s flying days are over (two pictures of the plane are in the slide show).  Something like this happens at least once per year at Johnson Creek, according to the locals.  Don't make this strip your first mountain landing.  If you don't like Garden Valley, forget about Johnson Creek.

I spent two nights at Johnson Creek then flew home – mostly direct.  I stopped for fuel at Cascade (U70).  I stopped to water a bush at Rome State (REO).  The bush was thankful – it’s that dry there.

All around, a good adventure except it was too hot – into the 90s each day even at 7,100 feet at Smiley Creek.  Probably July and August are not the best times to visit.

Another challenge was the forest fires. In Idaho they were ominous looking but did not happen to block my path or my view. On the way home to California however, I ran into a wall of smoke hundreds of miles long.  I was able to climb above it at 15,000 ft.  But still, my handy little portable CO meter read 32ppm at one point and ranged from 6 to 16 for about two hours. Unpleasant to say the least!

I took many hundreds of pictures along the way, as I often do.  When I got home I cleaned up the collection and got it down to about 400 pictures worth keeping.  Instead of picking out a few to post, I decided to make a few slide shows out of all of them.  The slide shows were then turned into movies so I could upload them.  Links to the "videos" are below.

Here is an overview of my GPS track, Starting and ending in Santa Rosa, CA. 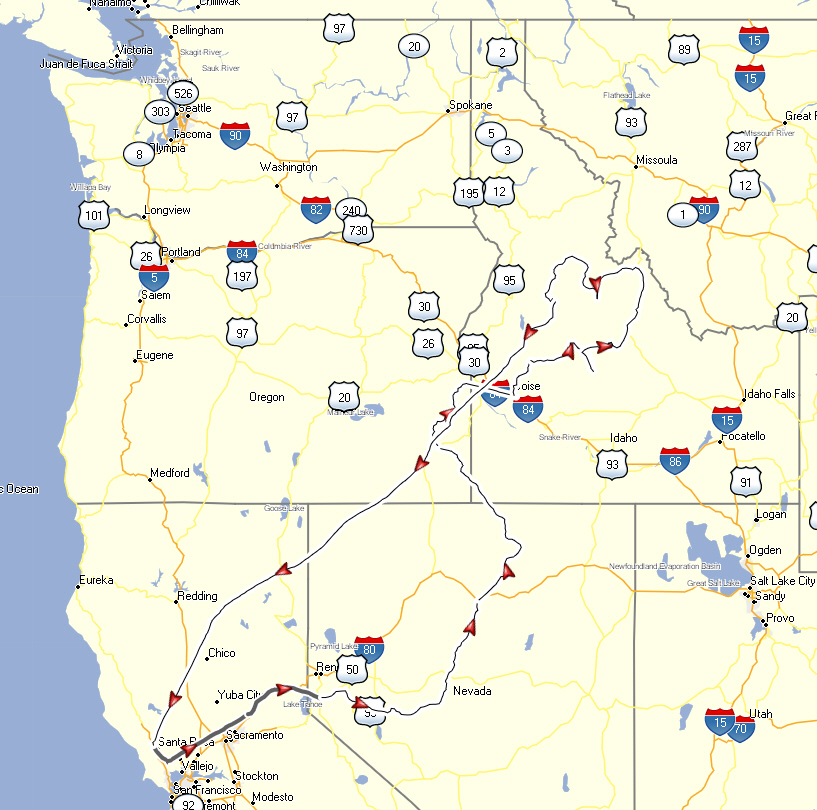 Below are 7 links to 7 video slideshows. These videos were produced and uploaded in HD (high definition). They are best watched full-screen. The default playback in your browser is not necessarily in high definition; you may need to click the gear icon in the video player to switch to HD each time a video starts.

The second video slideshow documents about 3 hours and 300 miles of desert flying. Click here to watch.

The third video slideshow contains pictures taken as we traveled north-east of Battle Mountain on our way to the Owyhee River headlands.  The video includes pictures of a monstrous open pit mining operation. Click here to watch.

The forth slideshow is of the 380 miles flown along the Owyhee River.  Click here to watch.

The filth slideshow shows the grass strip at Garden Valley, the flight to Smiley Creek and my time on the ground at Smiley Creek.  Click here to watch.

Slideshow 6: These pictures were taken on the 405 mile flight from Smiley creek to Johnson Creek along the Salmon River.  This includes a side trip up the middle fork and Big Creek. Click here to watch.

Slideshow 7: These pictures were taken on the 631 mile flight from Johnson Creek to Santa Rosa.  There were several fires burning in northern California which made for lots of smoke in the later pictures of the flight. Click here to watch.

Super photos,  thanks for sharing with us...Tom

Steve, as usual you did an excellent job of portraying Oregon, Idaho and those other unmentioned states from the "high desert" to "mountainous" beauty!

The Owyhee River presents some beautiful country and it is especially fun to float in the spring time. Very challenging at places, other rapids have to be ported. Interesting geology throughout this country - especially the lava flow.

Now, you know why the Salmon River is called the "River-of-no-Return". Lewis and Clark couldn't navigate it from the proximate location of the city of Salmon to Johnson Creek area, but you did it in short order with some beautiful pictures of rugged country to prove it.

I hope that some of your viewers take time and look closely at your pictures for some of the back-country strips that parallel the river - deep in these canyons. They are very difficult for landings/takeoffs, but most are doable with any Zenith - only after instruction with a knowledgeable instructor.

These people can be found at Salmon, Challis, Cascade, McCall airports at reasonable rate$.

Many examples (such as the one you showed) of crumpled aircraft are left at airstrips by uninformed pilots on a regular basis - some don't walk-away!This is why I'm constantly preaching checkouts - the best safety procedure available!

For those who wish to visit Idaho's back-country strips, First, I highly recommend purchasing "Fly Idaho" by Galen L. Hanselman. This publication is advisory only, but recommends procedures for landings/takeoffs for most of Idaho's back-country strips with layouts and color photos showing the sight picture on final for landing, etc... Then, if you like what you see, hire an instructor to check you out at the strips you wish to land on.

Stephen, Neat pictures and a great trip. I am from New Mexico, I have family in Santa Rosa. Will be in Santa

Rosa on Saturday the 25th of august. where do you fly out of? I am building a 701. Jerry Griego/dusty418@msn.com

Comment by Ron Lendon on August 15, 2012 at 11:48pm
Thanks for publishing your trip. You sure have some great scenery out there. Hope to fly mine out there one of thes days.

Comment by Tim Smart on August 12, 2012 at 3:58pm
Thank you for your post and the slide shows, I really enjoyed them!

You allow--- your reality--- to become our dreams, and it makes it easier, working on our Zenair Projects by viewing your flights.

Nice photos Stephen thanks for sharing them !

Comment by Tim Garrett on August 8, 2012 at 6:24pm
As always, I really enjoyed reading about and seeing your epic trips!

Comment by Stephen R. Smith on August 8, 2012 at 5:20pm
Hello Roger, I think of safety often but I don’t let a quest for absolute safety control my flight planning or flying. I may well die in my airplane – I can think of worse fates.

On this trip I had my camping gear along. I was not carrying a gun, something I have been pondering. I have basic tools for airplane repair including a spare mag, distributor cap and rotor. I also carry a small first aid kit.

I recently upgraded my ELT to a 406 MHz version.

I rarely talk to ATC, or ask for flight-following. However I do have a home-spun real-time tracking system in my airplane. When my tracking system is working, my family knows exactly where I am and where I intend to go. They can see the active route or current GO-TO in my GPS. I can send a distress email from the airplane with two clicks of the mouse.

Very nice photos of some pretty rugged terrain. What survival gear did you take with you?