In a letter dated June 24, 2011, Terry Allen, manager of the FAA Production and Airworthiness Division, stated that the Evaluation Team determined that the kit will “allow an amateur builder to meet the major portion requirement of Title 14, Code of Federal Regulations part 21, Certification Procedures for Products and Parts, § 21.191(g),” known as the "51-percent" requirement to register the aircraft as Amateur-Built - Experimental.

The FAA Production and Airworthiness Division ( AIR-200) will have the Zenith kit added to the List of Amateur-Built Aircraft Kits located on the FAA website.

Amateur builders of the CH 650 kit can use the resulting FAA checklists to determine exactly how much commercial / professional builder assistance may be used in the construction of their projects without violating the "51-percent" requirement. We hosted the FAA's National Kit Evaluation Team (NKET) for two days this week, allowing the team to evaluate and determine that the CH 650 B kit, as produced by Zenith Aircraft Company, meets the intent of the "51% rule" and to allow an amateur-builder to register the plane as an "amateur-built - Experimental" aircraft (meeting the "major portion" requirement of Title 14, Code of Federal Regulations part 21, Certification Procedures for Products and Parts, § 21.191(g). Below, the five members of the NKET next to the CH 650, ready to start:

The evaluation is a rather slow process, with an evaluation of each item and component supplied in the kit, using a checklist to determine the level of fabrication and assembly performed by the part manufacturer (Zenith) and the fabrication and assembly required of the amateur builder in building the kit.  Since this was the second visit by the FAA NKET to Zenith (last year the team evaluated the STOL CH 750 kit), we knew what to expect and most kit parts (and their level of completion) are the same or similar for the CH 650 and CH 750.  See my blog post of the FAA visit from last year for photos and information on the STOL CH 750 kit evaluation.

The FAA's Amateur-Built Aircraft National Kit Evaluation Team was established several years ago (see Order 8130.35) to implement a standard methodology of evaluating amateur-built aircraft kits across the country, so that kits are evaluated with one national standard.  A new checklist was developed to determine the required percentage for fabrication and assembly of a kit within the following categories:  Kit Manufacturer (ie. Zenith), Commerical Assistance (optional), Amateur Builder Assembly, and Amateur Builder Fabrication.

We spread the entire CH 650 airframe kit on the factory floor to show all the different parts and components included in the kit. 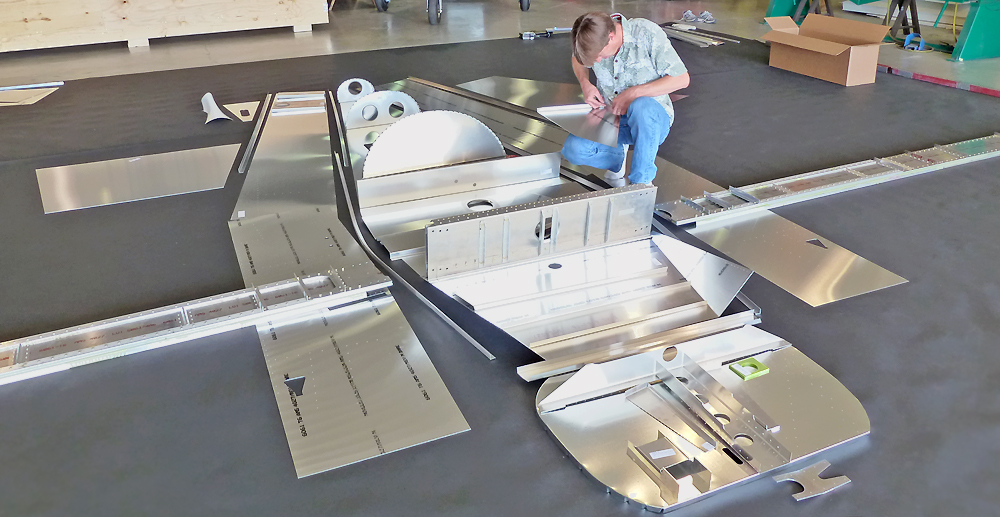 As expected, it will be several more weeks before the FAA issues its official determination (checklist with a "score") and the CH 650 kit is added to the official "Revised Listing of Amateur-Built Aircraft Kits."  One of the advantages of the new checklist is the ability it gives to amateur builders to determine exactly how much commercial / professional builder assistance may be used without violating the “major portion” requirement.  Zenith can also use the resulting FAA checklist to help it decide how much additional pre-fabrication it can perform to the kits.

The CH 650 B kit makes extensive use of pilot holes (CNC pre-drilled skins and parts). While this feature saves the builder countless construction and assembly hours, it still fully meets the "fabrication" requirement since the builder needs to line up parts, drill through the pilot holes (to final hole size) and then de-burr prior to riveting the assembly together.  Sub-assemblies, such as the upgraded wing spars, are supplied factory assembled and buck-riveted together. We used the occasion of the FAA NKET evaluation to lay out the entire CH 650 kit on the factory floor for this unique photo opportunity.  We rarely get to see all the airframe kit parts spread out like this. In the background is the kit crate used to ship out the entire kit, and the finished CH 650 assembly.

We also used the opportunity of the FAA NKET visit to update the FAA's evaluation of the STOL CH 750 kit, which was updated last summer with the 2nd edition (gross weight increase).  Below is the photo from last year showing the STOL CH 750 kit:

Here's a brief video clip of the FAA kit evaluation:

Congratulations to you and all of the Zenith Team!

Part of this year's BIG celebration can be the 650B and 601XLB acceptance by both the builder community and the FAA.

Comment by Rebecca Anne Shipman on June 29, 2011 at 12:34pm
Nice to know - I'll look forward to having the checklist.  It will make documentation easier.

Comment by Joris Haentjens on June 6, 2011 at 6:53am
Can the CH650 be built as an advanced ultra light in Canada? It is not in the Canadian list