This event is the largest annual ultralight gathering of the year in France. With well over 100 exhibitors and close to one thousand ultralights in attendance, it is one of Europe's finest. Great weather helped make this year's show another great success; Zenairs were flown in from as far away as the UK, Austria and Italy. Zenair's exhibit included a number of kit-built as well as dealer-assembled ultralights, including a CH 601 XL, a CH 650E, and a number of STOL CH 701. In addition, we had the newly completed 200HP four-seat CH 640 offered by Barge Aircraft. 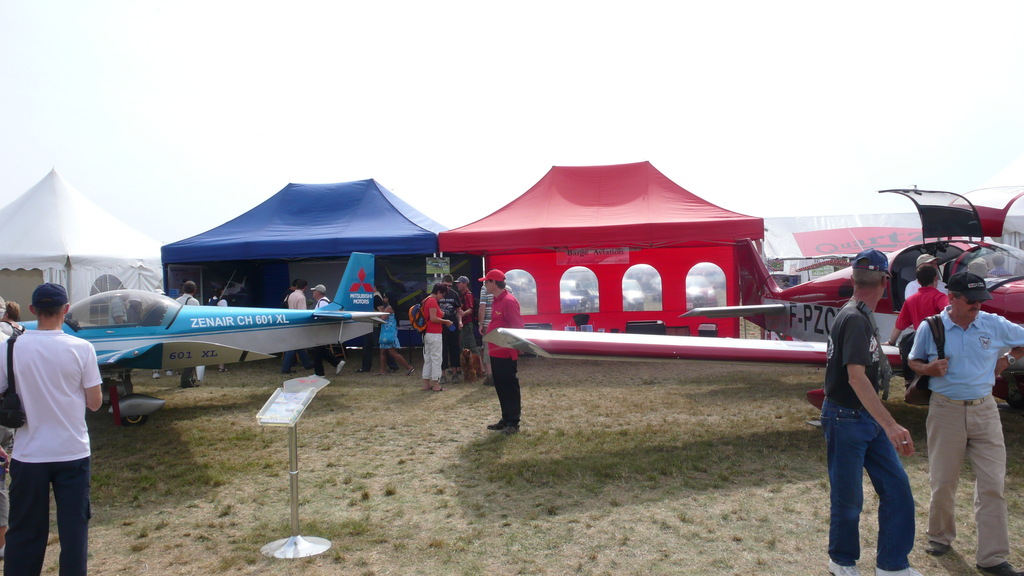 As the price of modern, high-performance ultralights continues to climb, the four-seat CH 640 is a remarkably affordable alternative for pilots in search of a sturdy, comfortable and roomy cross-country plane. On the other hand, we had many ULM pilots (choosing to forgo the PPL) re-discovering the original STOL CH 701... 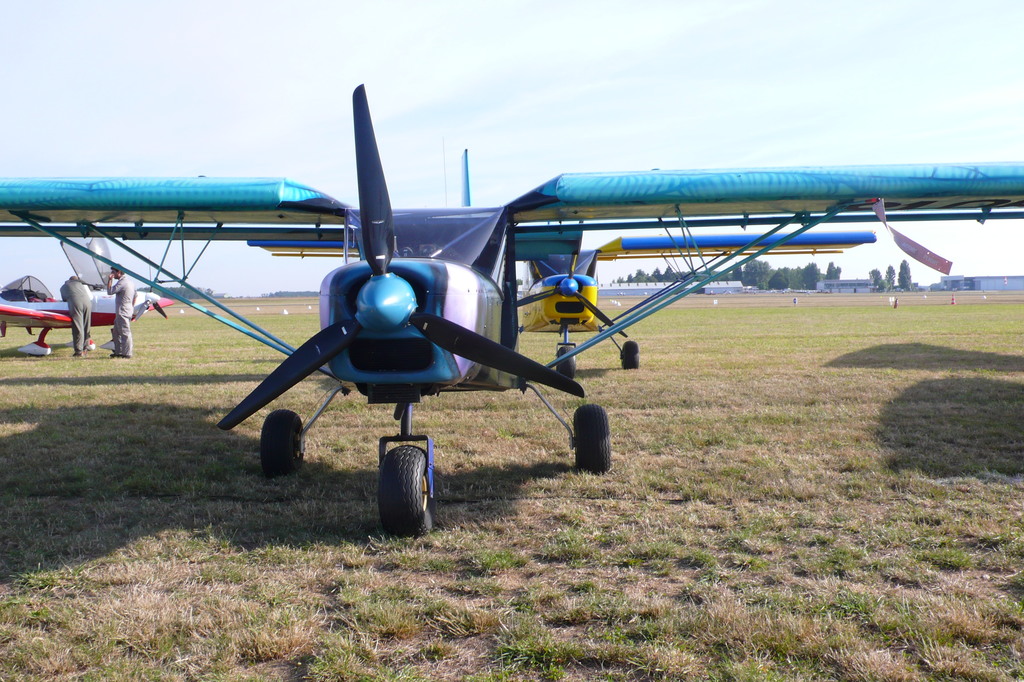 A flight of two Zodiacs - including this beautiful white and blue XL (below) - flew close to 2000 km to attend, crossing the Alps at over 10,000 ft. Lead by co-owners of The Flyboys (Zenair representatives from Northern Italy), they arrived after having just graduated a new pilot from their Zodiac-equipped flight school in record time (15 days from first lesson to license). The Flyboys plan to open a second flight school just outside Venice before the end of the year... 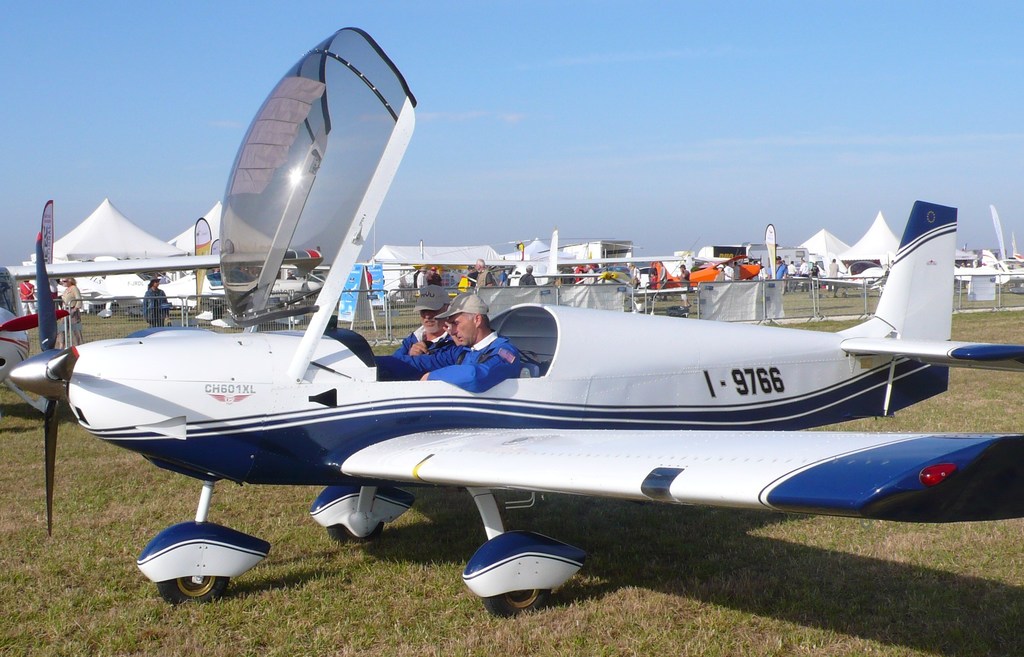 Viktor Strausak and his wife have been criss-crossing Europe all summer, from their home base in Switzerland. Their impeccable CH 601 HDS (below) made it to Blois as well, and could be found in the aircraft/camping area. Many took the long walk out there not to look at Viktor's tent, but at the many VGs he has placed all over his airframe. We saw VGs on many more Zenairs at this show (i.e. look closely at the Italian XL above...) 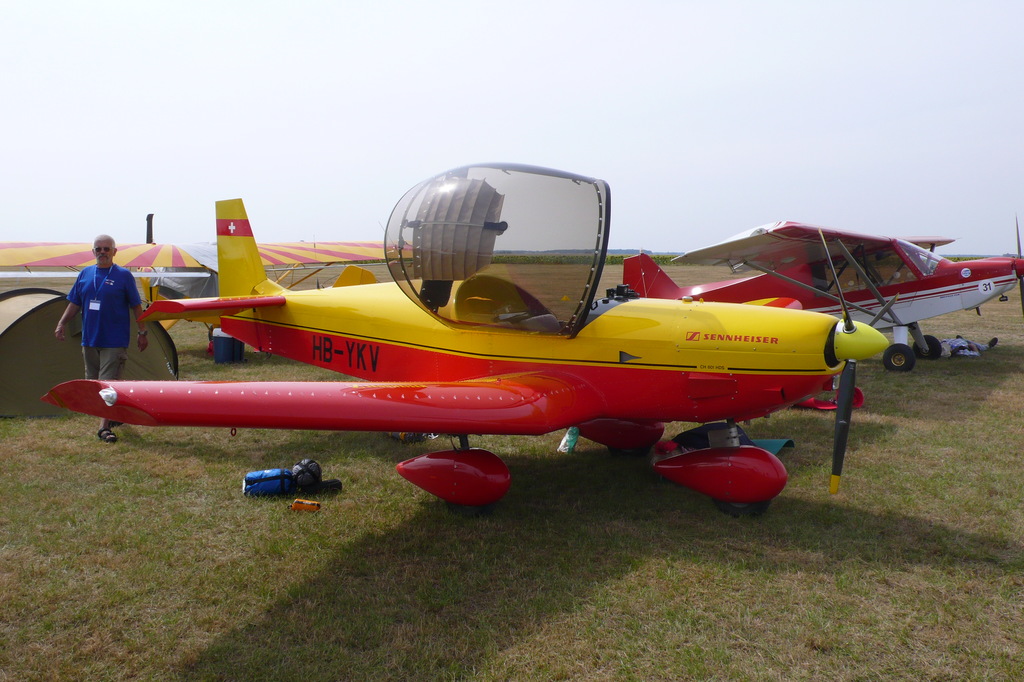 This is Johann Schmoelzer's very fine Zodiac XL (below). Johann flew in to Blois from Austria. Like Viktor, he flies his Zenair all over Europe, taking fabulous pictures along the way and posting many on his website (click here). A number of his exceptional videos are being sent to Zenair News for inclusion in upcoming issues of the companion DVD. Close observers will note that Johann has more fuel tanks than usual for an XL. He is planning a round-the-world trip in his Zodiac, probably for 2011... Wow! Keep us posted Johann! 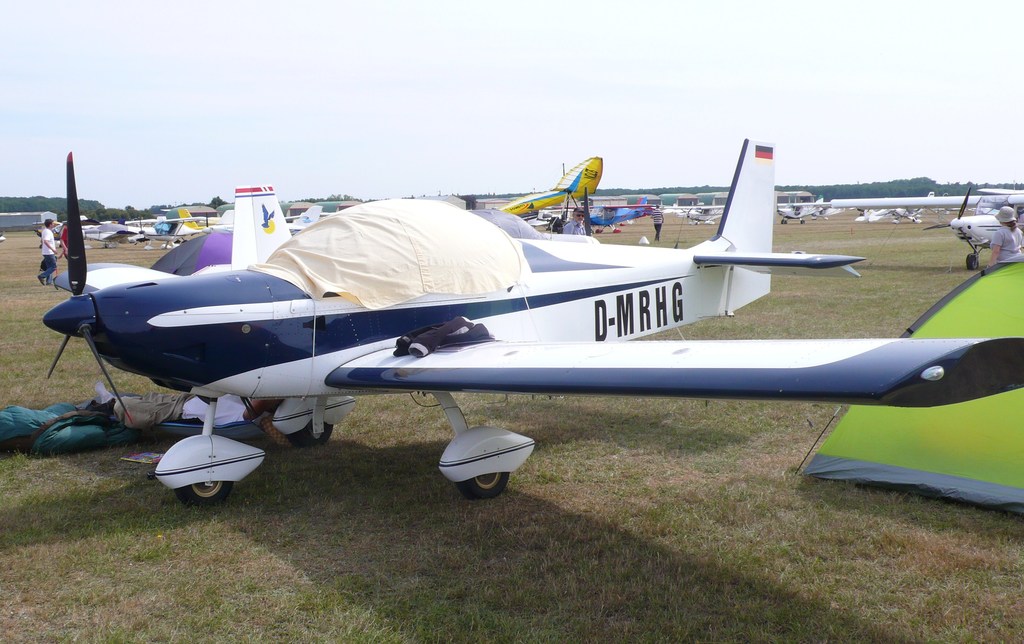 Every one of the planes we saw seemed to have an interesting story to tell, but with over forty Zenairs spotted on the field on the first day of the show, there's only room here for a quick picture of each. Apologies to the owners whose aircraft we missed. Thank you all for continuing to fly them far and wide - and safely. 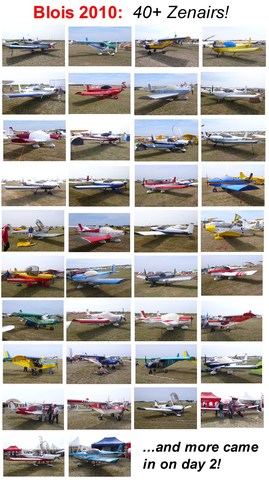 On Saturday night, we had a nice Zenair owner/pilot get-together around a pig-roast prepared by Barge Aircraft. The atmosphere was pleasant and relaxed; everyone present enjoyed a viewing of "Canyon Surfing", still the best video available to show-off the remarkable handling characteristics and performances of the STOL CH 701. Comment by Michael Heintz on September 13, 2010 at 4:36am
Yes, there are a lot of Zenairs in Europe. You can get a sense of this by looking through the new galleries at zenairulm.com. A large turnout of ZAC kitplanes at Oshkosh would be great! MH

Thanks for the report. It would seem the brand is strong in Europe. Perhaps here in the states we can get a big group to fly into Oshkosh in 2011.