At first, I thought we would fly commercial to a navy base and board a docked carrier.  Not so.  We flew to Norfolk and boarded a C-2A Greyhound, called a COD for Carrier Onboard Delivery.  The Greyhound is a twin turboprop with a rear loading ramp.  As we walked up the ramp, I saw that the pairs of seats, on both sides of a central aisle, were facing aft.  There was one window, about 8 inches diameter, on each side near the rear of the airplane – not good if you are claustrophobic.   Before boarding the C-2A, we were given safety instructions, a life jacket (called a horse collar), ear plugs, ear protectors, helmet, and goggles.  No loose items were to be hand carried, as they could become projectiles when landing on the carrier (known as a “trap”).  The pair of shoulder harnesses and lap belt were to be secured at all times, all the rest must be worn for takeoff and landing.  As I strapped in, the thought of taking off on my first solo flight came rushing back ---- “What have I gotten myself into!”.  Two young navy attendants were onboard to assist us.  The land based takeoff from Norfolk was just like any other.  Cruising about 250 knots, we covered the 500 miles to the Aircraft Carrier Dwight D. Eisenhower (CVN 69) in about two hours.  The “Ike”, as it is affectionately known, was about 200 miles east of Jacksonville, FL.  When our attendants stood up, raised their arms with a circling motion and said “HERE WE GO, HERE WE GO”, we knew to prepare for landing.  Being a bit anxious, the “trap” for me was just fine, especially with the seats facing aft.  Photo1. Photo 1, our Greyhound about to trap

We were greeted on the deck by an officer with lots of experience, just look the patches on his sleeve.  Photo 2.  Although we always had an escort, we got to see much of the ship from the bridge to the galley, but not the engine room.  Once below the flight deck, it was hard to keep oriented, even with the deck number and local position being painted on the walls ---- a code I never did quite figure out. 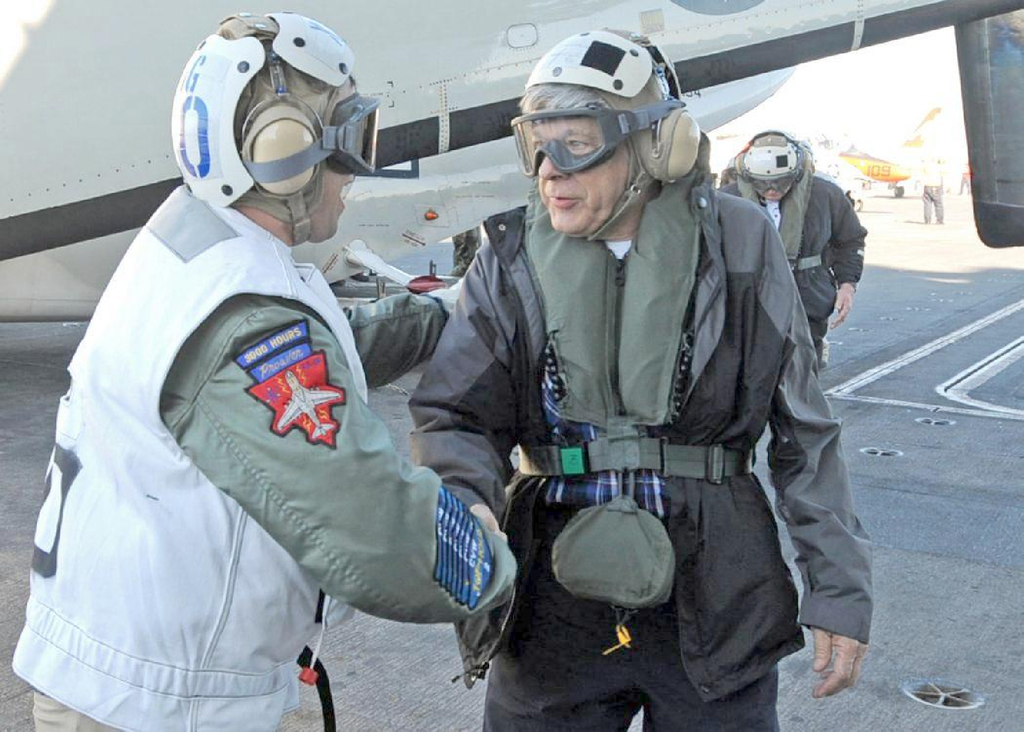 After a quick snack (the navy has lots of good food), we were issued a white jersey, to be worn on the outside of our clothes plus a white helmet, white horse collar, ear protectors, and goggles.  All of these are required before stepping onto the flight deck.  On the flight deck, colored jerseys and helmets (which can be different than the jersey) signify the task of the person wearing it.  White is for observers, a yellow jersey and yellow helmet is for aircraft handling officers while a yellow jersey and green helmet is for catapult and arresting gear officers, the latter are called “Shooters”.  All green is for catapult and arresting gear crews, red for ordnance and crash and salvage crews, purple for aviation fuelers, and so forth.

Our first venture was to observe catapult operations. The Greyhound can fold its wings like other carrier aircraft including helicopters.  Photo 3.  The pressure in the steam catapult is set for the weight and performance of the aircraft to be launched.  Some green jerseys, in the launch area, have a station in the deck to set the catapult values.  The flight deck is very noisy, essentially impossible for conversation.  Some of the deck crew do have radios.  Almost all of the communication among the deck crew and to the pilots is via very distinct hand and body signals.  One green jersey task is to direct the nose wheel tow bar into the catapult’s shuttle.  The “holdback” bar on the aft of the nose gear will hold the aircraft in place until the catapult is released.  Photo 4. Observers on all sides monitor the aircraft preflight checks assuring it is ready to be launched. The Shooter reads their hand signals for a “go for launch”, then signals the pilot to go to full throttle.  Checking the observers one more time, and getting a salute from the pilot, he points forward and goes down on one knee to initiate the launch.  Photos 5 and 6. 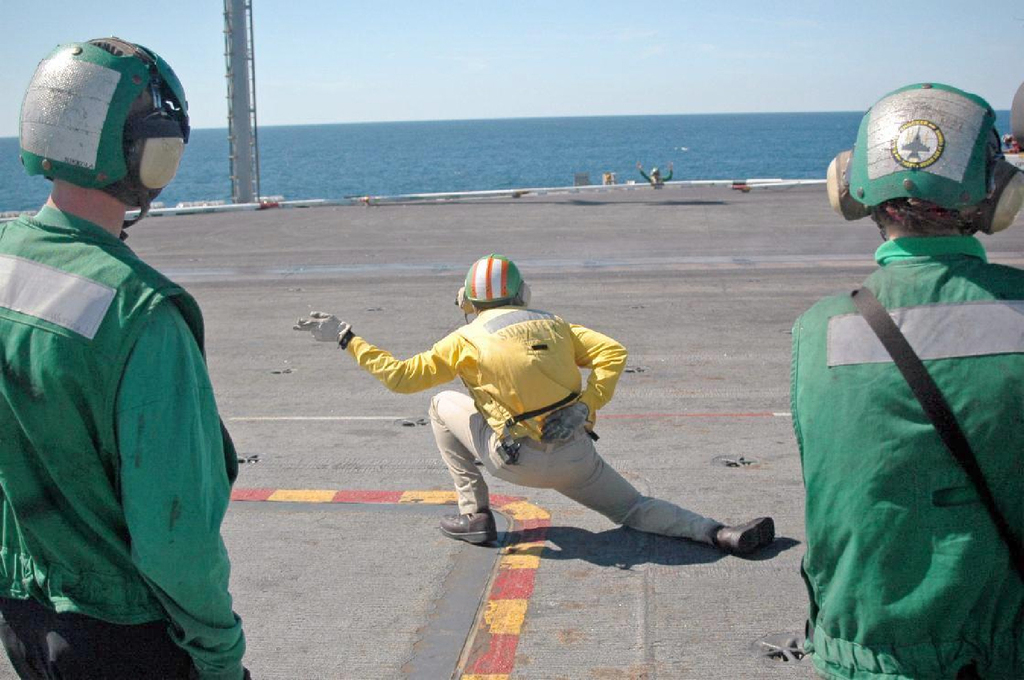 Photo 6, note observer on opposite side

The steam pressure is released to the launch cylinders which overwhelms the holdback and away she goes. On the Greyhound, a pin is sheared at release.  Holdbacks for other aircraft may just release, some are even built into the nose gear.  The Greyhound can weigh over 50,000 pounds but gets airborne easily.  Photo 7. 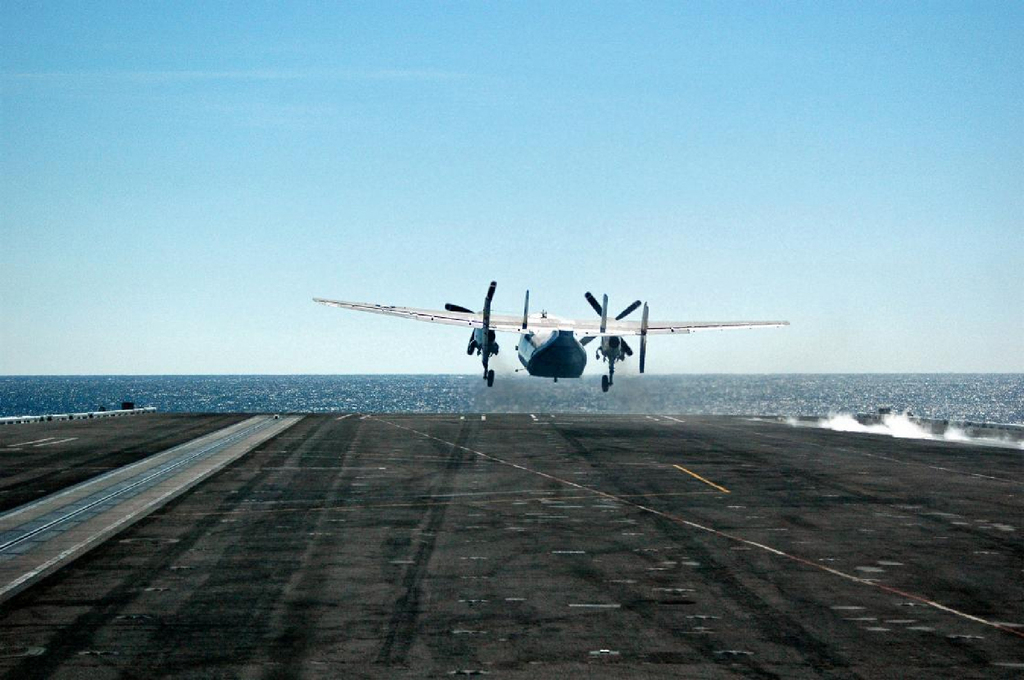 Photo 7, Greyhound is on its way

Helicopters and rescue squads are always on duty during flight operations.  Photo 8. 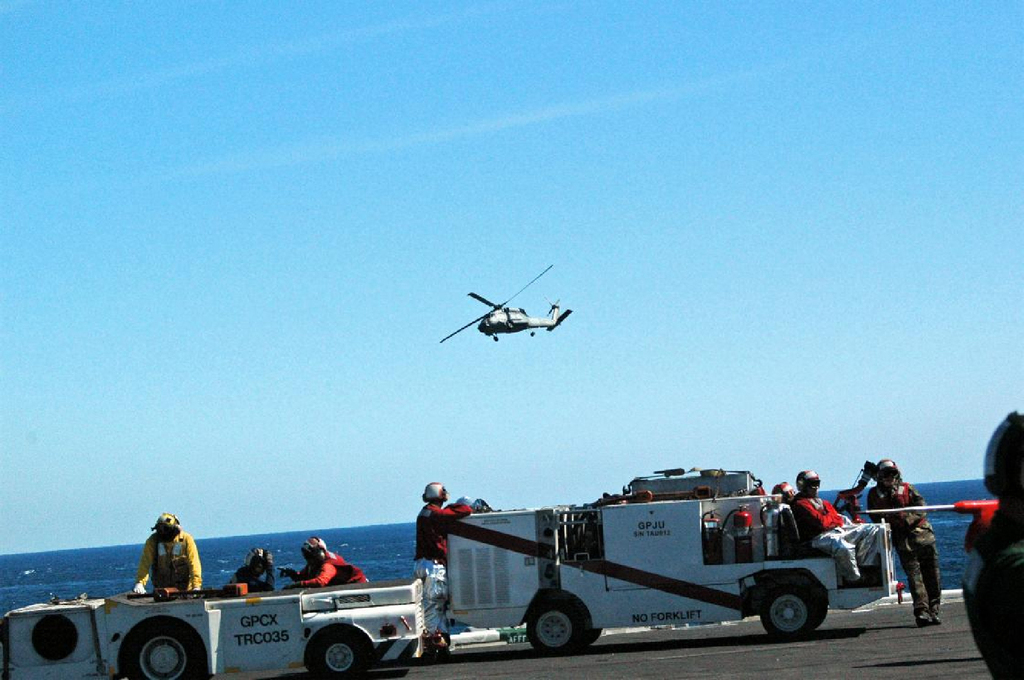 Normally, the ship’s crew numbers about 3000, plus an air wing of 2500 and the fleet admiral with his staff.  While we were there, there was just the ship’s crew and student pilots making their first carrier landings to qualify for carrier duty.  It was interesting to see how young the crew is and how many of the fairer sex (enlisted and officers) are engaged in the operation of the carrier.  For example, a young lady, age nineteen, was at the helm during the flight operations.  At 12 knots and steering slightly away from the wind, she kept the relative wind straight down the canted landing deck.

The main purpose for our visit was to observe landings and launches of the T-45 Goshawk.  Student pilots from Meridian NAS and Kingsville NAS were flying solo in the Goshawk trainer.  To get a sense of the landing environment, the first approach by each pilot was a touch and go with the tail hook up.  Photo 9.  Several “bolters”, missed traps, were noted, but to qualify, several successful traps and catapults are required. Photo 9, nose wheel tow bar and tail hook are up for touch and go

Full throttle is applied at touchdown to make sure the aircraft will have adequate thrust to fly in the event of a bolter.  Steel bows raise the arresting cable a couple of inches to assure the tail hook will engage.  After the aircraft comes to a stop, the throttle is set to idle and the cable is retracted a bit to jerk the aircraft backwards where the hook disengages and can be raised.  The cable is then completely retracted for the next trap and the aircraft taxis away for refueling or tie down.  All of this takes but a few moments.  Photos 10 and 11. 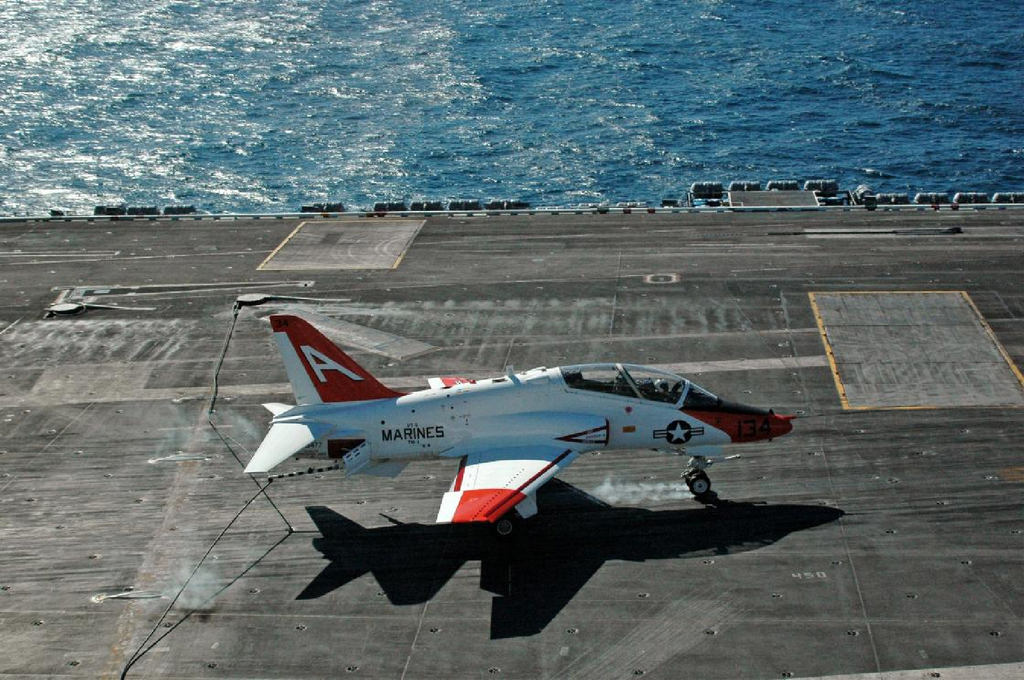 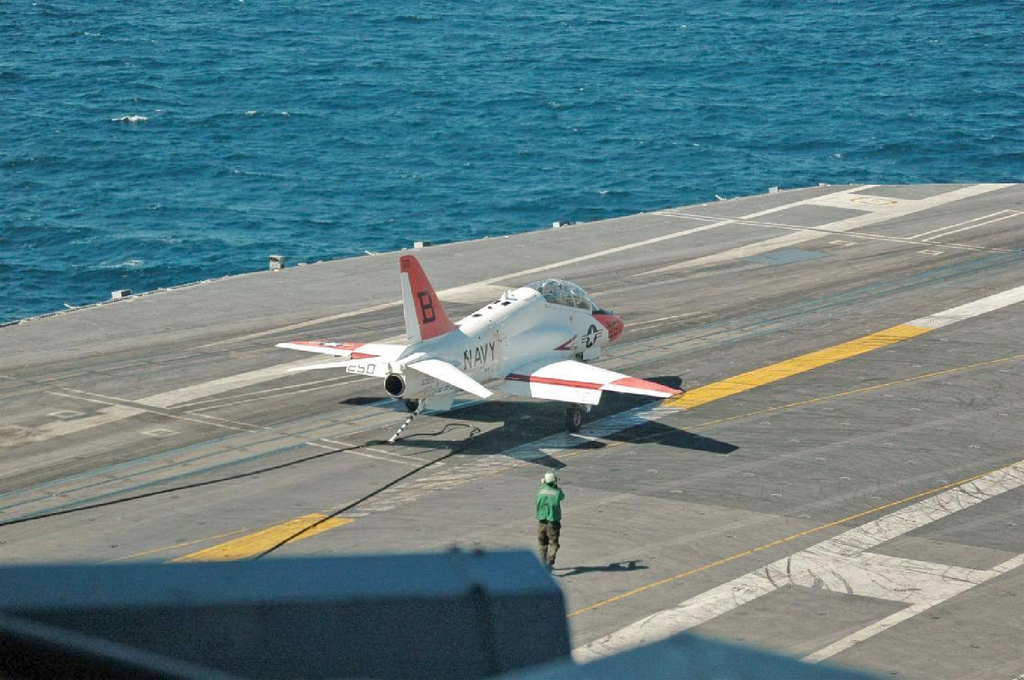 Photos 12 and 13 show a T45 engaging the catapult shuttle and subsequent launch. In every military installation the dining areas have a small table with an empty chair dedicated to POW’s and MIA’s.  Each item on the table has a symbolic meaning which shows the absence and hardship of their comrades.  Photo 14. After a good night’s rest and a hardy breakfast in the Chief’s Mess, known as the “goat locker”, we witnessed a general quarters exercise. A simulated fire (smoke and all) of an F18 mockup on the hanger deck was the center of the general quarters.  Every sailor is trained to fight a fire, but then there are those whose specialty is to fight fires, high temperature silver suits and all.  As the crew progressed through the simulation, the coordination and professionalism were outstanding.

About noon, we met with the captain and senior officers for a final farewell.  We then put on our horse collar, helmet, ear protection, and goggles and were escorted to our C-2A.  Again, thoughts of my first solo came back.  Strapping in we were told to cross our arms, hang onto our shoulder harness with each hand and to put our shins against the seat in front of us.  This was to keep our arms and legs from flailing and smashing into the seat ahead as we were catapulted eye balls out.  With the “HERE WE GO, HERE WE GO”, I held on tight and after a few G’s for a couple of seconds, it felt like we were floating as we cleared the end of the flight deck and the Greyhound settled a bit.  The landing at Norfolk was smooth and signaled the end of A Most Excellent Adventure.  Many thanks to the US Navy and the CVN 69 crew.

Outstanding!  You guys were my heroes from long ago.  I grew up dreaming about what you guys did.

Yes, it is.  He was a Flight Director and I was a Retrofire Officer for the Apollo missions.

Almost totally off topic, but is that Gene Kranz of NASA fame?

Comment by Ron Lendon on September 5, 2012 at 11:28pm
Thanks for posting this, I was telling the guys at work about it.

Great photos and a super excellent adventure,  thanks for sharing with us...Tom

Wow! Thanks for sharing!

I am jealous. I flew in the Air Force and always made jokes about crazy people trying to land an airplane on a boat, but I respect that whole operation greatly. You indeed had an excellent adventure. Wish I could have tagged along.