Yesterday morning (Monday), Lon Boehme, his brother Val and his son Barry pulled in at the Zenair factory in Midland with their 12 ft. trailer in tow. They had just spent the weekend driving in from Alberta (34 hours!) for a promising week: a Wing-building program, a rudder workshop, and a trip home six days later with a partially assembled STOL CH 750 airframe kit in the back! Here is a short running summary of the experience...

DAY #1:  The -18˚C temperatures did not hamper a swift beginning. Matt Heintz started the week with a presentation on building tolerances: General standards to respect while assembling any Zenair design (these are further described in the “Construction Standards” booklet which accompanies every Zenith Aircraft kit).  Nick followed with an inventory check and a familiarization tour of parts and tools.

The first brackets were made in short order as nose ribs were equipped with the slat supports that will eventually hold the full-span leading-edge slats. The ribs for both wings were prepared, in anticipation of working on wing number two before the end of the week.

By Monday afternoon, the first wing skeleton was taking shape as the pre-drilled parts were lined up and clecoed together. 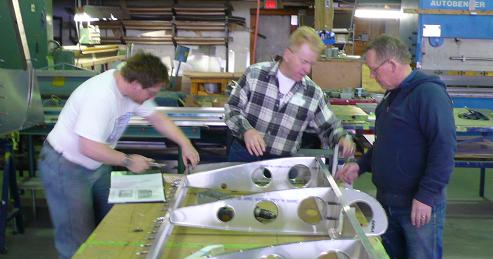 On Tuesday morning, installing the doubler on the rear spar was next, followed by the standard main spar extension.

Next came the bottom wing skins and nose skin. “L” angle stiffeners were cut to size and easily positioned using the pre-drilled skins. Pilot holes in the skins eliminate the need for much measuring and make for quick and easy drilling.

With the trailing edge installed, the wing was flipped over on Tuesday afternoon and the flaperon brackets were installed.  These CNC-cut parts are pre-drilled and ready to cleco in place after the protective paper is removed from the parts.

Soon thereafter, the top skin was positioned and straps were used to pull the nose skin in place. Using the factory-drilled pilot holes makes joining the various parts straight-forward and easy; we cleco everything together first before dismantling again to deburr and apply zinc chromate (optional). 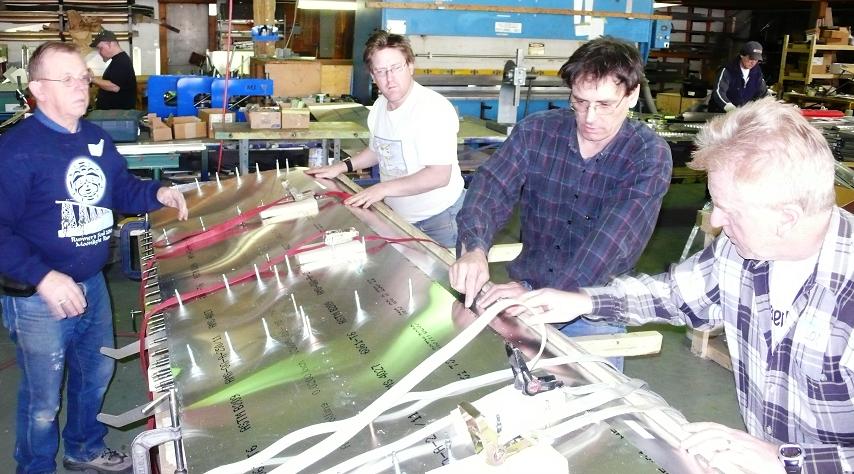 Straps hold everything in place while pilot holes are lined up. Opening-up all the holes to full size (#30 drill bit for A4 rivets) is a simple process with an air drill, leaving very few burrs to remove before riveting can begin.

Following the drawings and the step-by-step photo assembly guide makes for a straight-forward kit assembly experience. As day two comes to an end, homework for the hotel room is to read-up on tomorrow's work...

We're soon going to have a CH750 airforce in this part of the country. Would love to come and see your kit.