I have worked with composites for decades so none of this was particularly new, but I found a few new problems. I wanted to use carbon fiber with epoxy resin. The carbon fiber for a stiff piece with minimal weight. I also wanted to retain the clear resin for visual "cool factor" look. The airframe will be polished aluminum with minimal paint. That means I could use no filler since even micro balloons mixed with epoxy gives an opaque milky look filler. The finished piece should be given a coat of clear for UV protection. I used PPG clear urethane mixed for 80% gloss and 20% flat so it's a bit of a satin finish. It looks nice. I used epoxy rather than polyester resin for low shrinkage, better dimensional stability, and higher temperature resistance. The black CF will be in the sun and will heat to 200F or more.

I made my male forms from 1" thick styrene foam held to the airframe with double sided adhesive tape. That worked well. I used a small amount of epoxy adhesive to stick multiple sheets of the foam together. That caused some problem where I had to cut into the adhesive when shaping the foam. This is not a big problem but does require good filling of any voids created. The styrene foam can be coated with brushed on epoxy resin and then bondo over that. Sand to perfection and fill low spots with more bondo. Or, fill directly over the foam with clay. That's ultimately quicker and less messy. I used Jake Reyna's suggestion to cover the foam with duct tape overall with enough overlapping the aluminum so no resin will get on the aluminum. That method works fine. The resin separates from the duct tape so no multiple coats of mold release wax is needed. My big mistake on the forms was to not spend the time to get them smooth enough. Not being able to use filler requires that the forms be shaped perfectly and to be smooth. Every lap joint on the CF will make a bump. Every imperfection in the layup will later require sanding the surface smooth. That's using 150 or 180 grit at first and on down to 320 before putting on the final clear coat. Thin coats of resin can be brushed on during this phase and sanded off to fill the coarser sanding scratches. Due to not spending the extra hours getting the forms smooth my finished fairings have high and low spots and I'm disappointed in the outcome. The bottom fairings are better than the top. I can't take the time to do it over now so I'll use them. They do fit on perfectly and will be fastened with sheet metal screws.

It is way more difficult to do layups upside down as with the lower fairings. I found it best to use smaller pieces of CF cloth, no more than about 16" long, and let the resin begin to get tacky before applying the cloth. The resin can't be too tacky or it's difficult to slide the cloth around over the form. Smaller pieces of cloth means more lap joints and that means more sanding and smoothing later.

I used 6 oz./sq. yd. twill cloth. The twill weave squirms around better and is more "drapable" than normal weave. I thought I should use the twill because the shape is complex at the front where landing gear attachment, gear leg, and wing leading edge have to be dealt with. However, with the difficulty of upside down layups and needing smaller pieces, I didn't need the twill weave and could have used the closer/tighter weave of non-twill. I used 3 layers overall, but where overlap occurs it is thicker. Had I made my molds smoother, needing less sanding, and used tighter weave cloth, I could have used 2 layers. The 3 layer fairings are very stiff when mounted on the airframe and stiffen the fuselage sides considerably. All four fairings weigh 7 lbs. I don't need the rubber seals so that saves a couple of pounds. The fairings likely cost around 5 lbs overall. I may have been able to cut that a couple pounds by using two layers rather than 3.

I still have some more work to do to get better airflow at the front of the landing gear where it goes horizontally under the fuselage. This will be addressed when I work on the air outlet from the cowling. The TD get fits about 3/4" under the bottom of the fuselage and is a high drag item. I'll need to make a different entry step since the step is about 6" outboard of the original location.

If anyone wants to tackle a similar project and has a question, I'll try to answer.

Here are a few pics. Foam form coated with duct tape ready for layup. Should be much smoother. 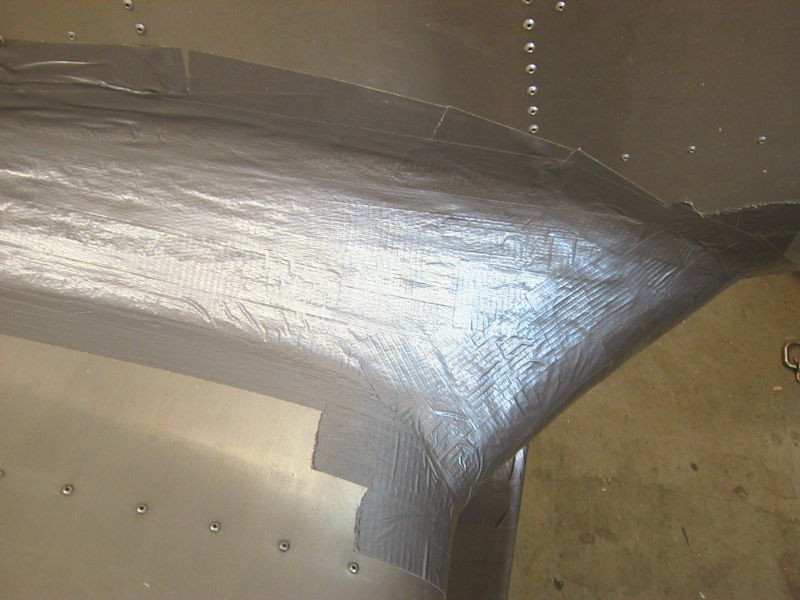 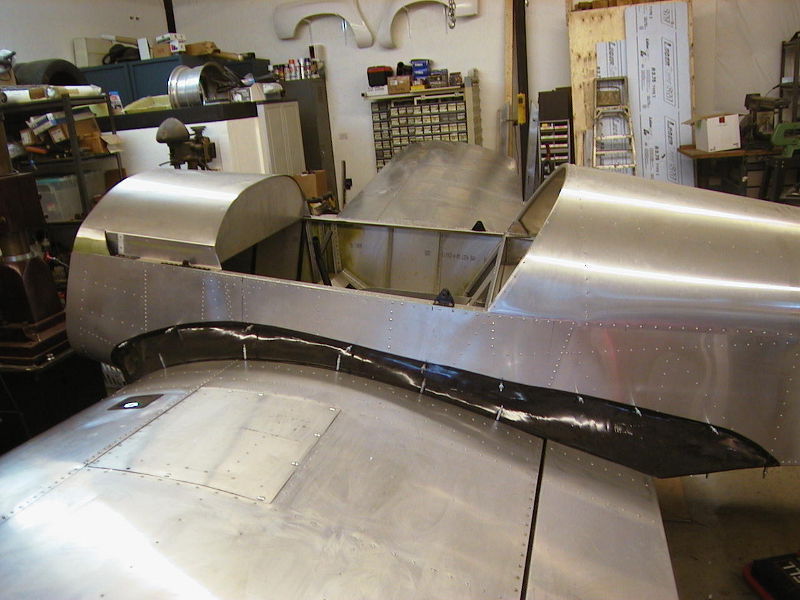 Detail of top fairing at front. 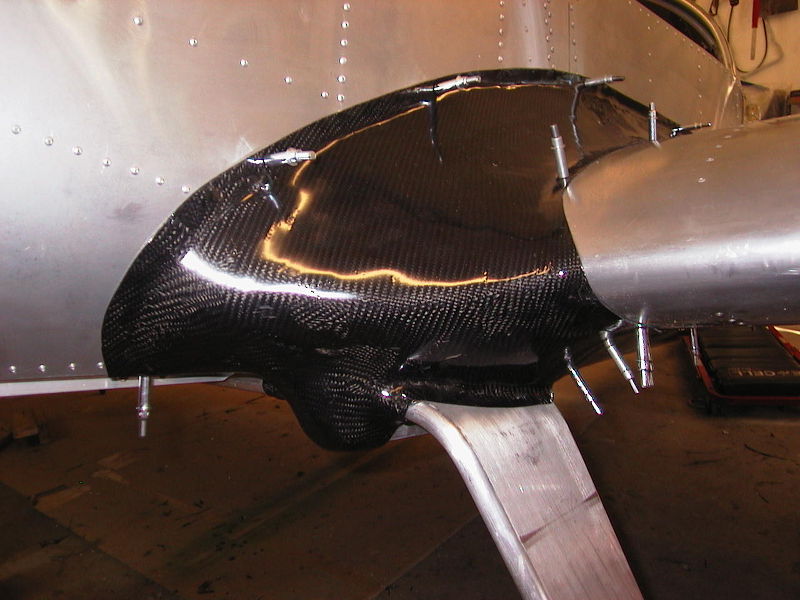 Side view of front of fairing. 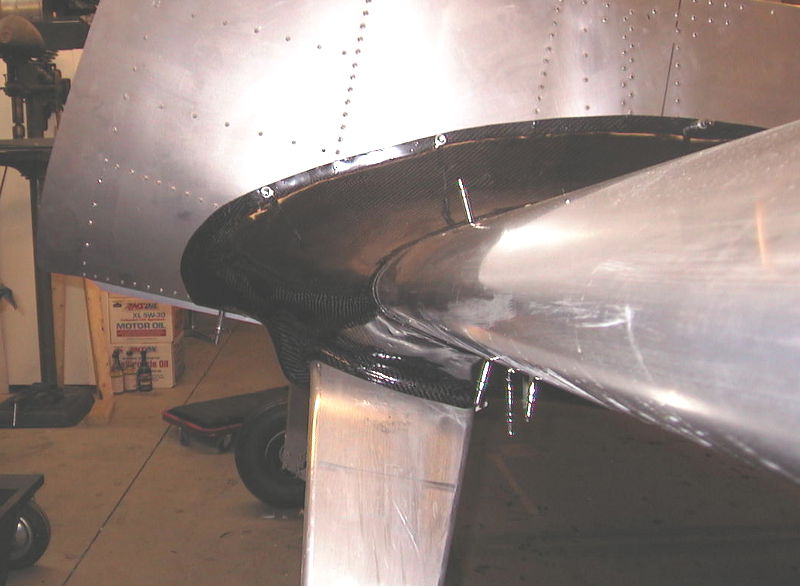 Looking toward rear from front past the landing gear. 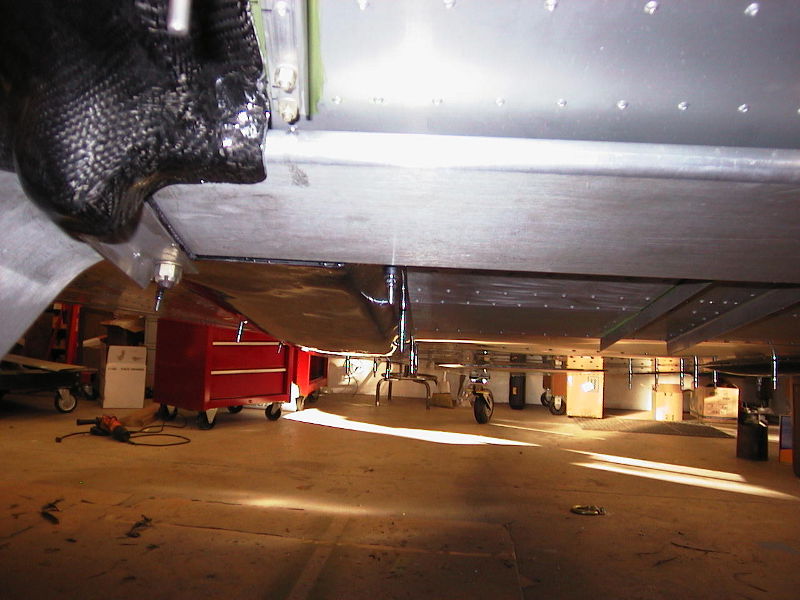 Under wing fairing from front behind landing gear looking toward rear. 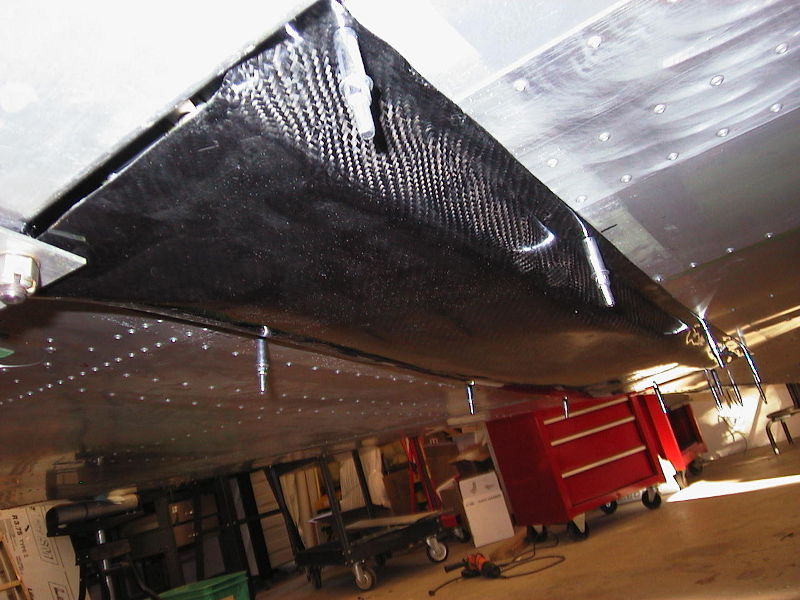 Fairings in the flap area. 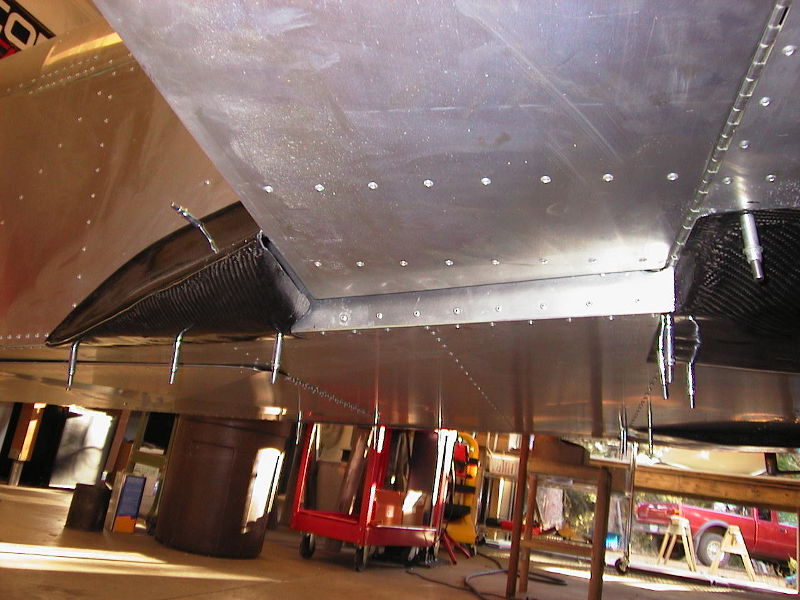 Comment by Louis W. Ott on October 21, 2010 at 1:14pm
Hi All,
Thanks for the compliments. Jake, your finished fairings look great. I knew I needed perfect molds to accomplish what I wanted, but hurryupitis got in the way. Oh well, lessons learned I guess. I ripped one of the upper tendons in my right bicep and that put me out of commission for airplane work for about 6 weeks. Then, hurry up to finish before winter came. I did find a tool I wish I had during sanding the concave shape. It's a bowl sander. It has a 1/4" spindle to fit in any drill and has a convex flexible backing disk. The disks have scalloped edges to prevent digging in and leaving gouges.

Juan - Yes, using the more dense blue or pink foam would have been a better choice and no doubt given a better result. The reason for the fairings and their shape stems from information from several sources gleaned over a number of years. Examples are Hoerner's book on drag reduction, Kent Paser's book "Speed with Economy", and various magazine and web based sources such as http://www.utdallas.edu/~klaus/Airplane/wing_root_fairing.html, http://myaviationtutor.com/aerodynamics-of-flight/aviation-parasite.... I felt the advantage for the 601XL would be found in lower stall and landing speed, higher rate of climb, and equal cruise speed at lower power. The 601XL/650 fuselage width changes along the wing root chord being narrow at the leading edge, widest about 2/3rd back and sharply narrowing again at the trailing edge. This change in fuselage width causes air to flow span wise as it transits from front to back. This causes loss of lift, turbulence, and drag. Ideally, the fuselage width would be constant width from leading edge to trailing edge. Van's RV designs attempt to keep the fuselage width constant at the wing junction and don't need such fairings. I extended the fairings behind the training edge to help contain the higher pressure air under the fuselage and keep it from curling upward at the trailing edge of the wing root. The TD landing gear is mounted so it is under the fuselage bottom with about 5/8" space between the top of the gear and bottom of the fuselage. This is a very high drag source. That coupled with the high drag method of attaching the gear had to be fixed. That's why I brought the fairing forward and wrapped it under to enclose the gear attach hardware. I think that will help smooth the air as it goes over the inboard leading edge. The tri-gear arrangement is much better in the wing root leading edge junction with the fuselage.

Gary - Thanks for the gear fairing information. I do plan to fair in the rear of the gear legs too. I figured an aluminum sheet, or CF, fairing should help drag reduction as well as give a channel to place the brake line. I have wheel fairings but I felt they were needed to keep rocks from throwing back and denting the flaps and stabilizer leading edge as much as drag reduction.

Comment by Jake Reyna on October 21, 2010 at 8:51am
Louie, you did a great job! Unfortunately, you are also a critic. That being said, you're much better at composites.

Since I wasn't looking for the "cool factor" of carbon, I was able to sand down my wing root fairings to remove the high spots, in some places paper thin. I filled low spots with an epoxy glass bubble mixture, cured, sanded and then added one layer of 9 ounce cloth. There is still work to be done, but they were good enough to mount and start test flying. I managed to keep the weight to 2.75 pounds each and expect a completed weight of 3 pounds each. The rubber seal weighs 1.5 pounds. A 4.5 pound weight gain, but a big reduction in drag under the wing. Thought I had better pictures, here are a couple. The first is the rough fairing.

Comment by Juan Vega on October 21, 2010 at 8:40am
that looks fantastic!! Few questions. Would you suggest using blue foam? it looks to sand better. also while I was looking at it, I rememner reading that the airfoil lift is calculated all the way to the wing root. Even though the 601 has tons of extra lift with its voluminous wing, I would how we can calculate the lift lost due to wing faring changing the lift. would it effect the plane number in a stall turn? I doubt it but curious.
we probably eed to turn to some of our engineering guys on here, cause I know enough to be very dangerous. I plan on copying your design!
Juan

Comment by Gary Ray on October 21, 2010 at 6:56am
Thanks for sharing your experience:
This helps since I want to do the same.
I have made simple gear leg fairings to test for increase speed and find that there is at least 6 mph or approximately 100 f/min better climb by tapering the straight section of the gear legs plus wheel pants. I measured the biggest increase with the leg fairings and not so much with just the wheel pants. The bolts and brackets that hold the gear on are also out there in the wind and could use streamlining. I think there is a lot of improved performance to be found in these mods with very little additional weight and expense.

Comment by Phill Barnes on October 20, 2010 at 5:24pm
Hi Louis
Looks like you got a good result in the end. One little trick I will let you in on from building model aircraft with foam core wings for 20 years, is when you want to glue polystyrene foam together and sand it without seeing a hard join line, use 3M 77 spray adhesive. It is latex based so it does not dry hard but sticks better than s**t to an army blanket.