on the Hobbs.  My engine had the same problem but I did not understand what was going on soon enough so the cylinders were trashed on my motor.  We caught the problem early enough on his engine to save the cylinders which saved my brother a few thousand dollars.)

The round trip from KSTS to KSHN and back to KSTS was 1,368 statue miles.  The GPS track is pictured on the right.  I flew up on the easterly leg and came back home down the coast.  The trip up included a single 20 minute fuel stop, after 6.2 hours, and took a total of 7.6 in-air hours.  The trip home was non-stop 6 hours. Yes, my Zodiac can fly much faster than this but burns way more gas when flown fast – so I don’t unless I am really pressed for time.  All the fuel burned was premium auto gas except 5 gallons.

When I plan a trip like this, I try to find a path over the ground I have not flown yet.  That is getting nearly impossible close to home but a few hundred miles out I can usually find something of interest I have not seen before or at least not recently.

The trip up included some low flying in central Oregon.  There are wide-open areas that can be flown safely at 30 feet if you like.  The Zodiac is very good at low-level terrain following or scooting down an empty country road where it can take tight corners much like a sports car.

On the trip back, in northern California, I had to climb to 10,000 feet to avoid heavy smoke from forest fires.  It was nice and clear up there and very murky below.  As I arrived home it was 8:00pm and the tower closed down.  I took the opportunity to practice a dead-stick landing from 10,000 feet into my home airport.  That went well with touchdown about a 1/3 of the way down the runway.  I coasted off the active runway and then taxi to my hanger.  Another trip over and done with.

Here are a few pictures.  Nothing special, just some of what I saw along the way. 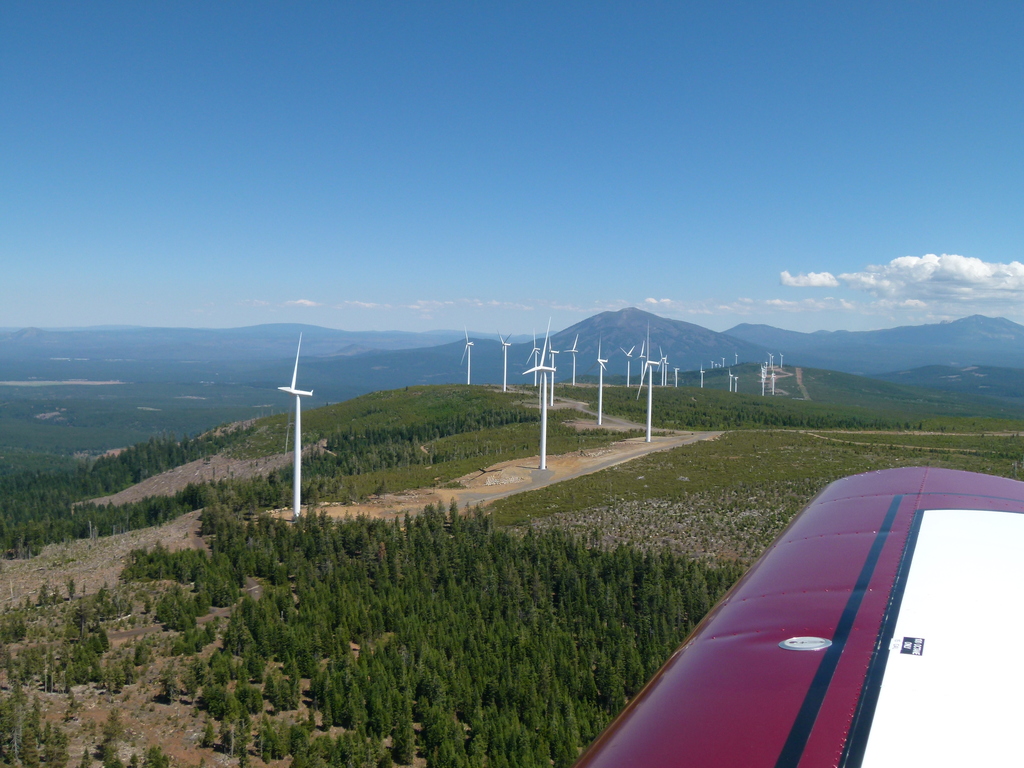 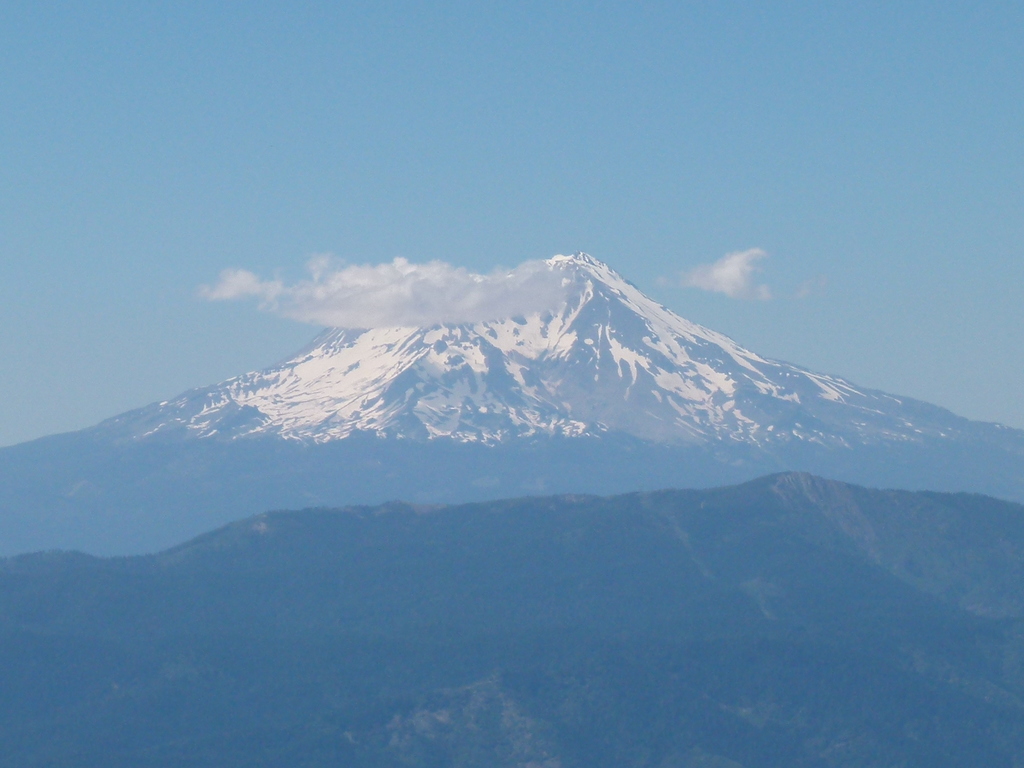 A cinder cone just south of Lava Beds National Monument. (Got some massive lift here at 6,000 was climbing between 900 and 1,700 feet per min for several thousand feet.  This was a huge thermal above the south-facing dark lava fields). 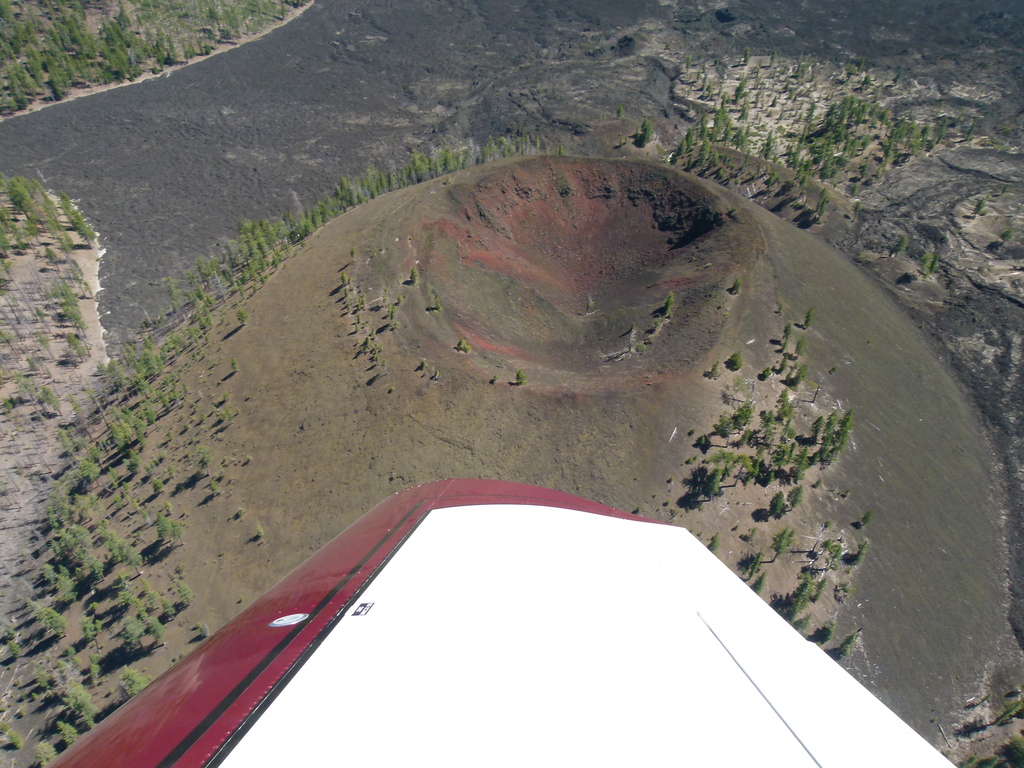 A typical view of the country side in central Oregon.  Mostly wide open spaces with a few farms where the water flows. 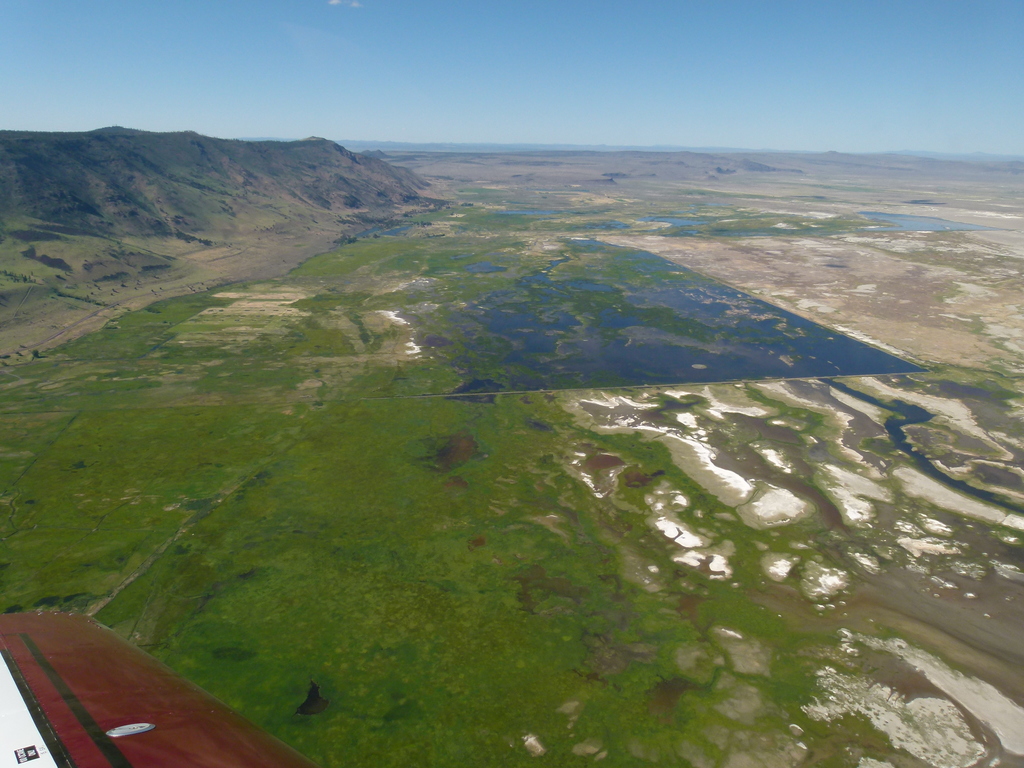 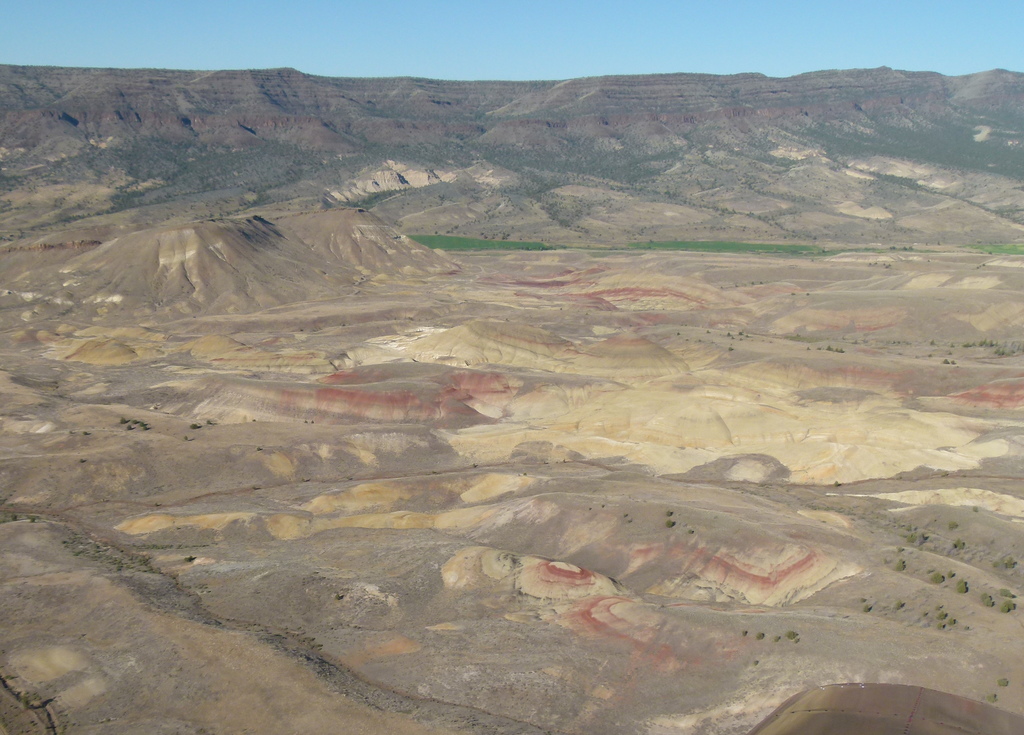 I flew along the John Day river for about 20 miles.  Low enough to wave at the folks floating along in rafts and canoes but not so low as to alarm them. 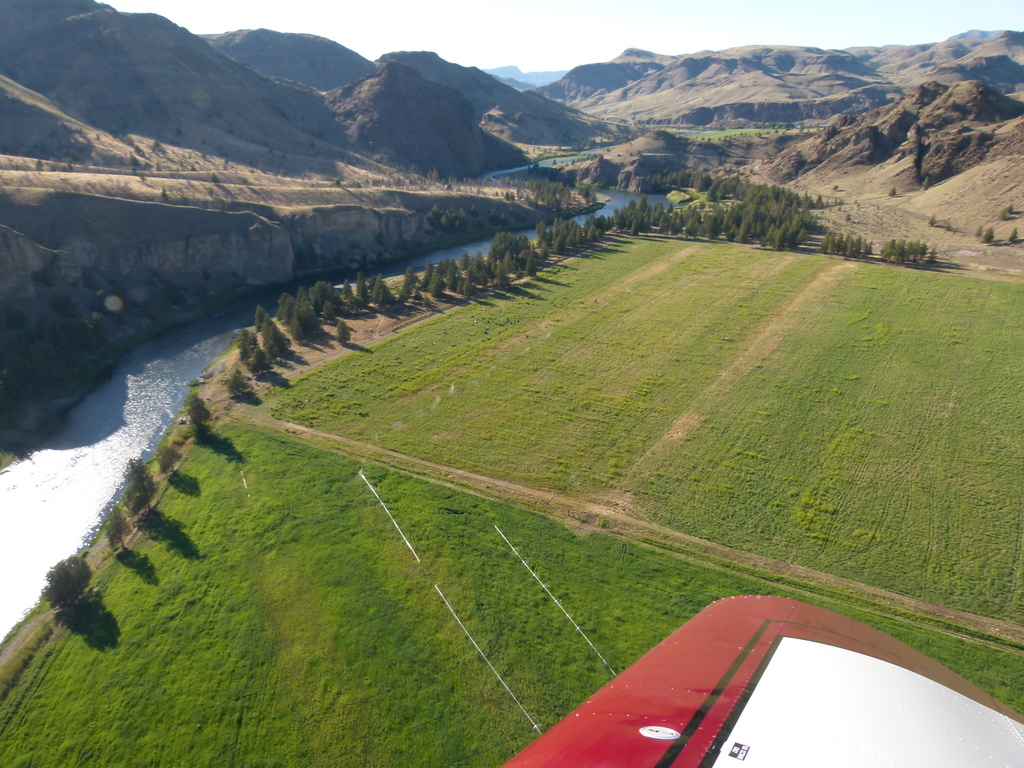 The view of Mt. Hood.  Taken while on final into my fuel stop at Hood River (4s2). Just after the fuel stop, looking north at Mt. Adams.  No time to buzz that one.  The sun is going down soon.  Maybe next time. 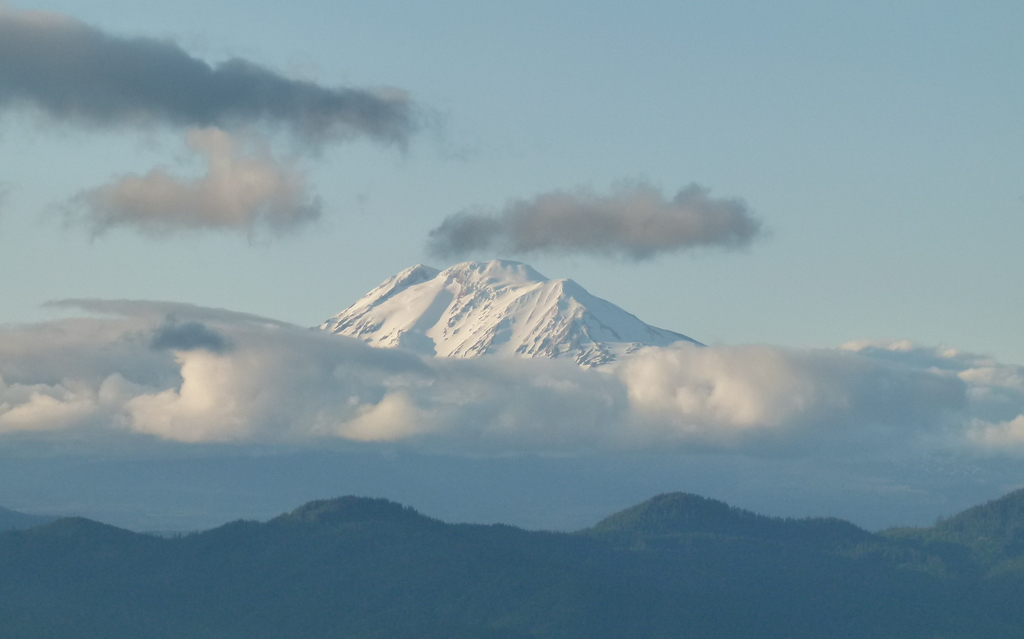 The view out the window on the way home was often hazy.  Here is the loan picture worthy of posting.  Saddle Mountain, Oregon.  Did not get close enough to wave at the hikers this time. 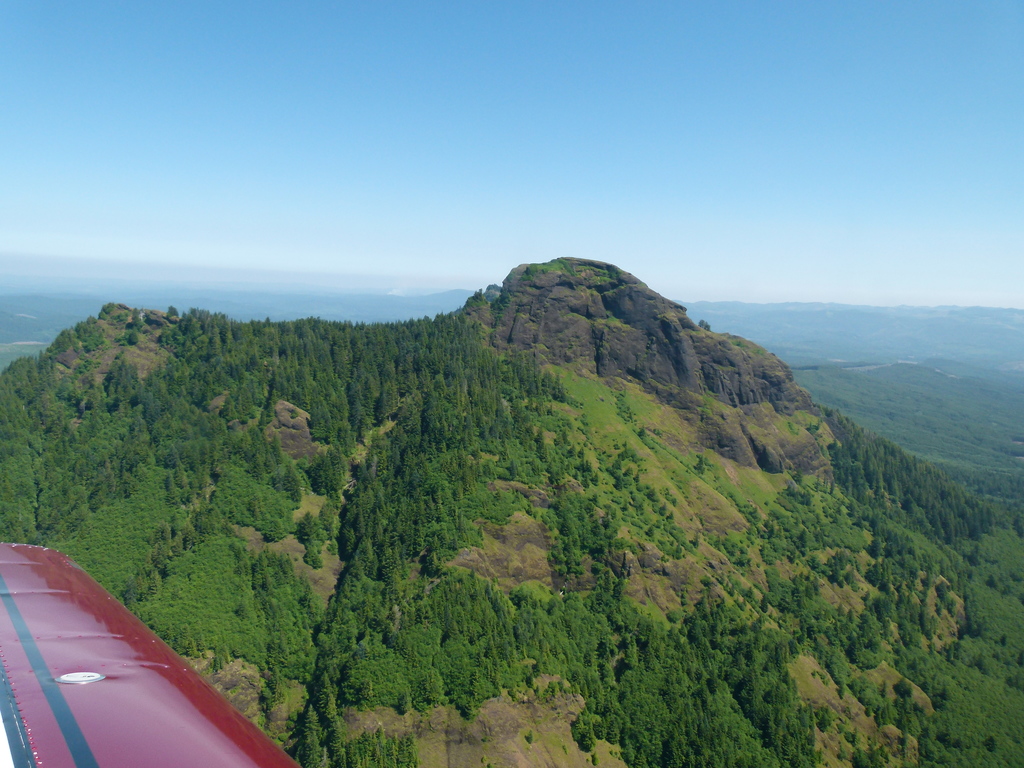 Here is a picture from 10,000 feet of the smoke in northern CA.  Not a pretty picture - just documentation. 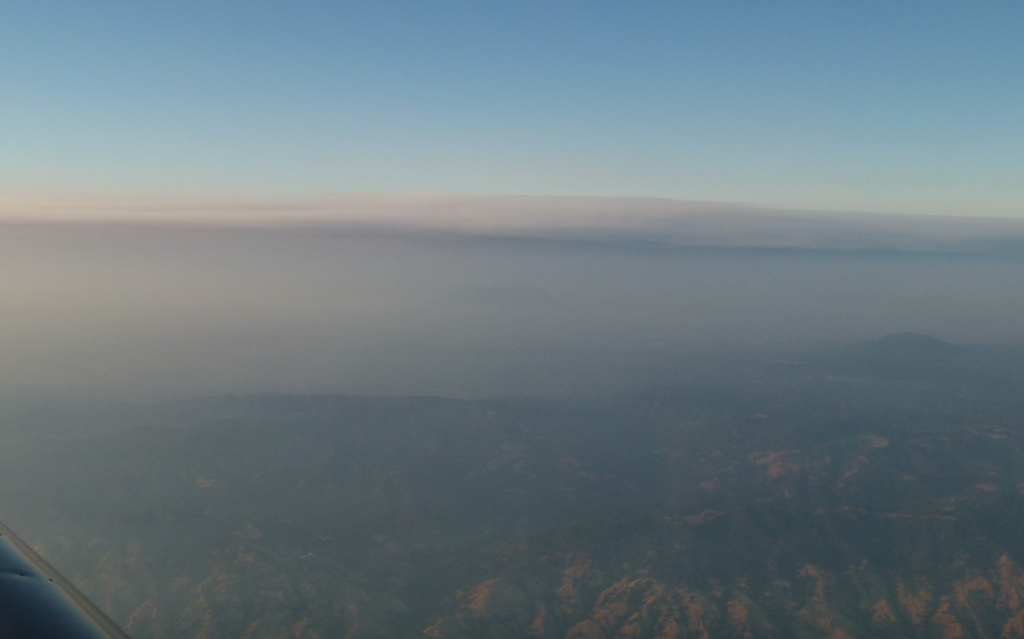 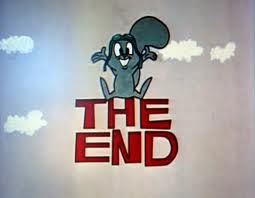