My kids gave me a GoPro Hero 5 Black for Christmas, and during an episode of "cabin fever," I decided to fabricate an external mount for my STOL 750.  I had seen a similar, commercially available mount with a cam lever bolt that allowed for quick installation on a tie-down ring without tools, so I decided to make my own version: I happened to have a piece of 3/16" 6061 that was bent 90 degrees.  I drilled it for the mounting bolts, powder coated it, and glued rubber pads to the opposing clamping faces so it would grip the tie-down ring securely.  An economical source for lever-cam clamping bolts are bicycle seat post clamp bolts that can be obtained for about $6.  I put a rubber washer under the nut, and once the nut is run down snug, actuating the cam lever seems to provide just the right amount of tension.  For safety, I cross-drilled the bolt and inserted a locking clip.  I also drilled a small hole through the entire assembly and once in place on the tie-down ring, fasten a zip tie through the hole.  In the event the bolt broke, this would keep the entire assembly from departing the airplane!  The ball joint camera mount was about $16 on Amazon and works great.  It allows for 360 degrees of swivel and also a large angle up and down.  I have an aluminum GoPro case to hold filters (neutral density to stop rolling-shutter prop effects and an inexpensive UV filter to protect the lens and ND filter).  The case's lanyard is zip-tied to the mount as an extra security measure. 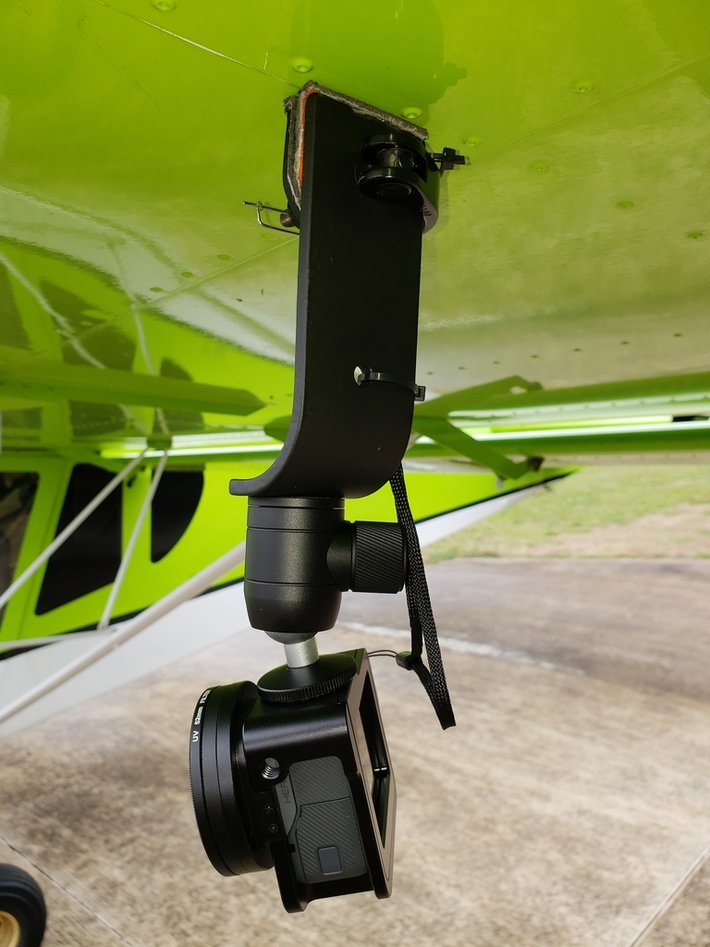 The mount is very secure, but the camera does vibrate slightly in some conditions, but not in-flight - when it does vibrate, it is not noticeable on the video, probably due to image stabilization?).  I plan to shorten the mount by cutting down the long arm and reduce the moment-arm of the camera and this should lessen any tendency to vibration.

I deliberately included the FLG in the shot as I have Zenith's new "donut" suspension system and wanted to see it in action on my turf strip and also observe if there were any adverse vibrations in my front wheel "mud flap" that keeps the 750's belly clean.

Permalink Reply by Gary Reed on January 19, 2019 at 10:21am
Good bit of cobbling up a workable solution.
You say in your write up that you zip-tie the assembly to the ring, just in case the bolt lets go. My fear in that situation would be that the assembly would then beat the crap out of the bottom of your wing while swinging in the breeze. It might be better to sacrifice the camera. Just food for thought.

Good point, Gary!  Since I have zero experience with the dependability/strength of this cam lever bolt, I felt I needed a safety in case it failed, hence the zip-tie.  One thing that I think will reduce stresses is to shorten the unnecessarily long mount, which I did this morning.  As I was doing this, I thought about your observation and decided two zip-ties - one near the max diameter of the tie-down ring hole aft and one forward, would be a good solution.  Here's a pic of the "Camera Mount 2.0": The two small holes adjacent to the bolt and washer will each have a small zip-tie.  If the bolt breaks, the whole assembly can fall down only a fraction of an inch since the zip ties are near the max diameter of the tie-down hole (the cam lever bolt is actually at the bottom of the tie-down hole and not centered in it).  The top of the mount has padded, square shoulders.  I checked and the mount (sans bolt) can not slip down enough to be able to rotate backwards in the slipstream because the square shoulders will catch on the bottom of the wing and stop it from rotating backwards.  The wing skin overlies a rib in the area where the mount's padded square shoulder would contact it and is very strong ... I don't think it will damage it.  Certainly it would be better than the entire assembly flailing back and the camera pounding the underside of the wing!

I guess using the zip ties makes it not quite "tool-less," but "almost tool-less" as it only will take a couple of quick snips to remove the ties.

BTW, with your same reasoning, I'm going to shorten-up the camera's lanyard and attach it closer to the ball joint so there would be no way if the camera came out of the mount that it could swing back and hit the wing!

There are removeable zip ties that have a little tab  you can depress to release the tie.

Do you have any info about or close-up photos of your nose wheel mud deflector that you can share.

You'll find a close-up and info here: 750 Mud Flap It's a modification of a flap I saw on John Heather's plane.