Sounded like a good to me until sometime said they didn't like them because it was too easy to inadvertantly bump them by mistake. I was wondering what others experience is with this setup?
Thx
Gary

I have Ray Allen stick grips with trim switches on the pilot's grip (dual sticks) in the 12 o'clock and 6 o'clock positions and I really like the setup and have no problems with inadvertent activation. It is so intuitive to have the switches mimic the stick motion: i.e., pushing the switch at 12 trims the nose down as if pushing on the stick and pushing the switch at 6 trims nose up as if pulling the stick back. In my 750, I found that the trim was way too fast - I had to "bump" the switches back and forth to set the trim precisely. So, I installed an adjustable Ray Allen trim speed reducer and slowed the trim down. Now I can easily set the trim without having to bump and hunt for the "just right" position. Not very expensive and highly recommended!

I would like to also add the flaps to the left and right buttons on the grip. I've got the switches pre-wired with grounds, so a couple of relays will be all it takes ... always another project waiting on me!  ;>)

Ray Allen on mine.  I just have a PTT switch for the radio but regret not getting the trim switch option on the stick.  Because my panel is so cluttered I had to put the trim switch in a not ideal spot on the panel.  Not the end of the world, but still not as ergonomic as it should be.

I'll probably switch it around eventually and get the trim option for the stick.  On the "Y" stick, maybe it can be accidentally bumped while moving it around because of the angle the grip is at.  I can't see how that would happen on the dual stick option though...

Trim switch on the stick is a bad idea. Inadvertent operation causes potential issues.... I watched a student struggle to keep the nose up on final approach, when he started to get distracted by the effort I told him to get his fingers off the trim switch in his aircraft. You do not use the trim enough to warrant cluttering up the stick (panel is larger than the knob on the stick). No "Fire Guns" switches either, if you don't use it often "KISS" principal applies. (Keep It Simple Stupid)

I dunno, Bob ... keep in mind that a lot of the ergonomics such as dual stick vs Y stick, trim on the grip vs the panel, etc., are heavily biased by prior experience and training. I'm biased to trim on the grip because the last two airplanes/last 2500 hrs prior to the 750, had the trim on the grip, too.

I would agree that a student, who already usually has a tendency to put a "death grip on the grip," might not do so well with an electric trim.

Rather than "cluttering" the stick, I look upon electric trim on the grip as a safety issue - when flying "low and slow," anything that avoids heads-down and keeps the eyes looking outside is a plus. That's also why the military tends to load up the grip with switches so the pilot can stay head-s up.

I did, however, deliberately mount the flashing LED trim indicator right in front of me so it is pretty obvious if the trim is in motion.

I agree that there are unintended consequences sometimes ... it just happens to work for me.  ;>)

I'm in the trim switches on the stick gang. As already pointed out, it is one less thing to look for on the panel, you can trim with your thumb without ever looking inside and without ever letting go of the controls. A good thing.

I personally prefer a "top hot" type trim switch rather than a Ray Allen type with individual buttons -- the "top hat" is very intuitive and also makes using the aileron trim second nature and stupid easy to do. My bird will have aileron trim in addition to elevator trim. It is also more difficult to engage accidentally because you need to displace it from the center position as opposed to just a gentle push on the little button on the top of the stick. There is a distinct clicking feel as you pop it out of the center position, at least on a good quality "top hat" switch that gives you good tactile feedback that you have engaged the trim switch.

I hope/plan to have transponder ident and radio PTT buttons on the stick grip, also. Again, it is nice to not have to locate a control on the panel, you can do it while never looking inside and never letting go of the controls.

As already pointed out this is largely a matter of personal preference so do what seems right for you. In my 45 years of flying I spent 38 of them flying USAF or major airline equipment (while flying general aviation on the side) and have grown accustomed to having numerous control functions on the control stick/yoke or on the throttles. I miss that in my current ride (a 1947 Stinson) so plan to set up the 601XLB with stick grip buttons.

I have used both, buttons on the stick for elevator trim while training and switch on the panel when I am flying my 750. Personally like the buttons on the stick for the simple fact I don't have to find the switch on the panel, it also leaves my left hand free to be on the throttle, not so bad in normal flight but on landing I don't take my hand off the throttle. It took a bit of getting used to with the PTT switch in the middle but it did not take long to master it, and I don't mean just getting by and making it work, I had no problems once I got used to the three switches. I do like however the flap switch on the panel, I think it makes the most sense and would clutter up the stick with all three. The rocker switch (top hat) sounds like a good alternative but I don't know how you would put  PTT switch there. The red indicator light makes sense so you know when you are activating the button.

Permalink Reply by Gary Welch on March 19, 2015 at 10:46pm
So many who thought out and explained comments. I am learning that this is a great group of pilots and builders. The basic idea of not taking my eyes off the outside to find a switch has really swayed my opinion on this and i am going to plan on the elevator and aileron switches on the stick. Thank you all for the responses. I really appreciate it!

My current plan is to have the pitch trim on the centre stick and roll trim switch on the panel. I like the idea of not having to look for a pitch trim switch and also like the logic of having both pitch controls in the same place used by the same hand. I don't expect to be using the roll trim as much as pitch trim so I think it could be off the stick. I am also considering having the flap switch close to the throttle so that it is selectable relatively easily with the throttle hand. Throttle and flaps seem to have a certain logical connection from a drag/speed perspective.

I went with Ray Allen on the stick, though not with the typical on top of the stick buttons. Like it was mentioned, a lot of it is what you're used to, and what your mission is, and that drove my decision. I wanted the HOTS system, Hands On Throttle and Stick, though not for playing Maverick in an F-14, but to ease my workload.

Though I'm used to it, and have no problem handling trim and flaps on the panel in airport to airport operations, in backcountry areas you can playing a little hand dance with panel flaps, panel trim, holding the stick, and holding the throttle, etc, all while staring straight ahead at the 500 ft strip and the trees on both sides waiting to grab you. I personally don't like letting go of the throttle or stick to do adjustments in times like that, I just want to fly the plane and focus straight ahead.

Because of that, I went with the Ray Allen G3 system. I didn't want the buttons on the top, as I felt someone that is not used to that system would not be familiar with the markings, etc, where with the G3 anyone can easily see what's what. Also with the G3 you won't be accidentally hitting switches and buttons, they're out of the way, not where your hand or thumb would normally rest. The mic switch is your trigger finger, and that is the only thing I don't care for, but because I'm not used to it.

My MGL Odyssey has trim, flaps, AP indicators, so on tough approaches my left hand is on the throttle, and my right hand is on the stick, and I never have to move them until I turn off the engine. That also goes for departures also, I know  like a lot of others I have had a throttle creep while departing and hitting flaps and trimming out, and I didn't want to mess with that at a high DA situation where my hands might be a little full just flying the plane.

The down side, it looks about as unconventional as the 750. I had to trim my stick down so it would sit lower, but I'll take it for the HOTS system of easing my workload. With electric trim and flaps, it's nice to just sit there and hit a button with your thumb and fly the plane. It's especially useful when maneuvering low and slow close to the ground, and your hand is always on the throttle for unexpected downdrafts or winds. 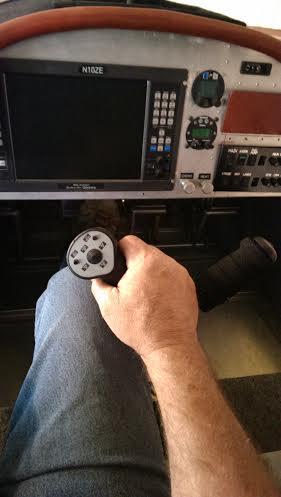 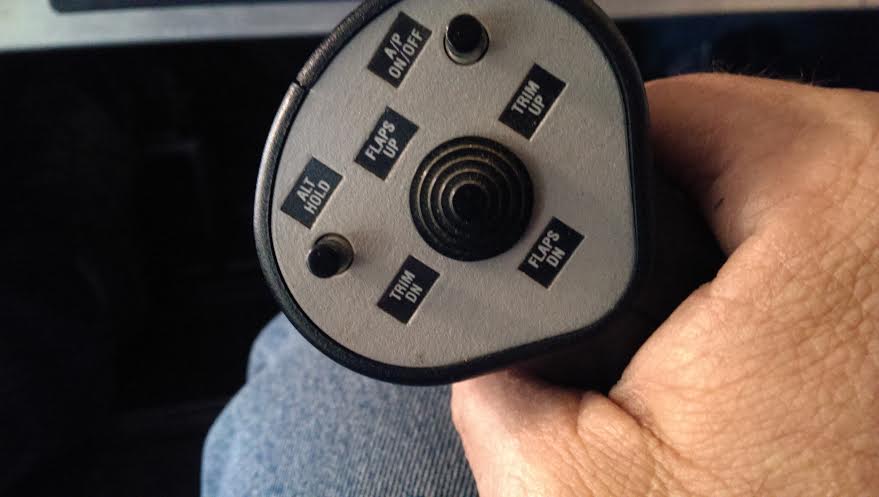 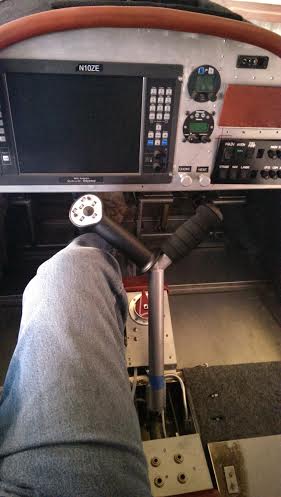