My whiskey compass has a very slow leak and needs new seals.  However, I "might" want to use that mounting hole for an AOA such as the AeroVonics (just bought by uAvionix!) AV-20s that is "probeless" and a simple installation, so I thought I'd go ahead and install a MGL SP-6 magnetometer connected via the CAN bus to my MGL XTreme mini-EFIS so I can remove the old compass and reserve that mounting hole for a future AOA or some other gadget.  I've already got the MGL RDAC-XF, SP-7 AHRS, and 2 servos on the CAN bus and the SP-6 can be daisy-chained to the same bus: 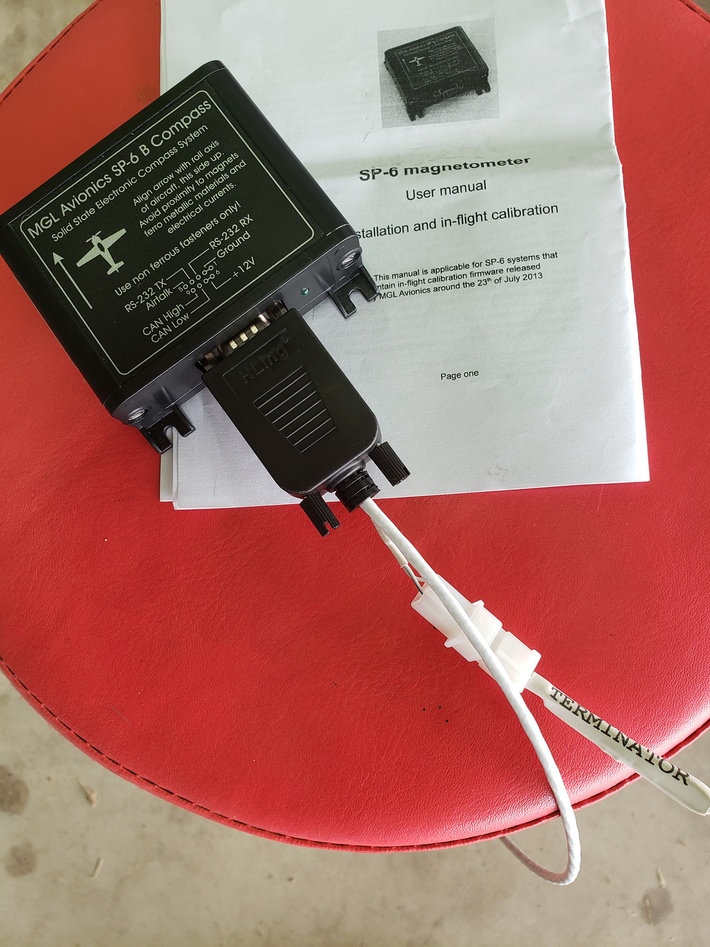 Dan Niendorff mentioned he put his magnetometer in the rear fuselage of his 801 and that sounded like a good place in the 750, also, as the area aft of the belly hatch is largely devoid of any ferrous/magnetic metals.  I used a compass to verify this was a good area and installed a simple shelf attached to the first transverse L angle immediately aft of the hatch.  The only non-airframe object very close was an ADSB-In antenna less than a foot away, but it's a passive antenna so I didn't expect a problem. There is a wire loom running just in front of the shelf, but it's ELT wiring and typically not active - I hope!  I suspect the steel mandrels in a few rivets would not be a problem, but just to be cautious, I elected to bond the shelf to the L with West System's G-Flex epoxy.  I've used this epoxy for years and it bonds aluminum very well - especially if you wet the aluminum surfaces with epoxy and "scuff through" the wet epoxy into the aluminum with 80 grit aluminum oxide abrasive and then clamp it.  I also bonded the trailing edge of the shelf to the fuselage skin with the same technique.  The shelf is angled to be perfectly parallel to the SP-7 under the passenger's seat.  If the SP-6 is not at the same attitude relative to the SP-7, errors will result.  If it is correctly oriented with a SP-7, the SP-6 will provide reliable heading information even in turns!  The simple shelf looks like this: 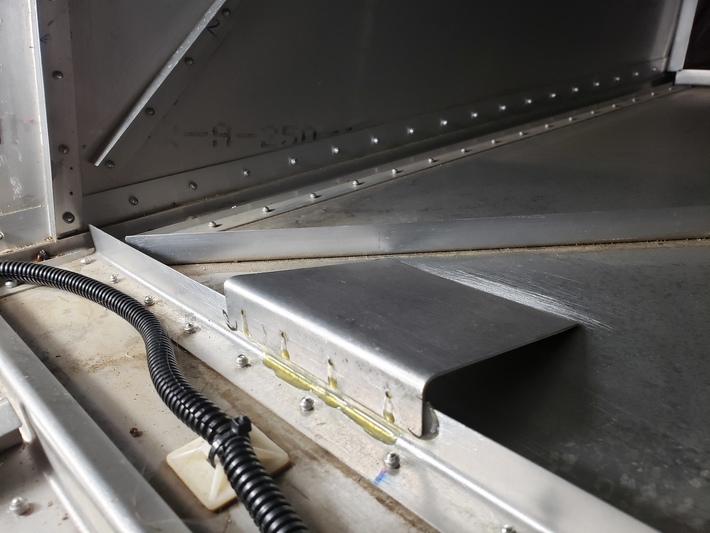 After mounting the SP-6 with adhesive Velcro (as recommended by MGL), I checked the angle with a digital protractor - when I zeroed the protractor on the SP-7, I got "0.3 degrees," as you can see, I got the identical result on the SP-6: 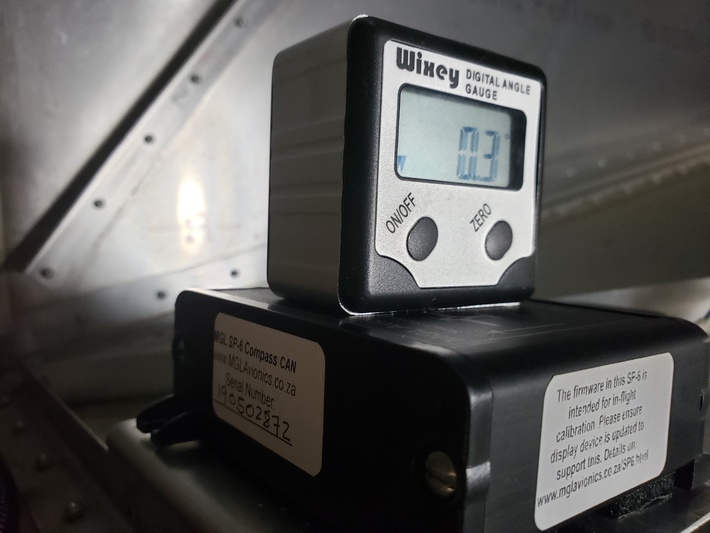 After mounting, I flew an in-flight calibration: a series of turns, descents, and ascents.  The SP-6 constructs a 3-D image of the ferrous and magnetic materials near it and calibrates itself to compensate.  A MGL EFIS will give a read-out of the number of samples and the "fit" of the compensation - anything 98% or greater is very good.  On my calibration flight, it achieved a 99.3% "fit," which is about as good as it gets.  The accuracy of the compass is about +/- 1 degree with that "fit."

Just thought I'd pass this along if anyone is considering installing a magnetometer in a 750 airframe.  As I said, the MGL SP-6 automatically compensates for magnetic field disruptions, but likely other magnetometers would probably work well here, too.

P.S.:  The MGL SP-6's are $260 + shipping in the U.S.  "Parts for Aircraft" is the European MGL dealer, located in the UK.  With the present favorable exchange rate and minus the VAT tax, a SP-6 is only $215 including Royal Mail Priority shipping, which got it here in about a week!

Great write up and pictures as always.  I had not thought about the potential for the steel rivet stems to interfere with the magnetic field.

Obviously, there's a whole "cloud" of steel mandrels surrounding the SP-6 inside the riveted 750 fuselage, so I doubt a few more in the shelf would be a big deal.  However, I figured "less is more" in the sense that perhaps it would be best to avoid riveting the shelf and introducing any more steel even closer to the SP-6.  Of course, one could use brass, nylon, or other non-ferrous fasteners, but one advantage of the epoxy is that I could lightly clamp the shelf in positon and then put my digital angle finder on it and move the shelf up and down until I got the precise alignment I wanted, and then firmly clamp it till it cured.  The SP-6 is only 6 oz., so there really won't be too much stress on the shelf.  In my past experience with G-flex epoxy, it will deform the aluminum before the bond breaks.

John, I installed the MGL SP-6 and AV-1 display in May of 2017 rather than repair or replace my vertical card compass which was misbehaving. I installed the SP-6 on the fuselage floor aft of the access door using brass hardware. The combination has been rock solid and trouble free ever since. After the in-flight calibration exercise it has been very accurate on all courses. I am a happy customer, 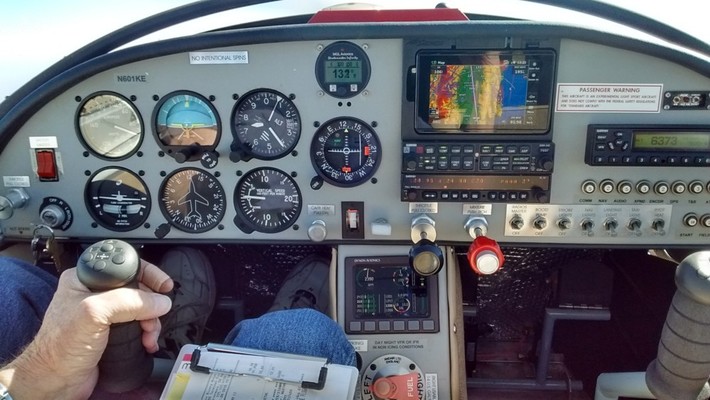 Glad to hear that report, Stan!  I've had good luck with all my MGL products so far, too.  It really was close to "magic" to fly the calibration flight and watch the SP-6 automatically adjust and compensate - the most user-friendly set-up I've ever encountered with avionics  The accuracy is near-unbelievable!

Permalink Reply by Daniel Niendorff on October 17, 2019 at 1:59am
Well done John! Great write up!