Going to do a partial vinyl wrap on my polished plane

I've been planning to do this for some time but didn't have the money until now. The vinyl comes in 5 foot wide rolls and I ended up buying 40 feet of blue, 25 feet of black and 5 feet of grey. The cost for the above was $611. I've also ordered about $50 worth of supplies and knifeless tape.

I've attached a pic of my design. Since my day job has me working in AutoCad it was easy for me to develop my design with this software. The downside is you can't get any real sense of the actual colors.

I spent hours and hours scouring the web for design ideas. I knew I wanted something that would accentuate the elegant lines of the fuse. I played around with a lot of different ideas and designs. In the end my wife (and wonderful co-pilot) really helped me get to the final decisions.

The nice part of this design, I discovered today, is that there are very few long pieces of vinyl (longer pieces can be a lot harder to work with).  The natural breaks in the 601 canopy and at the rudder result in pieces being shorter and more manageable. This should help me do a better job. The only vinyl I've done before is what I covered my panel with (3M Di Nock Carbon Fiber).

The panel was was amazingly easy to do. This new tech. vinyl is not at all like the vinyl form back in the day. This stuff breathes, doesn't create air pockets or creases, is re-positionable , and stretches up to 30%. It's also very durable and can be removed easily in the future.

I'm really looking forward to getting started and will post pics and vids as I go.

I'm not sure why but the attached pic doesn't show the dark colors correctly. The curved dark stripe down the side is metallic black, not grey. Likewise the flaps are mostly black with grey just on the outer edges. The dark accent lines on the curve of the wings are also black. The wing tips themselves will be grey as will the the curved stripes at the top of the fuse near the canopy.

Gary, I second what John said...the plane looks great.  I learned a lot from this thread, I'm definitely going to give it a try when the time comes.  Thanks for documenting this so well.

One last item to add to the vinyl wrap learning experience. The most challenging part for me was the cowl and I have heard the same from others. The partial solution for me was to add additional seams and that worked out pretty well with some trial and error.

However, many have said that doing a spinner is near impossible for an amateur. After multiple attempts my "final" effort still looked like crap. Too many wrinkles that were very noticeable. I had spent nearly 6 hours attempting to do this relatively small piece and had pretty much resigned my self to living with the crappy job. But it bugged me and I kept thinking there had to be some way to do it better than what I had done.

I remembered a video of a motorcycle helmet wrap on youtube. In the video the guy was using a special type of super conforming vinyl. Using a standard barrel with an open end he placed a large piece of vinyl, sticky side up over the top of the barrel opening and taped down the vinyl very tightly around the outer edge of the barrel. He left some slack in the vinyl so it sagged a bit into the barrel. He then heated up the vinyl and simply pushed the helmet down into this super-stretchy vinyl - and, after it cooled, pulled out a near perfectly wrapped helmet.

I knew this would not work with the spinner as it is deeper than the helmet and the 3M 1080 vinyl I was using would not stretch as much as what the guy was using. Then I realized I did not have to wrap the entire spinner. What if I continued my original idea of doing it with 3 seams, lined up with the 3 prop blades?

I would only need to do 1/3 of the spinner at a time and just had to stretch down on the vinyl enough to cover 1/3 of the diameter.

So I grabbed a trash can and cleaned the top off really well. Then I cut a 30"x 30" piece of vinyl and taped it, sticky side up to the top of the can. Then I placed the knifeless tape where the cuts needed to go. By coincidence I happened to have a spare spinner that was about the same size as the one on the plane, so this is what I used for my experiment.

With the heat gun on high I heated up the vinyl, grabbed the spinner and slowly but firmly pushed it down into the softened vinyl, making sure I pushed it down far enough to cover the cutting tape border. Then I held it there for a minute or two for the vinyl to cool, and then grabbed my razor blade and cut the spinner out of the surrounding vinyl. It worked! The spinner was completely covered (1/3) and it had laid down perfectly. There was not a single wrinkle or bubble. Honestly I was shocked that it actually worked!

I immediately pulled the spinner off my plane and pealed off my crappy vinyl job. I'd like to say it worked perfectly on the real thing, but it didn't. My spinner was a little bit fatter and the vinyl bunched up around the edges. However, it was a fairly easy fix and I probably spent a mere 10 minutes to get out the wrinkles. I then did the remaining 2 sections, using a small over-lap at the seams. Ultimately I ended up with a "near" perfect job.

I would suggest that unless you are a pro wrapper, this is the way to go to wrap a spinner. The whole thing took about an hour for a near perfect job. I spent nearly 6 hours to do it manually and that looked like crap.

The first pic is the garbage can with the vinyl ready to go.

The second pic is me stuffing the practice spinner down into the heated vinyl.

The third pic is how it looked after I had cut the vinyl out of the can. You can see the cutting tape. At this point I had not touched the vinyl on the spinner. It just came out perfect without a single wrinkle or bubble.

The final pic is after I had used the cutting tape and smoothed down the near perfect edge that it cuts. This truly was "perfect" with the only visible imperfections being from the spinner underneath the vinyl. 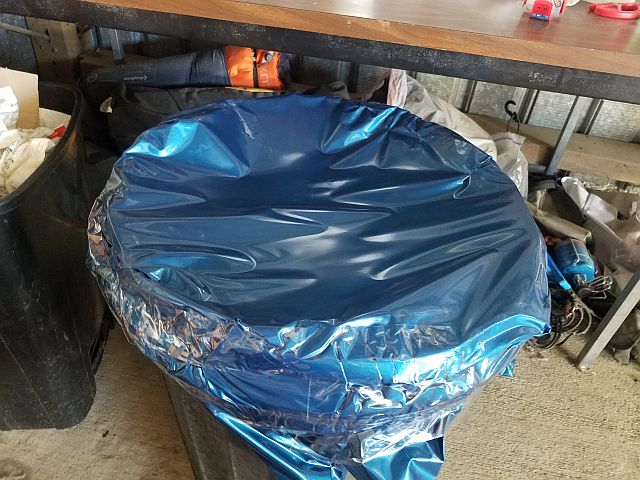 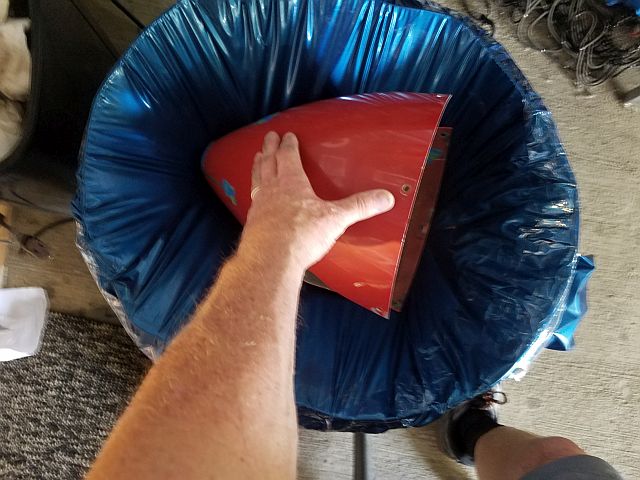 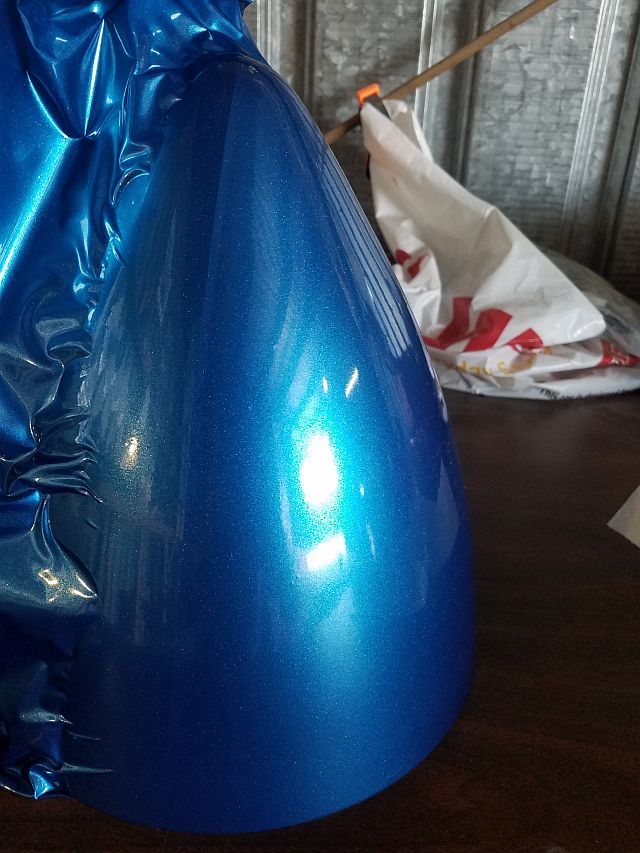 Again, looks great and the pictures really help!  Now that you are a "pro"  :>)  do you think you could have done the spinner in two pieces instead of three - or is that just pushing it too far? (Hmm - is there a pun there somewhere? Haha!)  In the next to last picture, it looks like you covered quite a bit of the spinner.

I would say that it might be possible to do it in two pieces if the spinner was a little smaller than mine (11"). No way i could do my spinner with my vinyl wrap in two pieces.

Also, the type of vinyl used might make it easier. Perhaps Vivid ir one of the other mfgrs. might be more flexible, but i dont know for sure.

One final pic - with Willie 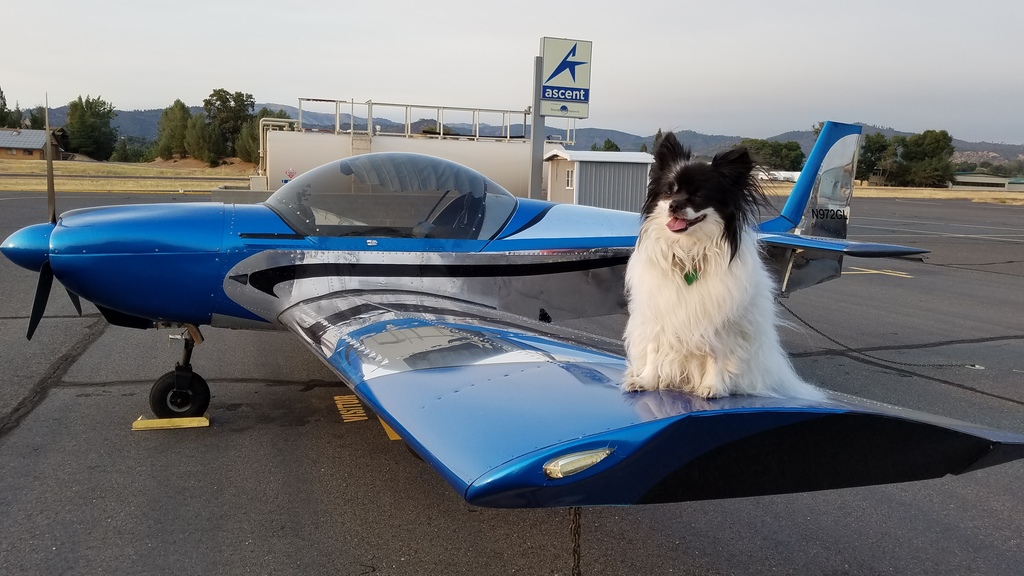 Willie looks quite pleased with the job and ready for a ride!  :>)