Well, January has not been good for flying. The Harmattan (when dust from the Sahara desert blows down over sub-Saharan West Africa) has been unkind. The dust in the air is so thick that you can taste it in every mouthful. Visibility below 3km for most of the month so far and only a couple of flyable days some days visibility down to hundreds of meters. Not good for operations but when you cannot see the mountain at the end of the runway.... it is best to consider that as a day when it is 'Better to be down here wishing you were up there', as opposed to being 'up there wishing you were down here'!!!

Matthew has taken advantage of the non-flying to work on the runway and line markings, normally the field is lush green and needs mowing at least once a week, but now it is crisp underfoot and oxide red-brown since we have had no rain for more than 8 weeks and temperatures over 40C (100F). It is still another 8 weeks to the start of the next rains... food supply is getting short for some of our neighbors..

The bush fires have added some excitement - one nearly burning down the farm and workshops had it not been for Matthew's active work on using agricultural backpacks as fire fighting equipment. The fires have been so strong that they had crossed fire breaks in seconds, boosted by the strong northerly winds.

At the airfield site our preventative burn in December has paid off but we have had other threats than fire when some nomadic cattle drivers cut some fences in order to bring their cows (Zebu actually) onto the well kept land of the airfield... The police are pretty good and through our network of Law enforcement, friendly contact with the local Fulani herdsmen and inter-community work we appear to have got the message across that cows and airplanes really don't mix - AGAIN.

The pictures of the airfield below show how beautiful it is here in West Africa - the brown one shows the airfield during Harmattan after bush fires, the green one what it is like in the month of June and Krobo mountain off the end of threshold 01... ..

Why not come out as a volunteer or support Medicine on the Move (MoM)? 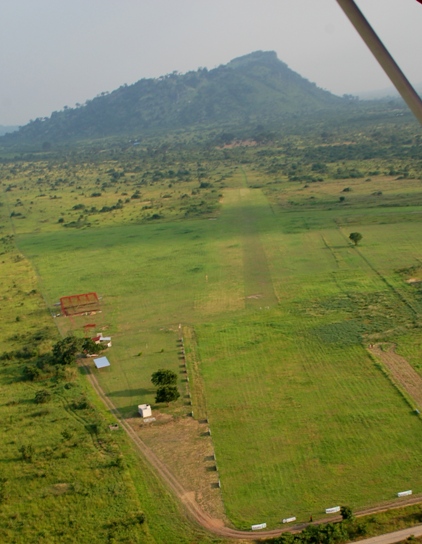