I met with the folks at Sensenich who are just up the road from me here in Florida (I like doing business locally where possible). Their website actually recommends the 68" with a 912S. However, after thinking hard about it, I decided to stick with a 72". Mathematically, a bigger prop will give you more static thrust per horsepower, and with hot humid Florida days and a 600 ft private strip, I didn't want to sacrifice one bit of short field performance. Also, I really like the braking effect of a larger prop at a lower pitch. Really helps with getting the touch down right where you wanted.

I am conscious of the fact that the 68" would have given me a couple more inches of ground clearance, but, I haven't had any issues to date with a 72". I tend not to land on really rough stuff - mainly fields, and dirt roads, and the occasional beach (if nobody is looking). I also know I might have seen a few more knots at cruise - but honestly, if you want to get there fast, rent a Bonanza or fly commercial!

So, I went with the 72", using the super pin indexing system Sensenich provides. I set it first to the 2nd finest pitch available, and then to the finest, and did a test flight each time. Well, in short, a huge disappointment - the prop was nice and quiet, and take off performance wasn't bad, but I was clearly over-propped. Could not get more than 4800 RPM WOT straight and level, even using the finest pitch setting!

The good folks at Sensenich offered to swap out my blades for 68" at no charge (very decent of them given they would not be able to sell the 72" as new). But they also suggested first trying the 72" set to a finer pitch using a conventional digital level rather than the pins.

I'm glad they made this suggestion; a bit of math and a spreadsheet later, I concluded I wanted about 11.5 degrees of pitch to get red-line RPM at best climb speed. Just for interest, I measured the pitch on the old Warp Drive (which had been set by someone else) - wouldn't you know it - 11.5 degrees.

So, I set it to 11.5, and it's perfect. Quiet, spools up almost instantaneously on take off or whenever you add power, reasonable braking effect. And, it looks just perfect (nice of Sensenich to make them in red and white to match N2701D...!). I think Sensenich agreed because they put it on the cover of their new brochure. Pics below. 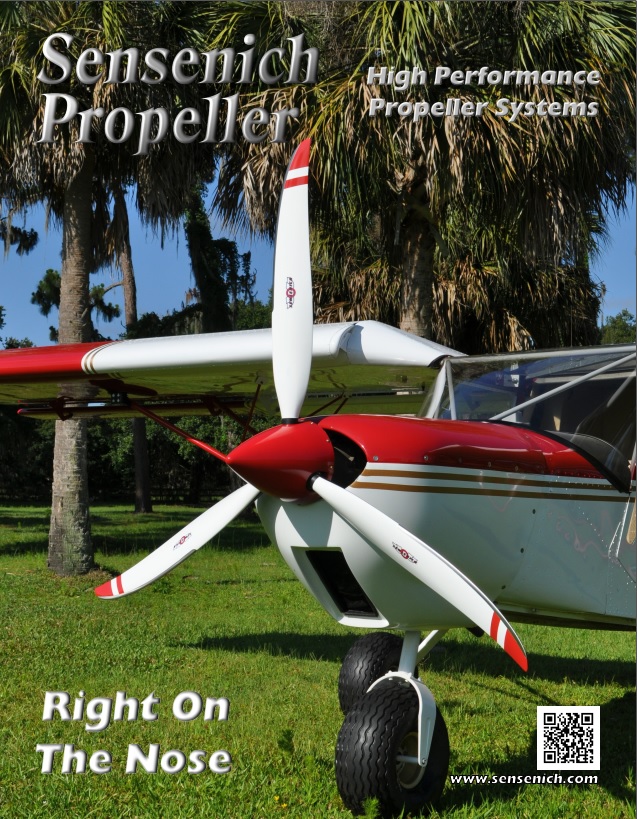 Comment by Sebastian Dewhurst on September 7, 2016 at 2:17pm
Hi Rusty. I don't have hard data but it feels a bit better on take off distance and climb, and about the same on cruise. It is definitely quieter (this from my wife on the ground). Durability? Hard to say this early on, but I have to believe that the metal leading edges will prevent what happened to my Warp Drive, which was getting pretty battered and had eroded tips.

Comment by Rusty Johnson on September 7, 2016 at 12:27am
How is your performance between the two prop's when it comes to top cruise speed, rate of climb, and short field take off distance? How durable is it compared to the Warp Drive? And have you got at least comparable performance for rough field operations with a little more clearance? Because I plan on doing a little outback rough field flying myself.
Thanks, Rusty