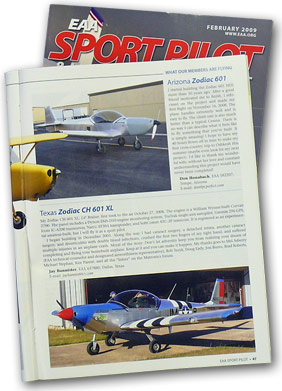 The top photo is of Don Honabach's Zodiac project. Don states: "There is no way I can describe what if feels like to fly something that you've built. It is simply amazing! The plane handles extremely well and is easy to fly..."
Don started his project more than 10 years ago but only recently became re-motivated to complete it: "I'd like to thank my wonderful wife; without her love and constant understanding this project would have never been completed!"


The bottom photo shows Jay Bannister's Zodiac XL: Jay tells fellow builders: "Don't let adversity keep you from realizing your dream of completing and flying your homebuilt airplane. Keep at it and you can make it happen."

Just think, these are just two builders (out of thousands out there) that happened to appear together in the current issue of Sport Pilot. I encourage all of you to share your stories, and to inspire each other (and me!). Thanks!

Photos (and stories) of completed aircraft are a real inspiration to all those who are still building (or just dreaming)...  Please share your success with others by telling your story:

Kitplanes magazine as well as EAA Sport Aviation both want to know about your completed projects - I've heard that the "builder completions" section of their magazines are the single most popular columns in the magazines. Here's how to share your photo and/or story: Tim Garrett doesn’t remember a time when he wasn’t interested in aviation.

“My Dad had a career in the Air Force. I was born on an Air Force base,” says the 48-year-old St. Louis resident. “I was always around airplanes.”

Garrett grew up to become an aeronautical engineer. When he was in his 20s he decided to pursue a private pilot’s license.

“I earned my license in 1983,” he recalls. “I flew recreationally, so building my hours was a slow process because I have a day job. It took me a long time just to get 100 hours.”

Around 1987 Garrett began to experience numbness on one side of his body. A doctor diagnosed Multiple Sclerosis (MS), a chronic neurological disease with no cure. He was just 27.

The cause of MS is unknown. Symptoms vary from person to person and in intensity. They can include vision disturbances, loss of balance or coordination, weakness, vertigo, difficulty walking and tingling in the extremities. Sometimes there is difficulty speaking or bowel and bladder problems. The most common symptom is fatigue.

The diagnosis can be devastating, according to Garrett.

“I remember my doctor told me, ‘you are probably going to face disability, you may end up in a wheelchair’,” he says. “The diagnosis and predictions like that lead to depression and there is that fear of losing control of your life and losing your dreams.”

Garrett stopped flying for a few years, then gradually, as he learned to manage the symptoms of the disease, he began to explore the idea of returning to the sky.

That meant jumping through hoops with an FAA medical examiner and Oklahoma City. There were medical tests and lots of paperwork, he says, before he won his special issuance third class medical, and the process is still ongoing.

“I have to do annual updates,” Garrett says. “My neurologist writes a letter that focuses specifically on the symptoms that create issues for pilots, things like vision, weakness and balance. It’s important that your doctor knows the right words to use when it comes to dealing with the FAA.”

In 2000, Copaxone, a new drug to treat MS, came on the market. Garrett’s doctor prescribed it and his quality of life improved.

“Copaxone can be used to slow down the progression of the disease,” he explains. “The drug therapy helps you stay in control of your life and do what you want, including following your dreams.”

For Garrett, the dream was building an airplane of his own. In 2001 he began work on a Zenith Zodiac XL.

“The Zenith Aircraft Co. has been around since the 1970s and that is a long time in the aviation industry,” he says. “They also have their design philosophy on their website which, as an engineer, I can respect.”

He also had a much more practical reason for choosing the Zodiac.

“I wanted a metal airplane because with metal you can just walk away from it when you get tired and that’s important when you have MS,” he says. “With a composite aircraft you can’t just walk away after you have mixed up a pot of glue.”

Garrett started his project with a trip to the Zenith factory in Mexico, Missouri.

“I went to the rudder workshop,” he says. “They teach you how to build a rudder for an airplane. It’s about two days long. They answer all your questions and really help you out. Then I brought that home and the project continued in my basement. I had a table I used to build the sub-assemblies like the wings, then when I finished the components I’d move them out to the garage for storage. For a few months I had two metal wings hanging over my car.”

Eventually the project moved out to a hangar at Creve Coure Airport (IH0).

“My dad, who spent 20 years as an aircraft electrician in the Air Force, helped out. Because of him I have military quality wiring in my airplane. My mom also helped polish the airplane when I flew it around with bare aluminum. She was a little sad when I finally had it painted.”

“After four years, 11 months and two weeks, N360TM made its first flight Nov. 22, 2006, at Creve Coeur Airport,” he wrote. “That flight was the culmination of a lifelong dream to build and fly my own airplane.”

As far as Garrett knows, he is the only person living with MS who has built and is actively flying his own airplane.

“I want to inspire other MS patients,” he says. “My goal has been to travel around the country and do programs where I talk to people about MS. In October I did a program in the hangar at First Class Air at Capital Airport in Springfield, Illinois, where I had the airplane with me. I could point to it and show them this is what I did, don’t give up your dreams.”

Garrett also is involved in programs that invite speakers from the medical community to share the latest in information on treatment.

“It’s very important, especially when you are newly diagnosed,” he says. “I can show these people that you don’t have to give up. I have 340 hours now, approximately 70% of that time came after I was diagnosed with MS.”

Comment by Zenith.Aero on February 4, 2009 at 3:37pm
It's great to see that the owners of both planes are members of Zenith.Aero!