Earlier this week we were treated by a two day visit by the FAA's newly created National Kit Evaluation Team (NKET) to evaluate and determine that the STOL CH 750 kit, as produced by Zenith, meets the intent of the "51% rule" and to allow an amateur-builder to register the plane as an "amateur-built - Experimental" aircraft (meeting the "major portion" requirement of Title 14, Code of Federal Regulations part 21, Certification Procedures for Products and Parts, § 21.191(g). Below, Roger holds up the STOL CH 750 main wing spar so the members of the NKET can take a closer look at the assembly: 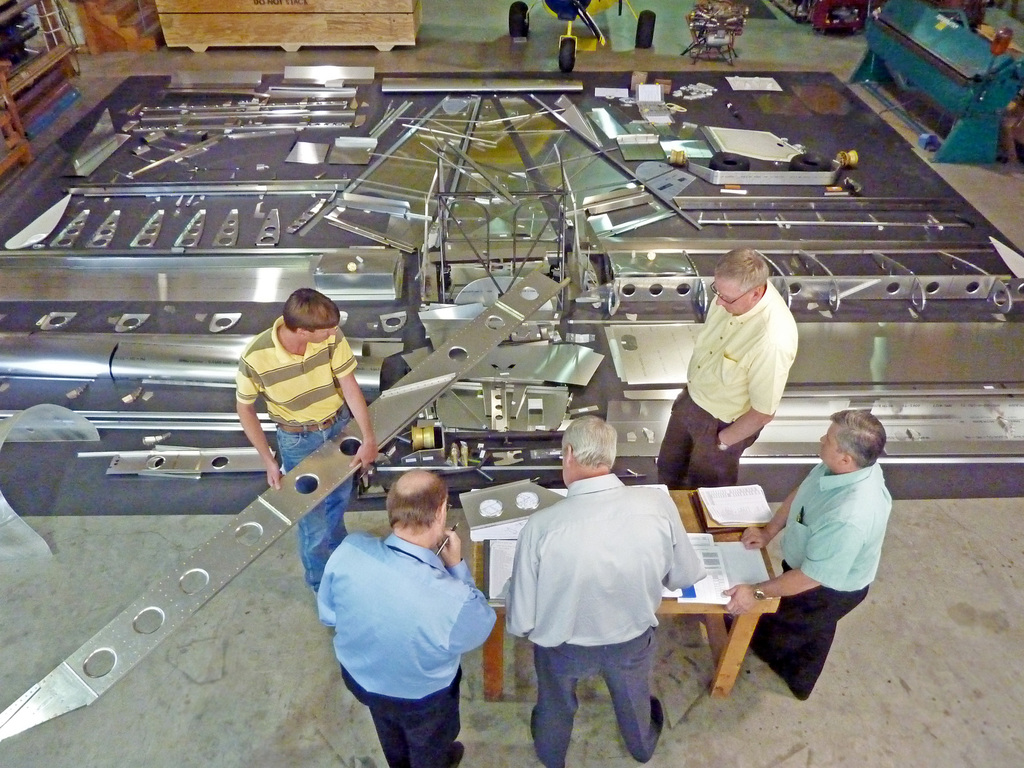 Though the on-site evaluation was a rather slow process with the four-man NKET, we were pleased with the outcome of the evaluation. As expected, it will be several more weeks before the FAA issues its official determination (checklist with a "score") and the STOL CH 750 kit is added to the official "Revised Listing of Amateur-Built Aircraft Kits." Importantly, builders will be able to use this resulting FAA checklist to determine exactly how much commercial / professional builder assistance may be used without violating the “major portion” requirement, or Zenith can also use the checklist to help it decide how much additional pre-fabrication it can perform to the kits. As many of you know, the STOL CH 750 kit makes extensive use of match-drilled pilot holes (CNC pre-drilled skins and parts). While this feature saves the builder countless construction and assembly hours, it still fully meets the "fabrication" requirement since the builder needs to drill through the pilot holes (to final hole size) and then de-burr prior to riveting the assembly together.
We used this occasion to lay out the entire STOL CH 750 kit on the floor for this unique photo opportunity. (We'll be sharing more photos of this layout in the future).

Next up, we'll have the FAA evaluate the CH650 kit...
(Remember, placement of an aircraft kit on this FAA list is not a prerequisite for airworthiness certification, should not be construed as meaning the kit is FAA “certified,” “certificated,” or “approved.”)

Here's a video clip of the kit evaluation:

Comment by Sebastien Heintz on May 25, 2010 at 1:46pm
It's official. I received the FAA letter stating that the STOL CH 750 kit officially allows an amateur builder to register the plane as an "amateur-built - Experimental" aircraft (meeting the "major portion" requirement of Title 14, Code of Federal Regulations part 21, Certification Procedures for Products and Parts, § 21.191(g).
Details

Comment by Bob McDonald on May 14, 2010 at 6:59am
Great lay out for a picture. It would make a good shop "Poster" for dealers and owners alike.