EAA AirVenture Oshkosh -- Here's a follow-up report of Zenith Aircraft at EAA Oshkosh AirVenture 2017. We had another fantastic year, and had a wonderful time meeting with new and existing Zenith builders and flyers, including a full house at the Zenith / Zenair Builders Banquet on Thursday evening!  Following are photos and videos of our week at Oshkosh:

Flying in to Oshkosh: Roger Dubbert flies the approach in the Zenith CH 650 into Oshkosh AirVenture, landing on the Yellow Dot on runway 36L (flying in from the Zenith factory in Mexico, Missouri, on Saturday, July 22, 2017.  Check out the busy arrival traffic in this unedited video:

(The above video is popular on YouTube, with more than 23,000 views in the first week!)

(Also popular, this video had more than 45,000 views in the first week on Facebook)

The busy Zenith booth at AirVenture in the North Aircraft Display area, extra busy with the introduction of the new Zenith STOL CH 750 Super Duty! At the kit aircraft assembly workshop in the EAA Aeroplane Hangar at AirVenture 2017, learning just how quickly and easily the new Zenith CH 750 fuselage kit is to assemble. The new Zenith CH 750 kit is ready for assembly, with parts supplied final hole size match-drilled for maximum ease of assembly. Timelapse video:

Below, Bill with daughter Sophia cleco the fuselage assembly together. (Sophia soloed earlier this year on her sixteenth birthday! She was also a volunteer on the One Week Wonder Zenith project in 2014) 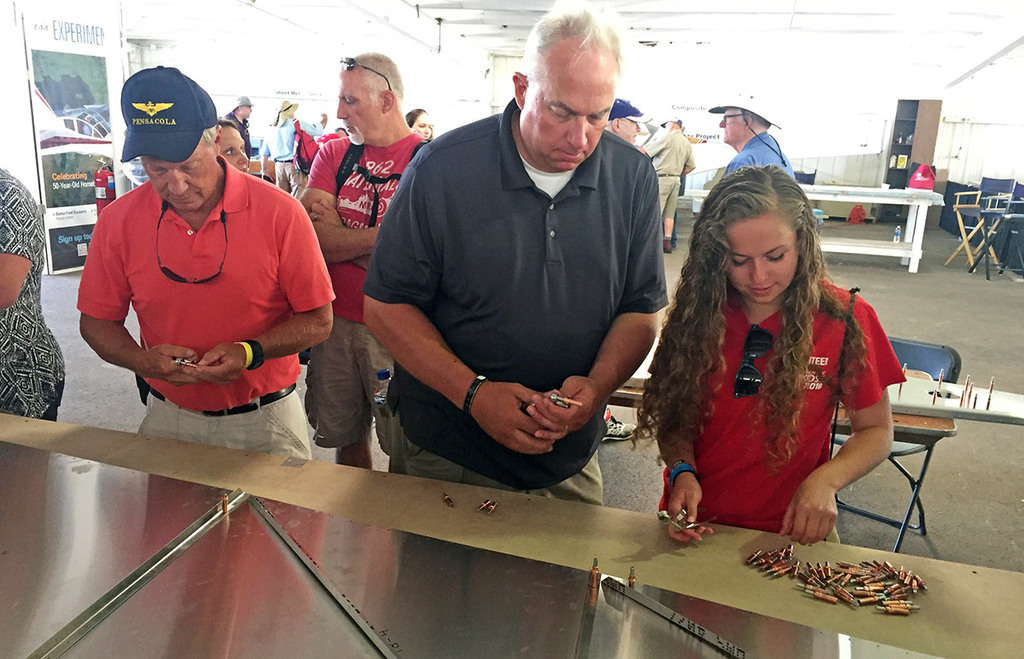 More time-lapse views of the fuselage assemblies: In the Aeroplane Hangar at Oshkosh AirVenture, teaching and demonstrating the simple construction of the new Zenith CH 750 fuselage kit, ready to assemble right out of the box.

Our foreign friends Jonathan Porter and his wife Patricia and their 18-month old daughter Gwen helped work and educate about building and flying.

Two "Give Flight" aircraft were flown in to Oshkosh 2017. Both were Zeniths! This Zenith CH 650 was flown in all the way from Washington State! Built by members of EAA Chapter 84 and the Sno Fly flying club, the wings for this aircraft were built at AirVenture 2015 as part of the "Give Flight" program! Below, the Illinois Aviation Museum's "One Year Wonder" Zenith CH 750 Cruzer, powered by a 100-hp Continental O-200 and built with EAA Chapter 461. The wings for this aircraft were also built as part of the "Give Flight" program.

Based in the Chicago area, the completed Zenith CH 750 Cruzer is owned by the Access Aero flying club, which still has some open positions. If you’re interested in joining, visit www.AccessAero.org or call 331-253-2226. First, the Light Aircraft Manufacturers Association (LAMA) named Heintz the 2017 recipient of the association’s President’s Award (above right), and later in the week EAA CEO and chairman of the board Jack Pelton named Heintz winner of the Freedom of Flight Award: “The Freedom of Flight Award is meant for an individual who has made the general aviation community better through their integrity, innovation, and high standards — and Sebastien Heintz is the embodiment of that ideal,” said Pelton. “He and Zenith Aircraft Company have made building an airplane an even more enjoyable experience for homebuilders everywhere.”

The introduction of the new Zenith STOL CH 750 Super Duty at Oshkosh was a huge success, with great interest in both the new CH 750 "Super Duty" design (with increased gross weight, the addition of a rear jump seat, and more power for amazing STOL performance) as well as the Unpanel concept which dramatically increases both cabin space and visibility.

Above, the Zenith STOL CH 750 Super Duty shortly after sunrise for a flight evaluation and air-to-air photos with Kitplanes magazine. Kitplanes editor Paul Dye gave the ultimate compliment: "We liked it so much, we needed to get more gas to go up for more!" While Oshkosh AirVenture is fantastic for all the airplanes, what makes it a truly great event are the people, especially the many Zenith builders and flyers, both young and old.

The Zenith / Zenair Builders Banquet on Thursday evening was again a relaxing evening with great comaraderie among builders, owners and flyers

The One Week Wonder, the star of the 2014 AirVenture was on display in the EAA Homebuilders Hangar, along with the two Give Flight airplanes:

Below, Roger checks out the One Week Wonder Zenith CH 750 Cruzer. This airplane was built in just seven days at AirVenture 2014 with the participation of more than 2,500 volunteers!

The EAA staff-built Zenith STOL CH 750 was parked outside the brand-new Blue Barn on the EAA grounds. Located across from Forums Plaza adjacent to Aviation Gateway Park, the Blue Barn is the new home of Young Eagles, Eagle Flights, and EAA chapters during the convention 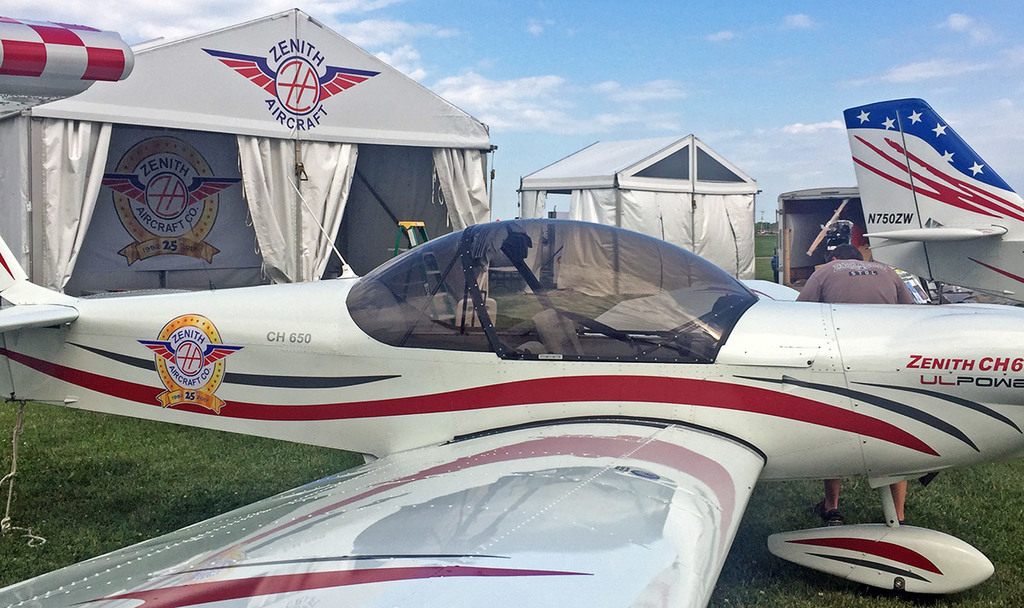 Lots of red, white and blue!

Official STOL FUN ZONE, as designated by the Federal Department of Backcountry Aviation

Great views of the airshow and historic planes: On the last day of the show, three different Zenith models taxiing out on their way home:

Flying home, with a parting view of EAA AirVenture 2017 (as seen from the Zenith CH 750 Cruzer)

A view of the new Zenith STOL CH 750 Super Duty on its way back to the Zenith Aircraft factory: 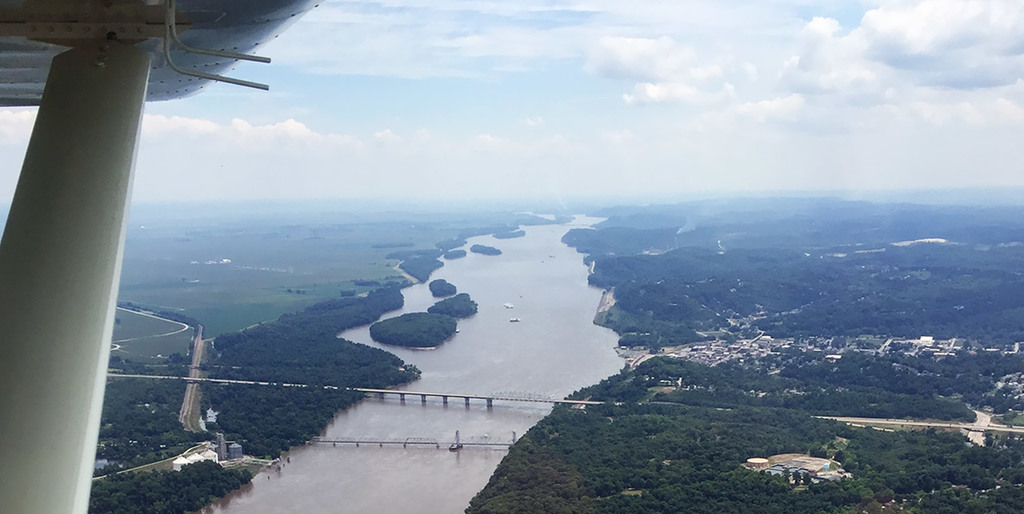 It's good to be home!

Thanks to all who helped make this a great AirVenture 2017!
Feel free to post and share your own photos below in the comments.

Here are a few more photos of the Zenair / Zenith Banquet on Thursday evening from Joe Scheibinger, the organizer of the event. Thanks Joe for all your help! 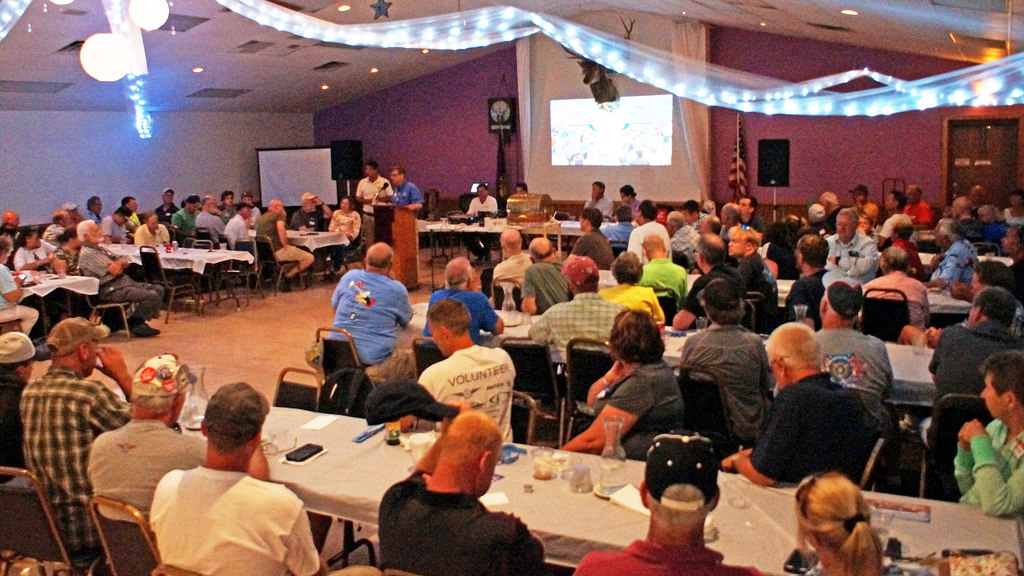 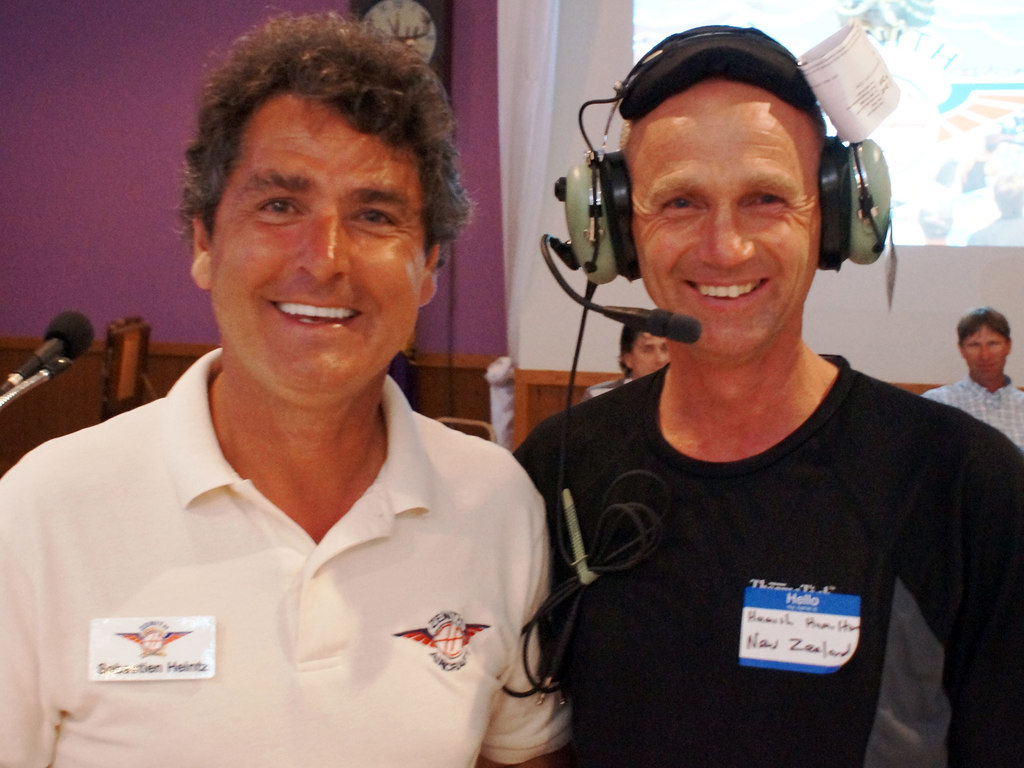 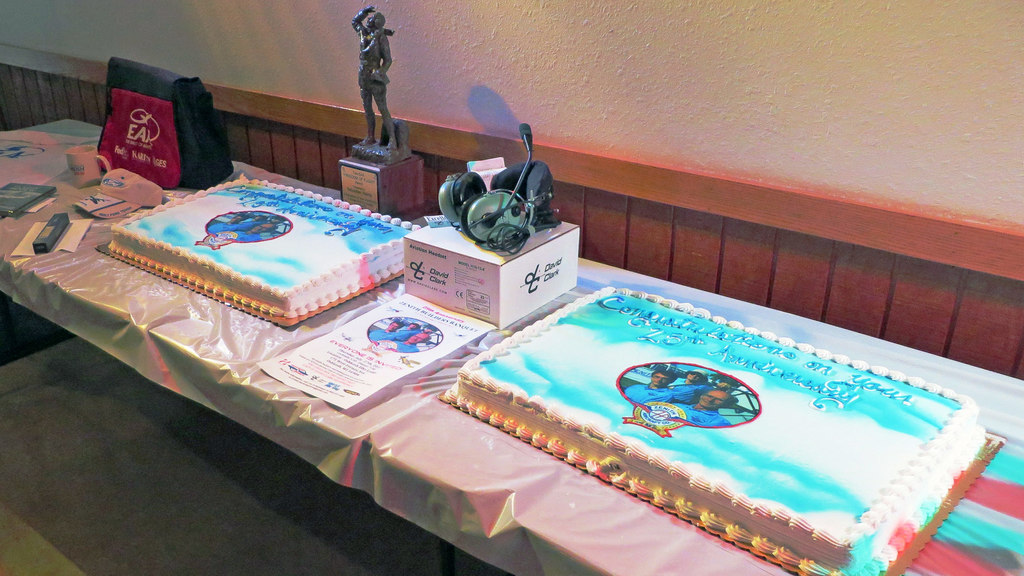 One of the two 25th anniversary cakes: 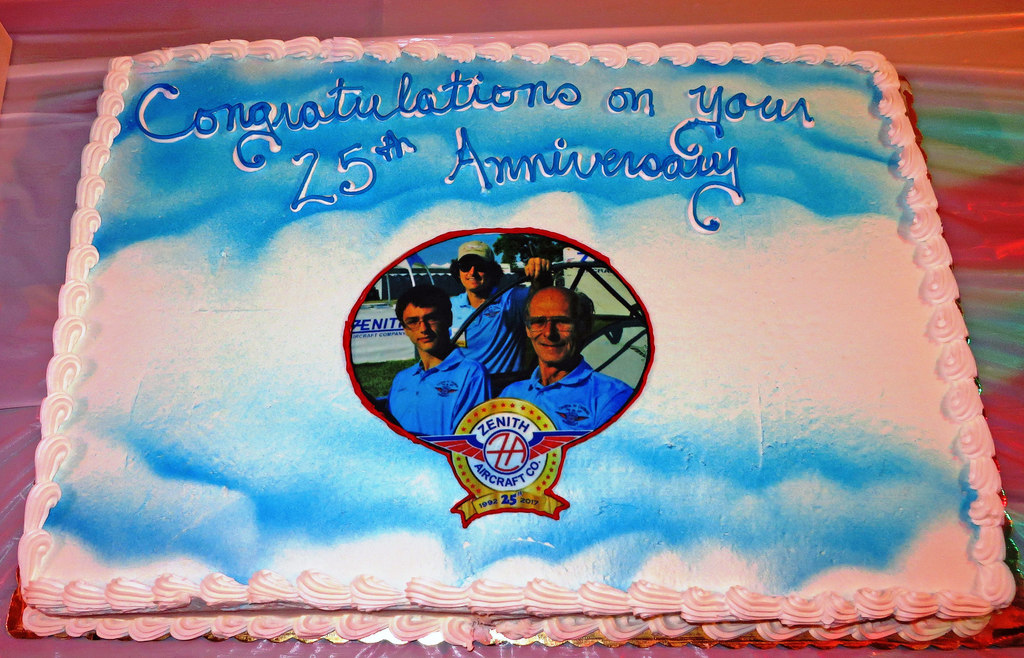 EAA's Charlie Becker with Sebastien Heintz and the Freedom of Flight trophy. EAA's Freedom of Flight Award is the organization's highest honor, bestowed annually to an individual whose contributions to aviation closely mirror the integrity, entrepreneurship, and innovativeness of EAA members. 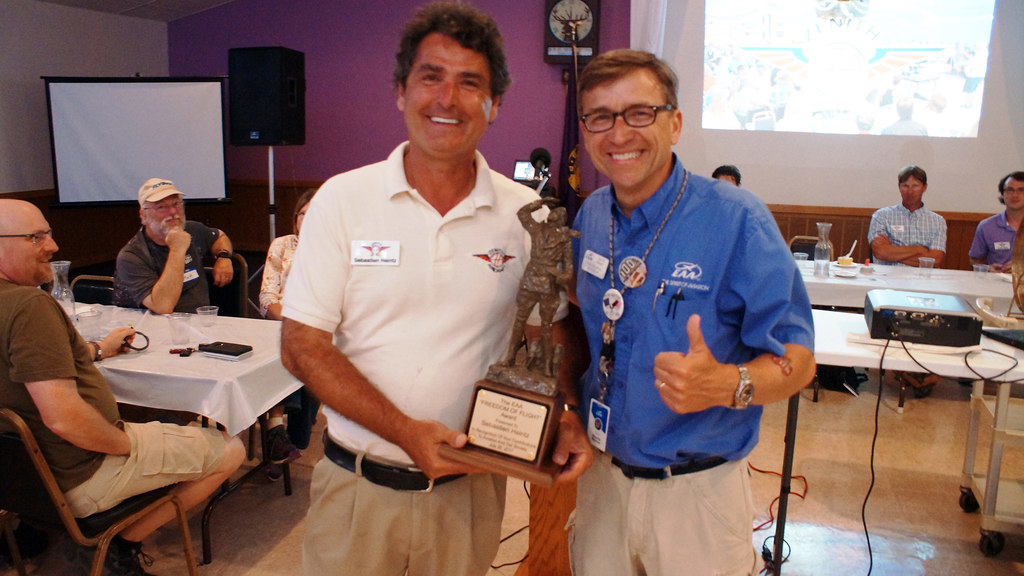 James McGauhey talks about flying the Zenith CH 650 all the way from Washington State for AirVenture! The CH 650 was built by members of EAA Chapter 84 and the Sno Fly flying club: 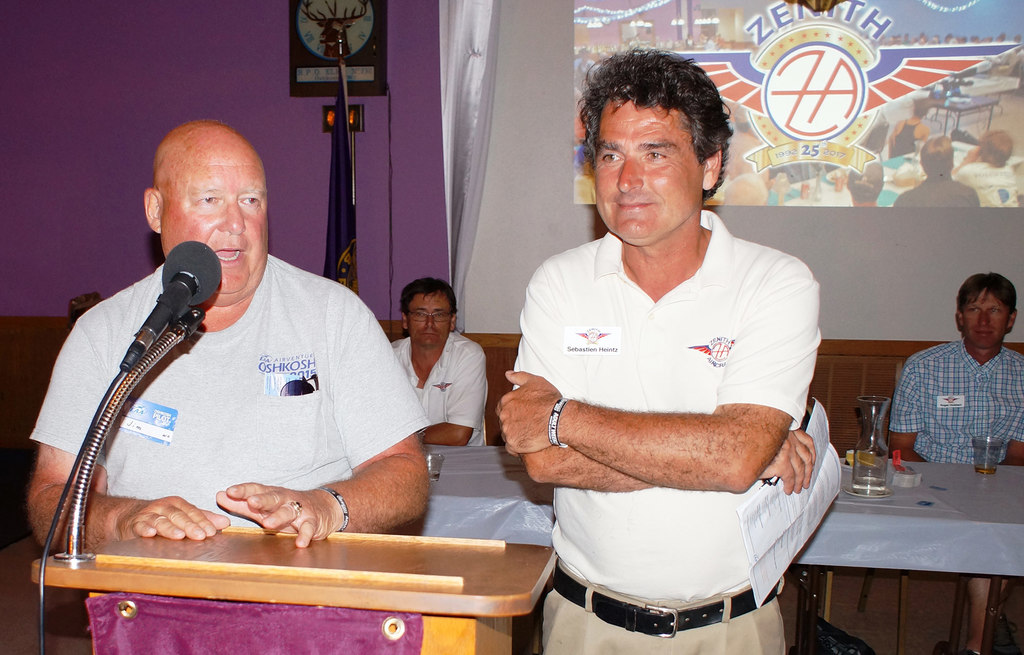 The Oshkosh Elks Lodge thanks all of the Zenith builders and enthusiasts who attended the banquet. Over $1200 was raised from the dinner, bar, and 50/50 raffles and will go to education scholarships and Veterans programs through the Elks Lodge. Landon seated in the Zenith CH 750 Cruzer. Landon spent a couple of days during AirVenture in the Aeroplane Hangar working on the CH 750 fuselage assemblies and learning about building airplanes! 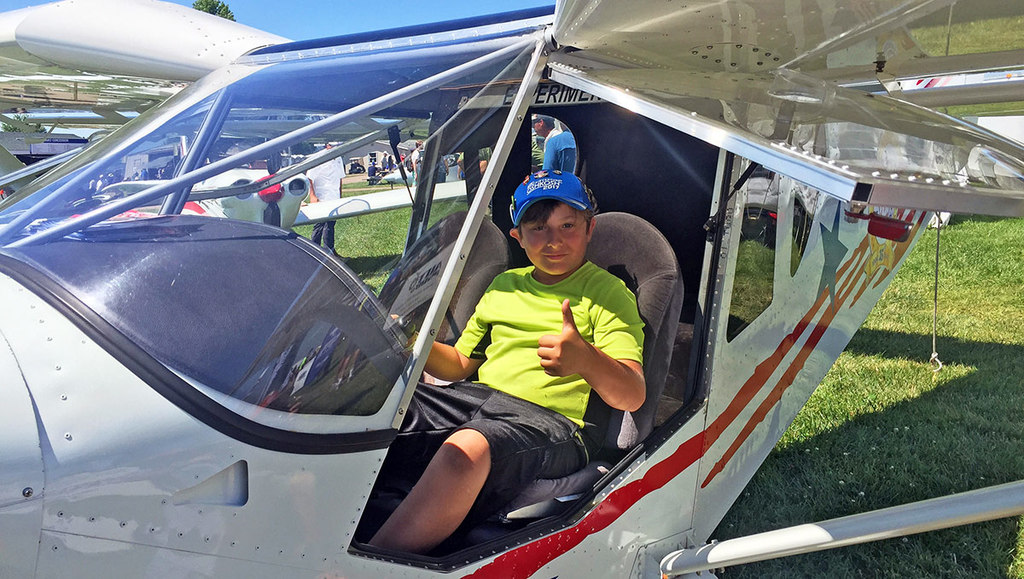 The Super Duty looks amazing!!!  How about you guys put your thinking caps on and design a taildragger version for us tail wheel pilots!!??  Ill be the first in line to purchase one.....just a thought..Kay C