Here's my follow-up report from our 20th annual Open Hangar Day and Builder Fly-In Gathering from this past weekend.  Despite some rain and cool weather that kept some visitors away we had a fantastic time and a great turnout, proving once again that it's about the people and the planes, and not the weather!

Above, Anold Newbury flew in from Wisconsin with his STOL CH 701 to camp with his airplane (and there were several more campers and motorhomes at the airport).

Starting on Friday afternoon we hosted several seminars and workshops with programs of interest to all.  Below, Corvair engine guru William Wynne talks about successful Corvair auto conversion installations.

For the first time, we held a seminar on Weight & Balance, with Mike Pruett of Scales4Planes.com and Caleb Gebhardt of the Zenith factory, using the STOL CH 701 as the subject plane: 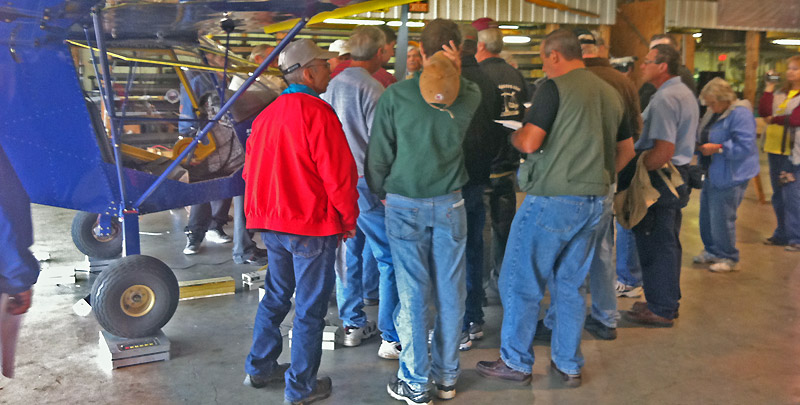 Zenith builder/owner Mark Stauffer of Jabiru USA flew in from Tennessee to share information about Jabiru engines as installed on the Zenith STOL CH 750:

The Zenith Builders Banquet on Friday evening was a great social gathering with more than 170 Zenith builders, pilots and employees (and their spouse and friends).  Charlie Becker from EAA provided a follow up report on AirVenture and an update from EAA:

Many door prized were awarded and STOL CH 750 builder Scott Tandy of Claremore, Oklahoma, was the grand prize winner of the Garmin Aera 510 GPS system (valued at $1,200) at the Zenith Builders Banquet. Scott will share the prize with his father Terry:

Saturday's Open Hangar Day saw a hive of activity in the factory with demonstrations, factory tours, and more:

Below, EAA's director of member programs, Charlie Becker, explains about EAA's available resources to help builders, owners and pilots of amateur-built (kit) aircraft, including the technical adviser and flight adviser programs from EAA, as well as details on Sport Pilot / LSA rules.

Despite clouds and occasional showers, we were busy flying all day, and a handful of Zeniths made it in for the Open Hangar Day.  [I missed the opportunity of taking photos of the planes that flew in - email me your photos or post them on Zenith.Aero]

Viking Aircraft's Jan Eggenfellner flew in from Florida in his CH 601 powered by the 110-hp Honda-based auto conversion:

Buzz and Aumie Devoll of Buzz Air Flight Academy of Carson City, Nevada, attended (with their little dogs) to share information about Sport Pilot flight and transition training in Zeniths:

In the shop, visitors were kept busy building and assembling their own aluminum 3-ring binder:

Thanks again to all who participated and helped make this a fun and educational event.
We're already looking forward to planning next year's event!

Below:  Once again we held a "rudder factory workshop" immediately before the Open Hangar Day.  We had a full shop of new rudders being built: six STOL CH 750 / 701, four new CH 650 rudders and two STOL CH 801 rudders:

I had a great time...Thank you Sebastian and the Zenith Team for a great weekend!

Matt and I had a Stupendous time at the Builder's workshop!

Jocye and Shirley, Hello from Skiatook, Oklahoma. We had so much fun building the rudder of the 650! Thanks to Roger too for letting me use your desk and computer to do my accounting homework! I can't wait til we can start the Tail piece of the plane! I totally LOVED getting to go for the demo ride!  We enjoyed meeting Julie and Brian and look forward to seeing their progress with their plane.  We are looking forward to Hanger Day next year!

Comment by Wendell Ridenour on September 21, 2011 at 3:38pm
Sorry I could not make it . we were flying the young eagles that day

First time in both Mexico and Mo.-Great event! Congrats to Sebastian and staff for all the work and bringing on a relevant group of vendors.We want to thank you all---tell Joyce the place is called DOS ARCOS- great place-she will know.

Comment by Dale Medendorp on September 20, 2011 at 1:06pm
Thank you Sebastian, and all the other members of the Zenith Factory Family, for a wonderful time, and for letting us camp in your parking lot! I only wish there had been a 601 or 650 taildragger there ;)

For another great event.

Looks awesome, one day I'll make it to one of these!

Thanks Zenith for a terrific project to build and fly.

Comment by Michael McConnell on September 19, 2011 at 6:27pm
Wish I could have been there!  Maybe next year.

Comment by Peter Thomson on September 19, 2011 at 6:17pm
Looks a great day, Sebastian, thanks for the report !