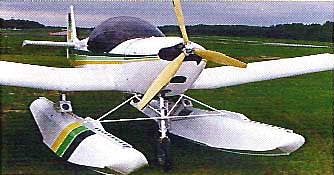 I'm bored these days without a project, so I'm thinking my CH601HD would be cool to fly on floats. Anyone have a drawing for the front steerable nose gear. If I remember these were compressed air…

Thank you for your concern... I am alive and still kicking :>)
I kind of stepped away from all my normal activities (except work) last October when my father "Robert Bruce McDonald" was diagnosed with ALS (Lou Gerhig's) disease.
At 85 yrs. the progression of this disease was very rapid. He was unable to walk after Jan.2014, and almost totally paralyzed and unable to speak by May 2014. He passed away June 07, 2014 aged 86 yrs.
His only request was to stay…
Continue

I know the owner and aircraft history. Its good.

First flight of Mac McCullock's CH750 registered AULA in Canada. Rotax 912S engine. Mac did a days CH750 type training with me prior to 1st flight.

When you order Zenith amphibian floats you have to chose between operating your retractable wheels either by a hand pump or electric pump. Zenith does not price either pump differently...but if you want a hand pump to back up the electric version its an additional $1000. The hand pump must be mounted between the pilots legs so it can be operated by the pilot. The electric pump can be mounted in the rear and operated with a single switch. Both pumps weigh the same. Do any of the builders have… Continue

I think most builders have at least one slow leak tire on their aircraft. On mine its the nose gear tire, it leaks down over a couple weeks while the mains have never leaked. I was thinking about putting tubes in the tires, but that adds extra cost and weight (I assume that is why tubes are not included in the kit?). A fellow builder Bob Stuart (CH701 plans only) suggested removing the valve stem and injecting (syringe) 5 - 10 cc of anti-freeze then installing the stem and inflating the…

I have gas caps that leak when I go flying. This is evident by the fuel streaks down the top of wings from the filler necks after I land. I suspect this is from the position of the filler neck & fuel caps is steep turns. High wing tank leaks in a turn. I also noticed that the right fuel tank level was always higher than the left after going flying.

The tanks would start out level if left in the hangar over night. I went to dip the tanks after flying and heard a "whoosh" upon…

Remember the CH750 kit owned by Angus Watt from Ottawa, the one I spent 8 days working on last month? Well, at the end of 4 weeks it looks like this... by the end of this day the wings and all flying surfaces are final fitted and it is once again dis-assembled and shipped to the paint shop today.
The CH801 (Yellow/Blue?White paint)in the back ground is a 4 seat model built for an outpost camp in Alberta.

Well... Yesterday I started into job on the CH601HD that is very much like force feeding a Porcupine to a Grizzly Bear ! I used an ATV jack to lift The Zen, there is no weight the wings... its a "Plan B" thing. Grantley Este & Bob "Mr. GoodWrench" Braden pitched in to get me started on the job I have been putting off for a year now. Changing the out of date main gear bungee (5 yr replacement cycle), so far it has taken 3 guys the better part of a day to jack up the aircraft and get the gear… Continue