For us, the trip itself is usually the highlight of attending these shows, and the trip allows us to spend quality time flying the planes that we spend our days building, and allows us to experience first-hand the cross-country capability of our fun light airplanes. (To this day I'm still surprised by the number of light plane manufacturers who trailer their planes cross country instead of flying them!)

Flying There:
We departed Monday morning bright and early from the factory in Mexico, Missouri. It was 0 degrees Fahrenheit (-18 degrees C) out that morning, but it was also sunny and with a good tailwind. We flew two planes to the show, the STOL CH 750 and the CH 750 Cruzer, and made it all the way to northern Florida in one day (with fuel and food stops in Muscle Shoals. AL and Eufala, AL along the way). That's more than 800 miles, not bad for winter daylight hours! Above: Bundled up over cold Missouri in the CH 750 Cruzer. While the cabin heater works well, I was happy for my hat and gloves, and blanket on my lap.

Above and below: The meandering Mississippi River in the Missouri boot heel (southeast corner). Cold but without snow on the ground.

Flying high (between 5,000 and 6,500 feet) to take advantage of the tailwind. I stayed together with Roger in the STOL CH 750 most of the time, throttled right back in the CH 750 Cruzer:

Normally, we fly "low and slow" (500 to 1,500 feet above ground) but with tailwinds we climbed up to take advantage of the wind and surprisingly smooth flying.
Below, flying high over Birmingham, Alabama. 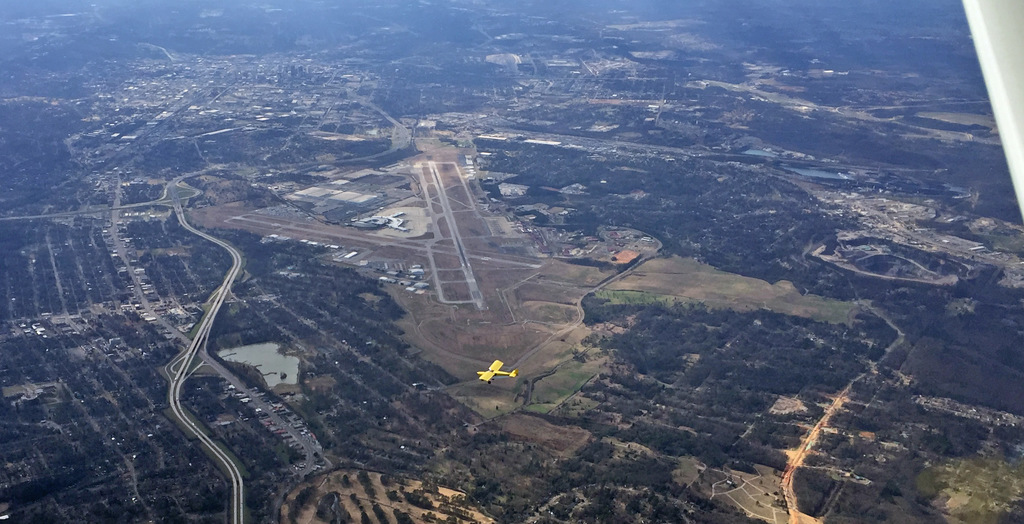 We made it all the way to Perry-Foley (40J) the first day, overnighting in Perry, Florida.
The next morning we had to defrost the planes in the morning sunlight (by dropping the tails and letting the sun work its magic):

Flying south along the gulf coast:

We didn't stop at the Cedar Key island airport since it was so cool outside:

We stopped at Crystal River for breakfast and to see the manatees from the air. Here's the video departing Crystal River and flying into Sebring:

Unpacking all of our stuff in Sebring. When flying our planes solo we really don't bother trying to pack light as there is plenty of room and payload for all of our stuff.
(Interesting side note: When leaving Perry-Foley that morning I forgot my small backpack (with my laptop, etc.) in the airport terminal building lobby and didn't realize it until we reached Sebring.  To my pleasant surprise, my backpack arrived in Sebring later that day: another light sport aircraft company pilot (also stopped at Perry-Foley for fuel) flew it down to me after seeing my name on the tag. What a great industry!)

The Expo opened the following morning, where we enjoyed talking about the planes and meeting with new and existing builders: 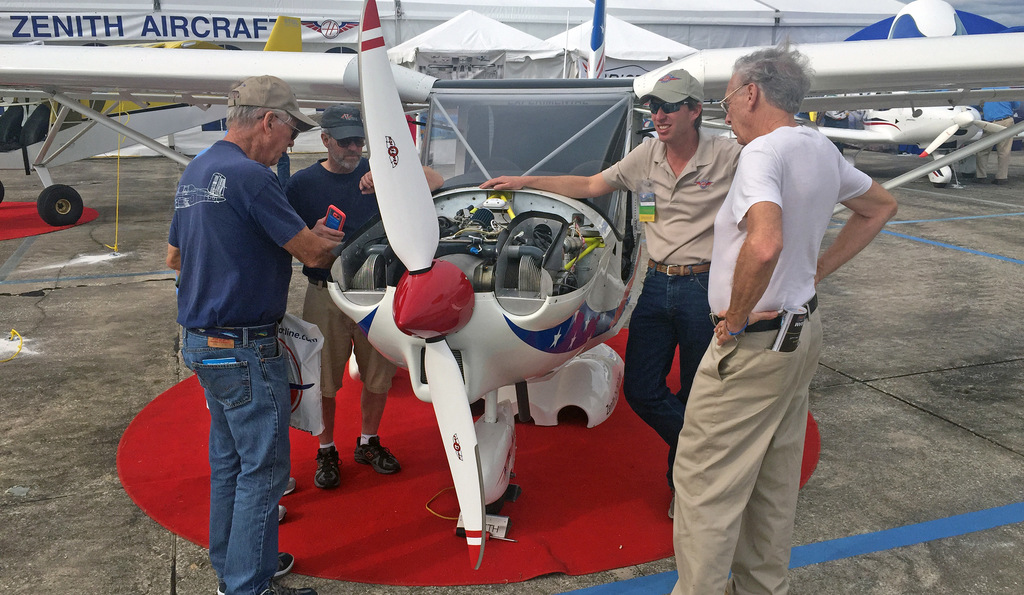 Based on the success of the engine panel discussion at the Zenith Aircraft Open Hangar Day, LAMA had me moderate an engine discussion at the LAMA dinner at Sebring. Below, the panel participants from Rotax, Continental, Jabiru, UL Power, Viking, and E-Flight.

Sebring is a good show for demo flights and Roger was kept busy taking up potential builders flying in the two Zeniths. (Below, posing as a Zenith while the Cruzer was up for a demo flight)

With its relatively low crowds Sebring is also a good show for us to meet with our many suppliers and partners. The weather in Sebring is often cold and windy (at least by Florida standards) and this year was no exception. After a nice two days, Friday's weather became quite threatening and show organizers shut down the show for the day due to a forecasted heavy storm (and potential tornado) that never materialized and the last day of the show was cold and extremely windy (with gusts on the grounds over 45 mph). We were happy to sneak our planes under cover during the impending storm: 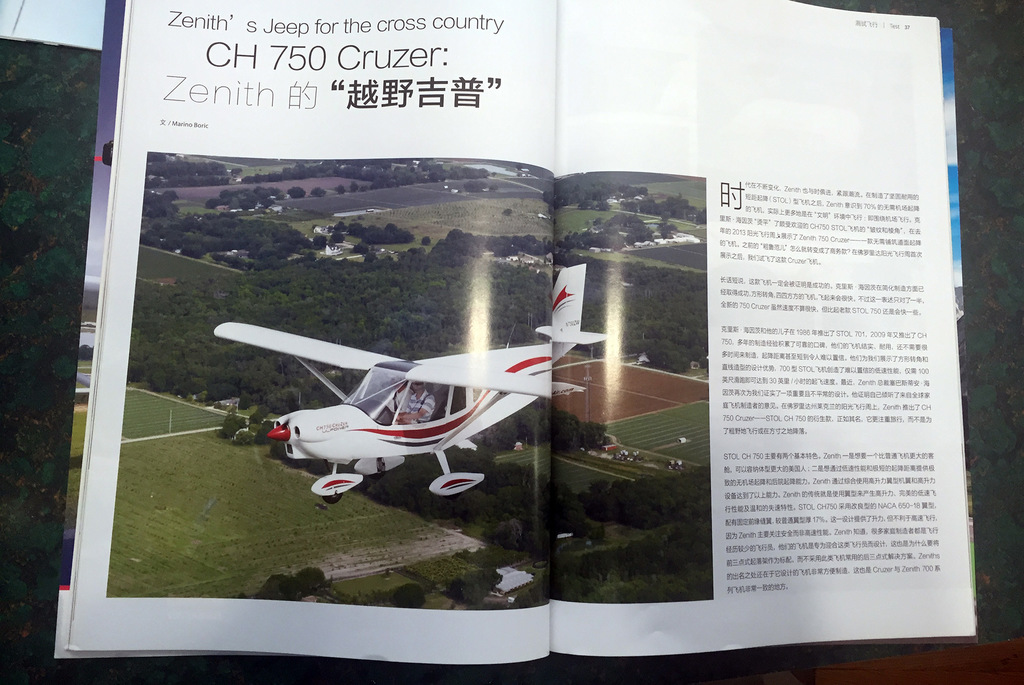 At the EAA booth, Pat Hoyt and his Zenith CH 650 are prominently featured on the EAA Insurance /Finance poster: 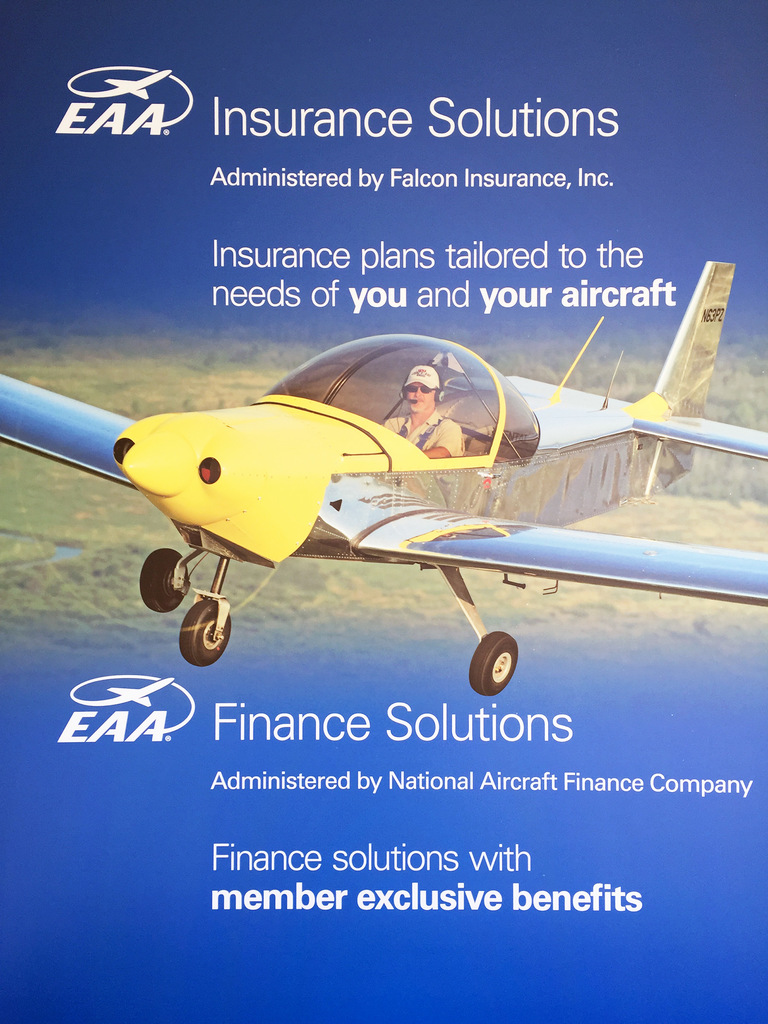 At Sebring, Roger and I were joined by my brother Matt from Zenair (in Canada), who attended to promote the "Two Week Wonder" advanced builder assistance program as well as Zenair Floats and Full Lotus Floats.

Right before the show we also announced the purchase of the assets of SAM Aircraft assets, and we were busy the rest of the week answering questions from the press about the SAM Aircraft and our plans. 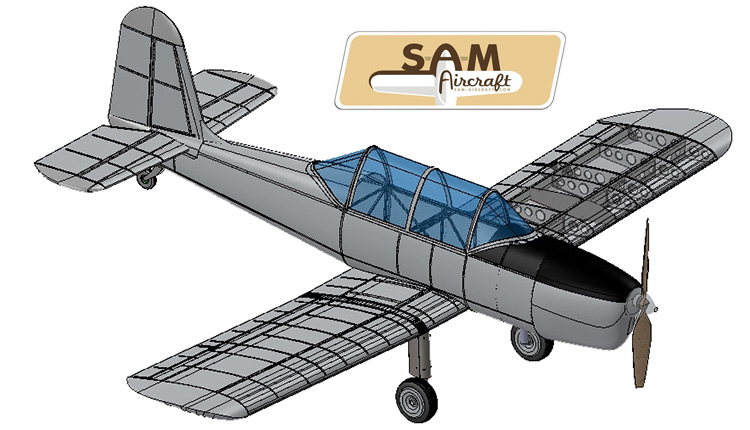 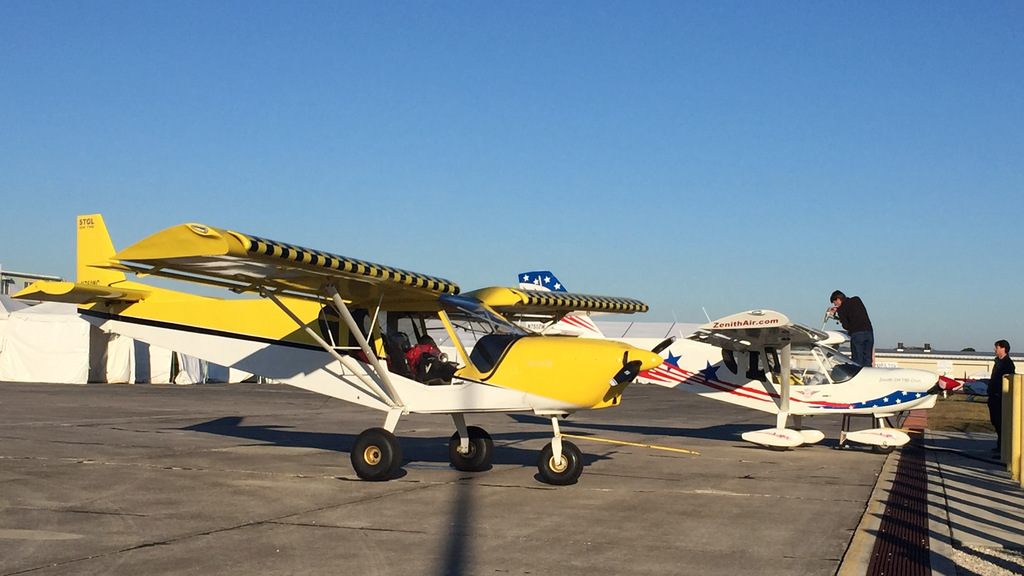 One again, we were blessed with tail winds once we made it to northern Florida. Below, a central Alabama lake: 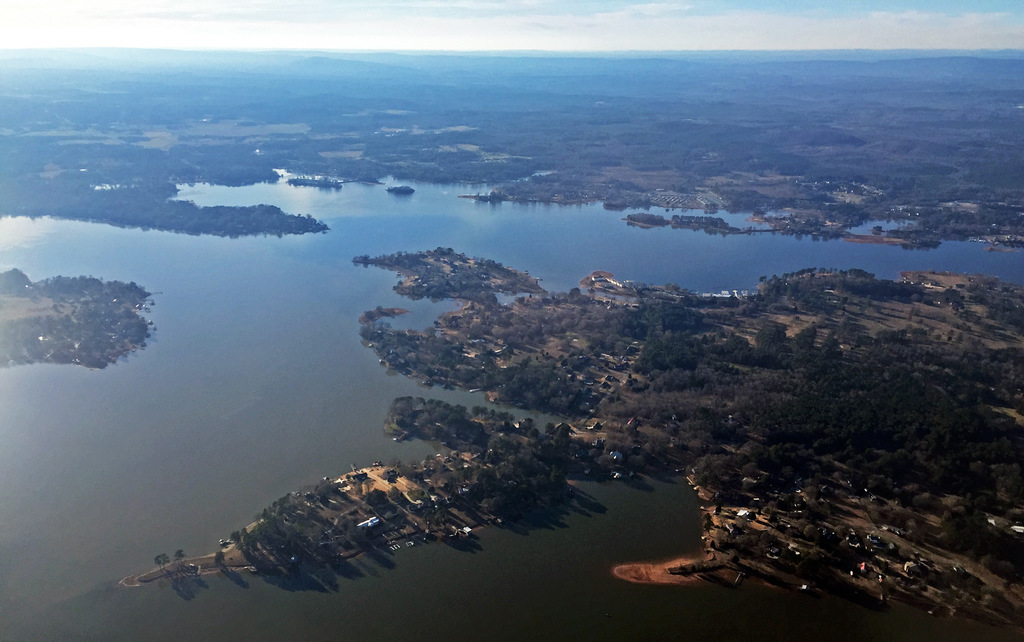 We overnighted in Muscle Shoals, Alabama and headed north first thing in the morning, with colder weather as we progressed northward: Crossing the cold Mississippi River on our way back, this time with snow on the ground:
Notice I'm wearing a hoodie in these videos to keep warm. While it was cool, I didn't even need to wear gloves for the flight home :)

We made it back to the Zenith factory in Mexico, Missouri, by noon (before lower ceilings and gusty conditions moved in).

We had a good flight both ways and enjoyed the opportunity to spend more time in our airplanes (1,000+ miles each way), and to meet with both existing and new Zenith customers!  We'll be heading back out that way in a couple of months. 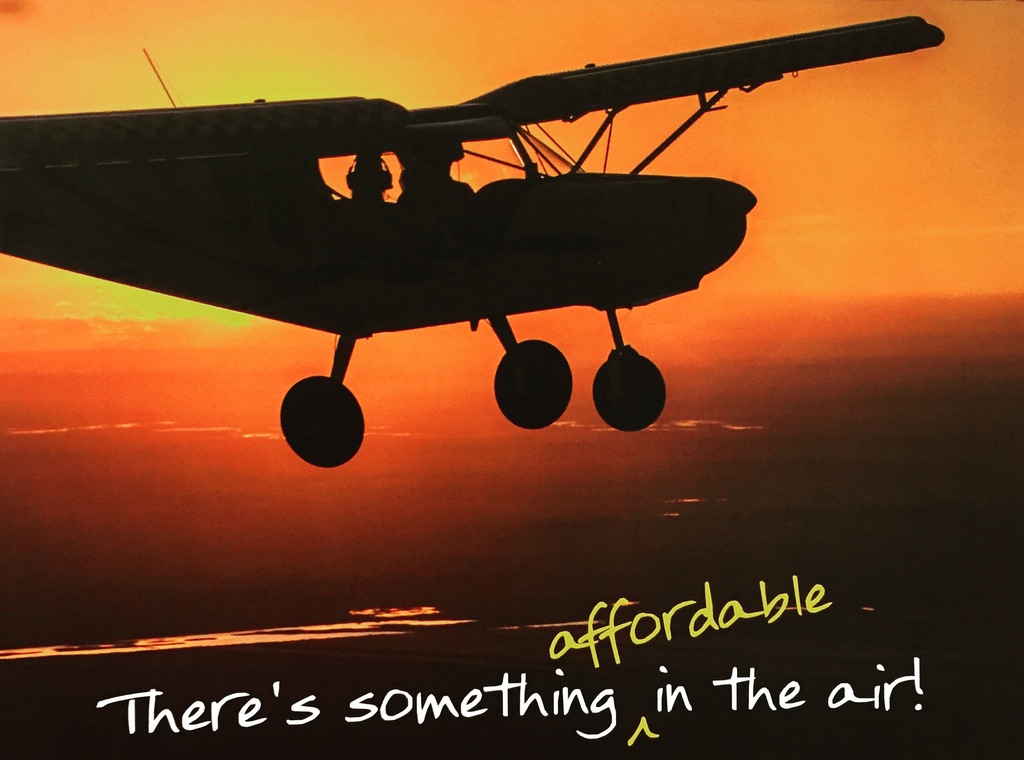 Nice report of the trip guys, I am jealous!

You didn't mention the mileage of the trip?  Nice, this is the stuff that will keep the dreams of flying going!  I flew my 701 from NC to Zapata TX in two days, 1800 kn mi.  It may be slow but it is still a lot of fun.

Comment by Gary Motley on January 27, 2016 at 7:59pm
Will these planes simply rest on the tail without other support in the front or tail tie down?

Enjoyed reading all about it. I wish I could have made it. At least I have a Cruzer here that I can continue to work on.

Thanks for your time put into making these reports - inspires us further, to keep on building.

Comment by Lawrence Michael Wilson on January 27, 2016 at 6:29pm
Thanks for sharing. No snow here in sunny northern Thailand. As always very well done.

Comment by Chris M. Brammer, Jr. on January 27, 2016 at 6:12pm
Looks and sounds like you had a great flight and time in Sebring. Enjoyed the pictures and video.