Since the devastation of Hurricane Florence last month in the Carolinas, I had heard several reports of a STOL CH 801 being used to fly in supplies to flooded areas in the aftermath of the hurricane.

Here is a brief report and photos: 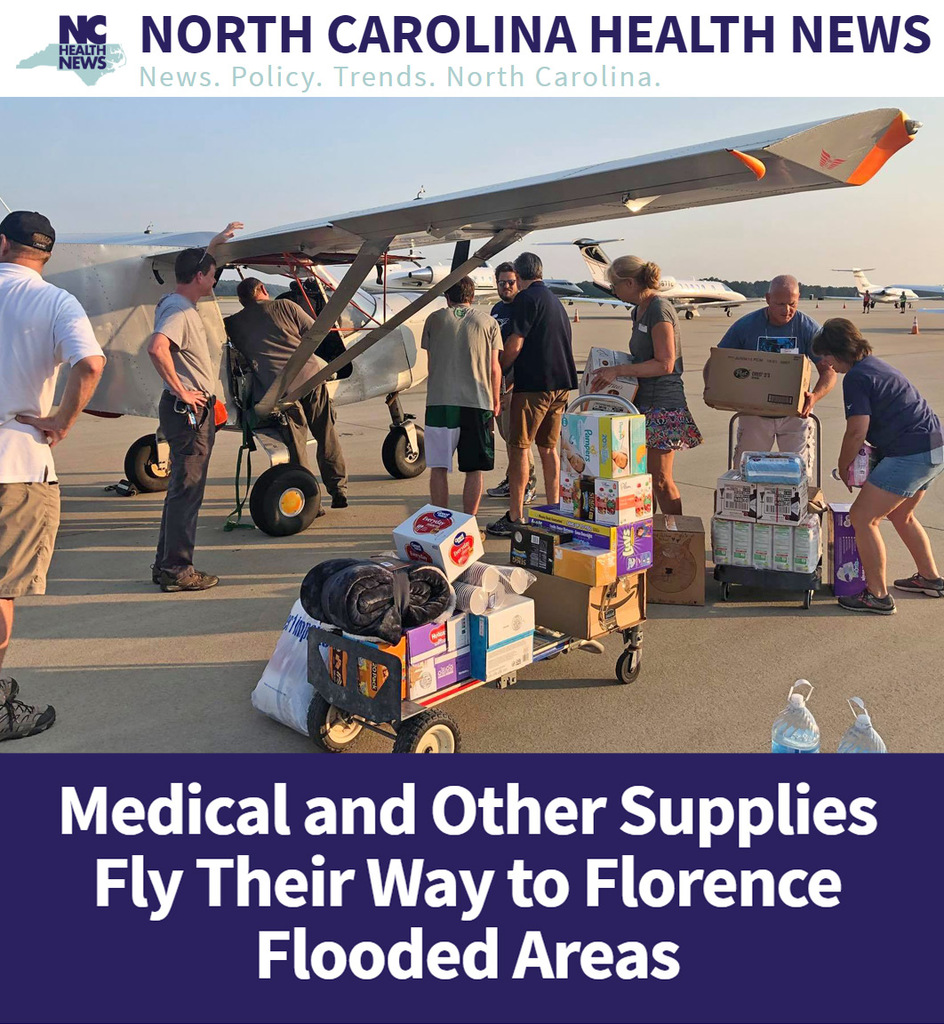 I first read about it when I was forwarded a link to the above article:

"65-year-old pilot Sam McNair built his Zenith 801 from a kit and has flown the plane all over the United States, including Alaska. McNair has been volunteering to ferry supplies to flooded areas on the North Carolina coast this week for Operation Airdrop."

Here are a few photos from the article: "Rachel Patterson, Michael Kim, Jay Lang and Michael Taylor puzzle out how to fit a payload into Sam McNair's Zenith 801 plan for a flight down to the coast. Photo credit: Steve Tell" 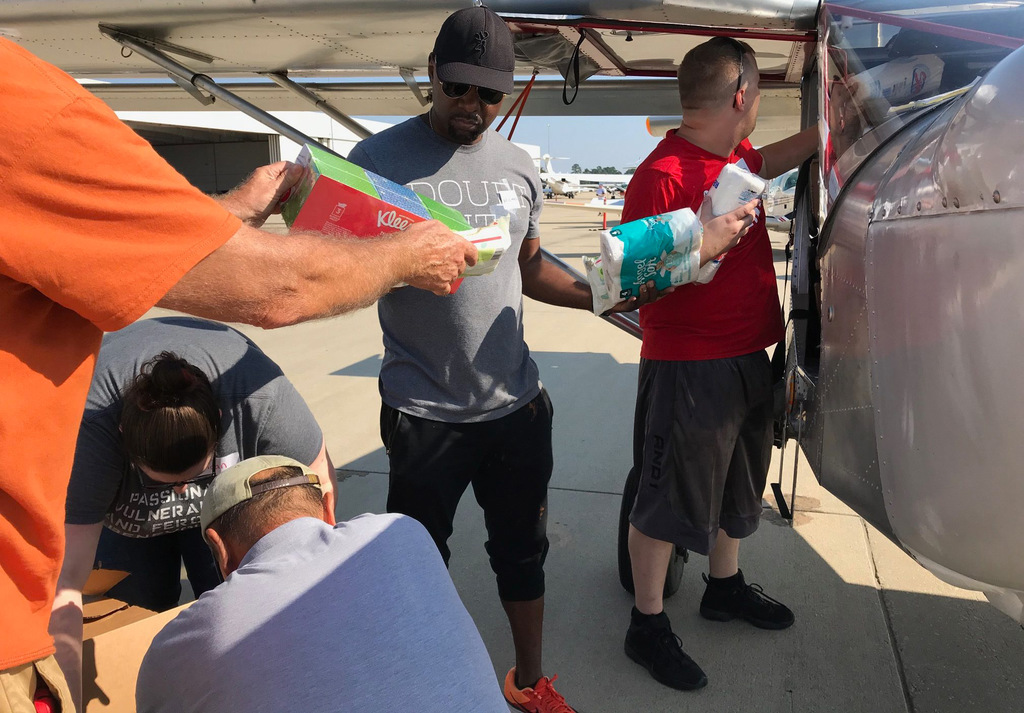 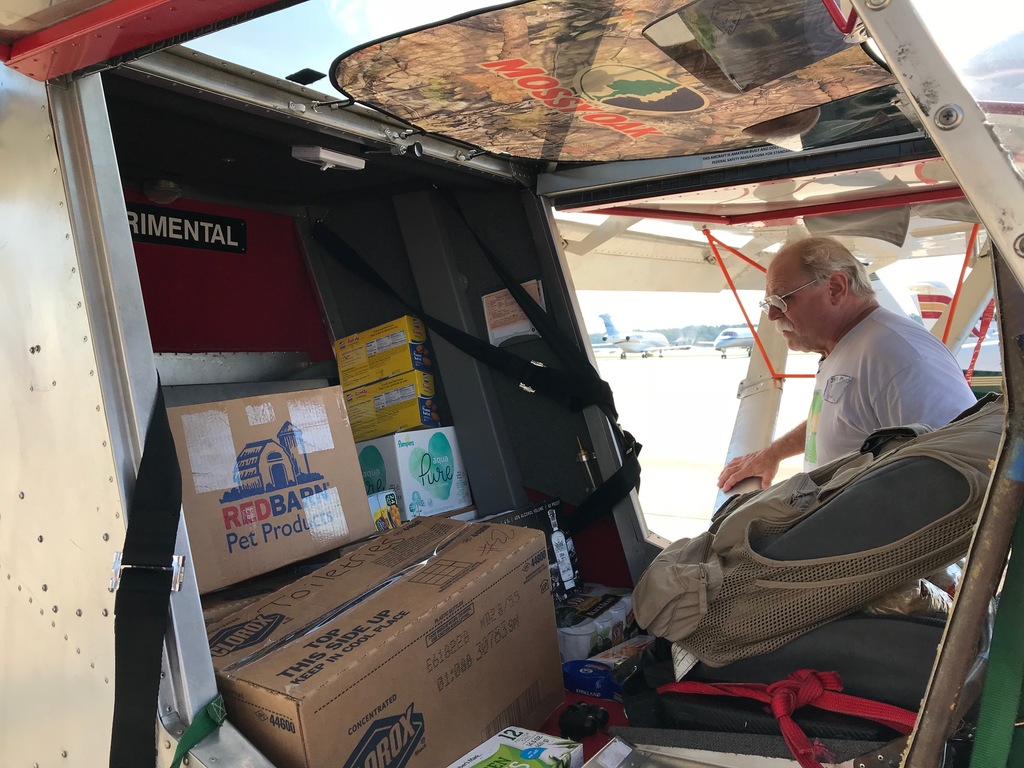 "65-year-old pilot Sam McNair built his Zenith 801 from a kit and has flown the plane all over the United States, including Alaska. McNair, who used to live in Wilmington and now lives in Anderson, SC, has been volunteering to ferry supplies to flooded areas on the North Carolina coast this week for Operation Airdrop. Photo credit: Rose Hoban" 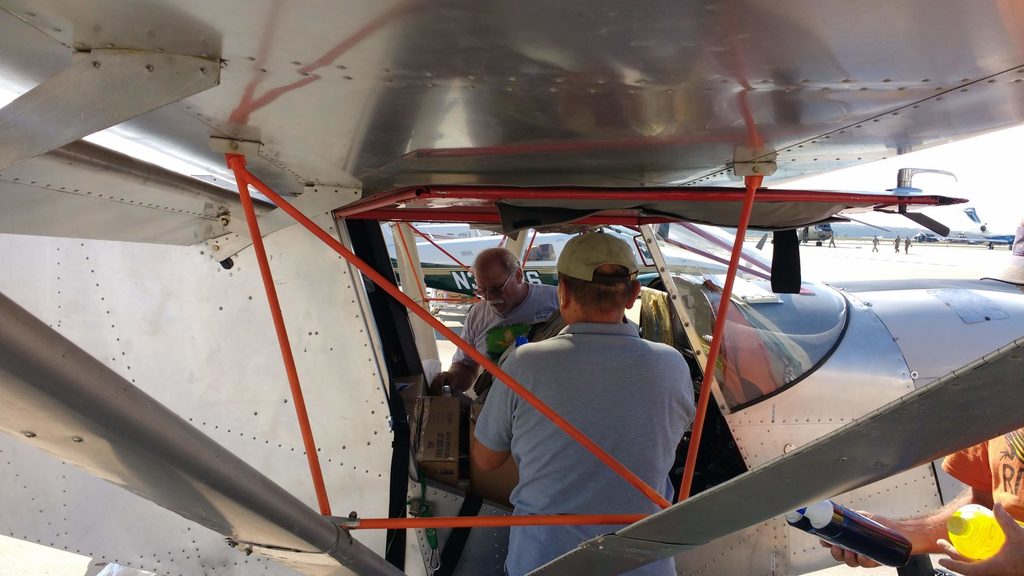 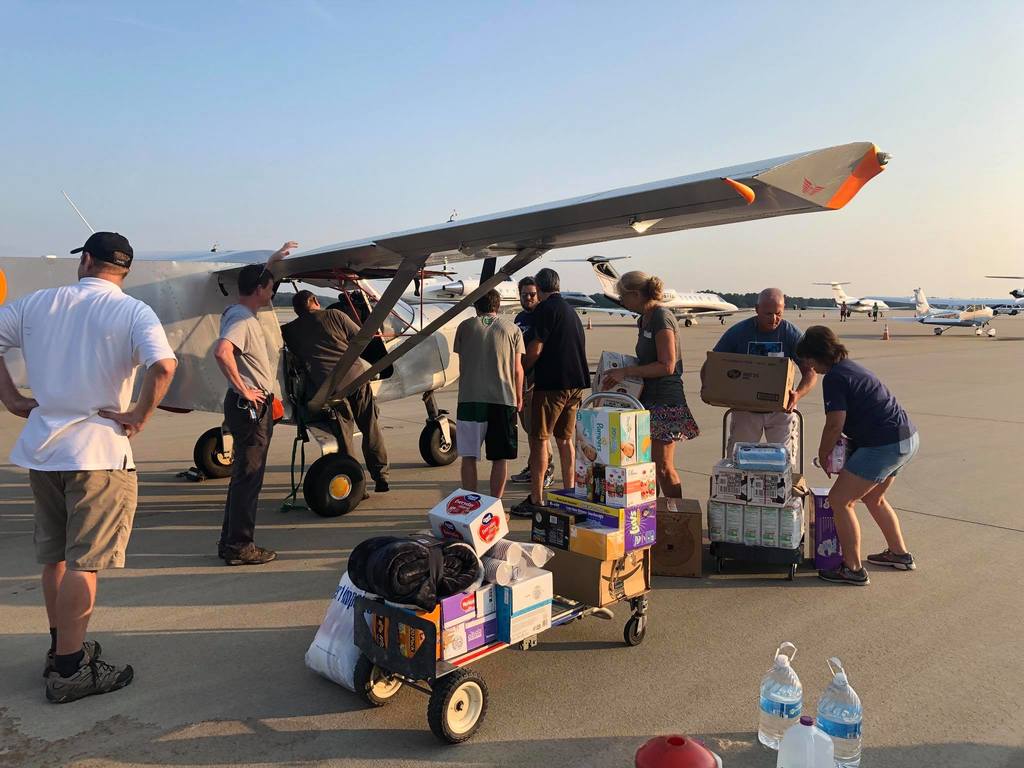 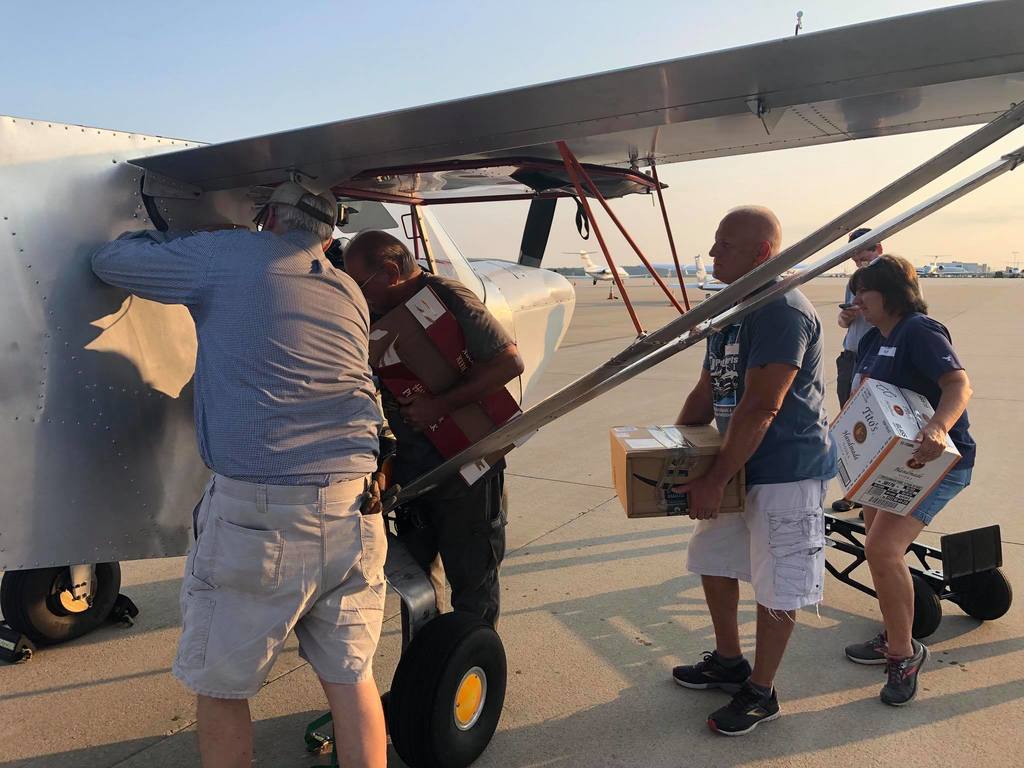 I reached out to Sam McNair to ask him about his personal experience: A modest and true unsung hero, Sam prefaced with "place the emphasis on what the aircraft can do and the part any pilot can play in volunteerism in general. I don't need nor did I ever desire any media coverage of me specifically, but of the airlift in general. I did not even know that those photos of me were taken. As I mentioned, the CH 801 grabs attention anywhere I go." 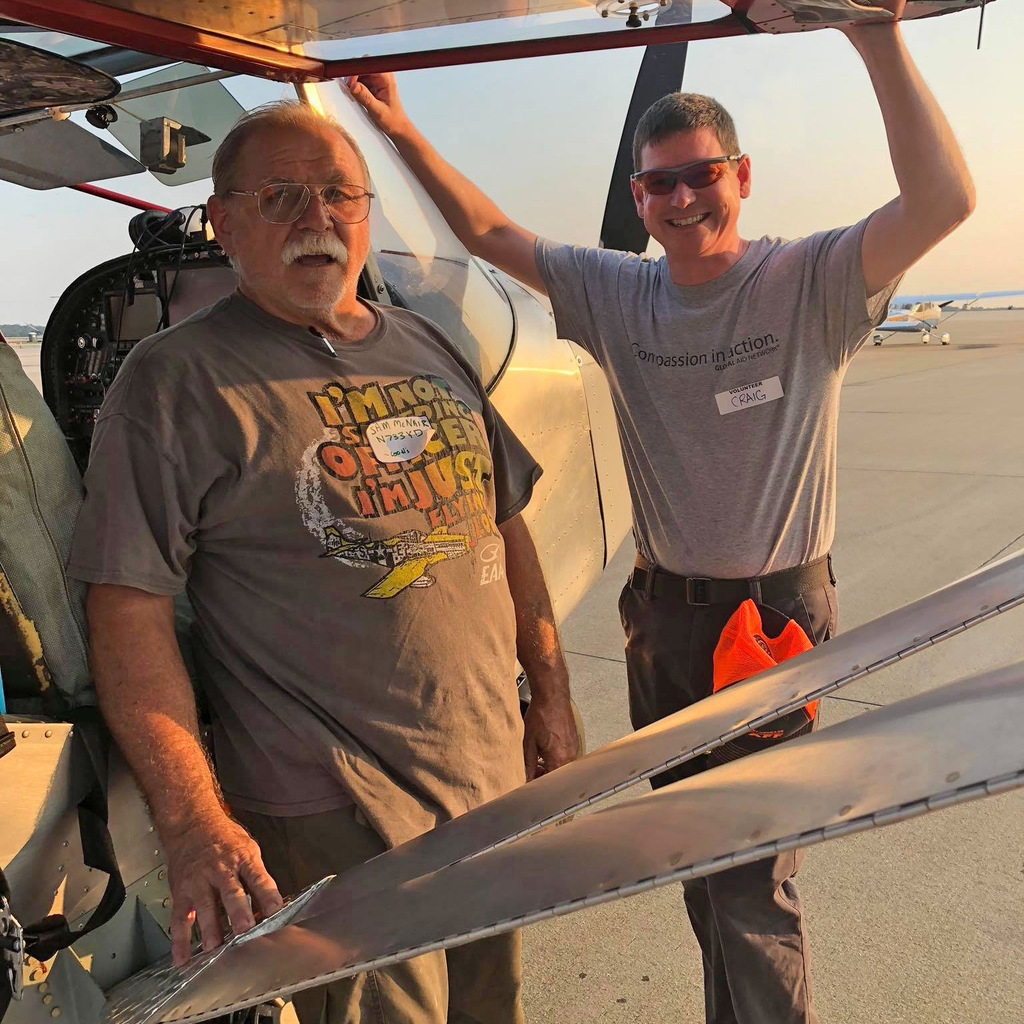 "There is not much to tell. I spent Monday evening removing the interior of my plane, servicing it, loading my camping gear and all the relief supplies I could cram into it, and reversing the front passenger seat (with the upholstery removed) to make loading and securing cargo easier. I made a total of 15 flights carrying an average cargo of a bit more than 600 lbs each flight, up to a maximum of 750 lbs. 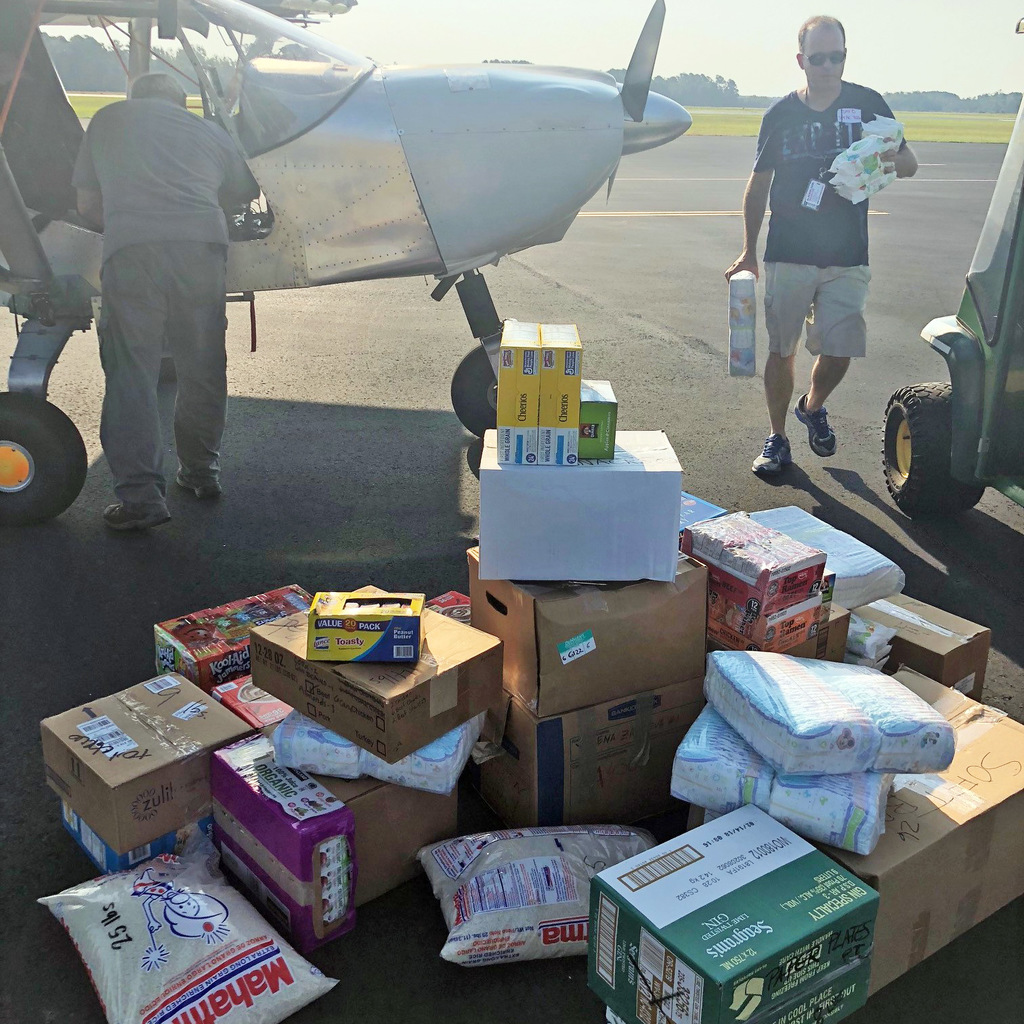 "I delivered in all a bit more than 9,000 lbs of cargo. I went through about 350 gallons of fuel. As the gentleman in the article mentioned, you can easily "cube" out before you "gross" out. 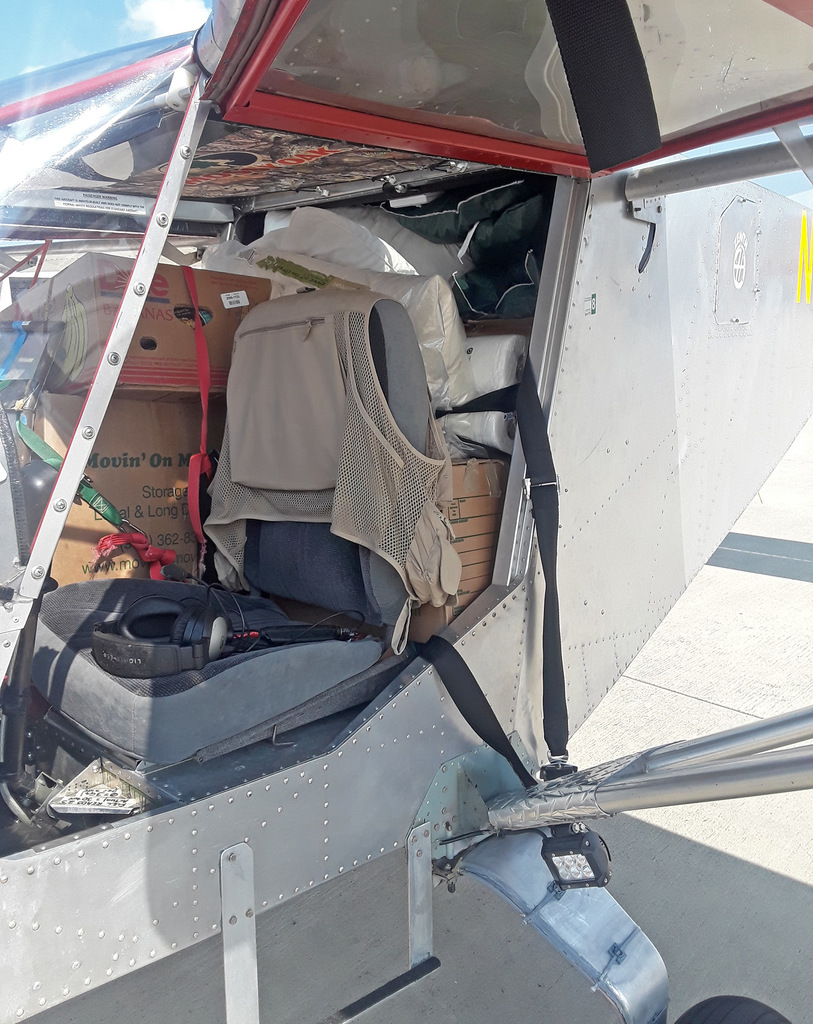 "Without the cargo pod I had on my first 801, I needed more space. Fortunately I had installed a cargo bin immediately above and behind the rear passenger seats, designed for 50 lbs at 6 G's prior to my Alaska trip. It was handy for bulky, low density items like clothing, paper goods, etc. On one trip I had about 450 lbs of water and the remaining 300 lbs was fresh bread and it came in handy. The plane smelled like a bread truck. "Most of the trips were rather short distances (70 to 90 NM) where the rather low cruise speed of 98KTAS at low altitudes did not add much to the total flight time. It frequently required 20-30 minutes to get clearance to taxi and get a take off slot, and 30 minutes or more holding and then sequencing to get the #9 landing spot in the approach stack up. Raleigh Durham International Airport (RDU) was one busy airport. 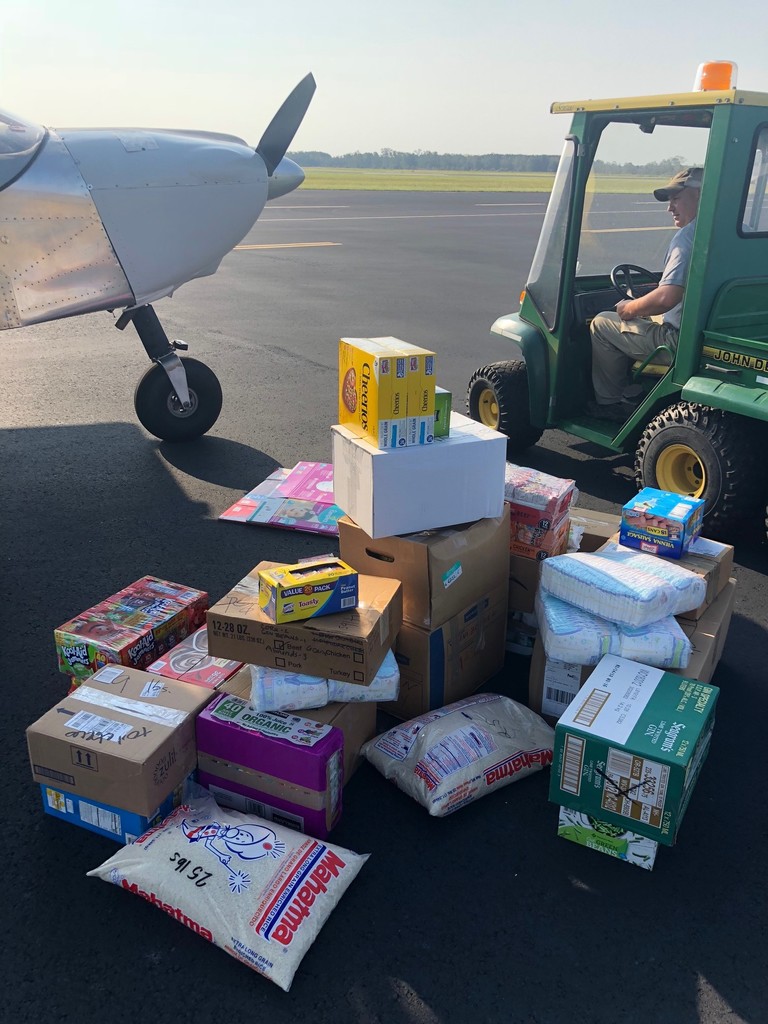 "The organization and effort put forth by the people on the ground was amazing. Us pilots were just the truck drivers. The people on the receiving end who were working all day to move and distribute the supplies we delivered, then had to go homes which were in many cases flooded or shelters are the true heroes of the effort. "When participating in an effort of this sort something to keep in mind: many of the volunteers have never even been close to an airplane. They know nothing of ramp safety, don't know how easy it is to bend aluminum, and can be very casual around a prop. The loading crew turnover is high. You have to watch them like a hawk and shepherd them like a sheep dog every minute that they are out the door. After getting the wires ripped out of my fairly new Lightspeed headphones by a well meaning volunteer on the first load out, I personally loaded and unloaded every item to make sure of no damage and ensure that it was properly distributed and stable before the tie down straps were tightened. Volunteers also don't know about hazardous substances. Things like gallons of Clorox and cans of Coleman Fuel were getting stuffed into planes unprotected until we caught on to that and took special precautions. 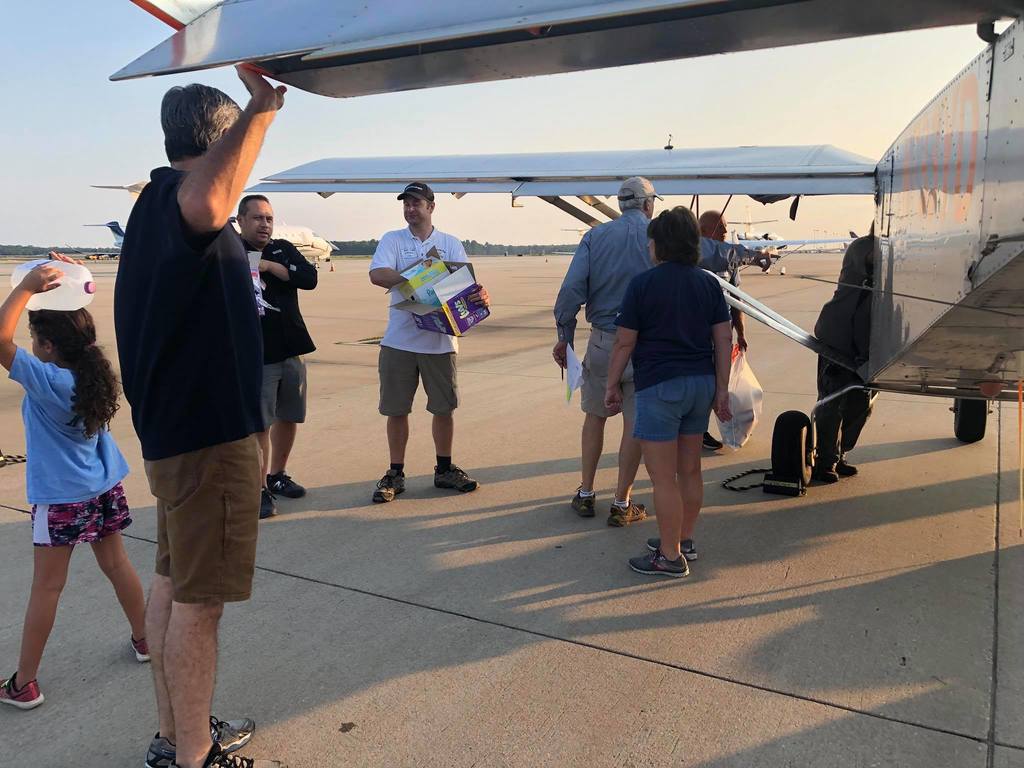 "The deliveries were, with one exception, into normal paved airports. I took one load into a drag strip since the people were cut off on the wrong side of the river from a functioning airport. I had 760 feet from ~40' finish line billboards on one end to a power line and 50-60' trees on the other, with ~50' between 3' or 4' high guardrails on each side. The STOL CH 801 got in and out with room to spare. However a Helio Super Courier that attempted it clipped a power (thankfully no crash, no injury) and the decision was made by airlift management that no further flights were going into there. The CH 801 certainly did the job. 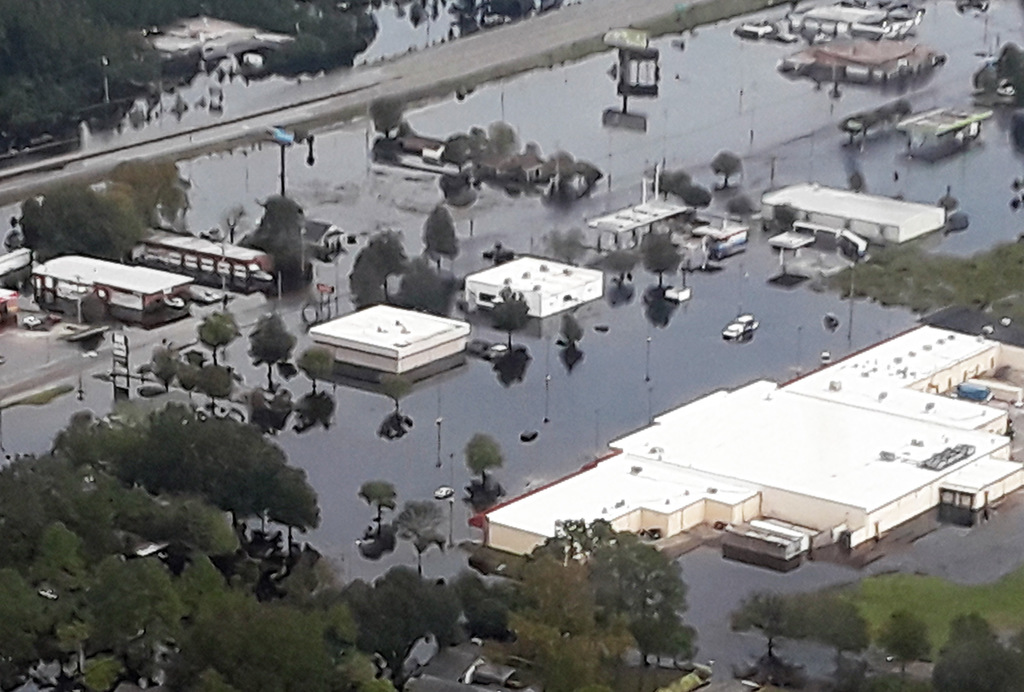 "I checked my logs and in the not quite 6 days I was in the air 31.6 hours and operating on the ground an additional 15 hours due to the huge pile up in traffic. It peaked at a rate 3 times the pre- hurricane record for RDU, or an operation about every 1.4 minutes from only 2 runways. "Many days were hazy with low ceilings around RDU, and on the last day we had to wait until RDU got to IFR approach minimums before we could take off. Every other flight was VFR / MVFR due to the choke effect that filing IFR would have had on traffic flow. The time and money spent building my IFR panel and adding the synthetic vision was great for mission capability. When it's real hazy and the ceilings are 1800 MSL, you are at 1500 MSL, and there are towers out there from 1800 MSL up to 2350 MSL, that synthetic vision is a real nice second set of eyes watching out for you. Ditto for ADS-B in and out. The controllers and pilots were exhausted and mistakes were made. Twice I had to take evasive action when ADS-B showed aircraft on intersecting courses at my assigned altitude in terminal areas with no warning from ATC (talking to different controllers it turned out). Both times the aircraft were close enough to read the tail numbers after I evaded. Think of going into Oshkosh mixing it up with commercial airline flights and you get a feel for it, all week long. If you haven't already, bite the bullet and get the ADS-B. It is not a substitute for own Mark1 eyeballs but a great second set of eyes in poor visibility. "The enormous number of people who donated the supplies and volunteered their hard labor to make it all happen are the ones who are deserving of the credit for success. And the people and businesses who kept the volunteers fed on the job and those who opened their homes to the pilots also deserve gratitude."

"My Zenith STOL CH 801 has the dual stick arrangement, and the passenger stick is easily removable. The ease with which you can convert the CH 801 for different missions (including sleeping 2 inside) is incredible. In less than 1/2 hour, I had it converted back to 4 seats for six Young Eagle flights the following weekend. The kids all want to fly in the "weird looking" airplane. It certainly catches attention wherever I go."
As stated above, Sam McNair recently flew his STOL CH 801 to Alaska and back. Check out the amazing video and report of an awesome flying adventure! 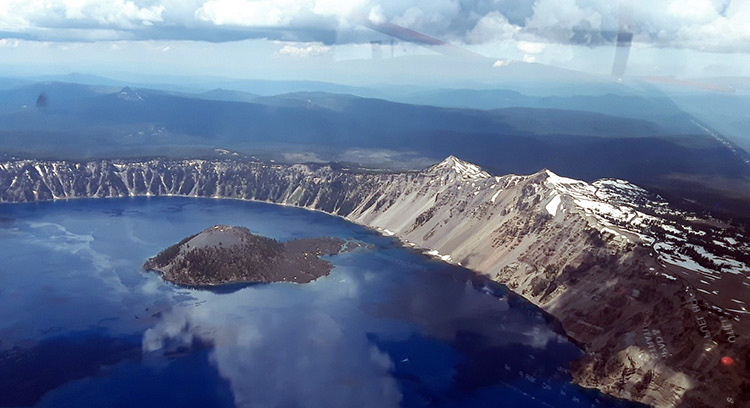 Follow up: Sam McNair reported the following about an unfortunate misunderstanding following the Operation Airdrop flights:

"It has showed up in the media that I used my CH801 to support the recent Hurricane Florence Airlift. Also and unfortunately now showing up on the internet is an erroneous report from the GSO FSDO to the effect that I hit a power line with my 801. The FSDO created this report based on a 4th hand hearsay informal report. It was entered into the database before even taking any steps to confirm the information. In fact the power line was struck one hour before I arrived by a Helio Super Courier. All of this has been confirmed by photos, a video of the strike, FAA ATC tapes support it, and testimony by witnesses on the ground attest to it. I have a letter from the FSDO to the effect that I am not longer being investigated. But it is not over yet...

"But for reasons that I cannot fathom the FSDO allowed the erroneous & unconfirmed first report to be released to the public. I just became aware that it is circulating on the internet this weekend. And the FAA has yet to correct the erroneous first report in their database - if ever they will. Once on the internet, information - right or wrong- never goes away. I am asking the Zenith community to please help me out by not forwarding such false reports if it comes into your possession and if possible informing those who sent it of the error. Neither I nor our community need the adverse "press" arising from false information.

"Zenith pilots fly a very capable and attention-grabbing aircraft with unique capabilities. This enables us to do the things that we do simply because it is a very capable aircraft, not because we are risk takers or daredevils of some sort. So please help me keep adverse 'press' from spreading. None of us need the bad publicity. I apologize in advance if my service to those in need and this irresponsible action by the FSDO results in any bad reflection upon the Zenith pilot community."

Wow what a great story, I love it. I would like to meet you Sam as I stay at my sister in laws 2 a year on way to Florida and back. She is in Leland just outside Wilmington. Tks Wayne