It describes the Pro's and Con's of " Amphibs " amphibious floats, and goes into detail regarding the various pitfalls a prespective float plane pilot should expect. I have spoken to the author, and have received his permission to reproduce the article in whole or in part.. 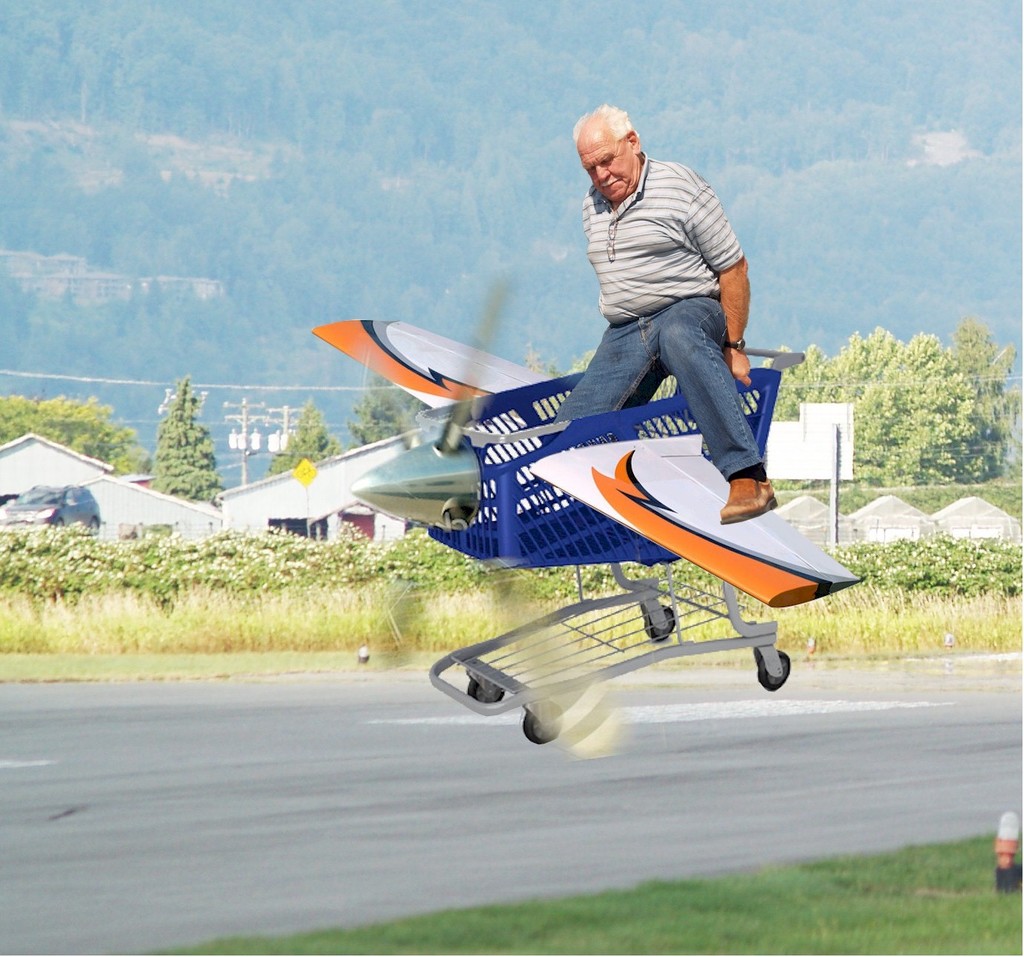 A shopping cart (carriage, buggy, trolley, or wagon) is a cart supplied by a shop, especially a supermarket, for use by customers inside the shop for transport of merchandise to the check-out counter during shopping, and often to the customer's car after paying as well. Shopping carts are usually fitted with four wheels. However, if any one wheel jams the cart can become difficult to handle. Most American carts have swivel wheels (caster wheels) at the front, while the rear wheels are fixed in orientation. – Wikepedia.org

A while back, I was asked by Ken Smith of Upper Valley Aviation if I would give one of his clients a "check-out" on amphibious floats. The client, standing next to grizzled Abe deJager at the Chilliwack airport asked Abe, "What’s it like to land an amphib on the runway?" Now, Abe has landed just about everything from a Beaver to a 25 lb. trout and as a big toothy grin emerged, he uttered, "Why it’s just like landing a shopping cart!" And you know, he’s got it about right.

Quite often pilots think that the best of both worlds is having a float plane that can land on the water as well as on the tarmac. Well, the truth of it is that a straight float plane is the best of both worlds in terms of performance and maintenance but as it becomes more difficult to find fuel on the lakes, amphib floats begin to make more sense as you can just slip into your local airport and fuel ‘er up.

Or do they? , so let’s have a quick look at the pro’s and cons, as one of my clients just did when they purchased a new aircraft on amphibs, because the cost of their insurance climbed quite quickly with amphibious float operations. Counter that with if you are new to amphibs, the cost can climb even significantly higher. Insurance companies have taken note that aircraft with amphibious floats have a higher number of misshaps ( read that as being accidents ) than those with straight floats and there are a number of reasons why. In reality, it is not the aircraft that has the higher number of accidents, it is the amphib pilot that does.

The most common accident on amphibs is either landing " wheels up " on the tarmac, which of course makes taxiing extremely difficult, or landing wheels down on the water, which makes taxiing impossible. The configuration of an amphib float is such that if you touch down on the water with the wheels extended, the rear wheels immediately give the plane a forward, nose down momentum, like a real swift kick in the pants. Then the front wheels, like those of the grocery cart which extend below the floats, catch the water, and in a flash you find yourself upside down like a stranded turtle.

Check out the " You Tube " video at the following, for an example of a wheels down landing " FOUR GREEN " in any body of water. Just be sure to get back here to read the rest of the article.

If you survived the capsizing, then your problems have just started. You must egress the inverted aircraft whilst possibly being disorientated and still strapped in your seat. During my last experience with the owners of a recently acquired amphibious aircraft, that had just been imported from the United States and that with very minimal gear. I immediately suggested that they go out and purchase four top quality lifejackets that they could don while flying. I received a call back and he said, "Do you know the price of those life jackets? They’re really expensive." A quick reply was all it took. "How much is your life worth?" If you are flying a certified aircraft, the rear passengers have the real problem. Forget the gear? "It won’t happen to me," you say. Well it keeps on happening each and every year. Example; the pilot that I was asked to do the check out with in Chilliwack promised me faithfully that he would use the check list whenever he landed and I took him at his word. Two months later, there was a "wheels up" on Runway 26. Must have overlooked his check list ?

Amphibs always require much more maintenance. Keep a grease gun handy and pump the wheel bearings full of grease each time you finish a flying session, not that they may require greasing, but just that the new grease tends to push out any water in the bearings. I have found over the years, especially when we were flying in salt water, that sea water or any kind of water does not increase the reliability of your brakes or wheel bearings. In fact, try not to depend on your brakes too much for you could find that as you try to either slow down or turn, the plane does not espond well because of corrosion.

One brake that works, and one that does not, can introduce your plane to do a new style of Square Dance. Many an amphib has ended up in a small crushed ball of Aluminum at the end of the runway, for just this reason. Plan your landings on the runway so that you can let the plane roll to a lower speed without the use of any brakes. If you have the older type of Edo’s with electrical contacts, big trouble looms ahead for you. The same with any floats having gear doors. Lots of inspections and maintenance are needed for amphibs. Carry a can of WD 40 in your back pocket. Contrary to what you may think, WD 40 is not a lubricant but it is a wonderful liquid for displacing water. I spray everything that looks like a screw, nut, bolt, or washer before any flight into the water. In fact, if you want to waterproof your flying boots, just give them a shot of the old WD also.

A flying grocery cart is not a well mannered aircraft on landing, and can be as naughty as a three year old brat. It does not like landing from a crabbed position, or from a drifting position, nor the use of any excess in regards to the brakes. These things all spell T-R-O-U-B-L-E in capital letters. Peek under your floats and have a good look because you are going to see a very minimal amount ( if any at all ) of shock absorbers, and small rusty brake discs, intended to stop a very heavy , and hurtling amphibious aircraft, touching down at 60 miles per or so. Squint your eyes a bit and you will also notice small " Tonka Truck " sized tires, not tundra type, but small little-bitty Goodyears, that were designed to squeeze into the float wells. Think about it, no shocks, poor brakes, small tires. Add all of them up, and they do not spell a happy flyer.

If you are new to amphib floats, one lesson you quickly learn is that amphibs have very poor, or no crosswind capability when landing on pavement. Why? The answer is easy. The heavier amphib floats on an aircraft, reduce its roll responsiveness because the floats act like a pendulum underneath the airplane. The high center of gravity of a floatplane also increases its susceptibility to ground mishaps in windy conditions. Add on the extra side profile and the crosswind component, really starts to take effect.

So as you " wheels down " on your favorite strip, with a 36 knot wind at 20 degrees from your nose, the aircraft is bucking like a mare in heat, the plane starts to drift and you are a mere 15 feet above the tarmac. The Univac in your cranium quickly calculates that the amphib floats cannot stand a lot of sideways component and you also recall that landing while crabbing is also no-no. What do you do, well some try " Help Mom ", but take my word for it, that is not going to do you any good.

While amphibious floats give great versatility to an airplane as far as landing options, there is also a significant trade-off. The added weight of the wheels and it's associated hardware, means the plane is definately going to carry less. Performance of the aircraft will be affected, and the price and maintenance of wheel floats is significant, but the trade off is that you can obtain fuel from any airport. Amphibious aircraft are becoming more common these days and can be safe if you follow the rules. The things to remember when flying amphibs are that FOUR GREEN means you are landing at the airport, FOUR BLUE indicates that you are landing on the water, and when all else fails, the words that will help you the most are, "Help Mom!"

From speaking personally with the author, and what I understood from the article, it seem's that the main wheels inside the floats would be the problem and not the nose wheel (s). I grant you that the day I build my own floats, they will be of the three wheel model, ( I still have a set of the original Zenith 1350 amphi plans ) since in the very least, there would be some travel on the nose wheel due to the bungy being in place. However, that won't do us much good , since as you well know, we all try to keep off the nose wheel off the ground as long as we can.

If you would like to discuss this, or any other issue further, please e-me at the following personal address.

You have my best regards Bob, and fly safe

Comment by Bob McDonald on June 29, 2010 at 9:53am
I wonder if the older style 3-wheel floats are easier to land on pavement than the new 4-wheel style.?