This morning, Anne and I drove to the airport and met three friends at 7am for the first flight. Two of the friends are AP and the other is the Tech Consoler and photographer. The APs smoked over the airplane as well as me doing a very through pre-flight.

The first flight only lasted 20 minutes in the air, but that was enough to get things sorted out and land without incident.  Then it was off to breakfast, then home to sleep.  I didn't sleep all that well last night.  Later that… Continue

Just finished riveting the left wing spar, all spars now complete (finally). Hopefully after next week I can start on a wing skeleton.

Please can somebody help me before I have to open an inventory for plane #3. I am struggling to bend the doublers on the horizontal stabilzer.When the doubler comes out the bending break it looks like a dam banana, whats the trick to bending a doubler and getting it to stay straight. I even tried bending it on the edge of a full sheet and cutting it off after bending, this was a disaster, came out like a twisted banana!!. Thankfully I will be needing plenty L's in the build so hoping to…

Today the DAR pronounced N601LT an Airworthy Airplane.  Tomorrow the wings come off to move it all up to the larger airport KPHN for the long high speed taxi tests and first five hours of flight testing.

Then I will fly it back to my home base of 57D to finish up the Phase 1 testing.

This is my only job till July 9th so pray for good weather for me.

When I built the center spar I primed it with Zinc Phosphate but I was not real thrilled with the primer AND it was pretty expensive.  I‘m sure that I applied it too heavy but it’s still not cheap.  On this spar I went back to using Cortec thinned with water as I did with the tail sections.  Not wanting to start a high wing vs. low wing type argument but I will stick with the Cortec from now on, I am much happier with it.  I riveted this spar completely with the “C” frame riveter I…

I find the plans and photos just a little short when it comes to brake line routhing.  I have brakes on left only.  If anyone is really happy with their routing or alternately if anyone would like to share "how not to route brake lines" I would certainly appreciate it.

Several people have requested these plans in PDF format instead of MS Word. The PDF file is attached.

added a wing rack to the work bench.... 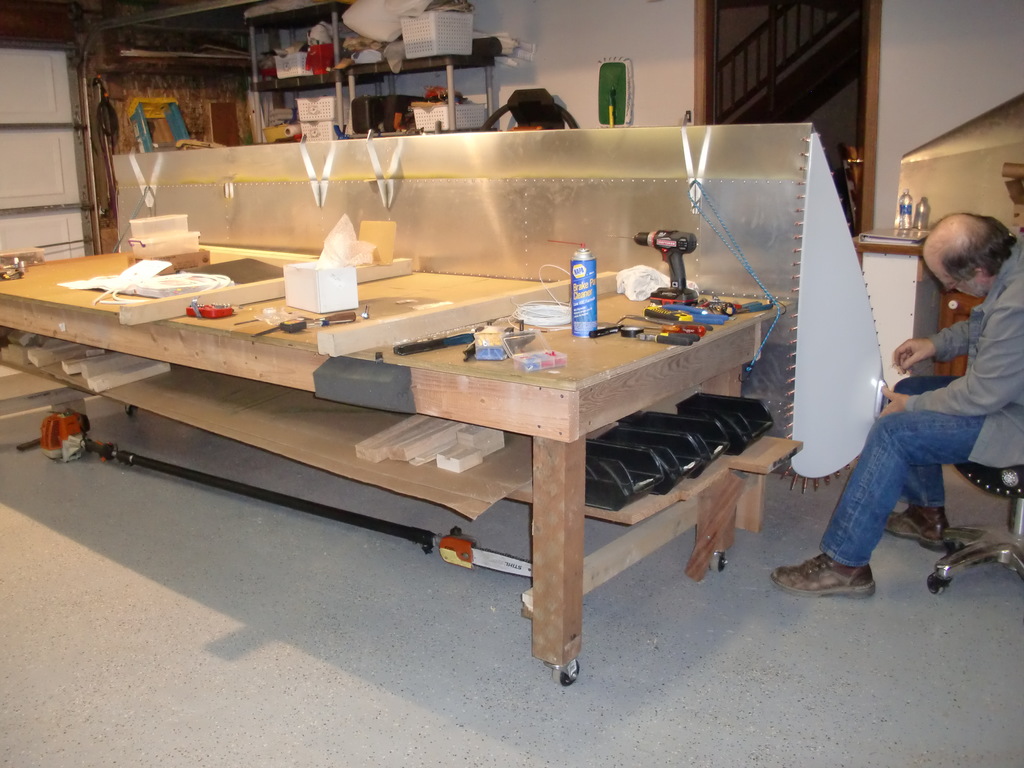 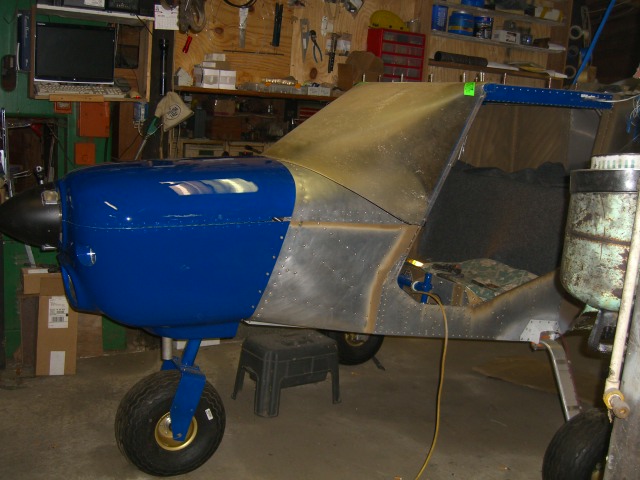 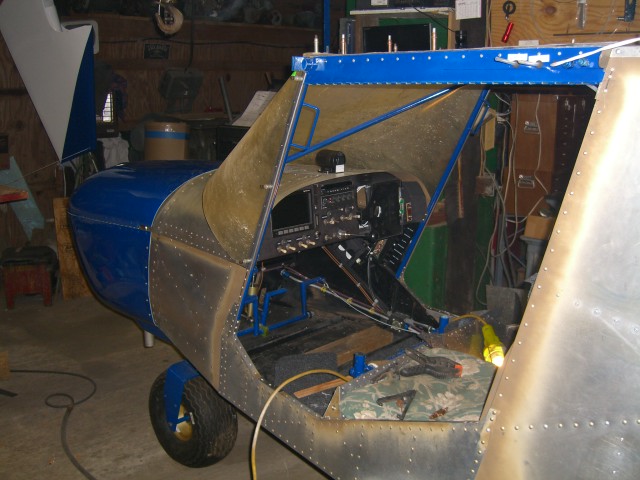 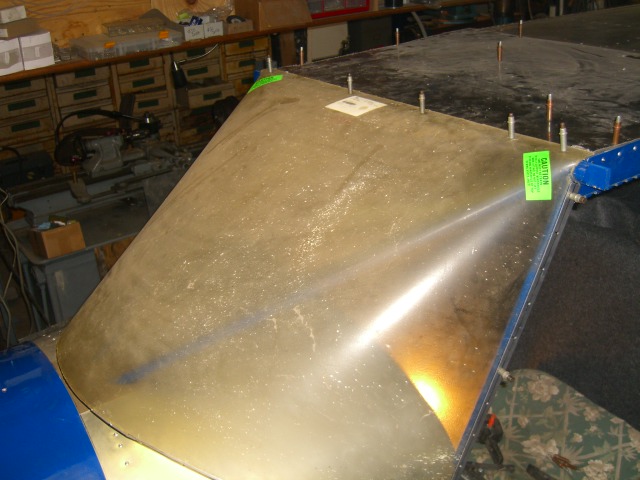 Worked all day, got the windscreen fitted and pilot drilled.

Drilled the tubes first, then used a hole finder to drill the acrylic…

701 builders:  I was too cautious about forcing the screws down on the top aft edge of my windshield for fear of cracking the plexiglass.  As a result, I "wobbled" out two screw holes in the top tube of the cabin frame and now the screw holes are stripped out and won't tighten.  Any machinists out there that can advise me how to fix them without removing the windshield?

Moving Day for the Zodiac Project

On Saturday, June 9th, several EAA Chapter 25 members gathered at my house to move the Zodiac project from it's humble birthplace in a Minnesota garage to a local airport.

The day began with one group meeting at the EAA chapter hanger for some early morning prep and cleanup operations, and another group meeting at my house to prepare the Zodiac for transport.  Several people displayed great stamina by participating in both operations during a hot, windy day and under a…

By Larry Zepp, Zodiac 650B Builder, Fort Wayne, IN

Reducing friction and wear between aluminum and steel at the pivot points in your aircraft is a good goal. Usually, space is a problem – how do you add a bearing or bushing without changing the aircraft design?

A combination of space age technologies has offered an elegant… 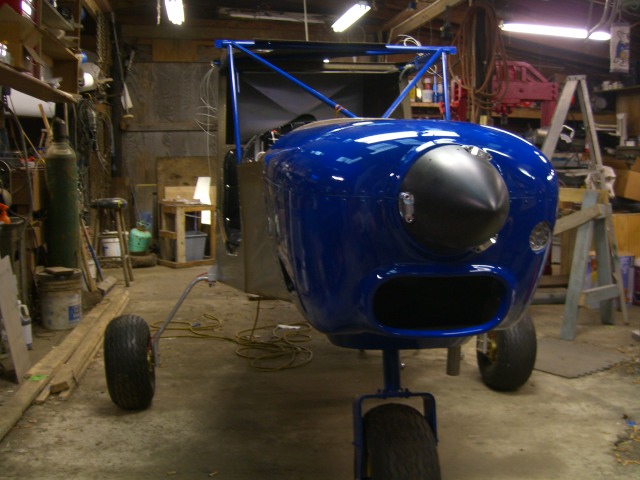 Maybe not quite complete. I still haven't cut a hole over the engine intake.

Even though the Olfa scoring knife gets the job done when cutting aluminum sheet, I kept thinking there must be a much better way to cleanly cut out aluminum sheet. Knife blades are designed to cut soft and flexible materials. When we use an Olfa or utility knife blade to cut T6 tempered aluminum, the aluminum resists spreading at the cut line and requires many repeated scores. Even though the aluminum is thin, the blade must cold flow the…

does anyone know if the 750 double door latch can be retrofit to the 701 bubble doors?

I bought my 601HD in Ft. Worth, TX, on 6/2/12.  My instructor (Jeremy Desruisseaux) and I flew her all the way home to Denver (KAPA) that day.  She didn't cruise as fast as we thought and hoped, so the trip took longer than expected.  We went through about an hour of turbulence that left me at my wits end.  We also ended up spending 4-5 hours in Guymon, OK, waiting for a huge squall line to dissipate over CO.  At about 18:15 central, we made a go decision, jumped in her, and played dodge the…

Got back on the project this weekend after a few weeks absence. Yesterday, I spent time repairing the horizontal stabilizer ribs that I damaged during the initial assembly. Listening to comments from others on this site, I cut some small "L" angle pieces, fluting them where necessary, and reinforced the damaged areas where I got a little sloppy with the drill. Also did some corrosion control with these additional pieces and along the mating surfaces of the ribs. 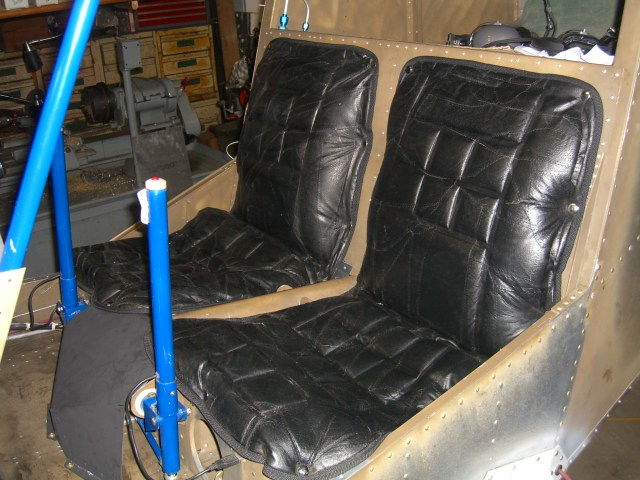