I finished riveting the tail today. Am waiting for fuselage to ship. Super easy to build. Almost no parts. Didn't spend many hours. Didn't keep track. Not a record keeper. I have the green inline pneumatic rivet puller. I finally figured 50 psi and an adjustable air flow restrictor valve allows the rivet gun to square itself to the rivet head before snapping it off. With full 90 psi and full flow the rivet is pulled almost instantly, with no ability to control the gun before, during, or…

Get your "Half Off" CruZer engine firewall forward engine package during the Sun N Fun airshow. Viking will be in space

To say the landslide near Oso is tragic is an understatement. This is only a few miles from my home field of KAWO.

I know this area well. This is the river (Stillaguamish) where I land gravel bars. These are the mountains where I fly. It hits home big.

Currently my home airport is now the center of the rescue and recovery efforts.

If you have watched any of my videos then you know this area too.

Based on some excellent suggestions from others, I bought some lightweight 7mm corrugated conduit (used to tidy up wires in car engine bays) with clamps to suit.

My wife assisted in running a lightweight string through the conduit, I then installed it using some home made 0.025" brackets and taped the ends of the string to the root rib and tip spar.  Now, if I decide to install tip lights, just a matter of taping the wires to the string and pulling them…

Skis for Dummies or Confessions of a Slow Learner

Confessions of a Slow Learner

Having completed the CH750, flown 130 hours in 6 months, and having builder’s withdrawal, I was getting the itch to build something. Wanting to expand my…

EAA - March 11, 2014 - Three U.S. senators Tuesday introduced the General Aviation Pilot Protection Act as a companion bill to one unveiled in the House of Representatives in December, which includes a provision…

Have to put in SOME comment about now, due to my kids constant "How's it going?"

Been working on the plane since 2010 every chance I get, which is few and far between. Enpennage: Done, Wings:90%(going to redo the fuel lines w/ stainless braided lines and AN fittings),Fuselage: Done(lacking marker lights) Gear: Done, Forward fuselage and cabin area: 50% Engine:all internals ready to assemble, waiting on heads to come back from shop. Firewall forward: in planning stage. Same for…

Slotted in the Savannah tank last night.  Fits like a dream!  I made up a couple of brackets fitted to the ribs to support the rear of the tank, clecoed on the front brackets that bolt to the tank, and ran fuel line through grommets in the tank channel and rib #1.

The tank feels well supported and pretty much immovable, and the top surface looks like it will be very close to the top skin.  I'll run a straight edge over the ribs and pack out the top of the tank with cork strips or…

Please join me in the new arrival (3/12/2014) of serial #116. Just as a new parent years ago, I learned much from those who came before me. Any nuggets of knowledge/wisdom any of you would like to pass down to this beginner builder will always be much appreciated. I anticipate a three to five year plan to maintain family balance and participation. I feel lucky to be in the group of (640-er's). I believe this aircraft truly hasn't had the opportunity or exposure in the USA it… Continue 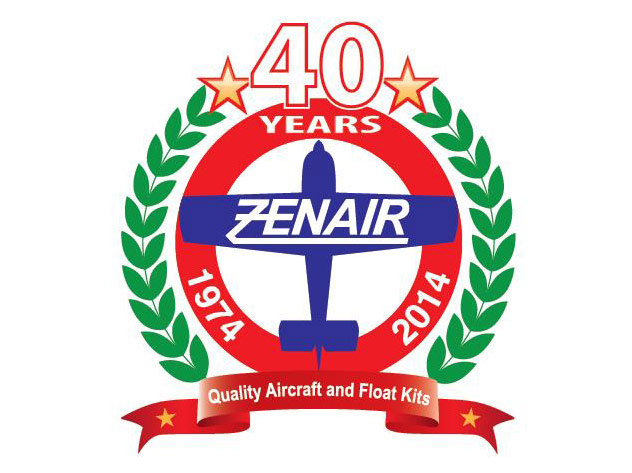 One of North America's leading manufacturers of recreational aircraft kits is turning 40 this year. Zenair Limited was founded by Chris Heintz in his 2-car garage in 1974; the company… Hello fellow builders.
Can anyone tell me what size 1/4 turn Camlocks i should order for my Rotax 912 cowling from Zenith Co?
Thank you,
Johann G.
Iceland.

We've changed out the original Sensenich fixed pitch wooden supplied with the Jabiru 3300, for a Whirlwind GA-J2B 63" ground adjustable. However, it seems hard to get speed or economy. Anyone have some happy experience with the CH750/3300 to share ?

Hi Fellow Zenith flyers and builders, I'm in the process of fitting a new propeller to my CH701.  I'm running a Rotax 914 turbo (115hp).  I'm not keen on a constant speed propeller, so what propeller would be appropriate to get good results for my aircraft?  If you have any experiences good, bad or otherwise, please let me know. Volkys

Between our local chapter meeting (Chapter 182 - Memphis) this morning and a DU banquet this evening, I didn't have much time to play in the garage today. Busy schedule during the week prevented me from getting any angle iron for a bending brake. So this afternoon I cut out the form for the second wing spar. I traced it out using the 1st spar so the hard work was the cutting with the Olfa knife. Fortunately, it cut cleanly. Winter weather moving in again tomorrow so play time might be…