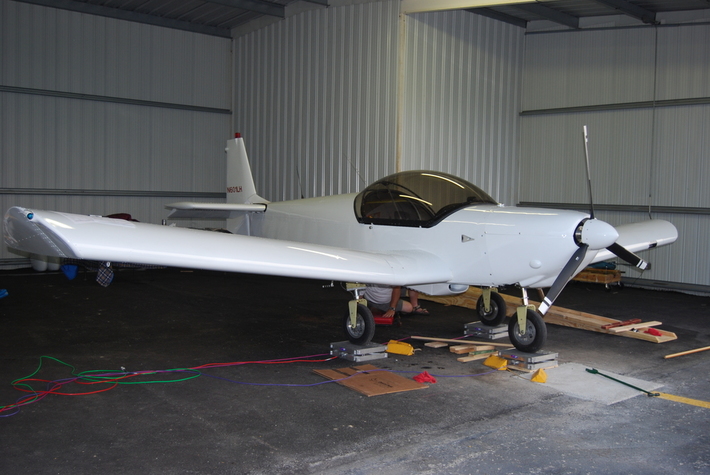 Building and Flying Info / Your Profession / Other Background Info
Cad Technician for American Structurepoint, Bridge Plan Production
Grew up as a sailplane pilot, had a pilots license before I got my drivers license
Been scratch building a 601HD since 1997, working just one evening a week with my partner Leroy Wheeler, slow but very steady and consistent will get you there eventually.

On Friday September 18, 2009 our plans-built CH601HD received an airworthiness certificate and was successfully flown by a friend of ours with 650 hours in his 601HD, Alan Gluff, at Mount Comfort Airport (MKQJ) Indianapolis, Indiana. Except for a minor temperature issue, which has since been resolved, it flew quite well. We would have been happy with 105 to 110 mph, but it zipped along at 120 mph. We were quite pleasantly surprised.

Eric Shupperd said…
Hello my name is Eric and I live in Windfall In. I would like to talk to you as I am getting ready to start my 601xl build.

I have still been gliding although due to bucketloads of rain over summer the conditions were n't very good. With the Zodiac grounded I've been back to driving to and from the gliding club. My glider now needs it's annual overhaul and conditions are getting milder as the temps drop for autumn so I'll bring it home for winter soon.

I managed to find some info on how to fit safety springs to Bing carbies here:

and I did read a note that said the Bing carby diaphrams need replacing every 300 hours.

My advice (after sad experience) is don't fly bing carby's without safety springs. I've been told there are other incidents of them falling off engines. I think in my case it may have been caused by over tightening the hose clamps as I'd had the carbies off to change the jets 10 hours previously.

It may be a good idea to post a notice somewhere here to let others know of the potential problems of not having the retaining springs fitted. I'm not sure how to do that.

Can you please tell me what caused the teeth to strip off your redrive belt? My aircraft is some years old now as it was sitting in a mostly built condition for ages. I've been inspecting the belt on my motor and it looks ok.

Lismore is near Byron Bay, the most easterly point of Australia and a well known holiday destination. It's unlikely they'll be stopping or preforming here as it's a smallish city.

G'day. I'm glad to hear you're getting plenty of airtime in your Zodiac.

I spent around 20 hours dealing with overheating issues with my EA-81 and finally solved them by mounting the cabin heater on the top left of the engine (where you have yuor oil cooler) as an extra cooling radiatior.

The plane ran well for another 20 hours after that until one of the carbies came loose on final putting me into a paddock with clumps of grass 3 ft high.

This incident bent the front wheel back and damaged the firewall and under-skin as well as bending 2 ribs in the left inner wing section and damaging 2 prop blades.

The plane's been sitting under cover in my back yard for over year now. I have removed the engine and stripped the damaged wing section. I've been too broke too buy the parts to fix it. I'm 90% decided to convert the Zodiac to a tail wheel aircraft to give it a better rough field capability. I'm prepared to put up with the handling issues as I can see the firewall easily getting damaged again by the nose wheel.

What's most annoying is that a friend had pointed out that I had no safety springs on the Bing carbies. I'd accepted the advice but hadn't gotten around to fitting them.

It was nice to meet you at Sporty's. Hope your flight back to Indiana was not too bumpy.

Good to see another CH601HD flyer. I see you have a partner, me too! My buddy Ray Nash wanted a CH601HD so I bought the other half of it. We were both flying Challengers at the time. He still has a Clipped Wing Special Challenger...and I now fly my CH750 more than the CH601HD.

Steven Ward said…
Dennis, wow, plansbuilt! Thats some ﻿﻿﻿serious dedication. You have built yourself a beautiful airplane there. That is an impressive cruise speed you have. I started plansbuilding the 750 in July 2009 and I have a long way to go! Sometimes the whole project seems overwhelming and that I will never get to that first flight, but they say little-by-little, one piece at a time will get one there slowly but surely.

I thought you'd like to see the pic I took of you and Leroy the night I was visiting your project.