Like the VW Beetle, the ad copy has become a classic too.  It caught my attention because our STOL designs have been called "ugly" by many over the years, while at the same time the STOL brand has gained in popularity and the fan base for these unique airplanes continues to grow, despite (or because?) of its "ugly" look.

The rest of the ad copy is equally informative and entertaining, and the similarities with Zenith STOL airplanes are uncanny: 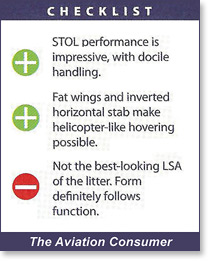 Earlier this year, Aviation Consumer magazine did a thorough consumer review of the the STOL CH 750 light sport and concluded that the CH 750 is, "Not the best-looking LSA of the litter. Form definately follows function."
Maybe we should use this as the title of our next ad.

Beneath that humble exterior beats an air-cooled engine.  Despite our good experience with the liquid-cooled Rotax engines, many pilots prefer air-cooled direct-drive engines, such as Continental, Jabiru or the new ULPower engine (and of course the Lycoming in the four-seat STOL CH 801).

After a while you get to like so much about the VW, you even get to like what it looks like.  Many of our customers, after building and flying their own Zenith STOL, find beauty in the design and the appearance of the aircraft.

You find that there's enough legroom for almost anybody's legs. Enough headroom for almost anybody's head. With a hat on it.  Well, we all know that cabin space in most light aircraft leaves something to be desired.  With the Zenith STOL airplanes cabin width is maximized with the domed bubble doors, and importantly also, cabin access is easy from either side with the huge top-hinged doors.

Those plain, unglamorous wheels...  We like big "plain" wheels for off-airport operation!   The bigger the better, and we don't want to hide small wheels under fairings (that fill up with dirt and grass).  Also, we like to show off the big sturdy steerable nosewheel up front. These are airplanes that are easy to handle on the ground (even on rough ground).

Comment by Jock Struthers on November 1, 2011 at 2:22am
Yes I used to think it was "ugly" - and said so! -  I was focussed on the 601 initially until I saw a video of the 701 leaping from  a grass runway. Now I have built one and with a bit of added colour and decals its the most beautiful plane ever built!!!

I never thought the 701 was ugly.  In fact, it was the airplane that first attracted me to Zenith.

After sitting in one, it was pretty tight, so I ended up going with the 601.  But now that the larger 750 is out, that's a candidate for my 2nd project when my XL is done...

Comment by Leo Arrigo on October 26, 2011 at 7:04pm
I think it was Bob McDonald who made the comment on Doug Mac Donalds 701 when he was trying to figure out how to get a few more mph's..."You can only fly ugly so fast through the air"

Comment by Tim Garrett on October 26, 2011 at 5:20pm
The earth repelling joke is normally aimed at helecopters. I guess that is appropriate.

Comment by Rebecca Anne Shipman on October 26, 2011 at 11:45am
The STOL series lets you go to beautiful places, so the plane only looks ugly by comparison.  :)

Just had my first bird strike in the 701 - the bird ran into me from the rear - LOL.

Comment by Randy Owen on October 25, 2011 at 7:26pm
The type of backcountry flying I do with my (unpainted) STOL CH701 has me mixing with a lot of Supercubs, Maules, and Huskies. Oddly, the most frequent comment I hear is that mine is a good-looking airplane..that it looks like a no-nonsense rugged bush plane (which it is). Go figure.

Comment by Malcolm Hunt on October 25, 2011 at 3:09pm
The CH701 to some eyes looked a bit leggy but the CH 750 has a functional beauty and will I'm sure generate a loyal following just like the Beetle. I'm hooked!