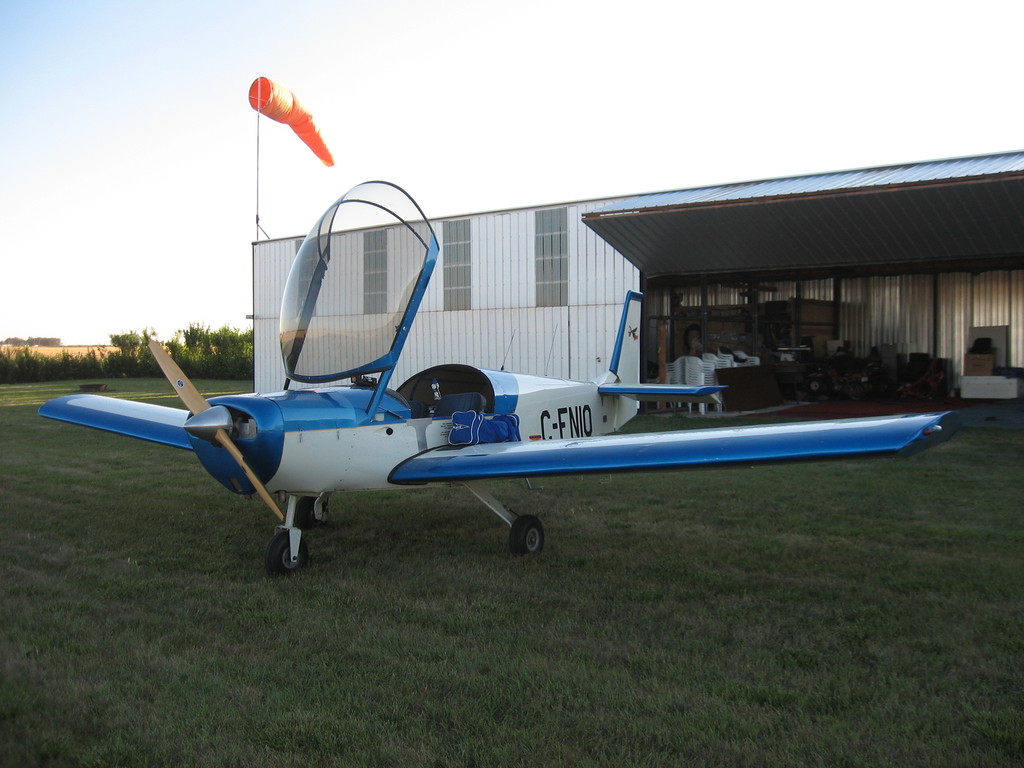 I really like reading trip reports, so here is my first trip report of hopefully many more. I have flown many cross country trips before but they were in my Beaver RX550 ultralight. This trip was the first long(ish) flight that we have taken with our CH601XLB. It was almost a year ago that Dave, Glen and myself bought this 601 from Howard Parr. Howard lives in Regina, Saskatchewan and this is the 5th or 6th Zenair that he has built from plans. He had managed to fly it for a couple of hours but then took it out of service to make the 'B' upgrades. After some health issues, he decided it was time to sell even though it was not quite ready to fly again. Even though we are all plans building CH750s, it seemed like a good idea to buy this plane, so we would have something to fly while we finished our 750s. It has taken us almost a  year to finish the upgrade, assemble, and fly off the 25 hour restriction. We just received our unrestricted Special Certificate of Airworthiness last Tuesday. No more 25 mile tether;,,,, then I am taking it on a trip!

I live in Lethbridge (Alberta) but my brother and sister still live in Saskatoon (Saskatchewan). Seems like a good as any destination. The weather has been great lately, albeit a little hot, and the forecast was for that to continue. I took Friday off from work, packed a few things for the plane (qt of oil, tie downs, etc), a few things for me (clothes), fueled up the 601 and gave it a thorough preflight.

Like most trips, I got away a little later than I like but it was CAVOK with the temps still in the low 20s (Celsius). The air was smooth, so I quickly settled into a trimmed cruise at 7500 ft. The route is almost 350 miles one way but not quite in a straight line. We have the NATO Suffield Military Operating Area which is restricted full time. I chose to go around the north side and drop into Don Francis's, a flying farmer friend with an RV6.

Don has a typical farm strip (ie a nice strip impeccably maintained as  farmers tend to do). I noticed the air was getting a little choppy while descending to the 2000' msl strip. The last 150 miles could be a little rough. Don made me a lunch and we spent a couple of hours catching up on the latest aviation gossip.

The hottest time of day was upon me but I decided to give it a try anyway. I was planning to fly back home the next day and I hoped to get as long as possible visit with my brother. The 100 hp converted C85 got me off of Don's 1800 foot uphill strip with ease. BUT.., the air was anything but smooth. I turned onto the northeast heading to Saskatoon Richter field and started to climb. 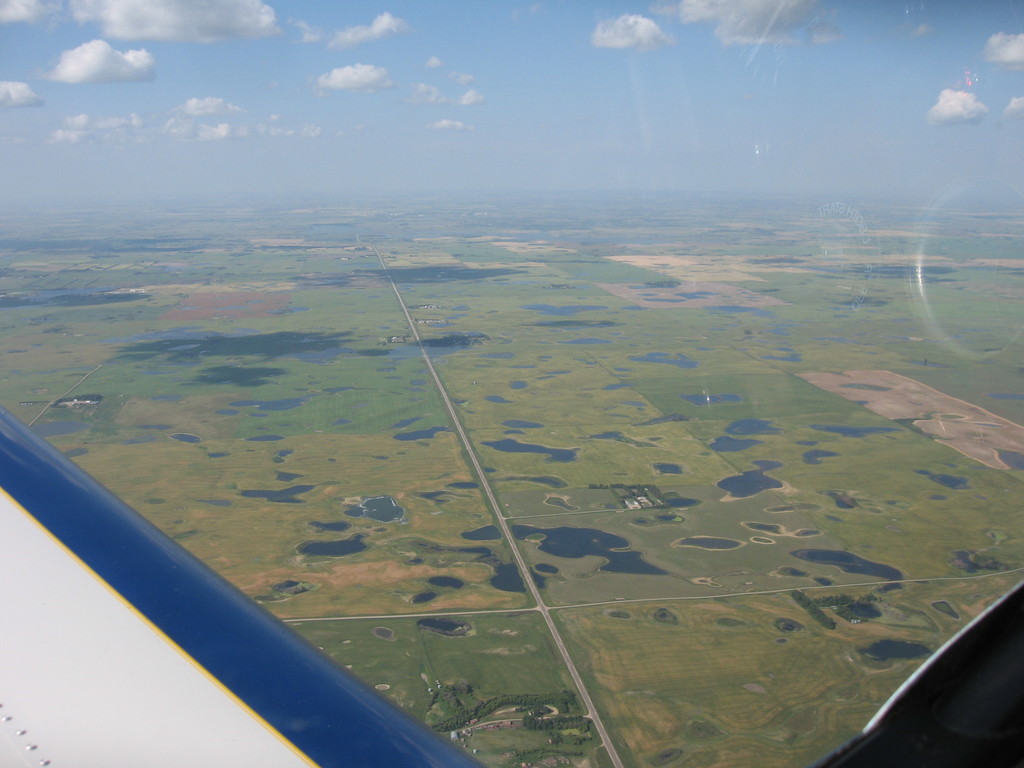 It did not take me long to realize that I was not going to get above the bumps and contemplated going back to Don's to wait until evening. I procrastinated on making that decision long enough that I decided it would not be much longer to get to Saskatoon.

For me, it takes me awhile to develop a relationship with an airplane and until I do , I have to admit that, I do not really trust it all that much. With my confidence level scud running, every bump made me a bit nervous. And there were a lot of them!

Soon enough, I was descending to get under the Saskatoon Class C inverted wedding cake. Richter Field is a gravel/grass strip west across the highway from Martensville (a bedroom community of Saskatoon) and is within walking distance of my brother's house. I watched a Cessna take off and then joined left downwind for runway 26. An uneventful landing had me tying down just as my brother drove in to pick me up. 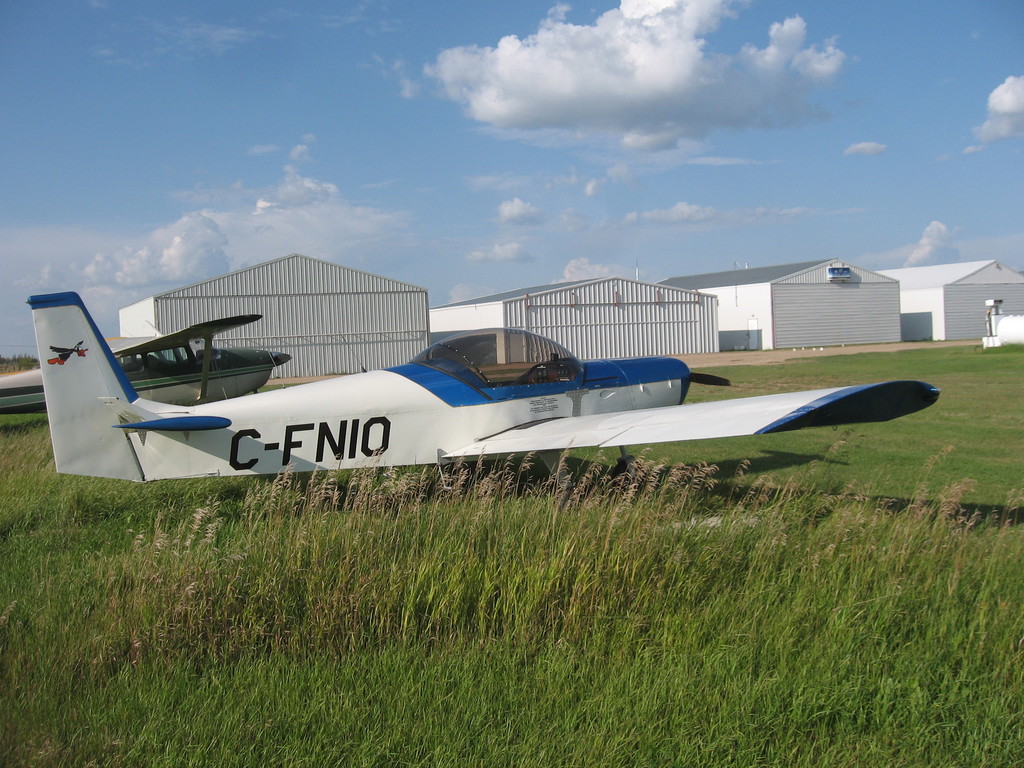 I had a nice relaxing evening visiting with both of my siblings and their families. The next morning we drove out to our old farm to look around and make sure everything was as it should be.

Even though the day was again getting quite warm, I was really hoping that I would be able to fly back that day (Saturday). After fuelling up and preflighting, the temperature was already 30 C. I taxied out saying that I might be back if the air was too rowdy but shortly after climbing out, it was apparent that it was much more stable than the day before. Once getting out from under the Class C airspace, I climbed out to 8500 ft so I could stay cool in the bright sunlight. 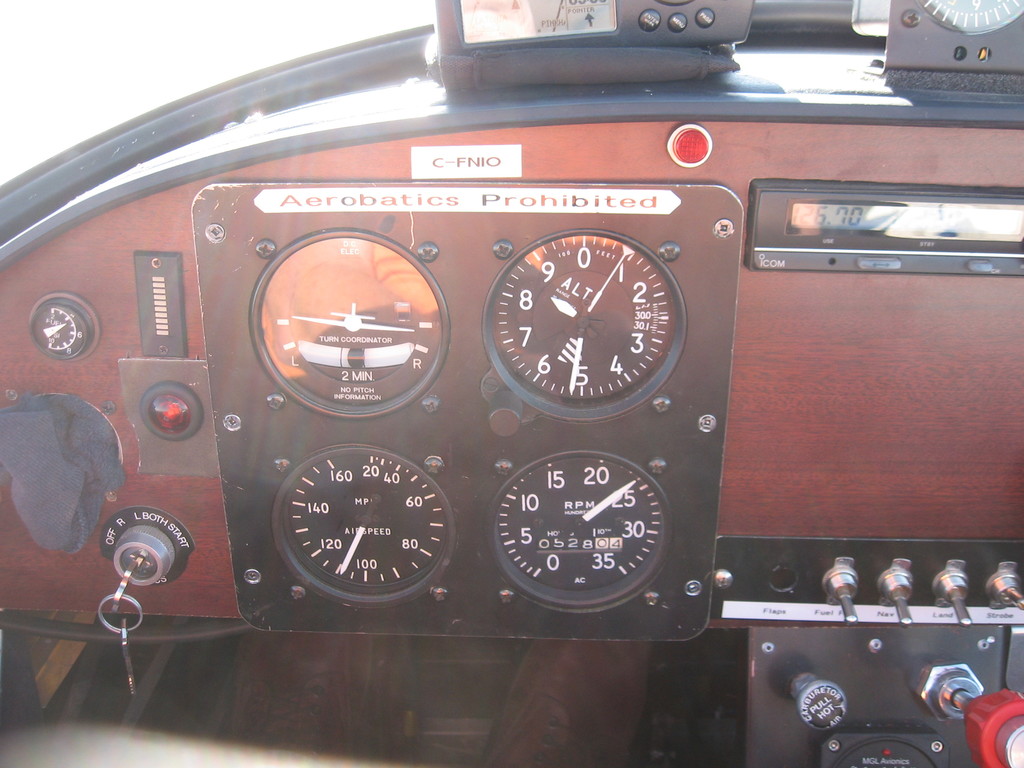 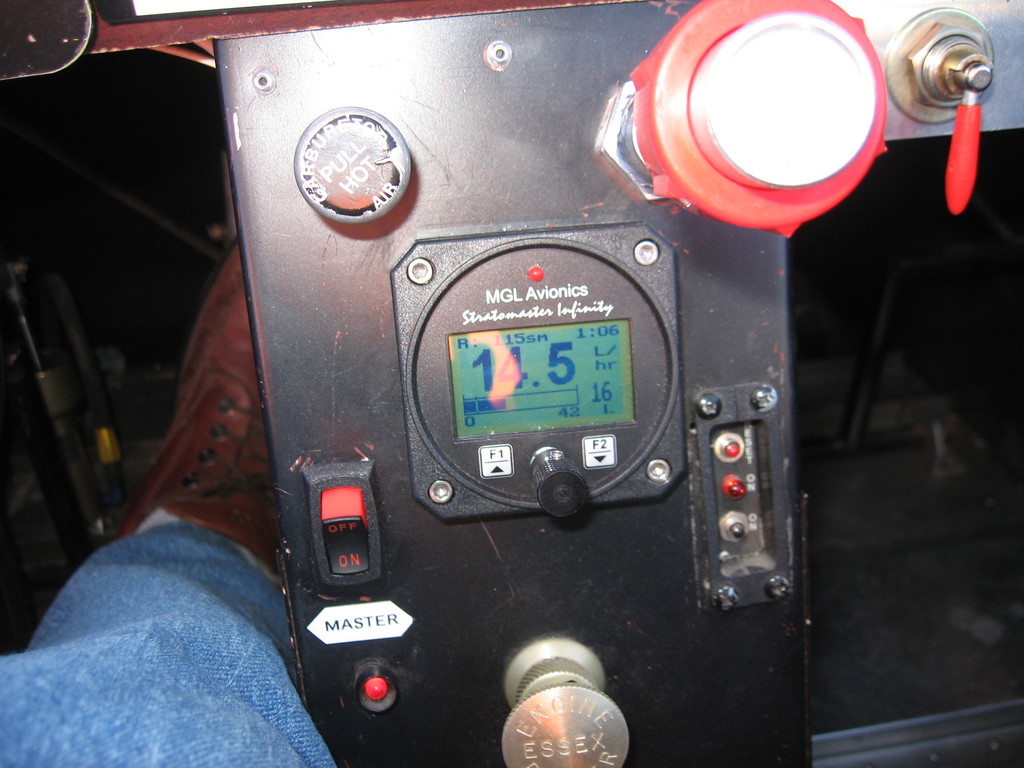 Being a new plane for us we were not very sure what our range was going to be, so we recently installed an MGL fuel flow meter which proved to be a worthwhile endeavor. With the meter, it was quite apparent that I would be able to fly 3.5+ hours back to my home field non-stop. The flight back was smooth, cool, and comfortable. I am starting to develop a relationship with this airplane... Really this trip was about taking out the 601 on a shake down exercise. It performed very well even though there is a few things that I want to add or change, but that is all part of owning a homebuilt. I noticed that the nosestrut bungee is starting fray; I want to put the rubber boots on the nosewheel steering rods; we need to take out some slop out of the control stick pivot point; and I want to paint the back of the wooden propeller flat black. On the plus side, I love the fuel flow meter, the seating is very comfortable, and the cockpit noise level is very acceptable (low).

Sorry that this trip report is a little on the boring side but after asking several members here to keep up their trip reporting, I felt compelled to write up my own report. I hope to read some trip reports from everyone on this forum at some point. Next time I will try to take some more and better photos.

Walt, everyone has their preference where the wing should go, and yes I would rather have it on top. I sold my Beaver ultralight (I really really miss it!) and need something to fly while I finish the 750. A friend from Regina needed to sell this 601 so 3 of us from our build group partnered to buy it. Everyone has their way of building and equipping an airplane. This one is not how I would equip one if I were building it, but it does fly and we will continue to enjoy it at least until our 750s are done.

Checked the trip report out after having lunch with Travis yesterday in Sydney - nothing boring about the report, thanks for writing it :-).

Hope to add a few when our 750's are done and flying. Thanks for the report Joe.

Comment by Tim Smart on August 20, 2012 at 3:21pm
Keep the reports coming they help keep us building while waiting for the day we can add ours, thanks.

I agree, trip reports are good and they don't have to be "exciting" to be interesting.

Great trip report... not boring at all.  After all, we don't want our trips to be too exciting!
Thanks for sharing.