The Culmination of an Amazing Journey

The following article by builder Bob McDonald is published in the current is of COPA Flight, the magazine of the Canadian Owners and Pilots Association. Bob, thanks for sharing your story!

C-IKIM: Culmination of an amazing journey
by Bob McDonald

On June 28, at 1:30 p.m. my CH750 kit built aircraft took first flight at the Kitchener-Waterloo International Airport. I had built it at the Canadian Zenith Aircraft dealer (Can-Zac’s) hangar #41 over this past winter.

Under the patient tutoring of Mark Townsend, I built my CH750 in a very intense building regiment of 10 12-hour working days when I was in town. I live 500 kilometres away in the small hamlet of Haley Station, Ontario. On my days off between shifts I would drive to Can-Zac and build my CH750.

After the first test flight, the cowls are removed and everything is once again inspected and adjusted as needed. Once checked over more test flights are conducted, landings and take-offs, the slower

flight handling is checked out. After every hour, and then every couple hours, cowls are removed and the aircraft is inspected for any signs of problems. After several days of flight testing, usually early morning and into the evening sunset C-IKIM had accumulated eight hours of trouble free operation with only a hose clamp to tighten on the Rotax 912 ULS radiator. 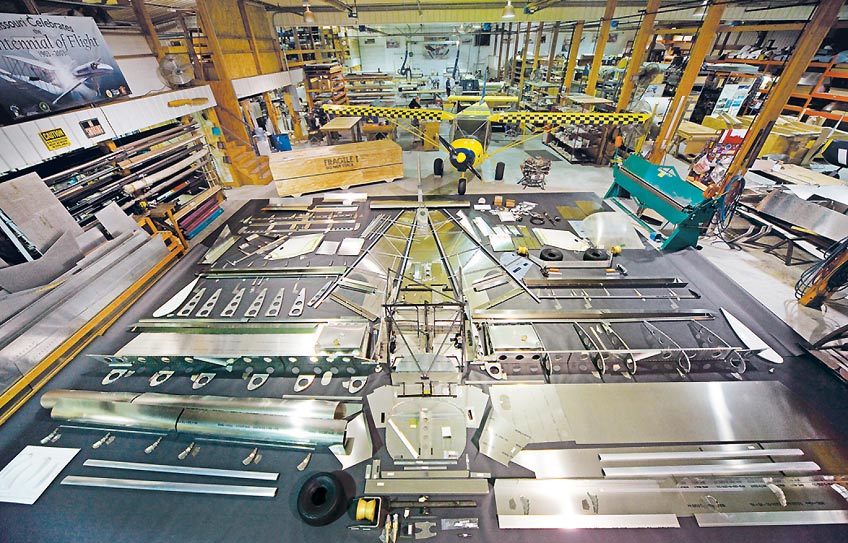 Above: Zenith Kit before and after seen here at the Zenith Aircraft Company in Mexico, Missouri.

As an Advanced Ultra Light Aircraft (AULA) C-IKIM is not bound to flying the first 25 hours within the 25-mile radius of the airport at which the first flight took place. I had been watching the weather and knew there was a two-day window of cool, clear “CAVU” weather moving into Ontario from the West. I planned to take advantage of the favourable weather and fly C-IKIM home from Kitchener.

The next morning found me flying a couple more hours of circuits at 7 a.m. Again the cowls were removed and the aircraft closely inspected, this time for the 240-mile flight home across Northern Ontario’s wilderness country.

My CH750 AULA carries a 121.5 ELT and a SPOT GPS locator. In “Tracking” mode it transmits my GPS position every 10 minutes and my flight can be followed in live time via Google Maps.

Other SPOT features allow me to request mechanical assistance or by pressing the “911” button transmit a help request direct to Trenton Search & Rescue alerting them to an aircraft in distress and my GPS location. Carrying a small survival kit provides creature comforts while a pilot awaits helicopter extraction in the event of a forced landing.

At 5:30 p.m. C-IKIM lifted off from Kitchener-Waterloo and headed North toward home. Climbing to 3,000 feet with 35-plus miles visibility I could see Toronto and the CN tower off my right wing, and the “Windmill Forest” of Huron Wind Power Generation off my left wing. With a power setting of 5,300 rpm the Rotax 912 100-hp hummed right along and the airspeed settled in at 95 mph, while the Bendix/King AV80R GPS indicated a solid 105 mph ground speed.

Tailwinds are always good and this one was pushing C-IKIM closer to home. As Lake Simcoe passed under the nose of CIKIM the terrain below took on a more hostile profile. 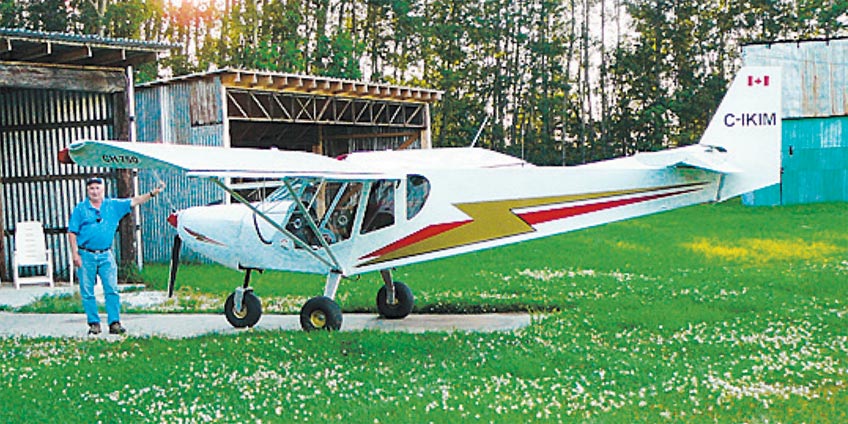 Above: Home at last

Gone were the patchwork fields of agricultural Southern Ontario, as were the roads and villages where a forced approach would be a non-event.

Ahead for the next 1.5 hours was Algonquin Park and a typical Northern Ontario bush. This is an area of trees, lakes and huge rock formations, swamps, bears, moose, wolves and swarms of hungry bugs… Not

even a decent place to crash, I thought while I admired the view from my cockpit.

The large bubble window doors, windshield wrapping around the dash and the greenhouse roof offered an unsurpassed view of the wilderness that surrounded me. The air was cool and smooth, at 4,000 feet CIKIM seemed to hang suspended in the blue sky over the dark green forests below.

The Bendix/King GPS reassured me of my steady progress, drawing a magenta line to show direction and the ETE counting down to arrival at home.

It had been 10 years since I flew this part of Ontario and it looked even more hostile than I remembered. Several times I lifted my headset to listen closer to the Rotax 912 ULS as it purred along oblivious to the danger below.

It’s funny how a part of me is awestruck by the rugged Northern Ontario wilderness visible only in this perspective by pilots yet balanced with the sobering knowledge that aircraft have gone missing here only to be found many years later.

I checked the SPOT several times… the double blinking lights assuring me it was leaving a trail of position markers. Again I removed my headset to listen to the Rotax.

Then almost as quickly as the knot in my stomach formed, I recognized the Bancroft Airport hidden in the mountain valley below. I was once again over familiar countryside that I had flown for years. It is still tough country for a wheel gear aircraft but I had roads and villages mixed in with the trees and rocks!

Above: The completed aircraft: It took eight weeks to build.

Soon I could see the huge pulp mill “highlighted” by the sun setting behind me. The mill sits on the Quebec side of the Ottawa River, across from Haley Station, Ontario. I lowered the nose of C-IKIM and trimmed for a long cruise descent, bleeding altitude for airspeed, as I headed for the Cobden Airfield. I dialled in the Cobden frequency and announced my intentions to join the circuit for runway 30.

The Cobden Airfield is a 2,000-foot main grass runway with the luxury of a 1,500-foot grass X-cross runway. This airfield has the POH textbook 50-foot pine tree obstacles on the ends of the runway that instructors refer to when they teach short field departures. As I banked onto final approach I could see my wife Kim waiting for me. I don’t remember the landing but my wife said, “I greased it.”

As I taxied in to hangar row Kim gave C-IKIM the thumbs up! Mark Townsend, my friend Ray Nash, and my wife Kim all followed my flight to home. The SPOT worked so well Mark commented “He could tell I was in a high speed cruise decent from 4,000 feet to the Cobden Airfield because my SPOT position markers were getting spaced wider as the airspeed increased”.

Now that both C-IKIM and I are home it is time to reflect on an amazing journey. I opened the “Big Wooden Box” Nov. 26, 2009 and started to build my CH750. I had signed up for the Can-Zac’s two-week Power build which had my STOL 750 on its wheels with engine mounted and all flying surfaces built. 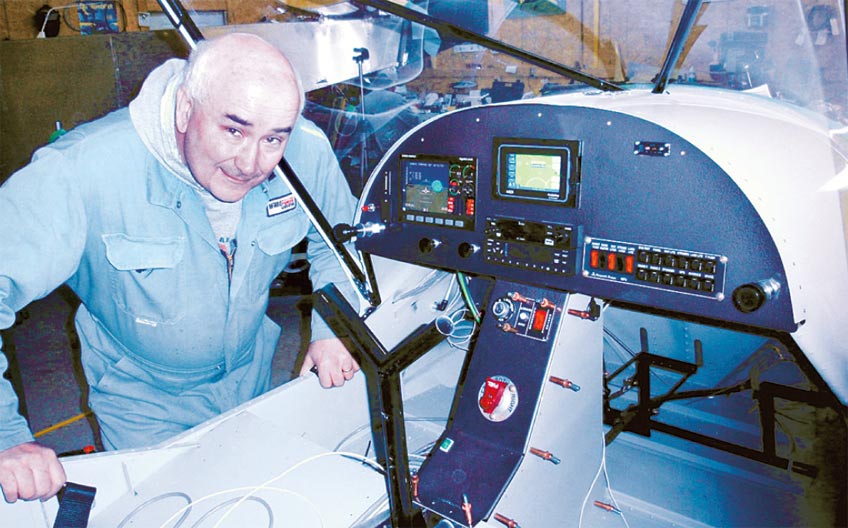 Above: Bob McDonald at the end of a long building day.

When I started this adventure I had planned on just the Power Build program and then I was going to take my plane home to finish it, after the first week I knew that the plane was going to stay at Hangar 41 until finished. With the abilities of Mark and his staff I was able to confidently choose an upgraded panel and many other options that if I were working on my own I would not have attempted to tackle.

I took Christmas, New Years and the month of February off from building. I still work a full time shift job. On my days off I drove to Can-Zac to work on the CH750. By the end of March the aircraft was finished, and finished to a point that really is done professionally. Sometimes it is the small things that make such a big difference.

Electrical systems in an aircraft are almost magic and I handed these off to Can-Zac to install for me, the routing of the wires, extra wire loom to ensure that the instruments can be serviced while sitting in the seats and not upside down reaching under the panel, the heat shrink on wire ends and area’s that I would not have paid as much attention to all come together as a whole to make C-IKIM look more like a production aircraft than one I built with my own hands. The paperwork to register CIKIM as a AULA in Canada with Transport Canada took an additional eight weeks.

I could not have completed the project of building and flying my own aircraft without the support of my wife Kim, and technical support of Mark Townsend’s Can-Zac facility. The folks at Zenith Aircraft make a CH750 kit that is an absolute joy to build.

One statement that I have repeated several times over the course of building my plane at Hangar 41 is I have never seen an ugly plane come out of this shop. It’s true, I have seen six planes built to finish during my time at the Can-Zac hangar and all have been an absolute tribute to the designer Chris Heintz.

With the building part now behind me I have to settle for the thrill of flying my CH750.