Here's my report of the 2019 Sun 'n Fun fly-in earlier this month (April 2 -  7) in Lakeland, Florida, with photos and videos of the trip to and from Lakeland from the Zenith Aircraft factory in Mexico, Missouri. Watch the videos for additional info (some with narration) and check out some of our Facebook posts of the trip and the event.

Listen in as Roger and Steve head for Florida in the STOL CH 750 Super Duty from the Zenith kit factory in central Missouri:

Flying cross-country is not just about getting there, but about the journey and the stops along the way. We've been making the trip to Florida for many years and we enjoy the trip. Zenith planes are great for personal transportation, and the flight getting there is often more memorable than the actual destination. We flew to Sun 'n Fun with three airplanes from the Zenith Aircraft kit factory in Mexico, Missouri: The STOL CH 750 Super Duty, the Zenith CH 750 Cruzer and the low-wing Zenith CH 650.

We left a day early for Florida because of incoming weather, wanting to stay ahead of the weather. Above, crossing the Missouri River west of St Louis shortly after our morning departure. Below, we see flooding around the Mississippi River in southeast Missouri:

Flooded properties in the Mississippi Valley between Kentucky and Missouri. I just love the bubble doors of the high-wing Zenith aircraft for the amazing downward visibility!

Flying high above the Tennessee River. While we normally fly relatively low (one or two thousand feet AGL) for a better view of what we're flying over, sometimes we'll fly higher to take advantage of tail winds.

Again, enjoying the great downward visibility thanks to the bubble doors: A dam on the Tennessee River (with a lock and hydro-electric power generation). 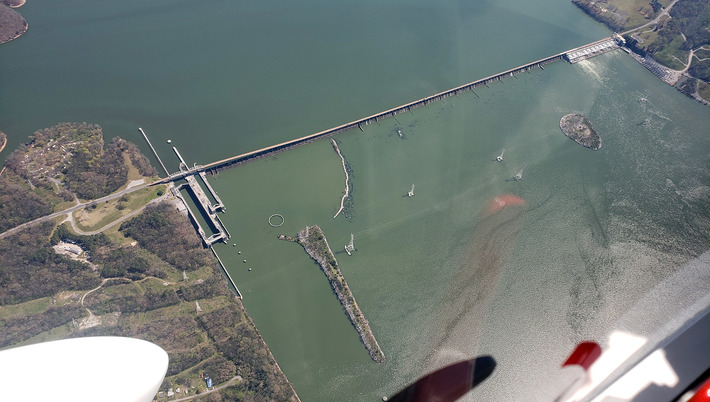 After the late lunch we continued flying south to Auburn, Alabama (KAUO) where we spent the night.

The next morning we were joined by brother Nick in the faster low-wing Zenith CH 650 (who had left Mexico, Missouri later the previous day) and the three planes continued south, stopping in Adel, Georgia (15J) for fuel and to visit with kit manufacturer Azalea Aviation.

After lunch we continued on into Florida, crossing the Suwanee River (below) Since we arrived in Florida early for the Sun 'n Fun Fly-In and Expo we stopped to visit with Herman and Amy Eshuis of Wheels and Wings at Massey Ranch (X50) in Edgewater, south of Daytona Beach

Since we were in Edgewater we had to visit the water (at New Smyrna Beach), even if just to dip in our toes: 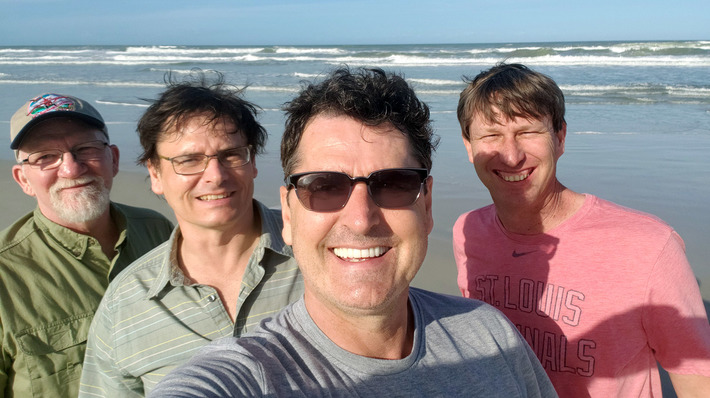 The following morning we decided to visit the nearby Kennedy Space Center at Cape Canaveral. I think many of us can relate to this quote: 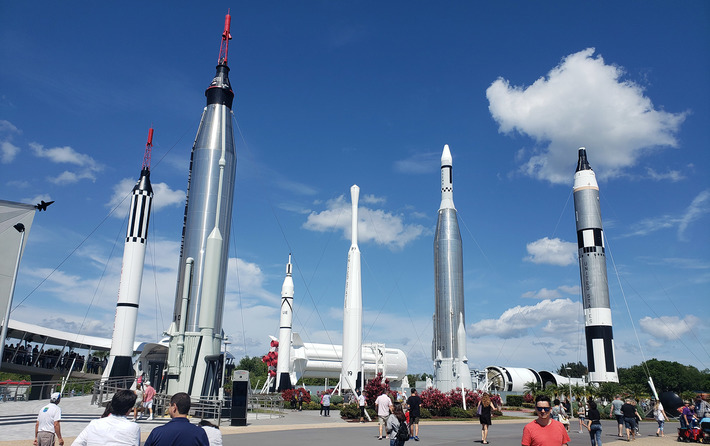 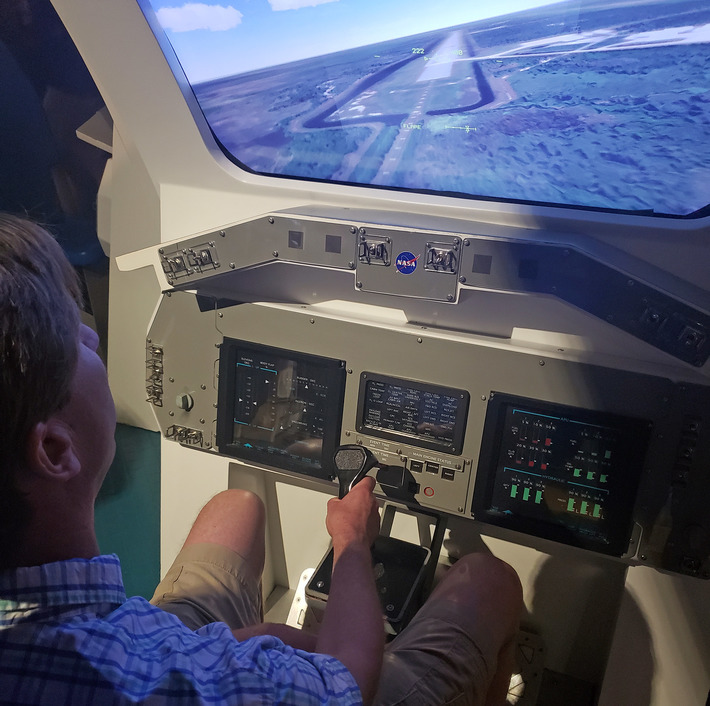 Back at Massey Ranch Airpark, checking out the Viking's STOL CH 750 Super Duty powered by the turbocharged 180-hp Honda conversion.

Flying by the Viking STOL CH 750 Super Duty on its way to Lakeland:

Below, listen in and watch as I approach Lakeland (KLAL) in the Zenith CH750 Cruzer to arrive at the 2019 SUN 'n FUN International Fly-In and Expo:

This was our office for the next week: Below: This Zenith CH 750 Cruzer kit (in the crate) will be built in the Buehler Restoration Center at Sun 'n Fun following the fly-in by the Aerospace Center for Excellence (ACE) and the Lakeland Aero Club high school flying club. The finished aircraft will be used (in part) to train future Able Flight pilots. ...read more 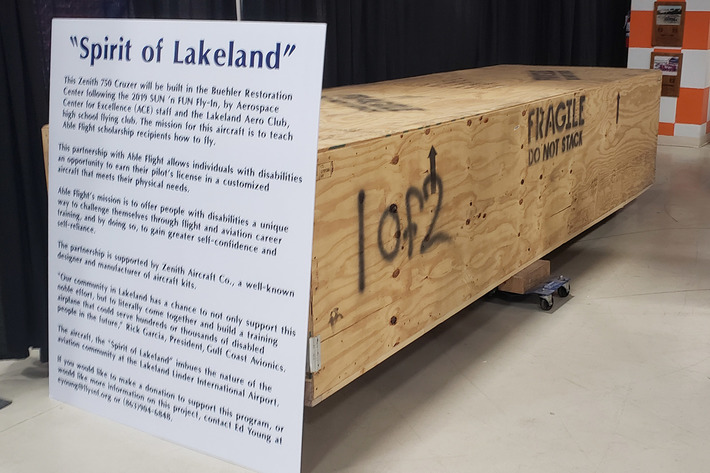 Checking out the crate in the Sun'n Fun Air Museum before the show: 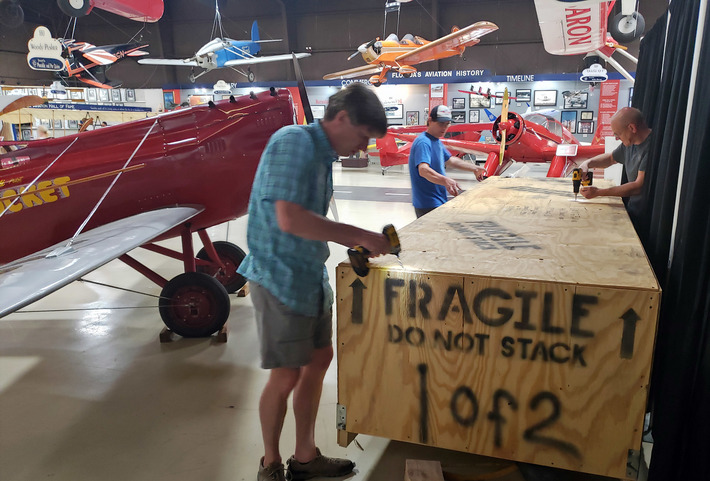 Lakeland Aero Club high school flying club members check out the crated kit that they will be building soon (photo by Andy Ovans): Video: Zenith Aircraft planes at the Zenith booth while the Aeroshell Aerobatic Team and the Blue Angels perform overhead.

Zenith builders and flyers were treated to a BBQ on Thursday evening hosted by the "alternative engine companies," some of the popular engines used in customer-built Zeniths. Thanks William Wyne (the Corvair guru), Robert and Ray (UL Power guys), Jan and Alissa (the Viking power couple), and Nick Otterback (Jabiru engines):

The SUN 'n FUN International Fly-In and Expo is always a good place to check out new technology and products for light aircraft. Roger checks out the Brazilian Motorav engine: 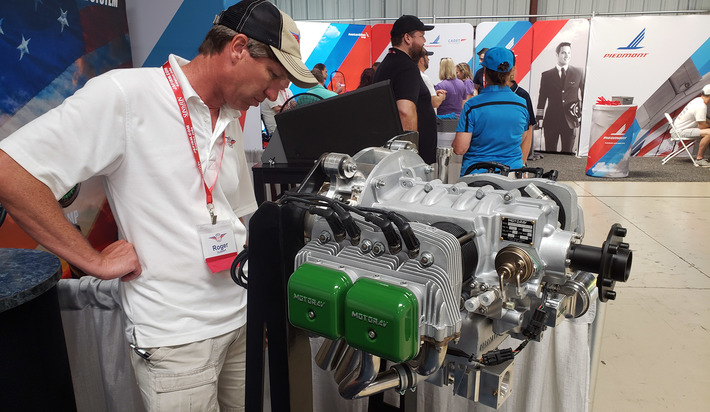 Free hands-on workshops and seminars at SUN 'n FUN allow visitors to learn more about building and flying their own aircraft: 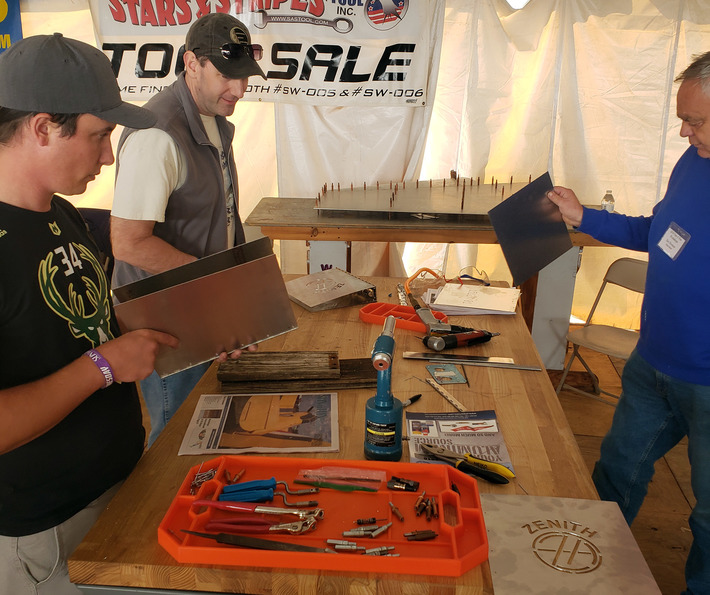 After hours, the Zenith staff being treated by locals. Thanks Mary and Mark for the outstanding hospitality! 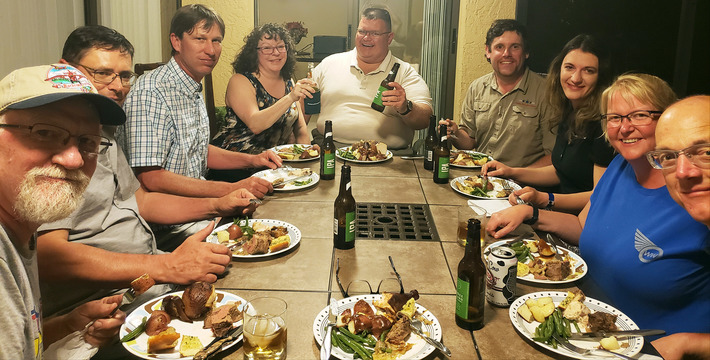 We were busy throughout the week and were ready to head home by Monday morning.
Below, watch the video taking off from Lakeland (KLAL) after Sun'n Fun 2019 and heading toward home. Roger and Steve in the Zenith STOL CH 750 Super Duty (with the UnPanel display).

We made a precautionary stop at Zephyrhills (KZPH) just north of Lakeland to check a rough-running engine that was quickly fixed thanks to support from UL Power and Herman Eshuis of Wheels and Wings. (We found a loose electrical connection to one of the fuel injectors.)

Overnight in Perry - Foley (40J in northern Florida) to wait out the storms:

Back in the air the following morning with scattered low clouds

We stopped in Early Country Airport (KBIJ) in Blakely, Georgia to wait out weather, walking several miles along train tracks to a local diner 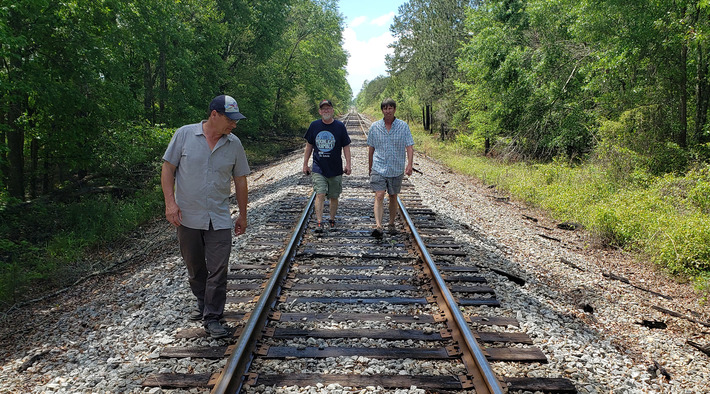 After our walk we resumed flying north, here at the dam on the Chattahoochee River in southern Alabama, south of Eufala (view video from the STOL CH750SD):

Enjoying the view, using my phone for navigation (running the Garmin Pilot app) and to take pictures:

Wide-angle view inside the Zenith CH 750 Cruzer cabin. Lots of space to pack for cross-country flights: 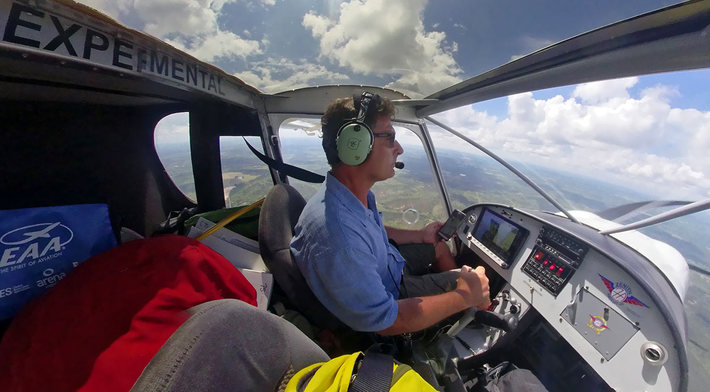 We stopped for the night at Savannah-Hardin County Airport (KSNH) on the Tennessee River, dining on local catfish:

Nice views of the Zenith CH 650 crossing the Mississippi River:

That was one awesome report Sebastian - Thanks for sharing :)

Great pictures!  I have also been stuck in Perry-Foley waiting out weather.  Talking with the airport manager I found out that he is actually a distant relative.

After a bit of troubleshooting we found that the rough-running engine was caused by an intermittently loose electrical connection to one of the fuel injectors. We were back on our way north within the hour :)

Wonderful pictures! Thanks for posting. I also would like to know what happened to the engine.

Looks like it was a good trip.  Thanks for posting.  BTW, what was the issue/fix with the rough running UL Power engine?  Cheers!  Dave