I was told that this was the wettest July in well over 100 years for the Oshkosh, Wisconsin area. Fortunately almost none of it fell during the EAA Airventure 2010 event. Unfortunately, it drenched the grounds in the couple of weeks leading up to it. I heard reports and saw pictures of areas on the grounds that were under 2 feet of water just a day or two prior to opening day. Still, it appears that most people made the best of it and were able to attend anyway.

My plan was to fly my Zenith Zodiac 601XL from Lebanon, OH (I68) to Poplar Grove Airport, IL (C77) early in the morning of the Saturday before and lay over for the night at my brothers house. My wife was to follow up with the kids and a pop-up camper. The stationary front that most recently beleaguered Oshkosh had not yet moved off to the southeast so it was a formidable barrier to my direct-to flight plans. As I approached Kokomo, IN, I called flight watch (122.0) and asked them about the clouds looming in front of me. Their first recommendation was for me to turn due north up into Michigan and cross over the “big lake” just north of Chicago. Although my airplane is certainly capable of a Lake Michigan crossing, I politely declined and asked about the possibility of finding openings in the approaching front and blasting through it. The forecast was for large breaks mid-day so if I could find a good place to land for a few hours it would help. As I approached the front, I kept turning southwest until I decided to land at Rantoul, IL (TIP) and wait it out. Rantoul is the former home of Chanute Air Force Base where about any USAF Airman who had a technical job received their systems training. At Rantoul I found four other airplanes awaiting a weather opening just like me. The airport is home to a nice aircraft museum primarily populated by airplanes that were used at the base for training purposes. At Rantoul with the museum in the background.

Once the predicted mid-day weather opening materialized up in the clouds to the north, we all made a break for it. The rest of the flight to Poplar Grove went pretty smoothly. Once there, I started to hear about the ground conditions at Oshkosh. The EAA web site told of campers being re-directed to hard pavement areas all over town and the airport being closed to almost all arrivals. We decided to scratch the planned early Sunday blast-off to Oshkosh. All was not a bust, though. While at Poplar Grove, I had the opportunity to brush up on my tail wheel skills in a newly rebuilt Cub with an 85HP engine. The skies were also filled with several airplanes coming back from the Brodhead Fly-in as well as those who also could not get into Oshkosh. Monday morning opened up with the same news of closures at the airport. Around 11am, the EAA website posted that they were open again, but only to show planes, no general aviation. Being a homebuilt, I immediately blasted off with my daughter, Rachel, on board and we headed due north. 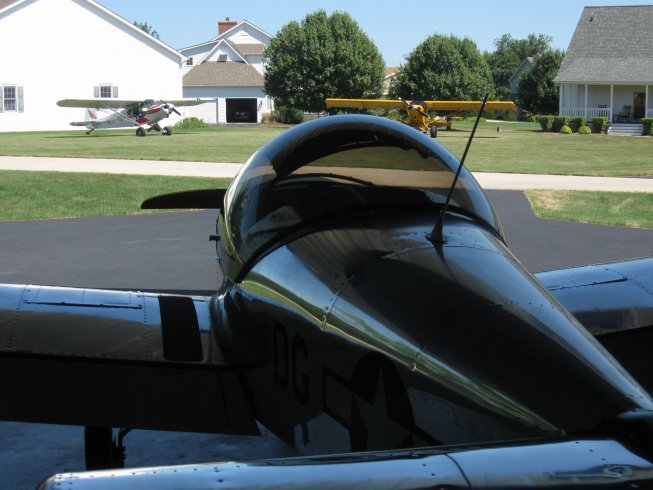 In my brother's hanger. It is quite a neighborhood!

With the 32 page Oshkosh NOTAM in hand we approached the initial Ripon rally point. With less airplanes being allowed into Oshkosh, there was not a large crowd and we easily found a place in line behind four other inbound airplanes and headed towards the next rally point, Fisk. At Fisk, I was directed north into right-hand traffic to land on runway 27. The most noticeable view as we approached the airport was the distinct lack of airplanes in the general aviation parking area known as the “North 40.”

On downwind for 27. Notice virtaully no airplanes parked around the runway. Very unusual for opening day Oshkosh!

The rest of the landing was pretty uneventful with the tower controllers asking all of us to land short and turn off onto only hard taxiways as soon as practical. Being marshaled over to the homebuilt parking area, I noticed another 601XL and asked to be parked next to it. As it turned out, it was Bryan Martin, who I had met in previous years at Oshkosh. Being from Michigan and with a lot of confidence in his Subaru engine, he did fly over the “big lake” on his way in. 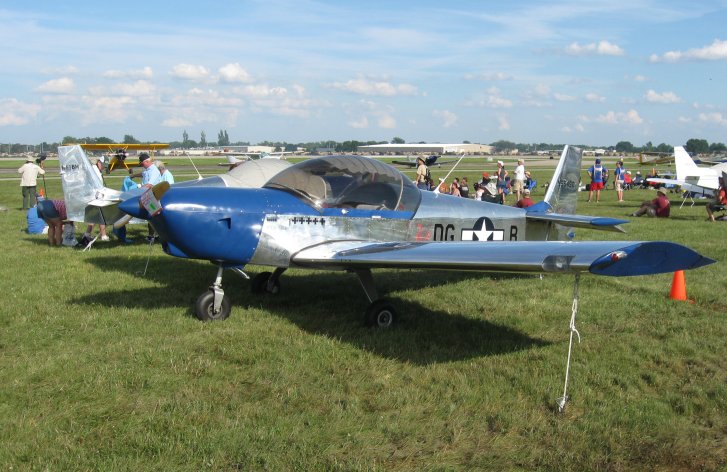 In homebuilt parking next to Andy Elliott's 601XL.

The week went by way too quickly. Every time I visited my airplane, I was met with fellow 601/650 builders and flyers. We traded a lot of stories and I tried to pass on whatever lessons-learned I could. The two most memorable Zenith events for the week were an informal Tuesday night gathering as well as the yearly Zenith dinner on Thursday. On Tuesday I met up with Ed Moody and his father Eddie, Tim and Joan Juhl, Bryan Martin, Ron Lendon, Patrick Hoyt and others whose names escape me. Being a Cajun, Ed brought a local sausage dish called boudin. Don’t even try to pronounce it, as you will most certainly get it wrong. It is, after all, a French/Cajun word. It was a fine evening to meet old friends, new friends and those I have only previously conversed with on the Internet. The Thursday Zenith dinner was also a great time. I won a door prize that is a disk containing electronic copies of the entire Zenith newsletter archives back to the 1970’s. A group of us had such a great time hanging around long after the dinner was over that we were basically pushed out the door.

I hoped all week that the final weekend weather forecast would be favorable and not push me into an early departure. It held true that there was enough VFR in the Midwest on Sunday to fly back to the Cincinnati area with my son, Mitchell (aka Cleco Boy). Some early morning fog caused me to hold off and not depart until around 0740 local time. In the mean time, I allowed myself to double and triple check my airplane considering nearly a week of time on the field with polite and some not-so-polite people hanging around it. I also had a short-term lapse of judgment and decided to top off my engine’s oil level. This move prevented me from flying non-stop all the way home to Ohio with advantageous north tail winds. 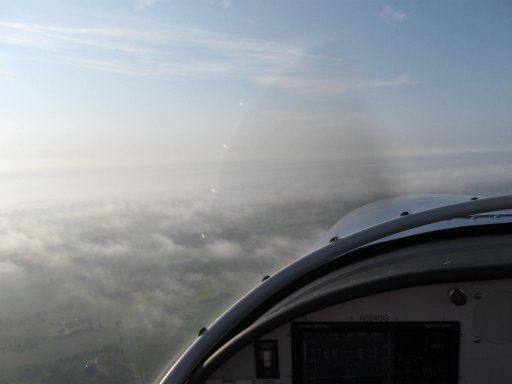 Oshkosh departure in the morning with scattered fog.

I have a Jabiru 3300 engine and I have seen it mentioned before that it likes to only be serviced to the lower half of the hash-marked area of the dipstick. Since my engine consumes very little oil, I have had no need over the past two years to put a lot of oil in and certainly not higher than half full. As I added some oil the morning of my departure, I had about a quarter of a quart of oil left in the container so I just decided to pour the rest in. Why I did that, I do not know, but it seemed safe to do. It’s only a quarter of a quart, right? Still just inside the upper hash mark, right?

Well, after taking off and climbing out from Oshkosh, I noticed that my oil parameters were not what I used to. Any day of the week, I usually see 50 PSI and temperatures between 200-215 degrees F. When I initially leveled off at 1300 feet as directed in the NOTAM, I was seeing 35 PSI and temperatures of 215F and climbing. A few minutes later I was still at 35 PSI (and wavering) with the temperature climbing through 230F. In front of me was increasing areas of ground fog. The nearest airport to the south was reporting 2 miles of visibility and 200 feet ceilings. I certainly was not going to do VFR over the top with any doubt in my aircraft. I had just passed Fond Du Lac (FLD), which is one of the Oshkosh reliever airports during Airventure and it was very much in VFR conditions. I radioed in that I was coming in for a precautionary landing and they held everybody up for me (thanks guys!). On the ground I pulled the cowling and could find nothing wrong other than a dip stick that was reading now a little over full due to hot oil expanding. After much pondering, the only thing I could think of was to de-service the oil to a level more in tune with past practice. I pulled about a 1/3rd of a quart out and got in line for takeoff. This time off, I was at a rock solid 50 PSI and 205F almost all the way home. Go figure. -->Pay attention Jabiru guys <--

The flight home was at a comfortable 7500’ over broken cloud cover on the autopilot. It actually got a little monotonous. I will take that over sweating engine parameters any day! 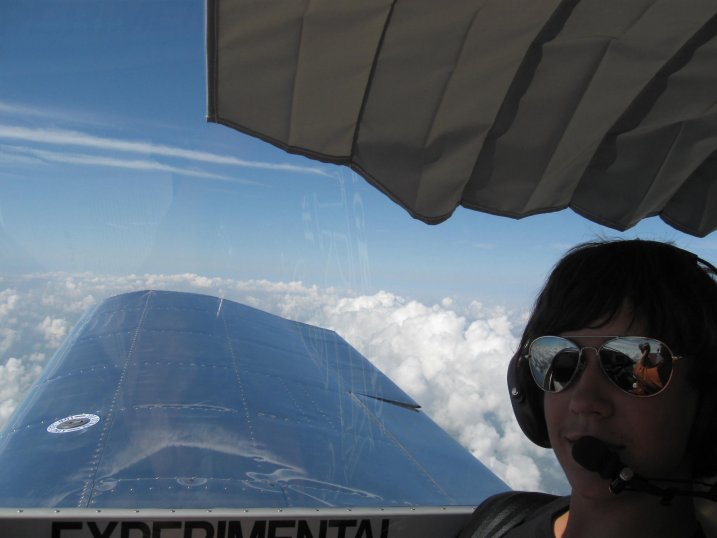 Cruising along at 7500' over puffy cumulus with my son, Mitchell.

My thanks to everybody I met, especially the Zodiac builders that are still working on their projects. Keep your chin up and get flying!

Comment by Tim Juhl on August 6, 2010 at 6:29pm
Glad you enjoyed the informal gathering in camp scholler. It was a good opportunity to meet other builders and exchange information. My mouth is still burning from the boudin - next time we'll have to tell Ed to bring the mild variety. I wish I could have stuck around for the builders dinner... maybe next year.

Comment by Dr. Edward M. Moody II on August 3, 2010 at 3:08pm
With guys like you adding to the 601XL fleet hours, the future looks fine to me Dave. You flying down to SERFI in Evergreen Alabama?

Comment by Sebastien Heintz on August 3, 2010 at 10:58am
Great post! It was great to see you, your wife, and your plane at Oshkosh!

Comment by Jake Reyna on August 3, 2010 at 8:09am
Dave, excellent blog! Thanks for the oil tip. Have you considered submitting to the EAA for publication?

Comment by Wiggy Greacen on August 2, 2010 at 10:07pm
Nice write up on your adventure. I really like the paint on your bird! Looks very cool.

I was in Oshkosh from Sunday July 18th until Sunday August 1st. My dad and I volunteered with the Fab Shop in South Maintenance before the gates opened. Long hours and trying times, but I'd recommend the experience to everyone.

All in all, Oshkosh was great fun. The rain and mud did not ruin the experience for my dad and I. it was my 2nd visit and my dad's rookie experience. We have agreed to go back for the rest of our lives.

I spent a lot of time going to lectures, forums, and training sessions. I wish I could have made the Zenith Builders Dinner. We could not arrange to borrow a car to get off site. Maybe we could organize a van or something next year.

Comment by Dave Roloff on August 2, 2010 at 9:35pm
David,
Thanks for taking the time and talking on Friday morning. I enjoyed it and got a couple great idea's from you.