Shakespeare and the Zodiac XL

At 17:53z this captain and the Admiral (Wife Rosalie) departed Santa Rosa for Ashland, Oregon. In no time we were there at 19:28z. We set cruise at 2650 RPM's and sipped 4.8gph at 5500 feet msl. We averaged 93 KIAS and about 19.5mpg. Total fuel used was 13.5 gal. to go 230nm/264smiles (I like spelling "statue miles" "smiles" because that's what we get along the way). The air was smooth the enitre 264 smiles route. We took some pix of Mt. Shasta and Castle Crags Wilderness Monument. We saw Lake Siskiyou from the air. It was exciting because we took the kids there every summer for camping for 12 straight years. At arrival we had a delectable lunch and later that night saw "Don Quixote" at the Shakespeare Festival. The actors there are unbelievable!

After breakfast the Admiral and I departed Ashland bound for Santa Rosa (home). We departed at 18:09z. We had a surprisingly smooth fly over the Shasta Mountains and again enjoyed the scenery, especially the camping memories of Siskiyou. We set Altitude at 6500 feet, but this trip I set RPM's at 2790 to see how we would do. We averaged 98 KIAS, but had a slight head wind and a lot of chop in the Mountains from Antelope Valley Reservoir to Cloverdale over Clear Lake. As recommended I backed off the power to about 2450 and rode out the bumps at 80-85 KIAS. The Admiral was a great passenger and kept reading her book as if nothing was bouncing. This trip we used 14.5 gal. to go the same distance. At the higher RPM setting we averaged 5.17 gph for 18.2 mpg. So, I learned that at 55%, 65% and 75% power settings, there will be some difference in gas mileage. Both trips took 2 hours and 20 minutes.

We were able to take 20 pounds of luggage and 28 gals. of gas and were still under weight by 10 lbs. It was very hot under the bubble on Saturday. I have closed off my naca vents because they blow too much air. I will work on a vent system so I can open and close in flight. We do get air on the sides of the canopy, but it was 68 degree F at 7500 feet, so on a hot day we need more air.

The Admiral and I both commented on what great fun we had, and what a great convenience this little airplane is. Last year it took us 6.5 hours to drive to Ashland to see Shakespeare. We just did an over-nighter because it only takes 2.4 by airplane at a slow and inexpensive pace. We spent less on gas flying than we did driving!!! AND, we got there faster. Thank you Chris Heintz!

Comment by Ron Asbill on October 30, 2009 at 11:03am
Next time you fly to Ashland let me know, were only 26 smile miles North of Ashland. We're based at OG31 Shady Cove Air Park. We can fly down and meet you or you can fly up and have some lunch! I didn't see your airplane at the last QSP fly-in.
Ron

Much larger "throats" to get you much more air. 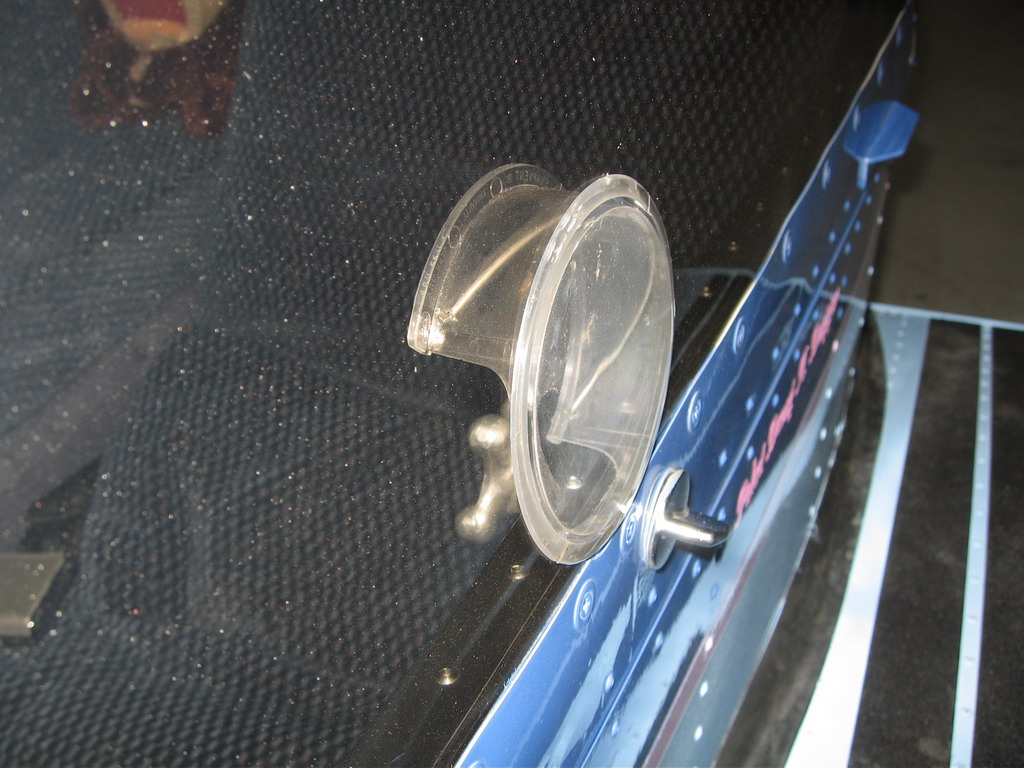 Ask Doug what he thinks of them. They also come in the current 701 doors I think (at least mine has them).

And lastly buy a Koger sunshade. His normal one are for RVs but he has built ones to order for the XL's canopy:

Comment by Dr. Edward M. Moody II on June 29, 2009 at 2:33pm
Great report Brad. Glad you and the brass had a good flight. If you do some searching on the net you will find eyeball vents that can be opened, shut closed or any position in between. That's what I put in the Goose but I don't recal right off where they came from. If it comes back to me I will send the link along to you.