Last week we hosted our first (and hopefully only!) "Oshkosh Week" at the Zenith aircraft kit factory in Mexico, Missouri. With the annual EAA AirVenture show canceled this year because of the COVID-19 global pandemic, we decided to open our factory to builders (and pilots) so that they could continue to "aviate" and work on their kit aircraft projects. We limited group sizes and activities to follow social distancing and other rules in effect at the time to protect both visitors and employees.

We streamed the building activities on Facebook Live and YouTube live, to allow and encourage visitors to participate from a distance. Justin Tisdale (aka Moosetache Flyer aka "Bruno") helped tremendously with online streaming and also in answering viewer questions and comments. Justin also worked on finishing his STOL CH 750 fuselage (which he trailered in from NW Arkansas), and worked on the control system, sliding seat (and more), and also demonstrated the Avilution glass panel that he is also now marketing.

Above, Justin Tisdale gets the video stream started as work begins on a fuselage assembly. Below, Justin arrives Monday morning at the Zenith factory with his mostly assembled fuselage in tow (with a Viking 130 engine installed on the front):

Monday morning, Todd Nuttall (from Arizona) starts assembly of his Zenith CH 750 fuselage kit. We had prepared all the fuselage kit parts on the shop floor, ready to get started: 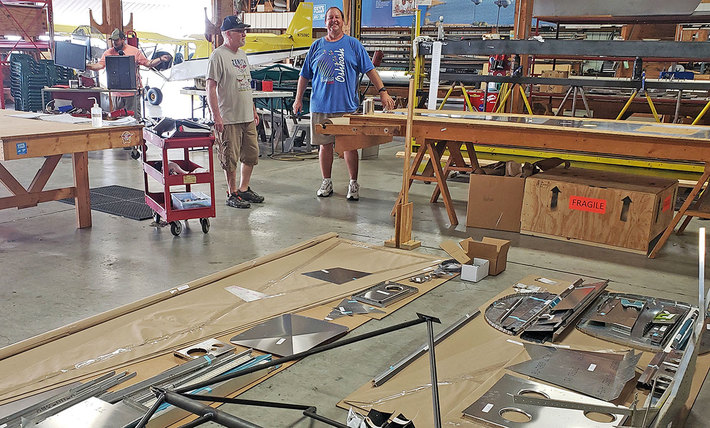 Todd started building his STOL CH 750 ten years ago, completing the wings and tail sections, but for personal reasons was forced to put his project on hold until now. He was ready to jump in (with help from several builders who dropped by to look and lend a hand). "When I started my project, the kit included full 'match drilled' components which made alignment of parts very easy. I simply had to drill to final size and prep for final assembly. Now the same kit is improved to not simply be 'match drilled' but also 'final hole size', so I'm able to go directly to the final assembly! I was able to complete the entire rear fuselage with less that 20 hours of effort!"

"I'm sure there are a lot of builders like me who had to set their projects aside for several years, but wish to return. After just a few hours with the staff at Zenith, I've cleaned the rust off my builder skills and am confident I can complete a very nice airplane," states Todd. "After a few hours of 'skill refreshing' at Zenith, I'm confident that I can complete my project even after many years of dormancy."

Below, my son Calvin lends Justin a hand working on the STOL CH 750 control system on Justin's fuselage: 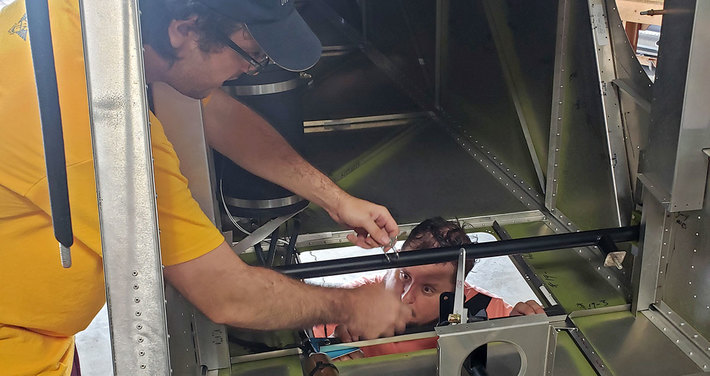 We even had the chance to take up first-timers up for demo flights!
Zenith demo pilot Roger loves taking passengers up flying for their very first time: Watch the video where he takes Karly up for her first flight in a light aircraft. Her dad, Eric, is building a STOL CH 750 from a Zenith kit. Rick and Ella Crawford flew in on Monday from Iowa to lend a hand and check out the projects in the factory. Rick built this beautiful CH 650 (powered by a Lycoming O-235) and loves to fly cross country with it with his wife.

On Thursday I was invited to be a panelist for the EAA Spirit of Aviation Week Homebuilt Panel Discussion where kit aircraft industry players discussed how our industry has been affected by the coronavirus pandemic.

Below: Installing the horizontal tail sections to Justin's CH 750 fuselage. Christopher Ward (at right) came by from St. Louis to work on his CH 750 Cruzer tail.

Justin's CH 750 tail sections. Can you tell the difference here? 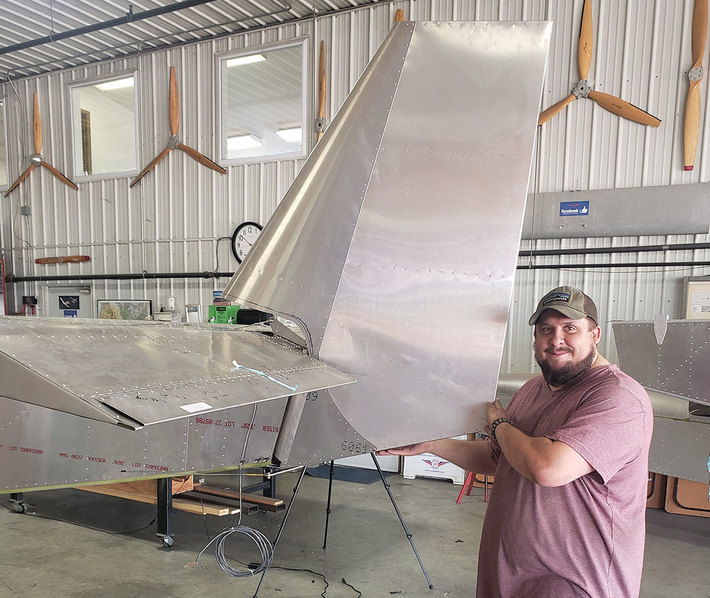 Assembling the sides of Todd's CH 750 fuselage: "Having Steve, Roger, and others walking by and looking over my shoulder gave me confidence that I wouldn't make mistakes in moving forward with my project.  There were several times where they provided welcome advice on how I might do a task more effectively."

More hangar talk and camaraderie.
When asked about his week at Zenith, Todd said "I still have very sore cheek muscles from an entire week of smiling!  The tactile pleasure of working with aluminum to build an airplane, coupled with the pleasant interaction with the fantastic people of Zenith made it a week of pure joy!" 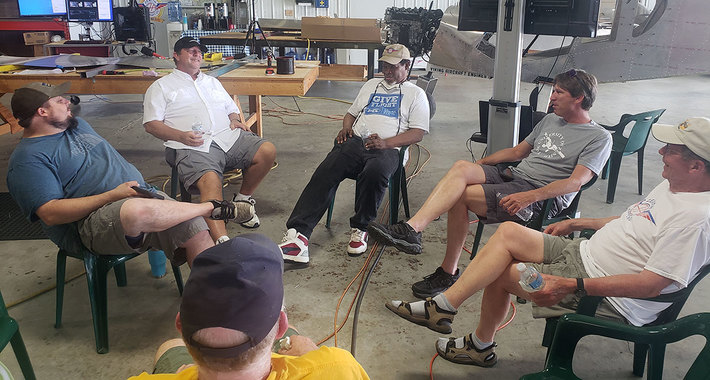 On Thursday we hosted an "engine forum" discussion for our online viewers, with guest participation from Justin Tisdale (about his Viking 130 engine) and Robert Helms (the UL Power guy): Clint Gosch flew in his beautifully-built (from scratch!) STOL CH 750, powered by a Continental O-200 engine, that he flew in from Iowa. I'll post a walk-around video of his plane soon.

On Thursday evening, the night that the "Zenith banquet" is traditionally held every year at Oshkosh, we decided to fly out to dinner with a few Zenith planes and friends. Below, three Zenith planes and six hungry pilots at Mexico airport:

It was a beautiful evening flight, over the Mississippi River, for dinner in Quincy, Illinois. We switched passengers to give them the chance to experience the CH 750 Cruzer and the STOL CH 750 Super Duty. Todd says "after spending time around both the Super Duty and the Cruzer - and even being able to fly in both aircraft models when Sebastien invited me to join them for a flight to dinner in Quincy, Illinois - I felt that the CH750 STOL was still the right airplane for me (even though both the Super Duty and the Cruiser were fantastic!). This gave me confidence to continue to invest in finishing my CH750 STOL project"

Dinner at the airport diner in Quincy, Illinois. We were joined by two more planes full of Zenith builders!

Jim Davis and his wife flew in their beautiful CH 650 taildragger to join us for dinner (the restaurant is the building in the background):

What a great time we had flying to Illinois and back! Check out a few more flying pics: As part of EAA's "Spirit of Aviation Week" I presented a webinar on "Building Your Own All-Metal Plane" on Friday evening (to an audience of about 350 online participants). I love to share how building your own airplane is often such a very rewarding experience, and I discussed the advantages (and disadvantages) of building your own airplane, with an overview of the costs, time, skills, workshop etc. needed to successfully build (and then fly!) your very own airplane. Like with most of my presentations, I quickly ran out of time!

Rick and Ella Crawford came back on Friday to visit again and to join us for lunch :) 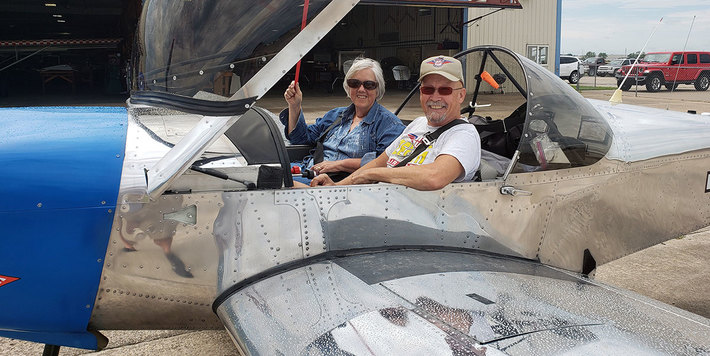 Still full of energy, Todd finishes the rear fuselage assembly of his STOL CH 750: "At Airventure 2010 my wife and I made the decision that the Zenith CH750 STOL was the right kit plane for us. I went to the Zenith factory in September of 2010 for the Rudder Workshop and ordered the Tail Kit along with the Flaperons and Slats kit. After completing those I ordered the wings and fuel system kit. I completed those and then 'life got in the way' and my project had to be moth-balled for many years. I even debated abandoning the project. A return to the Zenith Factory quickly restored my confidence in the project and now I'm well on the way to completion. I'm so glad I went back to Zenith for a visit!" 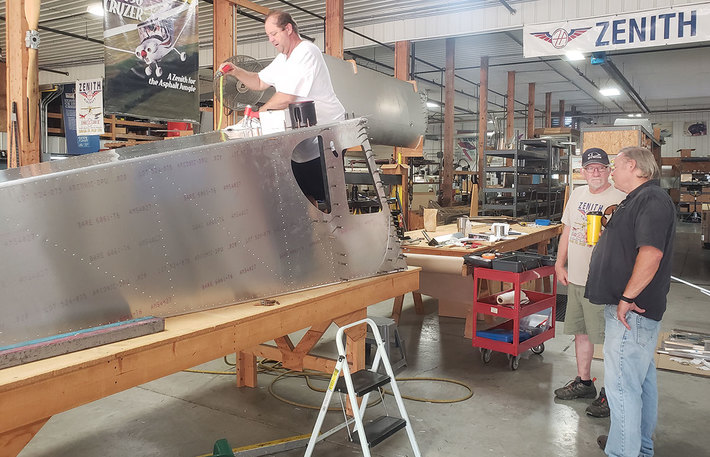 More planes came by Friday to visit us for lunch: Brats and ice cream!

Waiting on lunch, expertly prepared by our airport manager Jay :)

We had a good "Oshkosh Week" at the Zenith Aircraft kit factory, but we are ready already for Oshkosh 2021! We hope to see you there! #OSH21

Thanks to all who participated (in person and virtually) at our "Oshkosh Week" and thanks so much to all who helped make this a good week in the true "spirit of aviation."