I usually try to work some sightseeing into my trips. I love to fly in the mountains and along rivers. I have spent many hours doing so in the west. This year my idea was to follow the Missouri River from the headwaters in Idaho all the way to the Mississippi River then head up to Lake Michigan, past Chicago along the lake-front, and then on in to OSH.

With that plan in mind I flew the first leg of the trip from Santa Rosa to Driggs Idaho.  Thanks to a nice tailwind up at 13,500 feet, this was a non-stop flight of 718 SM in just under 6 hours. So far, so good; however my trip plans started to unravel as I descended into the right downwind to land runway 21 at Driggs. The engine would not run at a reduced throttle setting. I got the plane on the ground, parked it and planned to deal with the problem after a good night’s sleep.  In the morning I found that the engine started just fine but would not idle without the “choke” on. The FBO in Driggs was very helpful and provided an area in their big repair shop where I could work on the plane, out of the sun.  I got to work.  I suspected a vacuum leak and spent a good deal of time looking for it to no avail. Finally I decided to remove the carburetor for a full inspection.  As I started that task I discovered that the carburetor’s slide was stuck in the full open position.  A bit of carburetor cleaner fixed that well enough. The engine once again ran as it should but the day was blown so I stayed in Driggs another night. 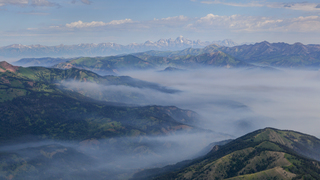 abandon the River trip idea and headed more-or-less direct to Oshkosh. Off I went, heading for Sioux City Iowa a distance of 610 SM. The day was uneventful but there was weather ahead. To the north east was a weather front, headed for Oshkosh.  One and a half inches of rain were expected to fall the night of my planed arrival.  Since I was going to camp on the field with my airplane, I decided to delay my arrival to avoid camping in the rain.

The next morning I left Sioux City and flew along the Missouri River upstream away from my destination to kill off a few hours so that I could come into my next stop, La Crosse Wisconsin, behind the weather front.  At the end of the day I landed on a wet runway but missed the rain as planned. Sure is nice to have live in-airplane weather information.

The next morning, it was MVFR all the way into Oshkosh. The not-so-great weather had one benefit: it kept the hordes of airplanes away so the Fisk arrival was not all that hectic for a change.  I landed runway 18. Soon after landing, my airplane was parked in home-built camping and I had my tent pitched right next to my airplane. I had made it! It was Sunday morning, the day before AirVenture officially started.

My plan was to spend the entire week exploring AirVenture and taking pictures and Videos. AirVenture is a great place meet friends, talk to hundreds of vendors who sell anything and everything, and attend forums where you can learn new skills and hear of new travel experiences.  Weather permitting, there is an airshow each day. Some evenings there is a night airshow complete with amazing fireworks.

About 10,000 airplanes fly in and out of AirVenture during the week.  There are several active runways, the longest of which is 1.5 miles long which accommodates very large aircraft. The variety of aircraft to look at is mind blowing. There are airplane folks to talk to everywhere. The show is attended by about 500,000 people each year.

As I walked the grounds, I often had my portable radio with me tuned to one of the tower frequencies. I enjoyed listening to the controllers while watching aircraft land and take off. The AirVenture grounds are very large. I estimate I walked 20 to 30 miles during the week.

I left for home Sunday, the last day of the show, with hundreds of pictures and hours of video in my camera.  After many days of review and cleanup the pictures have been uploaded to the web where you can view them if you like.  They are split into 4 folders.  Here are the links:

The trip to OSH

I edited the hours of video down into a single compilation that is 50 minutes long. You can watch it using this link.  Keep in mind the video was taken without benefit of a tripod and I am no video pro.  Still, those who have seen it so far seem to enjoy it.  Set aside some time, grab a friend and a beer and “attend” AirVenture without attending.

The trip home was uneventful but I did set a couple of new personal records. I flew home in one day.  It took 18.6 hours not including three 20 minute fuel stops.  The last 6.5 hours were non-stop and because the sun set as I flew across the 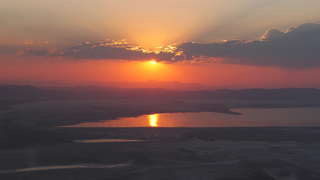 Great Salt Lake, most of the leg was at night. I arrived at my home airport at 1:15 in the morning. It and all the other local airports were IFR.  I diverted about 50 miles to the north and landed in Ukiah at about 2:00 AM.  After landing, I was a bit tired, so I pulled my pillow and sleeping bag out of the back of the airplane and slept in the plane for 6 hours bringing my total time in the airplane to just over 24 hours.  Good thing the seats in my 601 are super comfortable.

Great Video, thanks for sharing!   I could almost smell the Porta Potties:)

I love it! and HD too! I got out the VR glasses to watch this, worth every minute of the 49 minutes.

Excellent adventure! I hope someday to be able to have good times like that in my Cruzer. I guess I better get started building it! :-)

If there was an Iron Butt flying association for airplanes as there is for motorcycles, you are definitely in the club.  I can't imagine flying for 18+ hours in a day.  It sounded like another great adventure and thanks for sharing.

I am guessing you saying it was simply debris that locked the carby slide at full open?  I have checked its movement and sprayed some carb cleaner on it at the annuals and never saw an issue, but I don't have near the hours that you have.  It's good to know and I will be eyeing it closer at the next inspection.