What a week Oshkosh was this year!!  I arrived at Whitman Field on the Saturday afternoon preceding the start of Oshkosh 2011.  Since this was our big “Zenith’s To Oshkosh” year, there were already several Zenith aircraft in the three rows of homebuilt parking earmarked for our types.  I parked my 601XL between Andy Elliott’s 601XL TD and Al Beyer’s 601HDS.  For a few days Matt Archer’s 601XL was parked right behind me.  During the week, aircraft came and went, but at the height of the show, I believe I counted around 22 Zenith’s there at one time.  I am interested in what the final Zenith count ended up at, including those in the homebuilt camping area.  It had to get close to the 50 we all hoped for.

Just some of the parking area for Zenith aircraft 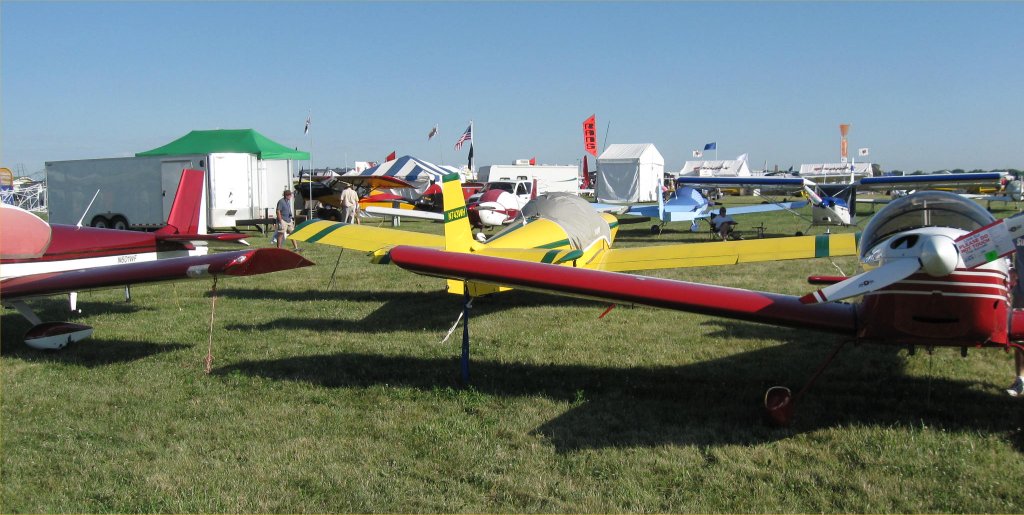 Two CH 601 HD’s.  Dennis Hutchinson from Indiana standing next to his on the right.

Matt Archer flew in from Wichita.

With opening day Monday also being “Chris Heintz Day,” things got off to a quick start.  I had never met Chris before and I first ran into him while he was admiring Geoff Alexander’s  4-place CH640 parked a few spots over from me.  It was the only 640 I have ever seen and was a real beauty.  Several Zenith builders and fliers milled about the area making new and reforming old acquaintances (Patrick, I expect to see you fly yours in next year!).  Around the time we were to head over to the Conoco-Phillips Square to honor Chris, Roger from Zenith Aircraft came up and asked if I would be interested in flying in the Zenith showcase fly-by’s later that afternoon.  Of course, I said YES!

Several Zenith aircraft were chosen from our ranks to be pulled to the Conoco-Phillips Square for the presentation.  They formed a nice side drop around the small stage set in the square.  The EAA presented Chris with a nice trophy honoring him for his efforts to the homebuilding hobby.  Both Chris and Sebastian spoke about the design premises inherent in all Zenith offerings. 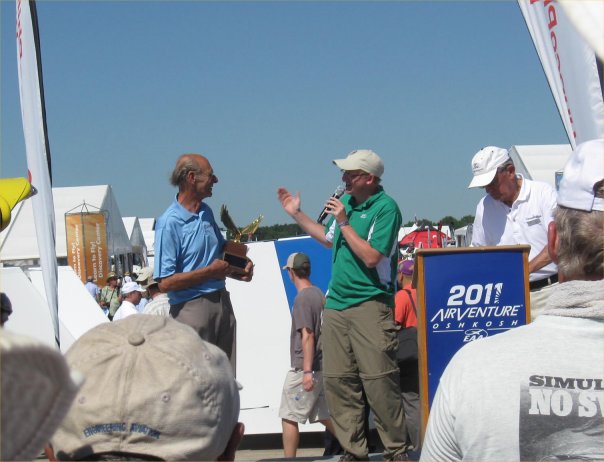 EAA Trophy presentation to Chris for his homebuilding design efforts

Later that afternoon, Chris presented a forum where he went through a chronology of his life and the various Zenith designs and related businesses.  It was nice to see how family oriented the Heintzes are, showing his children growing up during successive years at Oshkosh.  We found out later that Sebastian met his future wife at Oshkosh when they were both still teenagers. After the forum, myself and the other four Zenith fliers chosen to fly in the showcase went to the Charlie Hilliard Briefing Building to get ready for the flight.  The EAA Air Boss gave us a thorough layout of the local airspace, flight line restrictions and frequencies for all the air show pilots.  Our showcase flight is basically just several in-trail passes before the crowd line in a pattern-sized rectangle.   We were to go on after the “Bonanza’s To Oshkosh” formation demos and before the Honda Jet demo flight.  After the brief, the Air Boss let us talk amongst ourselves and determine the order in which we would fly.  Fortunately, 601HDS pilot Al Beyer is not only based at Wittman Field, he has also flown a showcase before.  He was immediately elected as our Lead Pilot, call sign, “Zenith 1.”  The 640 was #2, I was #3 in my 601XL, a 750 was #4 and a 701 rounded up the field as #5.  About 15 minutes before our prescribed flight we started up and taxied to papa-4 taxiway on runway 36.  It was a bit breezy with an 8-14 knot quartering tailwind.  Since we arrived at our spot a bit early, we all shut down and watched the Bonanza’s fly over us. Awaiting our turn to fly in the Zenith showcase flight

When our turn to fly came I was immediately in awe of the sight of the Oshkosh flight line and crowd of spectators.  I wish I had a remote camera mount to be able to share the view.  Since this was all business now, I had already turned the camera off and stowed it before departing in order to hold off the temptation divert my attention and snap pictures.  The showcase flight went off very well.  After the first circuit, Al noticed he was catching up with the tail-end 701 and adjusted the pattern accordingly for the next circuits.  Flying in front of the Oshkosh crowd was an awesome experience and before we knew it, our flight was called back to land by the Air Boss.  One somewhat humorous discussion ensued between the 701 and the Air Boss.  The 701, in asking for clarification, wanted to know if he was cleared for one final pass or if he was to land on the present circuit.  We all know how slow the 701 can fly, and obviously the Air Boss found out during the showcase flight.  The Air Boss’s response went something like this, “Son, if you make one more pass, we will be waiting until tomorrow for you to land. Please land now.”  I don’t know how the quartering tailwind affected the other pilots in our showcase but it sure caused me to do a dance with the controls those last few feet.  This flight was the absolute highlight of my week….and it was only Monday!

The rest of the week flew by, literally.  The Tuesday talk by Chris in the Homebuilders Hanger went over various Zenith design features.  Myself, and most Zenith builders, are probably pretty well aware of many of the features Chris spoke of and my biggest take-away from this discussion was that Chris has a sly humorous streak.  Never having met him or heard him speak, I was drawn in by his unique dead-pan sense of humor. Wednesday was the Zenith Dinner in a large EAA Nature Center tent.  Despite the hot weather at Oshkosh, I was glad to not be stuffed into the Robbins Restaurant again this year.  Paul Poberezny gave a nice talk about the parallel of EAA values and his reminiscences of Chris.  Chris then regaled us with a few of his many Oshkosh memories.  Until his last trip there a few years previously, Chris had made 34 straight Oshkosh appearances.  Sebastian’s son, Calvin, had the pleasure of escorting his grandfather around Oshkosh all week.  It was nice to see a third generation, and a fine young man, with some aviation and engineering interest.  My final moment with Chris was a visit to one of his book signings.  I was the only one there at the time and got to spend a several minutes speaking with him.  Many thanks go out to Joe Scheibinger for taking the lead on this event and making it one of my most memorable years ever. 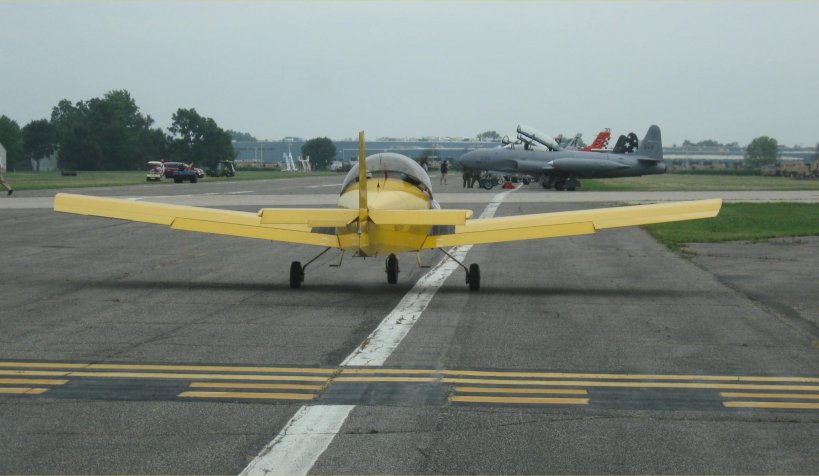 I volunteer in the Warbirds area and just before the air show around mid-week, I ran into this 601XL that was one of the last to land just before the field closed up.  The hapless pilot was stuck in between the departing showplanes for a few minutes.  I was also stuck behind him trying to drive my firetruck across the taxiway.

The last day of the show came all too quickly.  I had been eyeing Sunday as a good day to depart for home.  We had a nasty storm front blow through the middle of Saturday’s airshow, but the following cold front was still a bit behind it a ways.  The day dawned to clear skies at all points between Oshkosh and Cincinnati, Ohio.  I decided to follow the VFR corridor along the Chicago/Lake Michigan coast and was not disappointed by the fabulous views of the skyline.  3 hours and 35 non-stop minutes later I landed at my home airport. Chicago skyline during my return flight to Cincinnati, OH

The total flight time to and from Oshkosh for me was 8.5 hours.  I was able to spend about 7 of those hours on auto-pilot.  My new iPhone was a great aid in spotting breaks in the weather.  Unfortunately I was not able to get enough signal in the air to generate in-flight weather maps, but I got quick updates while on the ground.  I was fortunate to have a lot of good weather this year in-between some nasty storms.  The biggest issue I experienced was flying a few of those hours in stifling 94F heat.   Regardless, I am already looking forward to Oshkosh 2012, only 350+ days away.

Comment by Kay C. Caldwell on August 5, 2011 at 8:48pm
Great pictures,  I wasn't able to attent Osh this year but will be there for sure next year.  Post more zeniths if you got em!!!

Not to worry about having pictures of the Showcase flight David, I had my dual channel video camera system running for the whole thing.  You can't see much of the other planes after takeoff but it is possible to see everything in the area on the outside camera.  The inside camera gives the impression of sitting in my right seat, radio chatter and all.  I have the videos on a thumb drive that I will be sending to Jon Croke for inclusion on the upcoming Newsletter DVD.

Great post, David. Thanks for watching my 6 as we flew in the showcase. Hope to see you again next year.

That was my yellow 601XLB stuck in taxi traffic, nice to see it from that perspective

Comment by Tim Garrett on August 2, 2011 at 6:26pm
Dave, great stories! I saw your plane and saw you fly but didn't get to say hi. We had to leave wed so I missed the dinner. It was a good time!

It was great to finally meet you.  Too bad the weather was moving in or I would have stayed longer.  Had a great flight back though.  Thanks for the great post.