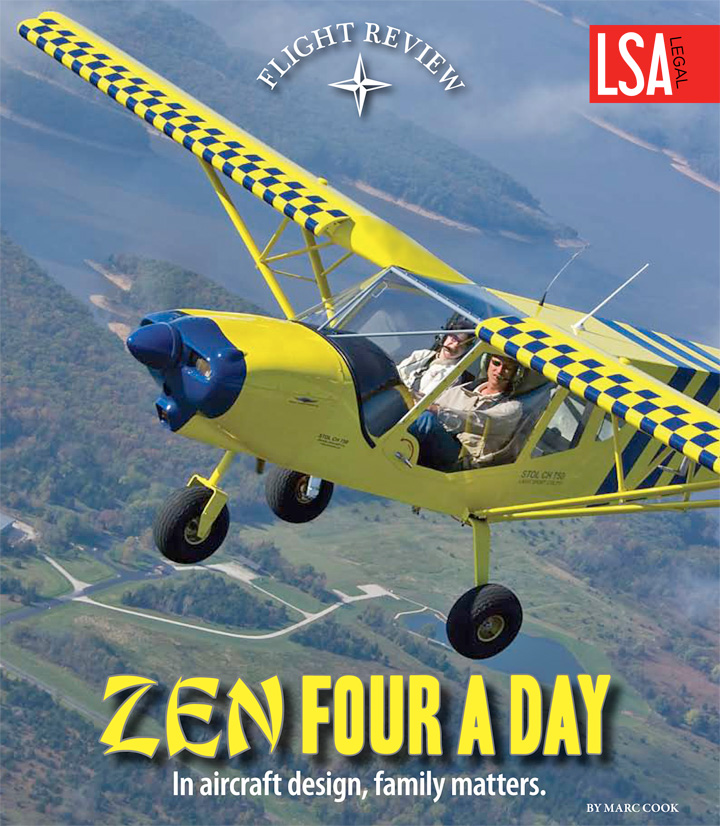 
"Chris Heintz penned his first design in the late 1960s, with the initial example flying before the decade was out. From the beginnings of Zenith as a kit manufacturer in 1974 to now, the number of airplanes that are either his alone or that include his efforts in consultation number more than a dozen; currently, four designs are offered as kits from the Mexico, Missouri-based Zenith Aircraft Company, run by one of Chris's sons, Sebastien Heintz.
"All Zenith designs...carry the stamp of a designer who values low stall speeds and sprightly runway performance over raw speed. Moreover, the design ethic here leans massively toward simplicity and ease of construction." 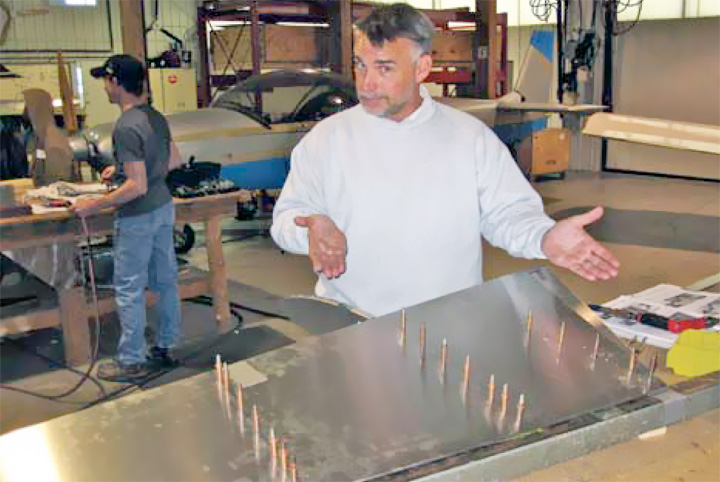 "While I was tossing Clecoes around and popping rivets at the Zenith factory in the process of building a rudder at a recent two-day workshop, four demonstrator aircraft were made available. It's unusual for a visiting journalist to have the chance to fly a veritable story arc of a company's designs, in part because so few kit makers keep a raft of demo airplanes around. Heintz was eager for me to try the four aircraft stationed at the factory: A STOL CH 701, a CH 750, a CH 601 XL/B and a CH 801 four-seater.

"In case you missed the family reunion, here's a primer to help you recognize the quartet. The CH 701 is a high-wing utility aircraft first sold in 1986 and intended to be useful with as few as 50 horsepower. The CH 601 is the company's low-wing offering that is now well developed in the form of the CH 650. (The firm was in the process of building a CH 650 demonstrator during my visit; those long Missouri winters will help keep the factory boys focused.) The CH 801 is a 701 with a glandular problem-its four seats follow a Lycoming O-360 through the air and hang beneath a thick-airfoil wing with fixed leading edge slats and full-span flaperons-ailerons and flaps that are set below and behind the trailing edge of the main wing. Finally, the CH 750, as the newest member of the clan, represents the family's latest thinking in a two-seat, high-wing utility aircraft."

On take-off in the STOL CH 701: "Count to three, quickly, and the 701 is airborne, clawing for pattern altitude at a ridiculous deck angle. In fact, this is the most disconcerting part of the flight. For this impression, thank all of those high-lift devices ...it's an impressive sight from the cockpit.
"Cruise flight and maneuvering trails showed no unusual traits. The stall, when it comes, is far more of a straight-ahead mush, with the stick far, far back-you might look like you're reaching into the baggage compartment for a soda, it's that far back."

Flying the four-seat STOL CH 801 utility aircraft: "Even though the 801 is clearly heftier than its two-seat brother, it still has the feel of a light aircraft."


CH 601 XL B low wing cruiser: "Climbing out of the 801 and hopping into the CH 601 XL B is a bit like leaving the rental-car shuttle bus to find a sleek sports car with your name on it."
"The CH 650 is the most advanced version of Zenith's low-wing clan; it features a taller canopy and revised aerodynamics." 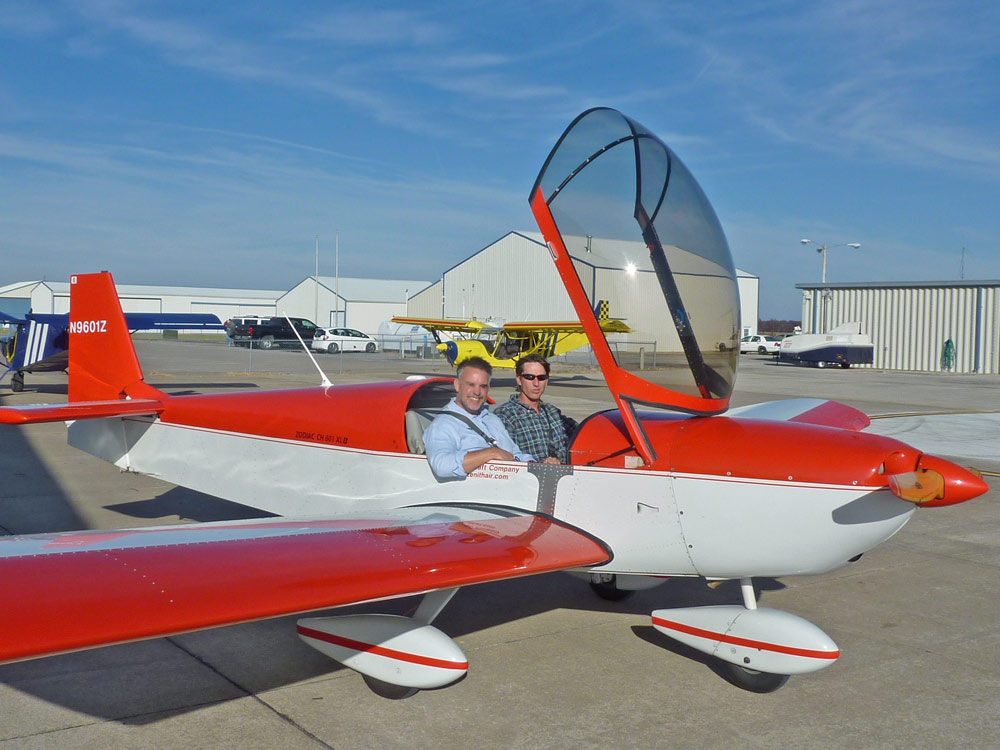 About the STOL CH 750 light sport utility aircraft: "As the latest design, the 750 should be the best developed, most mature of the bunch, and it is."
"The CH 750 has a much larger cabin than the 701, while maintaining nearly the same performance on similar power. The CH 750's cabin is much, much roomier, a fact embellished upon by the great visibility. Bubble doors afford a peek straight down, while the cutaway at the corners of the instrument panel give you a sliver of the lower outboard corners of the windshield to see through. I didn't think much of that feature until the first solo takeoff."

To take-off in the STOL CH 750: "The process is to throttle up with the brakes on, release, begin to think about counting to two, and then hike the nose up. Pop... the 750 is off the ground and climbing at an obscene angle, with full control authority and the sensation of ample lift in those thick wings."
"So much about the CH 750 struck me as being just right for the mission. The enlarged cabin is a real boon. It has good payload - max gross is the LSA legal limit of 1320 pounds against an empty weight typically below 800 pounds, and it holds a useful 24 gallons of fuel, with 28 optional. In addition, the 750 can use a wider range of engines than the 701... unlike a lot of kit manufacturers,
Zenith accepts that builders will try alternative engines and does what it can to help them."
Kitplanes magazine editor Marc Cook concludes the six-page story with: "I congratulated Sebastien Heintz for thoroughly updating and evolving his father's designs without bringing them too close to the center. Zenith builders are proud of the ways their airplanes are different, and the company is smart enough to not take that away from their crucial point of origin." 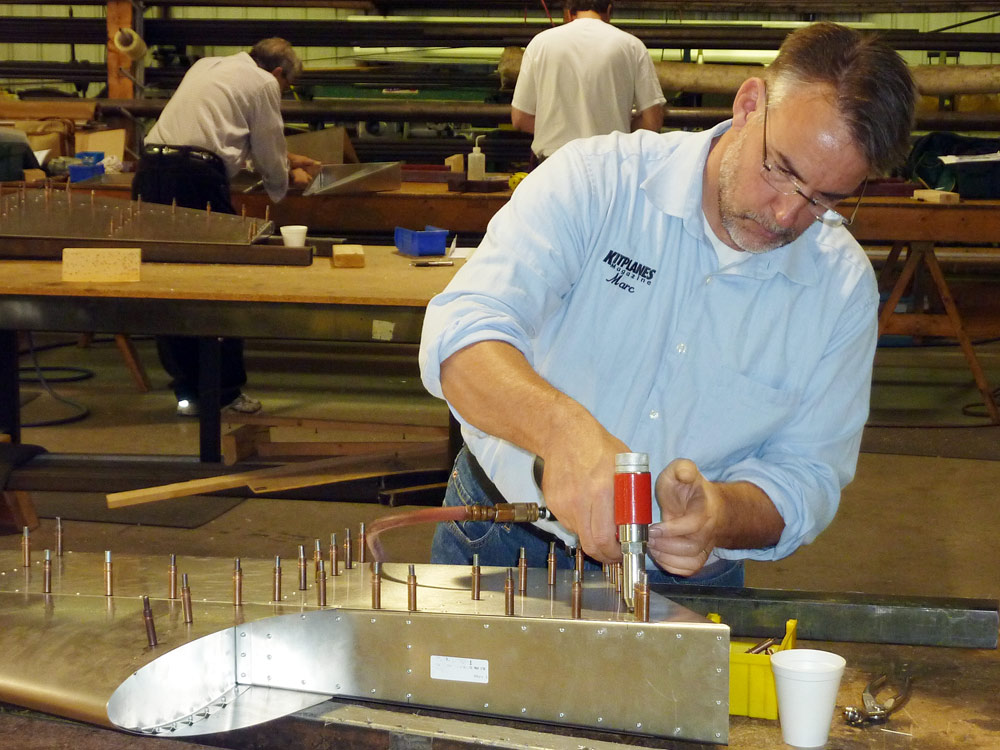 As part of his visit to the factory, Marc Cook also actively participated in the Zenith factory workshop, building his own rudder tail section.  The editor of Kitplanes magazine explains the workshop "is about more than the tools or the rudder. Two leisurely days spent at the factory will give you an opportunity to see how the company works, fly one or more of the demo aircraft and get a sense of its manufacturing ethos. Here I would describe Zenith as modest but thorough. The young woman who does the bulk of the welding has impeccable credentials-though she wouldn't be drawn out on whether women create neater beads than men-and I was happy to see quite a lot of test apparatus, including a jig for pressurizing and testing each and every welded-aluminum fuel tank produced. 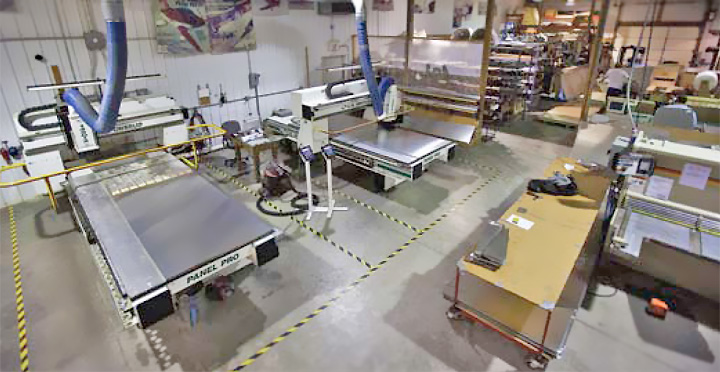 "...from the visitor's standpoint [Zenith] is also very laid back. I got no sense of the hard sell, even though a couple of the attendees were there to determine whether they wanted to build a Zenith or something else. Another participant, who had never built anything before, was there as a jump-start to his own CH 750 project. Imagine his delight in seeing the birthplace of his kit, the components of which were neatly crated and prepared for him to trailer home that weekend.

"When you get your design choices down to a few, please cash in your airline rewards and go for a visit. It's the only way to know if you'll like the company as much as you like the airplane."